this will be possibly the last article about the Panther, as we covered pretty much everything that looks like an interesting option for the Panther. Only one “specialized vehicle” is left: the Turbo Panther. Of course, that’s not its real name, that’s a name SerB used for it. You see, SerB admitted (several times in fact), that there is a possibility (not guarantee), that the E-50 and E-50M will be merged into one vehicle on tier 10 (with rear-transmission E-50M being an optional hull for the E-50) and on tier 9, it might be replaced by something called “Turbopantera” – “the Turbo Panther”.

What is meant by that is most likely the gas turbine Panther. This topic has already been covered and there is a pretty good article on Wikipedia (it’s good mostly because its content is practically copied from the A.Kay’s book German Jet Engine and Gas Turbine Development 1930-1945).

To sum it up for you, the Germans developed several versions of the a gas turbine, with the original GT101 (1150hp) being designed in November 1944 and follow-up improved versions (GT102 and GT103) being worked up till April 1945. No prototype was ever completed apparently, but the design was sound. In real life, it was however far from a practical design: the technology was not properly tested and it had significant drawback, such as more than double the fuel consumption of the Maybach engines, which was not sustainable for wartime Germany, suffering from the lack of fuel even for its conventional engines. In later GT versions, this was somewhat mitigated (from 200 percent fuel consumption to about 130 percent), but nonetheless the gas turbine is possibly the most fuel-consuming engine type even today. Another significant drawback would be low torque in lower RPM ranges, resulting in potentially poor acceleration, when the vehicle was standing or idling. Naturally, such revs would also pose a significant strain on the transmission (a special ZF transmission was prepared by Zahnradfabrik for this type of vehicle with three clutching levels in the torque converter and twelve speeds).

Naturally, these characteristics would have to be somehow modelled in World of Tanks. I doubt Wargaming would model the different acceleration (torque) curve for one vehicle only (and I doubt any other gas turbine vehicles would make it into the game, the only other one I know of that would fit was the experimental turbine Patton), so what we potentially have here is an engine with a massive horsepower rating (1150hp), but this will possibly be compensated by high engine vulnerability: either a very high fire chance (50 percent perhaps), or with very low engine hitpoints. Or possibly both.

Since such a vehicle would exist no sooner than in late 1945 (if at all), it is reasonable to assume it would be based on the Panther F chassis. I recently wrote about the Panther Ausf.F in an article, so if you are interested in details, I will refer you there, but basically, it’s a Panther Ausf.G hull (80mm upper frontal plate, 50mm LFP, 50-40mm sides) with its historical Schmalturm (120mm frontal plate – basically what is now in game as Panther’s Schmalturm) and with some minor improvements (slightly thicker engine deck and hull roof for example). This platform could go as fast as 50km/h, so this vehicle, despite its massive horsepower, would not be a race car. Horsepower however does influence one more thing: agility (if you want to know, what happens, when a tank, that’s very agile on paper gets a weak engine, go check the Chi-Nu Kai). This configuration has a huge potential to be one of the most agile tier 9′s. In real life, of course this would be problematic: the final drives were not too good as it was and without some serious improvements, the tank would not be practical, there would possibly be huge maintenance issues. But in WoT terms it doesn’t matter that much.
The armor of the vehicle could of course by improved by the Schürzen, the anti-AT-rifle side armor. In World of Tanks there are no AT rifles (at least not in their infantry form), but as a “HEAT detonator” (in WoT, not in real life), it could add some protection.

Now we are reaching the potential weakspot of such a vehicle (especially on tier 9). You see, there were only two guns ever planned for the Panther: the 75mm L/70 (the Škoda KwK 44/1 for the Schmalturm and KwK 44/2 – a model with a casette autoloader) and the 88mm L/71 (mind you, NOT the one that’s on Panther II, there was a proposal for the re-arming of the Panther, refer to the Panther F article, last part for details, but basically, Daimler-Benz proposed in January 1945 a Schmalturm version with the 88mm L/71, the project never progressed beyond wooden mockup).

Forget about the 75mm L/100, that was just Hitler’s pipe dream (it was proposed very early on – in January 1943 – by Hitler, who didn’t understand the way guns and metallurgy work and simply wanted longer guns and faster shells with no regards to the cost or limits, the whole project got probably silently dumped very soon afterwards). Historically, we don’t have that much to work with then. After all, the 75mm L/70 is too weak for tier 9.

Let’s have a look at how it could be improved. First, an autoloader. A project (KwK 44/2) was actually made to incorporate a semiautomatic loading assistant device. While the device allowed the loader some significant time saving,it wasn’t an autoloader in World of Tanks terms. Spielberger claims this device allowed for 40 RPM. Allegedly according to some sources (V.Francev), one autoloaded KwK 42 prototype with a casette-type loader was made and tested after the war by Czechoslovaks on a captured Tiger II. According to Doyle, it was supposed to be ready around April 1945.

But that’s just an autoloader, we still have the penetration issue here. For tier 9, both the L/70 and 88mm L/71 are simply too weak. So, what can we do? Well, for starters, we could introduce unhistorical guns into Panther, but that’s not a good way, besides, there wasn’t much that could fit the Schmalturm, certainly not the 128mm (even Tiger II (E75) with 128mm is just fantasy, in real life it wouldn’t fit).

One option would be the 10H64 (10cm PAW 1000), a smoothbore high-low pressure gun (or, more precisely, a thrower) the Germans experimented with. This thing would have 200mm penetration at any distance, but there are issues with it. For one, it’s smoothbore and – although historical – this is not allowed in WoT. Secondly, there was never a project to arm the Panther with it. Third issue is that we already have the 88mm 43, so we don’t need another gun of roughly the same performance, that was designed not to have superior firepower, but to be as cheap to mass produce as possible.

So, there are no historical guns available for Panther, that would support it on tier 9 (remember, current E-50 guns are just fantasy), so we’ll have to work with what we have. I imagine the setup like this:

Too weak for tier 9? Well, let’s kick it up a notch. For starters, we’ll start using the the gold ammo (APCR ammunition, subcaliber Panzergranate 40) as regular ammo. That’s how we get respectable 194 (75mm) and 237 (88mm) penetration. And gold ammo? Well, that’s the real trick. Enter the Pfeilgeschoss type ammunition, or Panzergranate 44, commonly known as APFSDS.

Yes, the Germans did develop the armour-piercing fin-stabilized sabot rounds from tungsten alloys. Very little is known about them, but I do think Hogg mentions them in his German Artillery book. Discharging sabot German ammunition (known as the Treibspiegel, or TS) is well known overall (for example the 150mm sFH 43 TS rounds, consisting of a 88mm core in a 150mm shell), but mostly it was not used for AP rounds, it was used to extend the range of German artillery (HEDS rounds). If you are interested in this, I wrote about this here in more detail.

Another type of the German sabot ammunition were the Pfeilgeschosse (“arrow shots”). These things were developed by Krupp first for 37mm PaK 36 and were also known as the PPG (Peenemünder Pfeilgeschoss). This is how the ammunition looked for the 37mm gun (compared to the regular APCBC ammo): 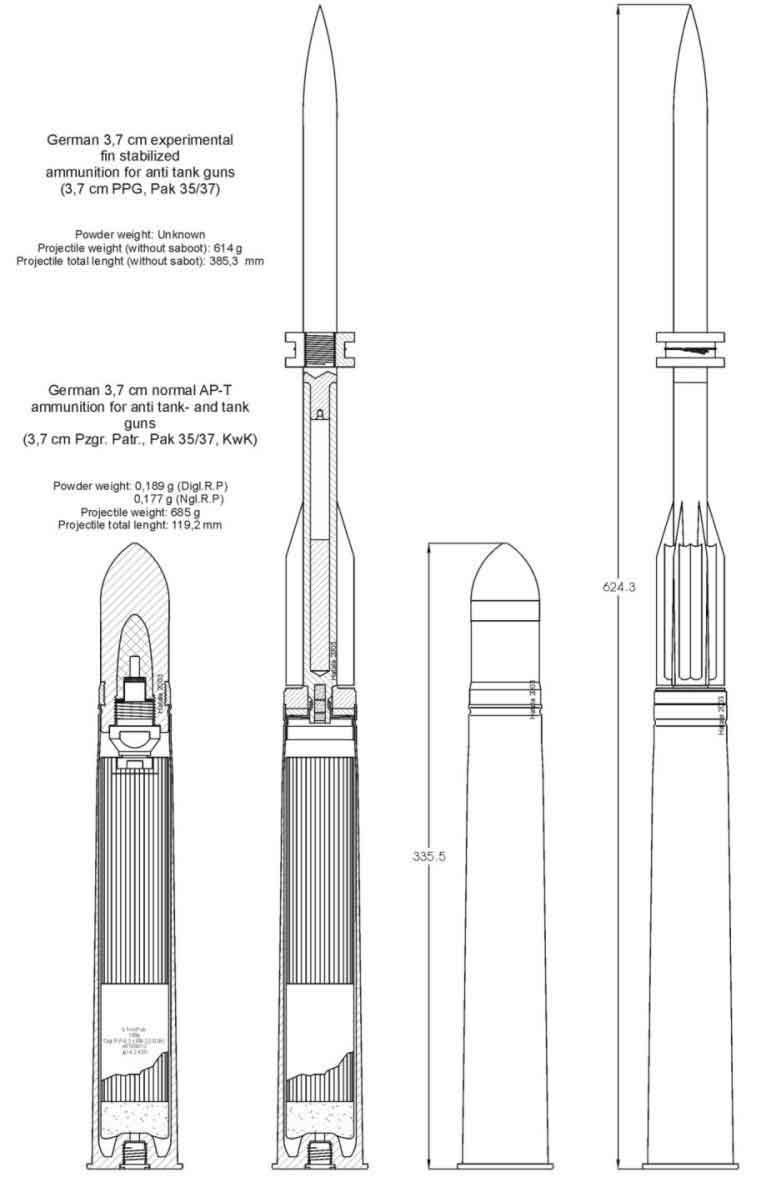 Now we are getting to the pretty obscure stuff. There is not much info on the Panzergranate 44, apart from Hogg I think. The core was allegedly a tungsten alloy, but some sources state it could simple have been hardened steel. Such rounds were allegedly tested by Krupp, with following results:

Naturally, this can be tweaked (as in, “let’s say they used something softer and not the tungsten alloy), but you can see where this is going. A perfectly usable (and historical) gun and ammo for a tier 9. What I imagine it could look like is this:

Anyway, this is just an idea how the historical vehicle could look like. There is no point in inventing various fantasy guns. While very limited info is available on the Panzergranate 44, I think WG could work with that. Before you go bashing the OP combination of an autoloader and a powerful engine, please keep in mind that this vehicle has quite thin armor. In fact, it has thinner armor than current tier 7 Panther, as ingame Panther’s frontal plate is 85mm thick, while in real life it was just 80mm. In the ingame setup, of the vehicle weights were kept, it would get 25,19 hp/t however and that’s a LOT. I think it could work.