there seems to be a lot of confusion about the Panther and its historical properties. Partially, it’s because it’s such a legendary machine and partially simply because it’s German and – for some reason – over the decades since the WW2, numerous hoaxes, legends or simply confusions sprang up about the possible Panther upgrades. 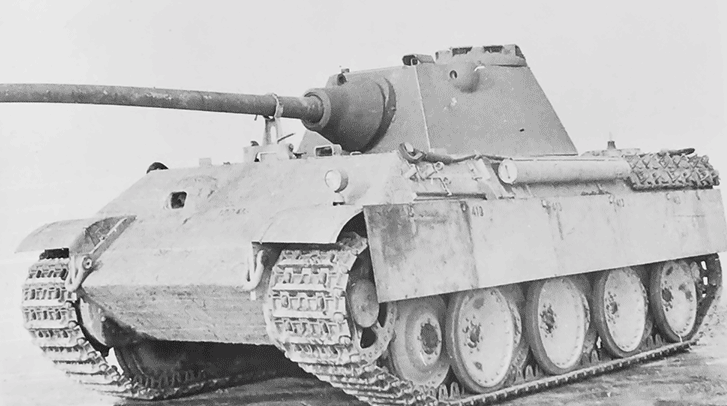 Panther Ausführung F (Ausf.F or Panther F) was to be the ultimate evolution program for the Panther vehicle. Its prominent feature was supposed to be the Schmalturm (narrow turred) depicted above (however, the picture does NOT show Panther Ausf.F, it’s a regular Ausf.G hull with second version of Schmalturm with S.Z.F.1/1b targetting device).

Now would be a good time to actually make a thick line between realistic, designed and proposed upgrades for the Panther. Panther F was a concept incorporating various improvements, but it was NOT to have everything that could be mounted in a Panther. For example, the German GT series gas turbine was also intended for a Panther, but not specifically for Panter F, it was an experimental program only and it was never meant for serial production.

Back to Panther F then: the need to upgrade the Panter goes as far back as 1943, when it was recognized that the thin sides of the Panzer IV and Panther tanks are too vulnerable to the anti-tank rifles, that were punching thru them, wounding or killing crew and destroying internal equipment. Since these AT rifles were issued in huge numbers on the eastern front, the designers thought of way how to counter them. The obvious one was to increase the side hull thickness, which led to the Panther II development – it was later rectified by the Schürzen side armor for much lesser cost (one of the great myths is that Schürzen were to protect against HEAT – they weren’t, they were designed to counter AT rifles) and Panther II project became obsolete, but not before producing some interesting parts, usable for regular Panthers. However, the Schmalturm was not one of them.

The initial idea that Schmalturm was to be used for Panther II came from W.Spielberger – later research by T.Jentz however showed, that the turret that was to be used was a modified Panther Ausf.G turret.
The Schmalturm was developed independently and was considered for both the Panther and Ausf.J Panzer IV

There were several versions and its evolution could cover an entire article by itself, but that’s a story for another time. Its full name was “Turm mit schmale Blendenausführung” and first drawings were dated to 7.11.1943.

This is another spot where we should stop and explain one thing: in the books by Walther Spielberger, otherwise very well renowned author, there’s a drawing of Panther II with 88mm L/71 in a Schmalturm. This was not realistic, it was Spielberger’s mistake (one he later actually rectified) and Tom Jentz (who worked closely with H.Doyle) called him on that. By the time Panther II was projected, not even first Schmalturm design proposals were laid down, Panther II was simply never intended to have this turret or this weapon. The Schmalturm mit 88mm L/71 proposal came in fact much later, in December 1944 and it came from Krupp (but it required some modifications, like 10cm larger turret ring). It is ironic that while the Americans were critisized for putting a regular Ausf.G turret on the Panther II chassis (currently sitting in the Patton Museum in Fort Knox if I recall correctly), it his in fact more historical look than the Schmalturm Panther II. This is how it would have looked in real life, according to T.Jentz:

Back to the Panther Ausf.F.

While the previous new type of turret was developed by Rheinmetall, it was not exactly successful. The turret development was then (in February 1944) moved to Daimler-Benz, where the name “Schmalturm” was invented. There were several goals for the development, as defined by Waffenprüfamt 6:

- to eliminate possible shot trap under the mantlet
- to increase the protection without increasing the weight of the turret
- to reduce the turret frontal plate size as much as possible while keeping enough room for the crew to work in
- to add a stereoscopic rangefinder
- the usual MG34 machinegun was to be replaced by MG42
- to make the turret easy to convert for command tank version (Befehlpanzerausführung) and for IR device installation
- to keep the common Panther turret ring diameter (1650mm)
- to make the whole thing easier and faster to produce
- and, last but not least, to make it cheaper

This new Daimler Benz design was to be mounted on Panther G hull and this combination was to be redesigned to Panther Ausf.F – yet another stop here: there are people on various forums spreading “ideas” that the Panther F was to be some sort of “super Panther” with massive armor increase. It wasn’t. The Schmalturm was a way to actually decrease production time, save money and simplify the production as much as possible. The armor was that of the regular Panther Ausf.G (80mm frontal plate, 50mm lower frontal plate, 40-50mm sides) with Schmalturm mounted on it (150mm mantlet, 120mm turret front, 60mm turret sides and 60mm (Spielberger) or 40mm (Jentz) turret rear). The hull was only slightly modified – the hull top thickness increased to 40mm and the engine cover was 16mm thick.

In order to accomodate the powerful (and completely sufficient for its time!) 75mm L/70 gun, modifications had to be made. Škoda (Czechoslovakia) developed a new version of the KwK 42, designated KwK 44/1 – with shorter recoil mechanism, allowing the Schmalturm to have +20/-8 elevation/depression. The muzzle brake was also removed. The turret was rotated hydraulically, allowing for full traverse in 30 seconds. It had a modified commander’s copula (it was made lower). Originally, T.Z.F. 13 periscope targetting device by Leitz was proposed, but the series vehicles were to recieve the S.F.Z.1 devices (5 prototypes were made by the end of 1944). Furthermore, the Schmalturm was to be equipped by a stereoscopic Zeiss rangefinder (1320mm wide), but the prototypes were not finished before the war was over.

There were some further modifications, like the improvement of the crew hatch shapes. The vehicle was to be powered by a 700hp Maybach HL230 P30 engine, allowing it to go as fast as 50km/h. It carried the FUG 5 radio station and could mount the FG1250 infrared device. In February 1945 it was decided that the vehicle would have only whole-steel roadwheels – no rubber.

The vehicels were to be produced by MAN, DB, Krupp, Niebelungenwerk (Porsche’s playground) and M.N.H (Maschinenfabrik Niedersachsen-Hannover GmbH). Some reports state that several hulls were actually finished in the final days of war by Daimler-Benz in Berlin and (with Ausf.G turrets) actually fought between 20.4. and 23.4.1945 with II./Panzer-Regiment 2, fighting the Soviets near the Daimler Benz factory. Two turret prototypes were captured, one was taken to the USA after the war and one was taken to Great Britain, where it was used for target practice (its remains are in Bovington today). 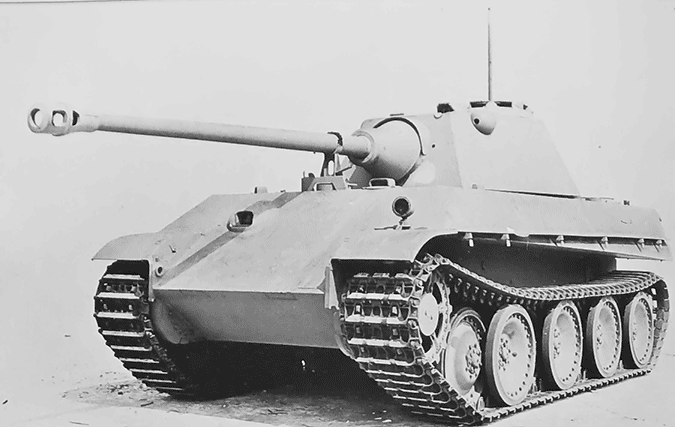 You can’t have Panther F today in World of Tanks, because the Panther hull on tier 7 has unhistorical armor (85mm frontal plate instead of 80mm), but you can get close by mounting the top engine (albeit incorrect designation) and Schmalturm on Panther along with the stock gun (75mm L/70): 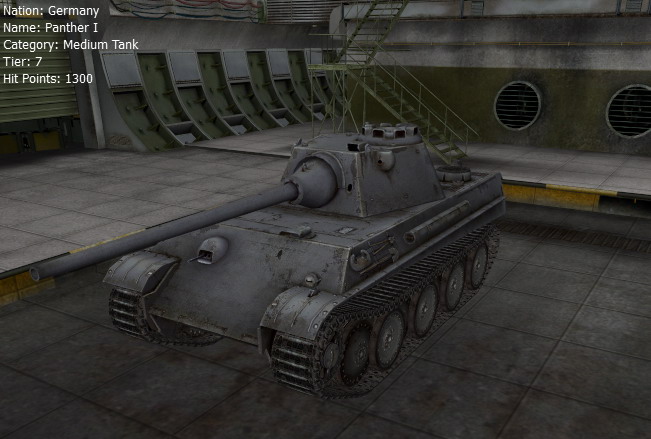 Of course, the Panther F would make a fine tier 7 premium vehicle (if it had its historical armor that is). Yes, it would be a copy of one of the Panther variants, but I think it would still be nice.

What is not a Panther Ausf.F

There however have been various other (more or less – often less – realistic) upgrade proposals for the Panther. These are NOT a part of the Ausf.F program, no prototypes were mostly made or tested and most of them were born of desperation. These upgrades include:

Further upgrades were also considered, but even the Germans admitted these were simply a “wish list” and most fall into the “pipe dream” category:

Furthermore, in January 1945, a Schmalturm for Panther with KwK 43 (88mm L/71) was proposed by Daimler Benz. The first drawing of the DB turret actually comes from 18.10.1944 and based on that, DB recieved a contract to develop this variant and it was in January they presented the results. It was to have a -8/+15 elevation and depression and was to be equipped with SFZ2 or SFZ3 stabilized gunsights. And all that while the whole thing weighted only a ton more than the current Panther turret. However, the work on that never got beyond wooden mockup, that was found in the DB plant after the war. 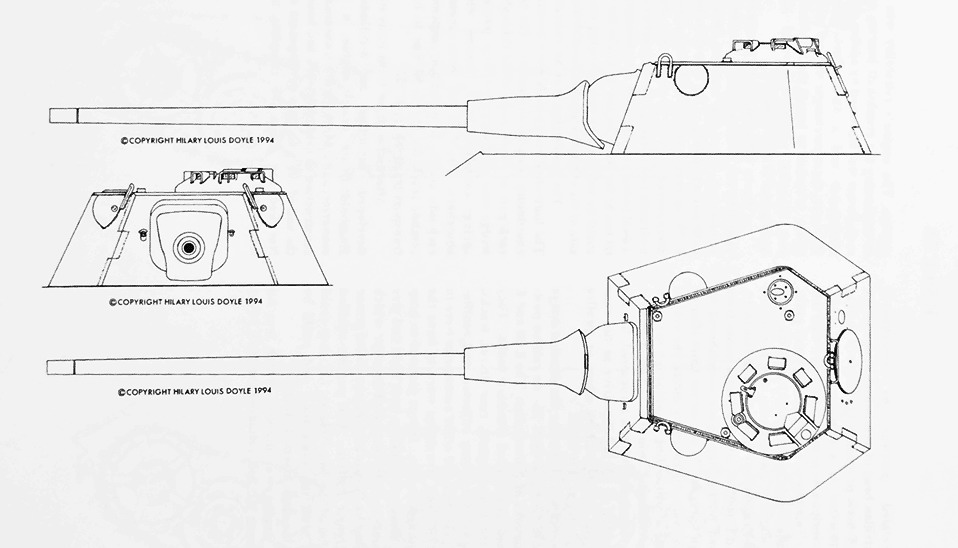 And last, but not least: the gas turbine. There is a decent article about it on wikipedia. Basically, the Germans developed gas turbines, that could fit into a Panther. GT101 produced 1150 horsepower, but at the cost of high maintenance and almost a double fuel consumption. As such, the project was unreasonable even by German standards.