On January 2nd, 1945 the US Army Ground Forces Equipment Review Board outline requirements for a new class of tanks, and on June 20th they reported that they suggest that American Armored Forces have a 25 ton light tank, a 45 ton medium tank, a 75 ton heavy assault tank, and wanted to research a 150 ton super heavy tank. In 1946, the Stilwell Board dropped the plans for the 150 ton vehicle along with tank destroyers and had American tank development loosely follow the requirements set forth by the AGF up until requirements changed in the year 1950.

So first off lets discuss the 25t vehicle. The AGF’s 25t tank was to replace the M24 which was inadequate, especially in the firepower department. The proposed gun was to be a 76 mm cannon that was to penetrate 127 mm @ 914 meters against a 30 deg. sloped plate. Mobility was also suppose to be better than the Chaffees.  I actually mentioned this project before in this article, because the AGF’s 25t proposal quickly developed into the T37 and later into the M41 Walker Bulldog.

The 45t vehicle had some interesting features. First of all the armor protection was very thick. The frontal hull was to have 203 mm thick armor. There is some ambiguity whether this is to factor in slope or not. The gun for this 45t tank is also very interesting. It was to be a high velocity 76 mm cannon which could penetrate 203 mm @ 914 m against a 30 deg. sloped plate. I have concluded that this penetration requirement refers to HVAP shells rather than AP, but I could be wrong. The gun was also to be stabalized and was to have a rangefinder. Another interesting piece of info is that this gun was to have an autoloader, but was to retain all 5 crewmen. The 45t vehicle was to have a remote controlled bow .30 cal MG as well as .30 cal “blisters” on the side of the turret. 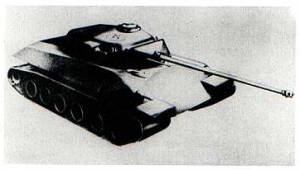 The 75 ton vehicle was another oddity. This behemoth was to have 5 crew members and was to have a top speed greater than 30 km/h. The main gun was requested to be a 90 mm gun that could penetrate 267 mm @ 1828 meters against a 30 deg. sloped plate with HVAP shells. This is ~100 more mm than the T15E1/T15E2 guns in the same conditions with HVAP shells. Accuracy of the 75t tank was to be excellent. Reasonable accuracy was to be maintained up to ranges near 3.5 km. The armor of the vehicles was to be equal to at least 267 mm at zero slope. 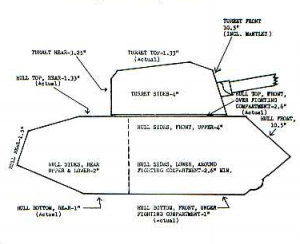 I have touched on the 150 ton project before, but I forget which article I mentioned it in. Anyways the 150t vehicle was to be armed with anywhere from a 105 mm gun to a 155 mm gun. Whatever gun was mounted, there was to be a duel autoloading system(as in the T22 medium tank) for quick changes between ammo types. A stabilizing system was also to be used. Armor was to be as heavy as weight and mobility requirements allowed. The conceptual art featured in the June 20th report had a semi-trailer layout which was thought to be necessary for transportation for a 150 ton vehicle.

In the title I called these tanks the American “E Series”. One can make parallels between the AGF’s proposals and Wa Pruef 6′s proposals for tanks based on weight class. Both projects had some actual vehicles built like the T37 and parts of the E 10, E 25, and E 100; but a large amount of these projects’ attributes remain shrouded and ambiguous. I would also like to say that the AGF likely never took the E Series into consideration when coming up with these requirements. It is just a case of two groups coming up with somewhat similar solutions to somewhat similar problems.