this post contains my take on the new 8.9 tank destroyers, from tier 4 to tier 7 and my experience with them. I hope you enjoy it and find it useful. Obviously, the post is written from my point of view and it’s subjective. I like German tanks, I love tank destroyers and I think I am reasonably good with them, so I guess I know what I am saying in this case. I was running the tank destroyers with following equipment: camo net, binoculars, rammer – and with a 3-perk crew (with full camouflage skill). Let’s get to it. 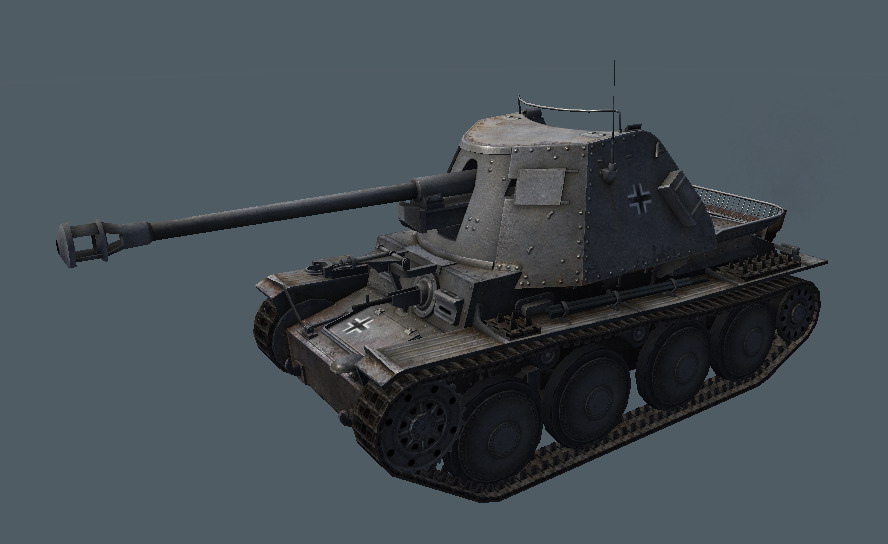 Marder 38T (I somehow always refer to it as Marder III) is the new tier 4 tank destroyer. You can find the data on it anywhere, so I won’t get into hard data much and will focus on how much fun I had playing with it. Players actually sometimes complain about it – they cite its poor armor and “bad” gun as its main drawbacks, but I think that’s crap. This vehicle is possibly the best tank destroyer on tier 4 and certainly the one I ever had most fun with.

Don’t let the lowpen guns fool you – they are completely sufficient for its tier. You won’t be meeting anything heavier than tier 6 anyway and if you aim properly (obviously, aiming at the front plate of KV-2 is not the most brilliant idea) you will have absolutely no problem. The DPM is amazing (the gun fires very fast) and the wide gun traverse arc ensures you don’t have to move your hull much when you switch targets. This is extremely important on a tank destroyer, as moving the hull instantly makes you dump 40 percent of your camo – and when you add the camo penalty for shooting, you might get spotted.

Fortunately, that doesn’t happen often. Marder 38T is very small and despite its height has very good camouflage. You won’t get spotted easily, if you use bushes properly. Another quality that is easy to get used to is the viewrange – this vehicle sees far, even without binoculars. That’s very important – since you need to keep the enemies at distance. Why? The armor. Or rather, the lack of it – on your tier, pretty much everything penetrates you (that seems to be the hallmark of the entire line, but starts to be a problem only at tier 7). Fortunately, the vehicle is very, very fast and agile. That, combined with very quick aim time (1,5s!) means you get to fire off few rounds and quickly move to cover. Very useful. Of course, you can snipe too – the top gun is reasonably accurate (0,35) and the shells fire rather fast. Gold ammo is actually almost an overkill for it and I never felt like needing it – the guns are very adequate for its tier.

I found the best tactics for this vehicle (apart from the obvious sniping) is quick hit and run tactic – combined with flanking. The tank doesn’t attract too much attention in battles (“meh, Marder…”) – which is a huge mistake, if left unchecked, it will devastate pretty much anyting short of massed heavy tank frontal assaults. Only two things caused me somewhat trouble. First is taking tier 6 heavies head on (you have to aim carefully and know exactly how soon will they spot you so you can take cover before that) and the other is dealing with mediocre depression.

So, if you want to survive and enjoy it, here are a few tips:

- do not move your hull unless you have to, use your camo to full advantage
- don’t take tier 6 heavies and derp vehicles head on unless you know exactly what you are doing – derp Sherman, Panzer IV or even Hetzer can oneshot you
- you are not a tank, you don’t lead assaults, stay back
- bushes are your friends, you are small enough to fit behind most of them
- carry a few HE shells to deal with other Marder vehicles, they are HIGHLY susceptible to them, in a face-off, loading HE can mean life or death

Overall, apart from the armor, the vehicle is very comfortable to play with. If you find the lack of armor to be a problem, you are doing it wrong.

Oh, right, the camouflage. What I noticed about the camo:

- if you camp on the Redshire ridge (both in fact) behind bushes, you are practically unspottable, but you won’t be able to see the other ridge properly (viewrange). It’s better to setup yourself on the flanks (specifically the part of the northern base ridge overlooking the western access.
- Prokhorovka: if you stand on the western road behind two bushes in a row (easy), you are again practically unspottable, yet your traverse covers the entire road and part of the middle. Very useful.
- Malinovka: it’s safe to stay behind the bushes next to the big stones on the northern base UNLESS you move. If you move and shoot in sequence, you will be spotted by any light or medium tank that makes it to the half of the field. Very important is to set yourself up properly in advance.
- Arctic: on the ledge near the southern base (G4) you are again pretty much unspottable, unless a scout makes it very close to you
- Steppes: if you wait at the base and cover the middle road while hidden behind a bush, you won’t be spotted unless the attacking tank driving on that road makes it roughly two meters behind the stones and you fire or move your hull, on tiers 4 and 5, it gives you enough time between spotting and you being spotted to knock that tank out, but not if it’s a tier 6

Well, that’s it. Overall, I think it’s possibly the second best of the mid-tier 8.9 tanks (Nashorn is better, but we’ll get to that).