okay, this is a bit weird. A lot weird in fact. Now, I am not a cyberspors expert, so I am not really familiar with all the rules and their interpretations, but even to someone like me, kicking out an approved ESL team sounds fishy at best. And that’s what apparently happened. A case of corruption in ESL league?

In the Go4WOT ESL cup 137, Virtus PRO (Russian team) was disqualified in its fight against Virtuti Militari_7team (apparently for non-attendance):

The admins accepted the result and did let Virtuti Militari_7team (a Polish team). Initial situation:

As you can see, Virtuti team is on second tier. Gogo Power Rangers team (rofl) won too, confirmed by administrators:

And then, without any warning, guess what: Virtuti team was kicked out and replaced by Virtus PRO. You know, the same Virtus PRO Russian team, promoted by Wargaming. Because that’s what European Sports League (as in, EU server one) needs: Russian teams.

And this is how the situation was in the end: 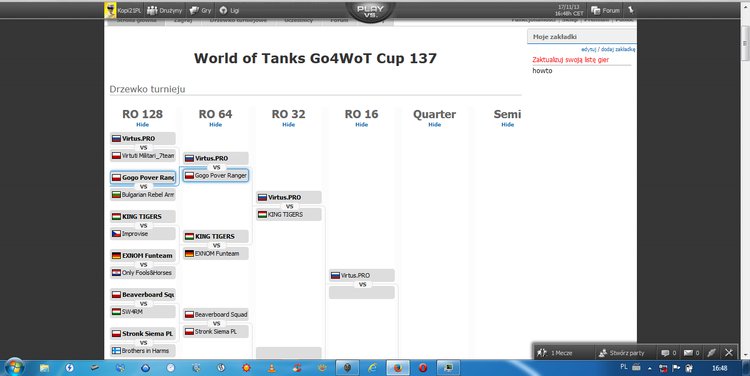 After being loud, the representatives of Virtuti team were told to write a support ticket. The thing is, they did, yet nothing happened.

Oh, yes and final insult? Virtus PRO got into finals.

Edit: The situation apparently got resolved to Polish team’s satisfaction.

In an answer for our ticket – ESL Admins apologised us for the whole situation and rewarded us for our participation in ESL go4wot #137. In our opinion it’s fair and it ends the “story”.