No version of the Soviet tech tree features a captured PzIII (or T-3, as Soviet documentation called it). However, a number of vehicles are based on it: the SG-122, SU-85I, and the somewhat recently announced SU-76I. Let’s take a look at these vehicles and the vehicles they were based on from the Soviet point of view.

Unlike the lukewarm reception of the Panther, the PzIII was very interesting to the Red Army. An early modification of the tank was received after the Polish campaign as a part of a deal with Germany. The 37 mm gun was laughable by standards of the time, but Soviet military minds and engineers appreciated many features from the vehicle: its commander’s cupola, torsion bars, shock absorbers. Various components of the T-50 light tank were inspired by these features.

After the Wehrmacht poured over the borders of the USSR, the Red Army captured a number of new and improved PzIIIs, with modern 50 mm guns. This new vehicle was tested extensively. The results of the testing showed that while the tank wasn’t as fast as the Soviets’ own T-34, and the gun not as powerful, it was still a very good vehicle, worthy of the Red Army’s attention. You may recall that the flamethrower modification of the PzIII alone earned more pages devoted to it in Soviet technical reports than the Panther.

As the tank was comfortable to use, available in great numbers, and had a powerful enough gun to deal with enemy tanks, Soviet tankers happily used it whenever possible. Depending on the time available, the tanks went into battle with very small changes to original markings, or a complete repaint job, with red stars, hammers, sickles, and a stylish coat of olive drab to match its domestic comrades. Less conventional methods, like red ribbons tied to the antenna or red cloth hanging from the hatches were also used. 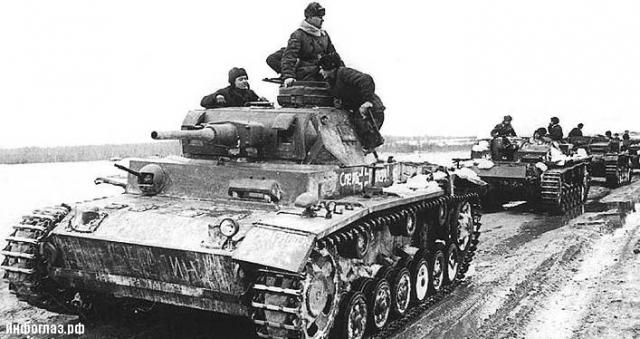 A freshly captured PzIII. The Balkenkreuz is still visible on the side, but the “Death to Hitler” and “To Berlin” slogans leave little doubt when determining the vehicle’s current owner. 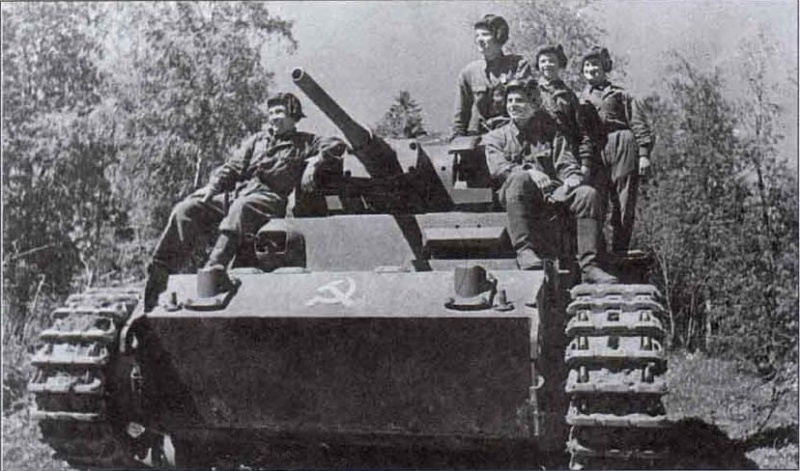 Nikolai Baryshev and his crew. The captured PzIII is painted in olive drab and has Soviet insignia on it. 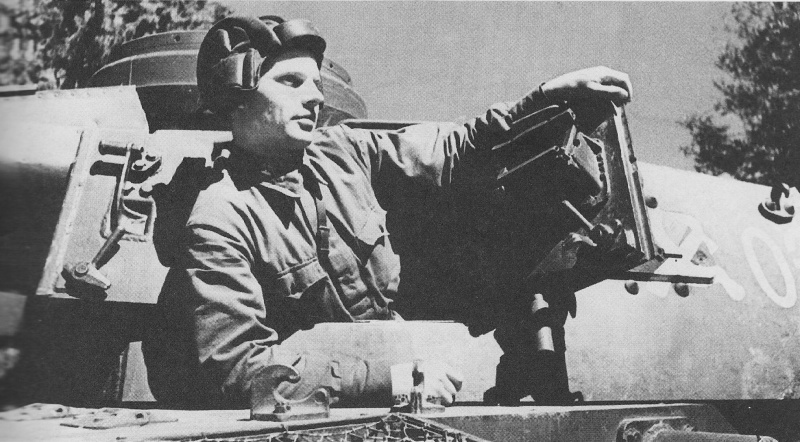 Baryshev leaning out from his tank. Soviet insignia and a new tank number are visible to the right of the image.

The StuG was also well received by the Red Army. Unlike the Panzerwaffe, Soviet armoured force commanders had no aversion to turretless vehicles. The StuG (or Artshturm in Soviet documents, “artillery-assault”) was used from 1941 until the end of the war (unlike the PzIII, which waned in popularity after 1943). The first recorded use of such trophies was in the defense of Kiev, when two StuGs were captured from the 224 assault division. Another interesting episode happened in the battle for Smolensk, when Junior Lieutenant S. Klimov lost his own tank, and his crew transferred to a captures StuG. They were quite effective in it (eat your heart out, WoT crew training system!), earning an Order of the Red Star for Klimov. 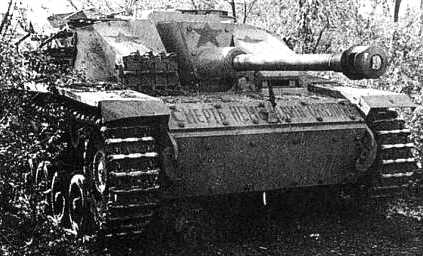 A captured StuG, used by the Red Army. The slogan on the front reads “Death to German occupants!” In order to reduce the odds of being shot at by allies, the vehicle is absolutely covered in red stars.

The number of red stars was often not enough. M. Svirin’s book on this vehicle describes an episode where a T-70 tank opened fire on a StuG III from the two batteries that were supporting the 3rd Guards Tank Army. No one died, but the T-70 crew was beaten by the infantry riding on top of the StuG.

Guards-Captain M.F. Pafnin spent half of the war fighting in a StuG, from April 1943 to the very end. He progressed from a commander of a platoon, to a commander of a whole StuG battery. He recalls how these vehicles were used.

“All assault guns in the unit were painted green, sometimes green and brown, in the summer, white in the winter. We did not try very hard in the winter; the dirtier the paint was, the better, but in the summer, we painted thoroughly. We tried to fight in German camouflage with stars on the sides and front, but there were cases when we took fire from our own. The side screens got in the way, we threw them out. However, we kept them in the city. There was no better protection from Panzerfausts.” Aside from the red stars on the front, the StuGs also carried names of famous Russian commanders in white or red paint, a Guards insignia, and a large red star on top, to prevent friendly fire from ground attack aircraft. Pafnin had a very high opinion of the vehicle: “An excellent SPG. Comfortable to work in, good sights and observation devices, reliable, but the operational range is quite low.”

Now, on to the vehicles that will be appearing in the game! Let’s go in chronological order. First, we have the SG-122(A), more commonly known as just SG-122. The Red Army had plenty of M-30 howtizers, but, due to a shortage of artillery tractors and horses, these guns weren’t very helpful to anyone. One solution was to mount the howitzer into a captured tank. The PzIII seemed like a very good chassis, until trials against the same thing mounted on a T-34 chassis, that is. The T-34 version was deemed superior, and entered production along with the SU-76.

The SU-76 is where we see the PzIII again. The SPG kind of sucked. Meanwhile, the Red Army still needed a 76 mm SPG. The result was the SU-76I (and not i or (i) like in some Western sources). An F-34 gun from the T-34 was mounted in a fixed casemate on top of a PzIII or StuG (for very few units). This was a fairly successful project to buy time before the SU-76M could enter production, successful enough to warrant an 85 mm sequel. However, there was no need for a SU-85I, as domestic SPG production was already up to speed.

SS already dug up the characteristics of the SU-76I, so no point in speculating on that, but the SG-122 is up for grabs. Let’s do some fortune telling.

Since both donor vehicles (the SU-85 and StuG III) are tier 5s, it will likely be a tier 5 premium. The chassis will not change, aside from the wider tracks, which should improve terrain resistance. This is good, since as a premium tank, it’s likely going to be shafted when it comes to the engine. The mass of the M-30 howitzer won’t be reducing performance either: at 1600 kilograms, it’s a lighter option than the popular 10.5 cm StuH (2100 kg) or even the top 75 mm PaK 42 (1740 kg). Due to a loading assistance device, the rate of fire should improve from the 5.26 RPM the SU-85 currently has. Svirin credits the SG-122 with 7-8 RPM. The choice of the radio doesn’t matter much: the 9R and FuG5 have very similar range in game. Unfortunately, at 35 mm of front armour, it is much less protected armoured than its German (80 mm) or Soviet (45 mm at 50 degrees) parents. This disadvantage is unlikely to be enough to earn this vehicle preferential matchmaking.

10 thoughts on “Soviet PzIIIs and Derivatives”