ever since last year, a lot of people waited for the tier 8 German light tank, called RU251. It was supposed to come along with the Aufklärungspanzer Panther (I think that was in April 2013 or so), but it didn’t. The reason it didn’t come is quite simple – there was not enough info about it. Originally, it was believed that the prototype was located in the Munster tank museum, but that proved not to be the case and the museum basically told Wargaming to sod off, not revealing any documents about it (it is believed that they don’t have any anyway). That was like second half of 2013 and ever since, it seems nothing else was found either. The prototype somehow managed to disappear off the face of the Earth and very little new pieces of information were uncovered. And so the time went on – and suddenly, the German scout line is almost a year old and nothing happened.

Maybe… maybe it’s time to start looking at alternatives, what to replace it with. Make no mistake however: this is no easy task. There are very few candidates, that could actually fit the slot. Certainly no wartime projects. The 38t hull with Panzer IV turret would be completely inferior to any other tier 8 light tank. There is the highly speculative Aufklärungspanzer auf E-25, but that is simply a theory (no plans or mentions per se were ever uncovered). We have to look for the candidates after the war.

As for myself, the only thing I found is the Spähpanzer SP I.C.

The Spähpanzer (“recon tank”) SP I.C is a pretty obscure prototype from early 60′s. Basically, what was going on – after its reformagion, the West-German armored forces (the Bundeswehr) were looking for potential recon vehicles. One of these proposals was to actually build a light tank on the Schützenpanzer chassis. The basic idea was that vehicles like the wartime Puma armored car (equipped with powerful weaponry) were quite successful – in order to be successful, a scout tank has to be very small, but capable at the same time of dealing with enemy armor. By the way, in early 50′s, Bundeswehr was shortly considering to arm itself with newly produced modernized Panther tank with upgraded armament and electronics – American tanks however “won the contract” in the end.

The SP I.C was the result of the abovementioned concept – in order to mount a turret with a short-recoil 90mm MECAR gun, changes had to be made to the chassis and the suspension. The gun, although sufficiently powerful, was however considered insufficient as a whole, because for all its capabilities, it was no longer possible to upgrade it even further. An autoloading mechanism was also tested in the turret (but rejected). The armor was extremely thin (15mm), but the vehicle was quite light (6,5 tons) and its engine (195hp Hotchkiss-Brandt) gave it quite a good power-to-weight ratio.

The vehicle was developed from 1956 to 1962 (the prototype was built in 1961). After 1962, it was discontinued for the abovementioned reasons (mainly the fact it couldn’t be upgraded further, but also due to some technical problems with the prototype. The prototype is currently located in Koblenz.

The 90mm MECAR is a curious weapon. Currently, there are various data about it from various sources. Ammunition mentioned in connection with it:

The ammo info comes partially from this thread. Honestly, the ammo is a mess and I don’t even pretend to understand which ammo could really be used by this particular type of tank, but surely, something can be balanced out of all that. 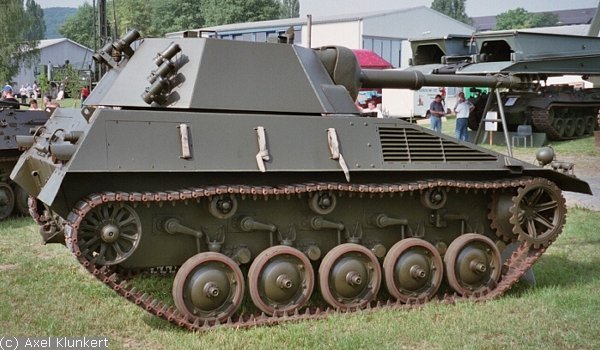