Wargaming usually presents us with articles, that are kinda nice. For example the history of the British flamethrower tanks (was it by Listy? I think so) – or Challenger’s historical posts. Every now and then however, they have what Rita would probably call a “brain fart” and just copy stuff from Russian portal.

Needless to say, that is not a good idea. For all their vaunted “remember history” campaigns, what Wargaming generally means is “remember Russian history”. SerB wrote it himself: if you want to do business in Russia, you have to be patriotic. No “we are all equal” – it’s more like “Russia stronk”. This of course comes with a “price” of having the historical post somewhat biased. I actually hate the word “biased”, but I guess it describes the situation best. This is not the first time Wargaming EU did this (some of you odlschool players might remember the Kliment Voroshilov weekend), but it’s not very common, thanks god.

With that being said, the recent Karelia article was one of those outrageous articles, that were written from Soviet perspective. It reminded me of a thing I’ve read recently somewhere on the internet:

“Those imperialist dogs have only one toilet per room, but here in Soviet Russia, we have TWO toilets per room! Soviet Russia is victorious once again!”

Nah, I don’t have anything against Russians obviously, but this stuff makes me pissed. Let’s have a look at the article itself:

However, more conflict was to come. When Germany invaded the Soviet Union in June 1941, the opportunist Finns took their chance to strike back as well. This would be known as the Continuation War. In just three months, the Finns had pushed all the way back through Karelia, halting at the original border. They held this point for the next two and a half years.

OPPORTUNIST Finns? Really? So you steal a part of the country that isn’t yours and when the owners try to take it back, you call them “opportunists”? Shame on those opportunist Czech and Polish resistance members then for attempting to fight the nazi (and Soviet) occupants.

On 26th November 1939 a border incident resulted in artillery shots seemingly being fired at Soviet troops. The result was the suspension of all non-aggression pacts between the USSR and Finland two days later. To date, it is suspected that this incident was staged by the Soviets, although full proof has never emerged.

At this point, I checked the discussion and of course, this picture just had to appear :) 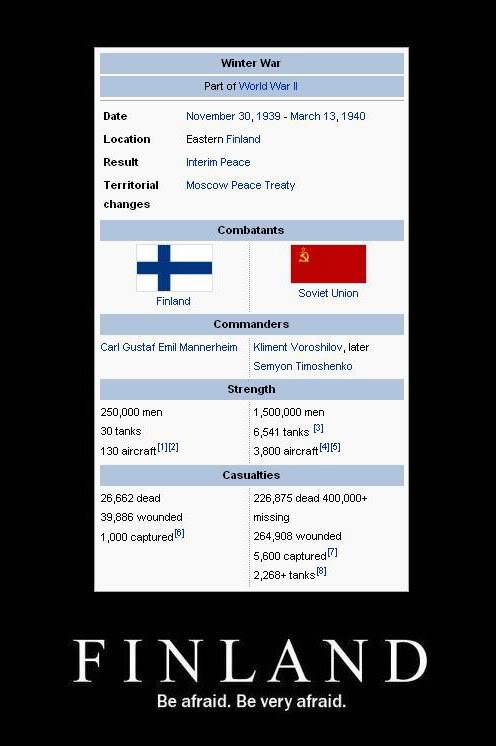 The truth is, the war was a complete disaster for the Soviets. Unprepared for the harsh weather, unable to cope with the Finnish guerilla tactics and poorly trained, they were completely decimated by the Finnish resistance and managed to advance only with horrendous casualities (something Soviet Russia was never afraid of). Note that even the Russians admit that no war was ever declared, making the invasion essentially a war crime, but somehow, noone seems to be bothered by that fact.

The article also mentions the Finnish allying with the Germans (conveniently omitting the fact that by that time, the Germans were the allies of the Soviets as well). Now, the discussion under the article is much more interesting than the article itself and since I am no expert on Finnish history, I am going to copypaste one post from a player named AngelofAwe, explaining some of the mistakes in the article (fixed the obvious typos).

- the Soviet Union didn’t just demand Karelia, but also the islands south of Finland and a naval base on Hanko, next to the Finnish capital Helsinki! Who in their right mind would accept that? Especially after the Soviets did the same thing to the Baltic states and then proceeded to completely occupy them – which was also the ultimate goal in Finland. The soviets even established a Soviet friendly new “finnish government” in Karelia to place in Helsinki once they had conquered the nation (SS: this is true, these were later viewed as traitors). Marskin_ryyppy adds the following:

“You didn’t mention that Finland would also have to destroy all existing fortifications on the Karelian Isthmus, even those which would be left in the Finnish side. I think especially this demand states what Stalin really had in his mind. The annexation of Finland.”

- the shelling of Mainila is not just “suspected” to have been staged by the Soviets, it’s been proven and even the Soviets themselves finally admitted they started the Winter War a couple of decades ago.

- “For a whole month, the Finns managed to stall the Soviets, slowing down their advance, but by the end of December they had fallen back to the Mannerheim Line and held them there for several weeks. This caused humiliation for the Soviet army and Stalin”

It talks about the war as if the Finns put up some resistance, but the glorious Red Army eventually beat them anyway and focuses on the Mannerheim line. Meanwhile, it ignores the action north of Ladoga, where the actual huge battles and defeats of the Red Army took place, such as the Raate Road, where just 400 Finnish troops halted the advance of 2 mechanized Soviet divisions long enough for (still outnumbered) Finnish troops to catch up, cut the soviet columns into pockets and annihilate them completely one after another. The soviet commanders in charge retreated and fled only to immediately be executed for the disastrous failure once they reached Soviet lines.

- “One by one, the Finnish defensive fortifications began to fall, although not without a cost to the invaders – Soviet casualties were high.”

Technically not true at all. The Finnish lines only broke after the Soviets focused everything they had on the Mannerheim line and bombarded it day and night along the 100km front with massive amounts of artillery. On the day of the breakthrough, the Mannerheim line was hit by 300,000 artillery shells within 24 hours – several times more than the finnish artillery fired in the entire war.

- “On 11 February, the Soviets had about 460,000 men, over 3,350 artillery pieces, about 3,000 tanks and about 1,300 aircraft deployed on the Karelian Isthmus. The Red Army was constantly receiving new recruits after the breakthrough. Opposing them the Finns had eight divisions, totalling about 150,000 men.”

Remember also that these 150,000 Finns had fought for 3 months with little rest and no reserves to switch with, meaning they were exhausted, not to mention that the Finns were out of ammunition and the artillery had been ordered not to fire unless in case of absolute emergency. Soviet losses were indeed high, 5 times more than the Finns in men, 10 times in aircraft and 100 times in tanks. The Finns barely even had any anti tank weapons, but invented one… the Molotov cocktail, that was often used in combination with running up to the tank and jamming logs into the tracks after which they threw the molotov into the ventilation and set the engine on fire. 1 ski-trooper was also decorated for taking out a russian tank by himself… with a crowbar.

- the Continuation war was inevitable, the Soviets immediately started planning a new attack on Finland as soon as the peace was concluded. The Finns were stuck with nobody to turn to after the nordic nations and allied democracies said no. Germany saw the situation and approached Finland offering modern weapons and equipment, Finland’s only hope. When Germany initiated operation Barbarossa, Finland did not immediately join in. Not until the soviets bombed Finnish cities did the government declare war and struck back.

- the Continuation war was also mentioned in a single paragraph while it held the most important battles in the history of Finland and perhaps all the nordic nations. After things went south for Germany, Stalin and his command decided to crush Finland first before racing to Berlin. They focused the might of the Red Army on this single task and indeed crushed the Finnish line with overwhelming numbers.

“On 9 June 1944, the Soviet Union opened a major offensive against Finnish positions on the Karelian Isthmus and in the area of Lake Ladoga (it was timed to accompany D-Day). On the 21.7 km (13.5 mi)-wide breakthrough segment the Red Army had concentrated 3,000 guns and mortars. In some places, the concentration of artillery pieces exceeded 200 guns for every kilometer of the front (one every 5 m (5.5 yd)).”

The first line fell quickly, the second one as well. Finland’s second largest city Viipuri was lost nearly without resistance. The Finns were pushed back to the final defense line, a line that existed only on the maps with no real fortifications. If this line was broken, the road to Helsinki would be open and the nation of Finland would be completely destroyed. At this final line, the Soviets would try time and time again, one of their first defeats came at Tienhaara, “the lock of finland”, where the Finn-Swede regiment IR61 (meaning my own grandparents) fought. Their positions were attacked by 2 Soviet divisions but the regiment, supported by strong Finnish artillery held on despite suffering 70% casualties. After that followed more huge battles, each one critical for the survival of the entire nation, Tali-ihantala to mention one, the largest battle in the history of the nordic nations.

Finnish intelligence intercepted the Soviet radio transmissions and knew when the attack was coming. 3 minutes before the Soviet attack all finnish artillery, bombers, mortars and the german Stuka detachment opened fire at the Soviet deployment area. After days of combat the 50,000 defending Finnish troops were victorious against the 150,000 soviet troops supported by 600 tanks. After suffering defeat after defeat, the Soviets decided Finland would not break so easily and wasn’t worth the time, effort and casualties suffered and started to withdraw equipment to focus on the German line. Not long after that, peace was concluded between Finland and the Soviet union.

- “Although Finland claimed to be neutral during World War II, its conflict being only with the Soviet Union, its success against the USSR relied upon German victory.”

After the Continuation War, Soviet Union demanded Finland to expel all German troops from its territory within 14 days, but the Germans didn’t agree on that and thus the Lapland War started. So Finland fought against Germany too.

- “Finnish soldiers tended to use German helmets that had been issued to them as part of the German support to the war effort.”

About half of the helmets Finland used in the Continuation War were given as an aid from Germany, but most of those weren’t German made. Germany sent about 175 000 helmets to Finland, which 75 000 were Hungarian, 50 000 Czech and the rest German. Finland also bought 80 000 German WW1 model helmets in 20′s.

Well, that’s it. Let’s hope to see no more “Russia stronk” articles for a while again.