not so long ago (prior to the introduction of patch 8.11), Storm mentioned one of his comments that there are two candidates for tier 8 American light tank: the T49 (upgunned Walker Bulldog) and the T92 Light Tank.

The T92 was being mentioned as a possible tier 8 American candidate on forums ever since the tier 8 light tank concept came to be – or, at least, ever since there was a talk of introducing high-tier scouts for other nations than the French. This of course happened (with various degrees of success), but the Americans are still waiting for their high-tier light tanks and it looks like they might get them this year. But is the T92 REALLY good enough for it to be a tier 8 candidate? Well, let’s have a look!

T92 Light Tanks is one of the proposals for a new, airmobile light tank for the US army from the 50′s, intended as a replacement for the Walker Bulldog. Here’s a short summary of its development by Priory_of_Sion:

The T92 is a very unique design which emphasized smallness. Weighing a little over 18 tons and armed with the same 76 mm gun the T92 was very close to being put into production which was planned in 1962. The 375 hp engine of the T92 would allow it to be very mobile. The 76 mm gun was located in a cleft turret which allowed for -10 degrees of comfy depression. The T92 was equipped with a semiautomatic loader. This would fire 1 round at a time and did not have any sort of drum. Each round would be put into the semiautomatic loader one at a time. After the round is fire the shell is automatically ejected. Protection is effectively the same as the M41 but lighter weight materials such as aluminum were used to protect parts of the T92.

The first T92 arrived at Aberdeen in 1956, the second arrived the next year. Both proved capable machines but there were problems found, in all 50 changes were to take place and ranged from problems with the tracks to problems with the shell case ejector. In 1957, before the 2nd pilot T92 arrived at Aberdeen, Congress found out about Soviet PT-76 and its amphibious capabilities. The T92 was unable be modified to become amphibious due to the design of the vehicle. In 1958 the T92 was cancelled.

As you can see, the vehicle is lower and sleeker than the Walker Bulldog (which is probably to appear on tier 7). Historically, it’s correct to put it after the M41, but was it really that much of an upgrade? Let’s find out by having a look at the holy tank trinity of armor, mobility and firepower. It’s worth noting that for its size, it had a crew of 4 men. 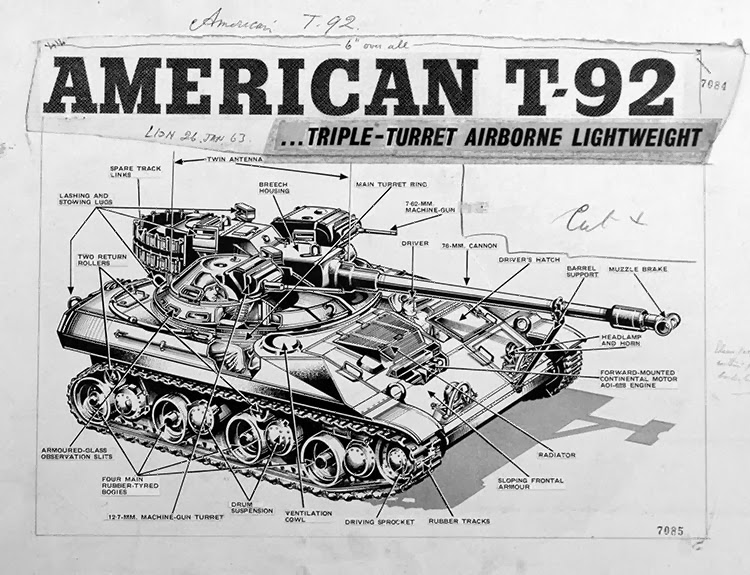 The best source of the T92 info is probably Hunnicutt’s Sheridan book. The text states the vehicle had similiar level of protection as the M41. Some components were aluminium (like the doors), but please note that the T92′s hull was made from rolled and cast homogenous steel and welded together. Aluminium components by the way are an argument against this tank, as there is currently no clear rule as how to implement aluminium into the game as far as I know. While not as durable as steel, it’s lighter. There were some tests, comparing the toughness of aluminium and steel, but it’s possible Wargaming would simply disregard the fact it’s aluminium and use “RHA” for everything.

The armor thicknesses are as follows:

As you can see, the vehicle is completely unprotected and will be overmatched by absolutely anything it meets. Armor is clearly not its strong side and it will be overmatched by absolutely everything. Definitely not a tier 8 material here, but the armor can somewhat be disregarded, IF the mobility and the gun are good. The armor however is clearly inferior to pretty much any hightier light tank in the game.

Maximum speed of T92 LT was 56 km/h (35 mph), again, not that much, considering the vehicle is virtually unprotected. Both other tier 8 vehicles are noticeably faster (64 km/h).

Agility of course is a balance parameter, it could be compensated by ground resistance buff, but overall, T92 was slower and had a weaker engine than its competitors, so again, this doesn’t look too good.

T92 Light Tank was equipped with a 76mm T185E1 gun. Sounds familiar? It should be, it’s the identical gun the T71 and T69 use in game. In the game, it has following parameters:

By the way, this gun was also identical to the gun M41 Walker Bulldog uses. I am not an expert on American ammunition, but according to FaustianQ (US forums), the gun had following performance:

Anyway, back to T92: its historical rate of fire was 12 RPM and carried 60 rounds for the 76mm gun. It could be elevated to -10/+20 degrees. Here’s a twist thought: it did NOT have an autoloader. Nope, the loading process was semi-automatic. Here’s how The_Chieftains (US server history expert) describes it:

The operator releases a round. of the type appropriate for the tactical situation from the shell dispenser rack The bottom of the round is pulled rearward and up the incline of the loader ramp, until the round is in position to be lowered onto the carriage of the gun loader assembly. When the round is properly seated on the loader carriage, it is automatically locked in place at the front by two ammunition locks and at the rear by two latches. The loader operator now pulls the loader’s headguard assembly all the way to the rear. Next, the loader operator will check his safety switch box to see that the turret power switch is at the “On” position and that the turret power indicator light glows, showing the presence of power to the turret control circuits. At the safety switch box he then depresses the pushbutton type loader cycle switch, holding it in until the entire loading operation is complete and the loader comes to rest once again on the turret floor. This completes the preparation of the gun for firing, as the breech closes automatically during the loading cyle.

So, what we basically have here is a gun, that is without an autoloader underpowered even for tier 7 for a proposed tier 8 vehicle? I think that when you compare it to the 90mm AMX-13 gun and the 100mm WZ-132 gun, the outcome is absolutely clear. 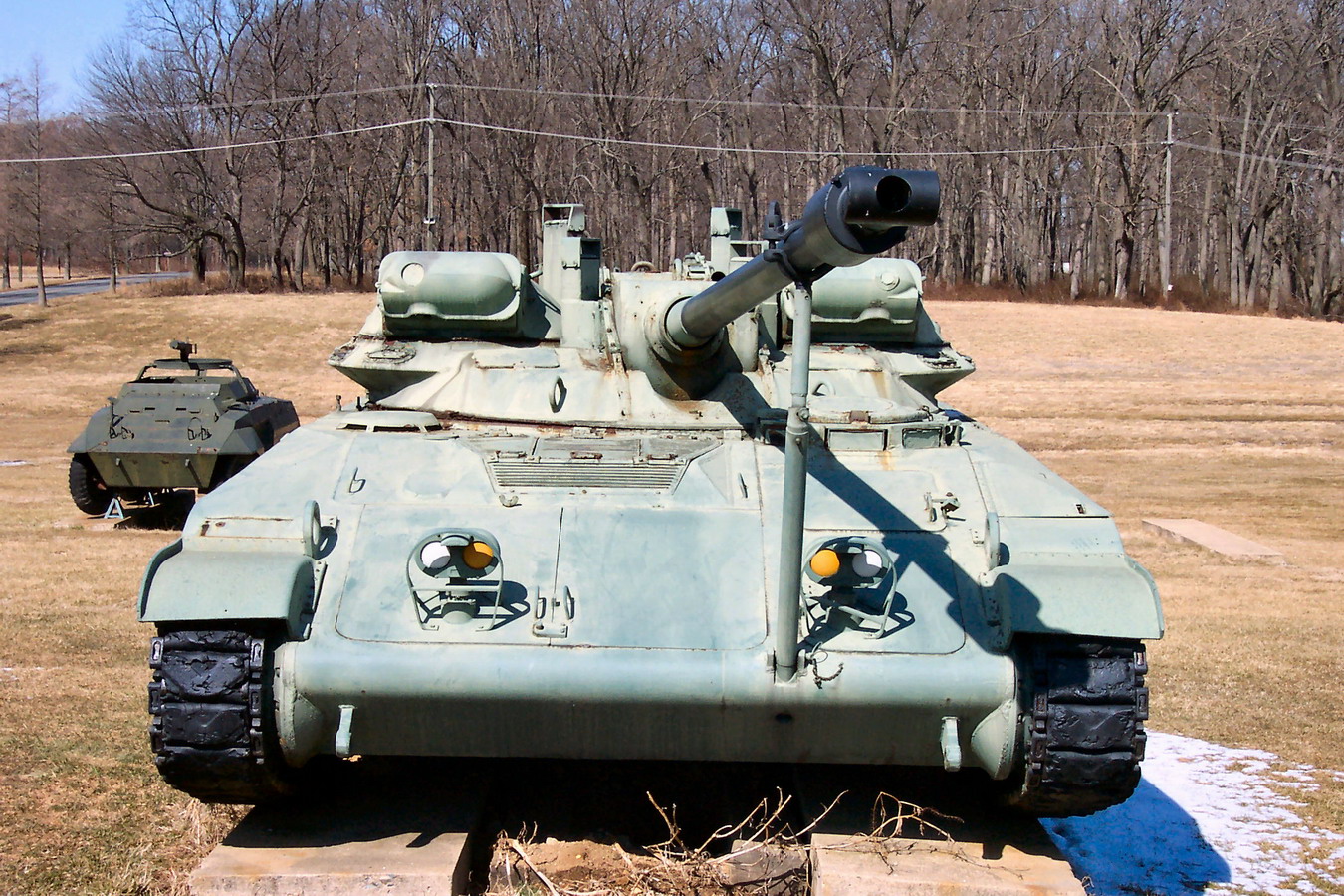 Considering no other gun or engine was proposed for the T92 (and, thus, any upgrades would have to be unhistorical), without some serious fake overhaul (like installing a gun that wouldn’t fit in real life, installing an autoloader that wouldn’t fit etc.), there is no way in hell this vehicle can be a tier 8 light tank. It’s too thinly armored, too slow and too undergunned for that. Even historically it would fit the tier 7 slot too, since technically it started as a part of what became the T71 program.

I have a feeling that Storm, when he noted it as a tier 8 candidate, either didn’t pay particular attention to this vehicle or was simply mistaken. T49 is a much better tier 8 candidate and with tier 7 slot going to the Walker Bulldog (at least I hope it is, technically it also could be M24 – T41 – T92 – T49, although that would make little sense, with T49 being and upgrade to the M41), I actually don’t think we’ll get to see the T92 in the game, because it doesn’t fit anywhere. Maybe there might be two tier 7 light tanks? Who knows?

Ironically, the T92 was actually good for what it was supposed to do. It wasn’t a disaster, what buried it was the demand for it to be amphibious – that’s how the disaster called Sheridan started.