to finish the series of obscure Czechoslovak projects, here are two interesting vehicle proposals you might have heard about – but you probably haven’t. 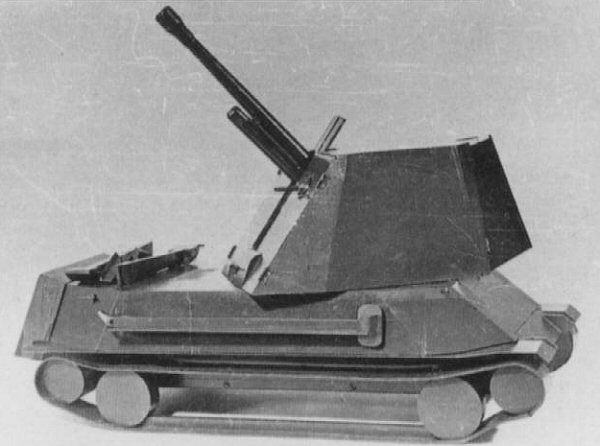 This is a proposal (as the name suggests) to mount the 105mm light field gun LeFH43 on the T-25 chassis. LeFH 43 was newly developed Škoda project by the way, not the old 105mm LeFH 18 howitzer. It was created by Škoda as a part of the light artillery competition probably in late 1943 – in this case, its competitors were Krupp (with its Heuschrecke IVb) and Alkett (with its 10,5cm le.F.H. 18/40/2 (Sf) auf GW III/IV). Drawings were made and a wooden mock-up was built, but the project never progressed beyond the mock-up stage. The vehicle was designed to weight 24,2 tons and had between 16mm and 30mm of armor on various places. The howitzer was removable from the mount (much like the German proposals had it). The 105mm howitzer could fire a 14,8kg HE shell at 610 m/s velocity.

Special Panzer Variants by Spielberger state the parameters of this vehicle as such:

This is a “sister” project – a proposal to mount the 150mm howitzer on the same chassis. Technical drawings are confirmed to exist, but a mock-up was probably never made.