after very positive first impressions from last night, I decided to take a closer look at historical battles and share my impressions from them. First, overall, despite parts of it not being translated yet, the interface is very simple and streamlined. It’s very easy to orientate within it, you just take the vehicle, select historical ammo loadout below and go. The only problem I see in this is that it’s not that easy to find out, how exactly does the historical configuration of the vehicle look.

- minimize the historical battle window
- run your mouse over the “historical loadout” icon (more like label) next to the service
- historical setup will appear, but only in names, not a “schematic” of stock/nonstock – for example, it will tell you that the engine you will be using is HL120TRM, but it won’t tell you that it’s the stock engine or top engine, you either have to know that or check the “research” window of the vehicle
- in historical battle mode, research window still shows the original random battle configuration, so if you for example want to take the Panzer IV Ausf.H in historical battles, you will be using the L/48 gun, but if you run with derp in randoms, you will see in research window that derp is still installed, this is a bit counterintuitive

Other than this, it’s fine, so let’s see our first historical battle. It’s also worth noting that since everyone “wants the Tiger”, Tiger (and generally other “big cats”) waiting times are VERY long, for testing purposes, it’s better to roll around with StuG or Panzer IV. 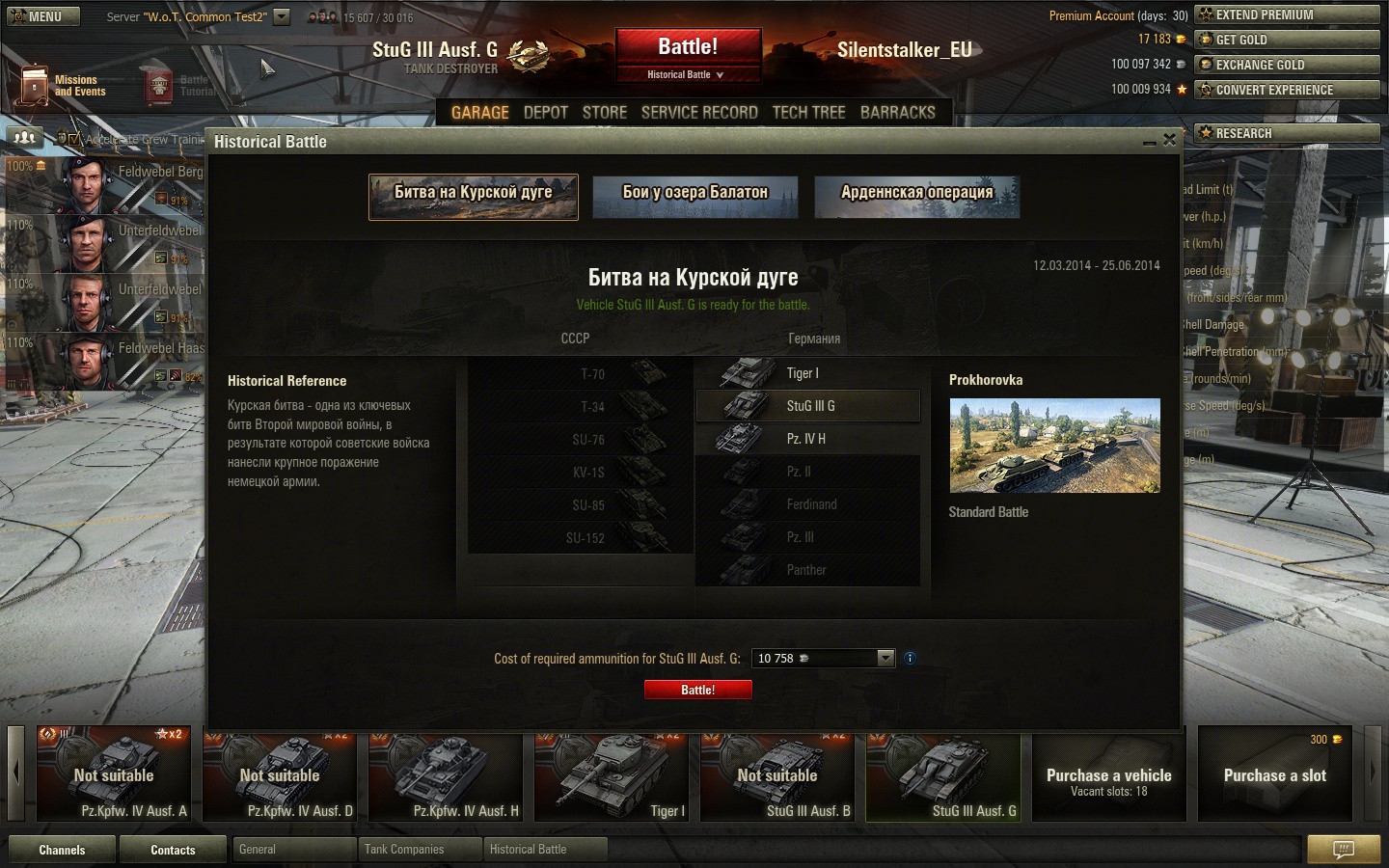 The description is not translated yet, so I will do that for you, it says: “The Kursk battle is one of the key battles of WW2, the result of which was the German army suffering major defeat at the hands of the Soviet armies.”

The map is obviously Prokhorovka :)

First lesson (I learned the hard way) of historical battles is that tiers don’t matter that much. Stock tier 6 is actually WORSE than elite tier 5. This goes especially for KV-1S and Panzer IV – that’s a very good example. You see, KV-1S in this battle is historical, that means stock turret and 76mm gun. It is actually worse than elite Panzer IV Ausf.H the Germans use and despite being one tier higher and a heavy, it is defeated easily, unless the Panzer driver is a moron. Last night, there were plenty of KV-1S in the queue, their players probably looking forward to massacre Germans with the 122mm guns – sorry :P

The Kursk battle seems balanced at 8vs8 or so, I haven’t seen bigger teams than that. Not sure that is intentional, or just some test MM glitch, but it actually works really well, the battle is shorter than random and it has nice flow to it (a bit like team battles, only, you know, without the ZOMGESPORTZFFS).

What is also worth noting that even the weakest vehicles of the battle are not useless and don’t feel underpowered. Of course, there are things such as the Panzer II, that can scout and that’s pretty much it, but the Panzer IV fits perfectly and so does the StuG. Both use their historical guns (L/48 and L/43 respectively) and it works very, very well. Same goes for their Soviet counterparts – technically. Historical T-34 is able to defeat the Panzer IV (as I learned the hard way).

What is probably not so okay is the vehicle balance. You see, Germans win in 90 percent of cases. I am actually not sure why that is, because technically, Soviets have some really nasty machines as well (especially the SU-152), I suspect this has something to do with the fact that both sides in this case go for the “big guns” – the result is that the Soviets have the entire team filled with SU-152′s, plus one or two T-34′s or so and since they are very fragile and blind as a bat, the Tigers tear them apart. By the way, the Tiger feels pretty overpowered. Of course it’s still not the HURRDURRRUSH vehicle Germanophiles wished for, but it can take some punishment and for this battle, its short 88 is very sufficient. On the other hand, Ferdinand is insanely overpowered and should be removed from this battle I think (or at least reduced somehow), because it’s just ridiculous – if left unchecked and without the Soviets focusing on taking it down immediately (lol, cooperation in random – good luck), even one can decide the battle easily.

In this battle, the Germans are clearly much stronger and even if the Soviets have the most firepower they actually can have (SU-152), they are inferior due to the fact SU-152 has no armor and its camo factor isn’t exactly stellar either. This needs to be addressed I believe. The Russians need at least two or three more tanks (tier 5-6). Results such as this aren’t much fun. 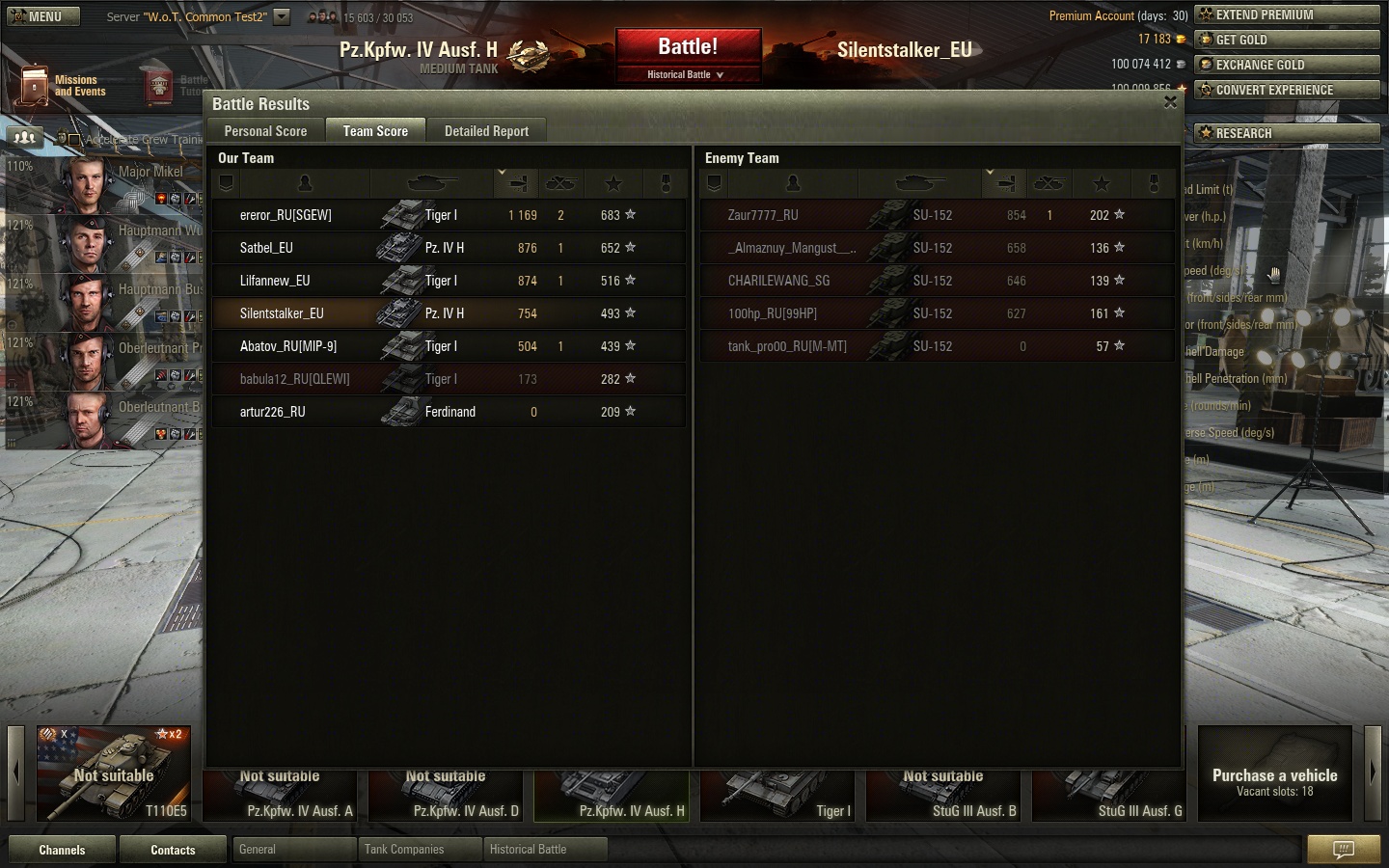 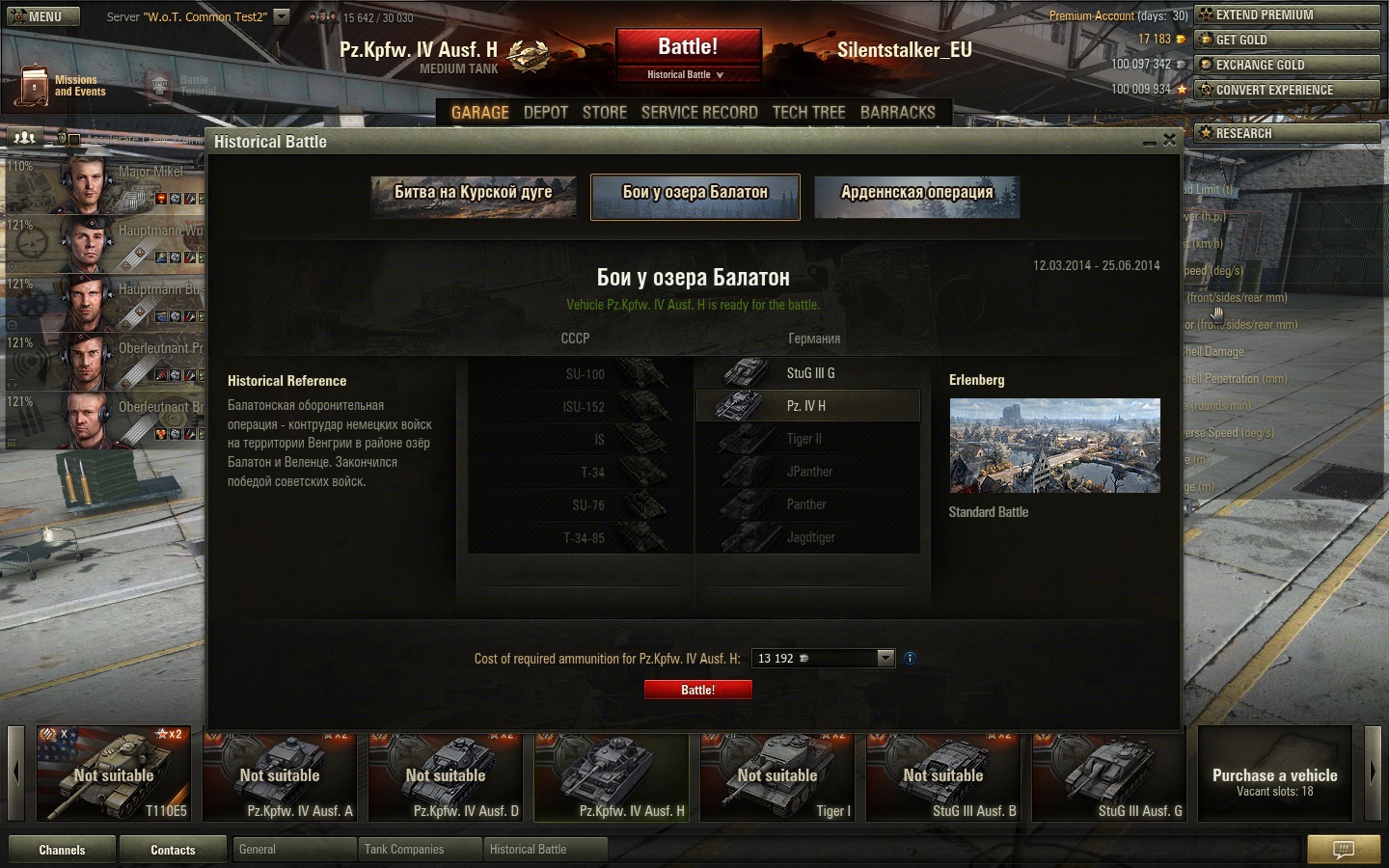 The battle description says: “Balaton defense operation – counterattack of the German armies in Hungary, in the Balaton and Velence lakes region. It was ended by victory of Soviet armies.”

For some reason, this battle is played on the map Erlenberg, I can’t say it fits historically, but I guess there was no better choice (Murovanka?). This battle has exactly the opposite problem than Kursk. Here, Soviets are ridiculously overpowered. Why? Check this setup out: 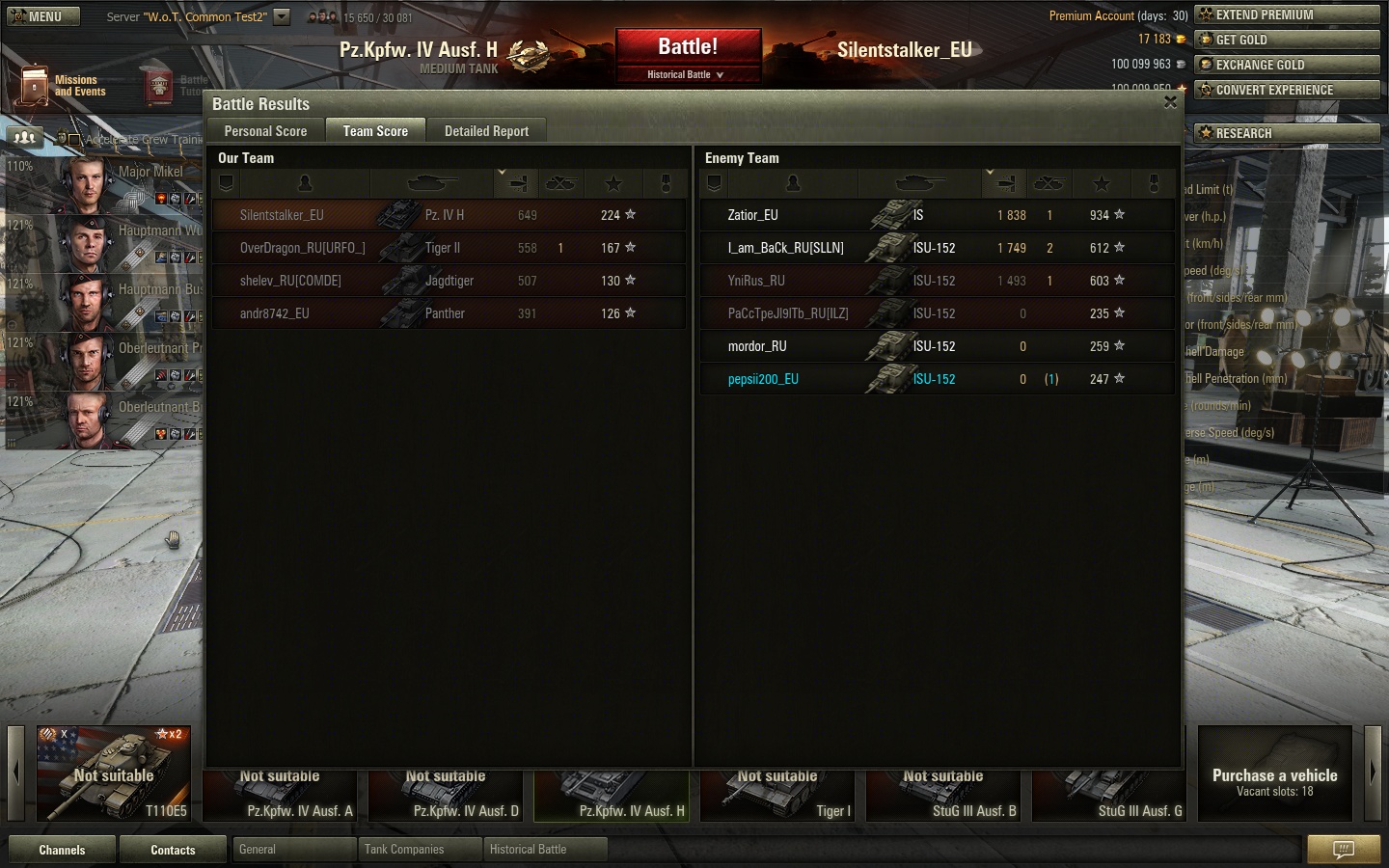 You can imagine how well that battle actually went. The problem in this case is the fact that Jagdtiger is “too expensive”, when it comes to its MM weight. On paper, 128mm Jagdtiger should be able to deal with pretty much anything, but in reality, everyone else gets killed and Jagdtiger gets mobbed and killed easily. ISU-152′s (even in stock) have insane firepower and being this outnumbered just cannot be won. Of course, the problem is, there will ALWAYS be a Jagdtiger in the battle on one side, because of the crowd of “IWANNAPWN” noobs. In this case, the Panzer IV is equipped with the L/43 gun and running that against ISU-152 armor (you can’t penetrate it from front without gold ammo, of which you have exactly 3 rounds) is absolutely pointless. StuG obviously suffers from the same issues and Tiger II really can’t decide that battle against such odds. This battle is very poorly balanced overall.

Even without the ISU-152 spam, the setup generally looks like this: 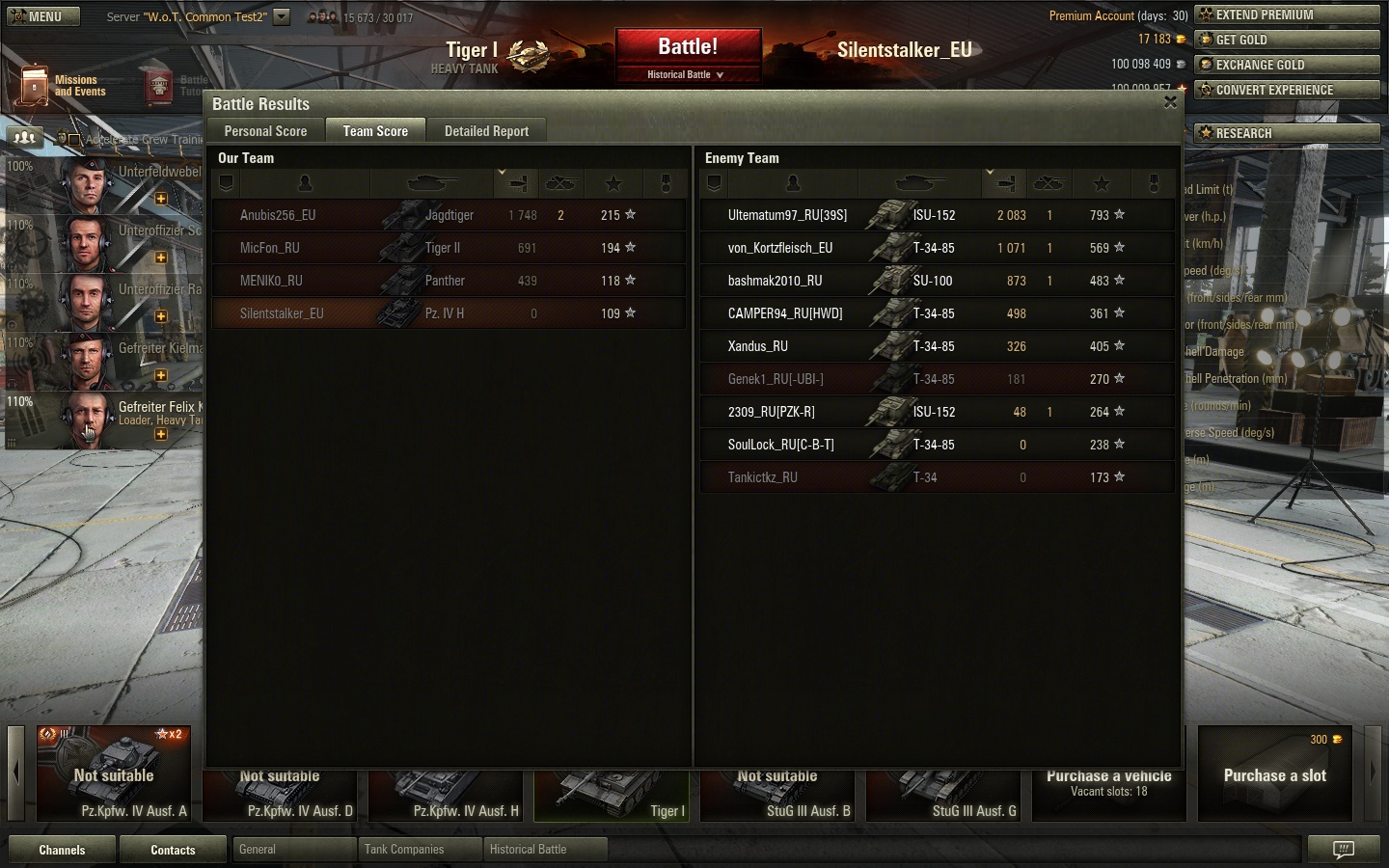 This battle literally stands and falls on the performance of the Jagdtiger driver. If he is an idiot, like in this case, he focuses on sniping T-34′s on the other side of the map, while leaving flanks open. The small amount of German tanks protecting its flanks get overrun by a horde of T-34′s and Jagdtiger gets killed. My guess would be that Jagdtiger’s job is to destroy the most dangerous enemy targets, such as the ISU or IS. Without that, the Germans lose every time. 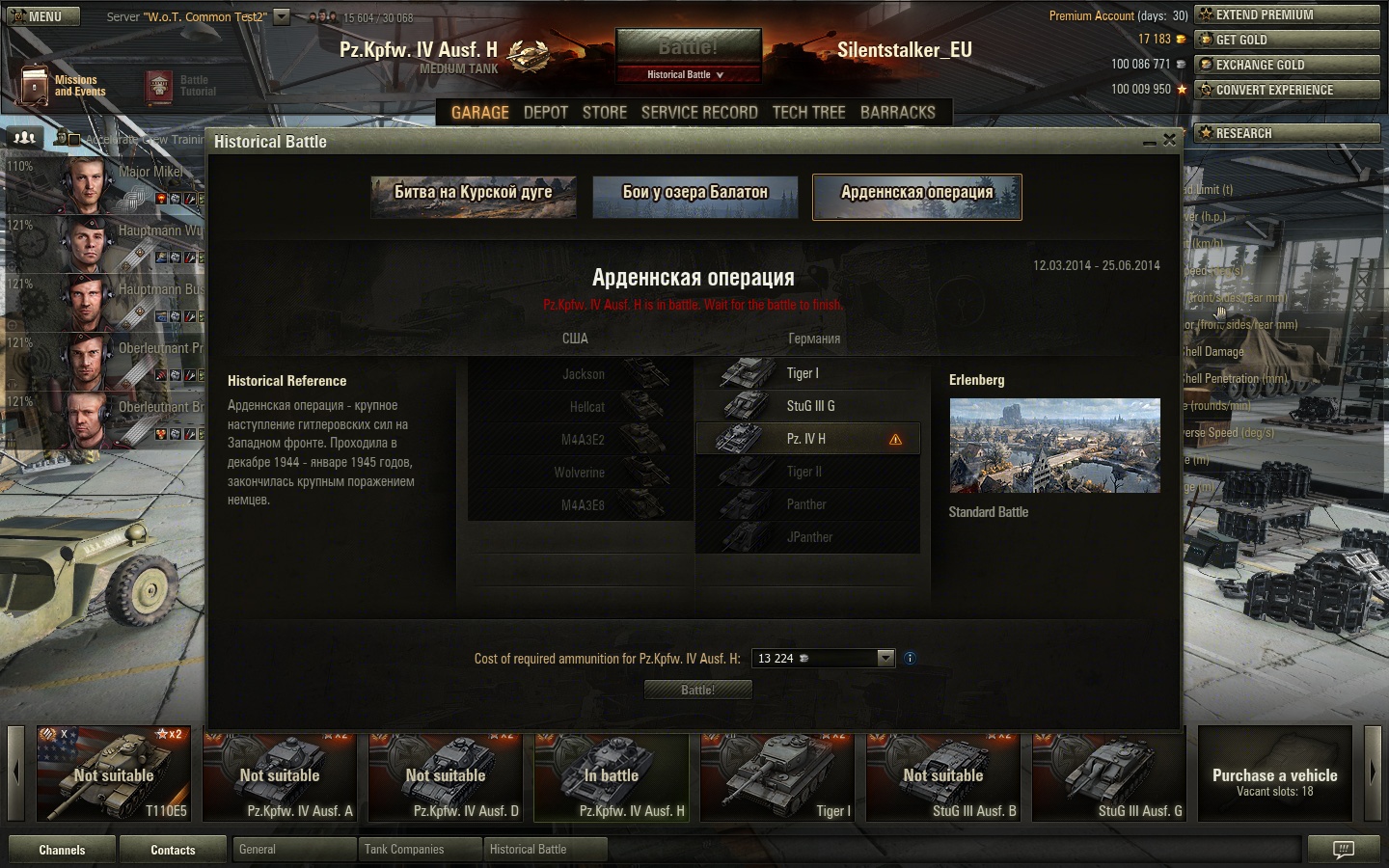 The description says “Ardennes Operation – major offensive of hitlerite forces on the western front. Happened from December 1944 to January 1945, ended with major defeat of the Germans.” Notice the term “hitlerite”… ugh.

Either way, from the vehicle setup (American tier 6′s – in Hellcat case stock – versus German tier 7′s and 8′s), you can probably imagine, how well that goes for the Americans. 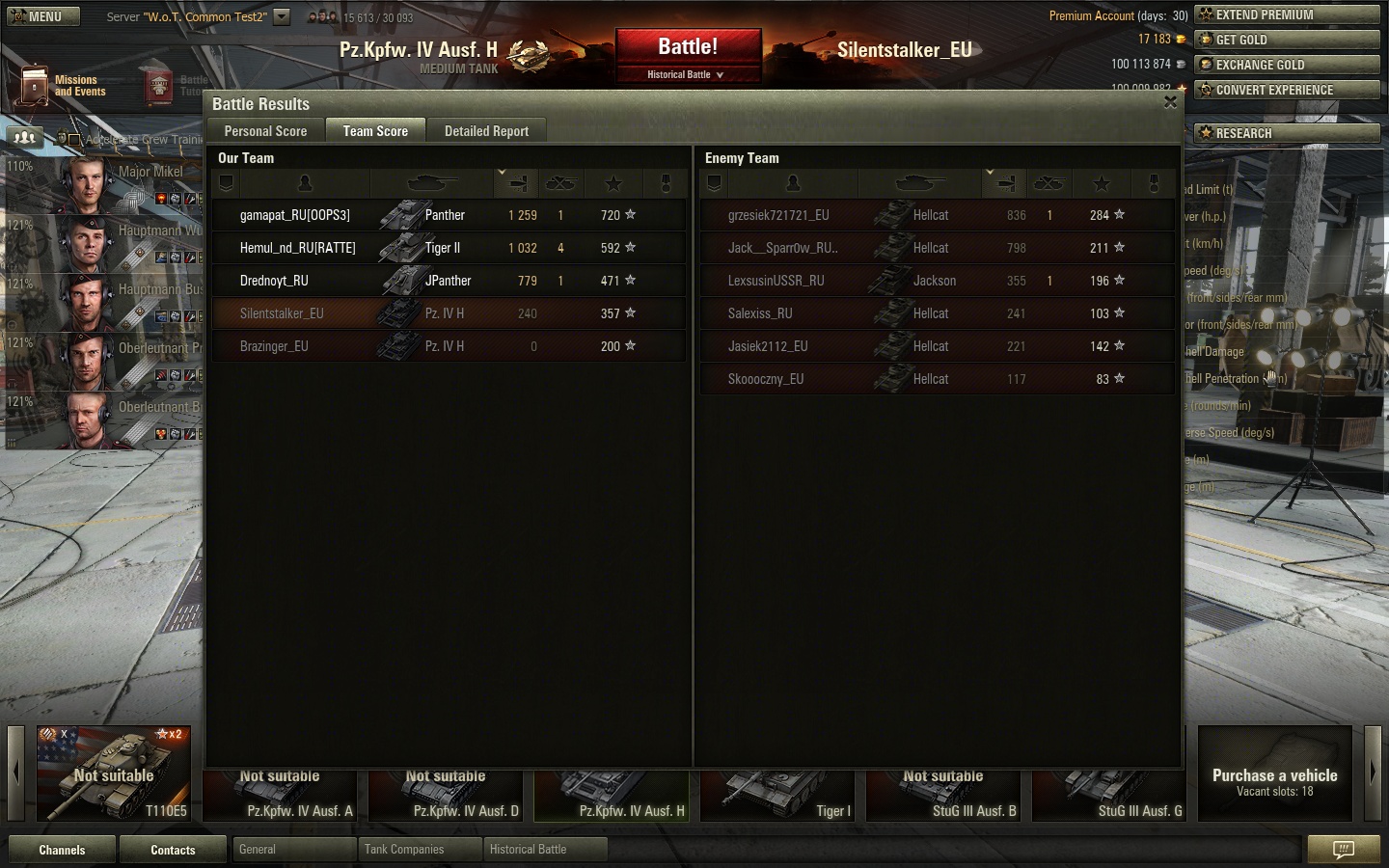 Above is the typical battle result. Americans mob the smaller tanks, but can’t deal with the German heavy armor at distance, have to close in and without the advantage of cover and camouflage, Jagdpanther plus Tiger II rip them apart. In this case, Americans need SERIOUSLY more vehicles. More Jacksons would work as well probably, but I have seen very few of them.

Overall, all three battles need more balance. Last night, I wrote that it’s fun – and it is, because I was playing German in the Kursk battle and that’s something you simply can’t lose. Personally, I understand why Wargaming did what they did – abandoning the “slot” system and going for simple modified matchmaking, but it’s worth noting that it creates ridiculously unhistorical setups, such as a flood of Hellcats. I am not saying that at some point such battle did not happen (I actually don’t know whether it did), but it certainly is not a proper representative of that period’s general historical order of battle.

But it’s just a test. There is still time to tweak it.