what follows is the account of my test 9.0 impressions. It’s just the first round, so I am sure more changes will come.

Okay, holy shit, the hangar looks AMAZING. Even on medium details. This has to be hands down the best hangar Wargaming ever created. Including that poppy field one. Graphic settings transferred smoothly as well from live server, although – for some reason – the monitor frequency was set to lower setting than what I have on my desktop (took my a while to figure out, what’s “feeling off” with my screen). 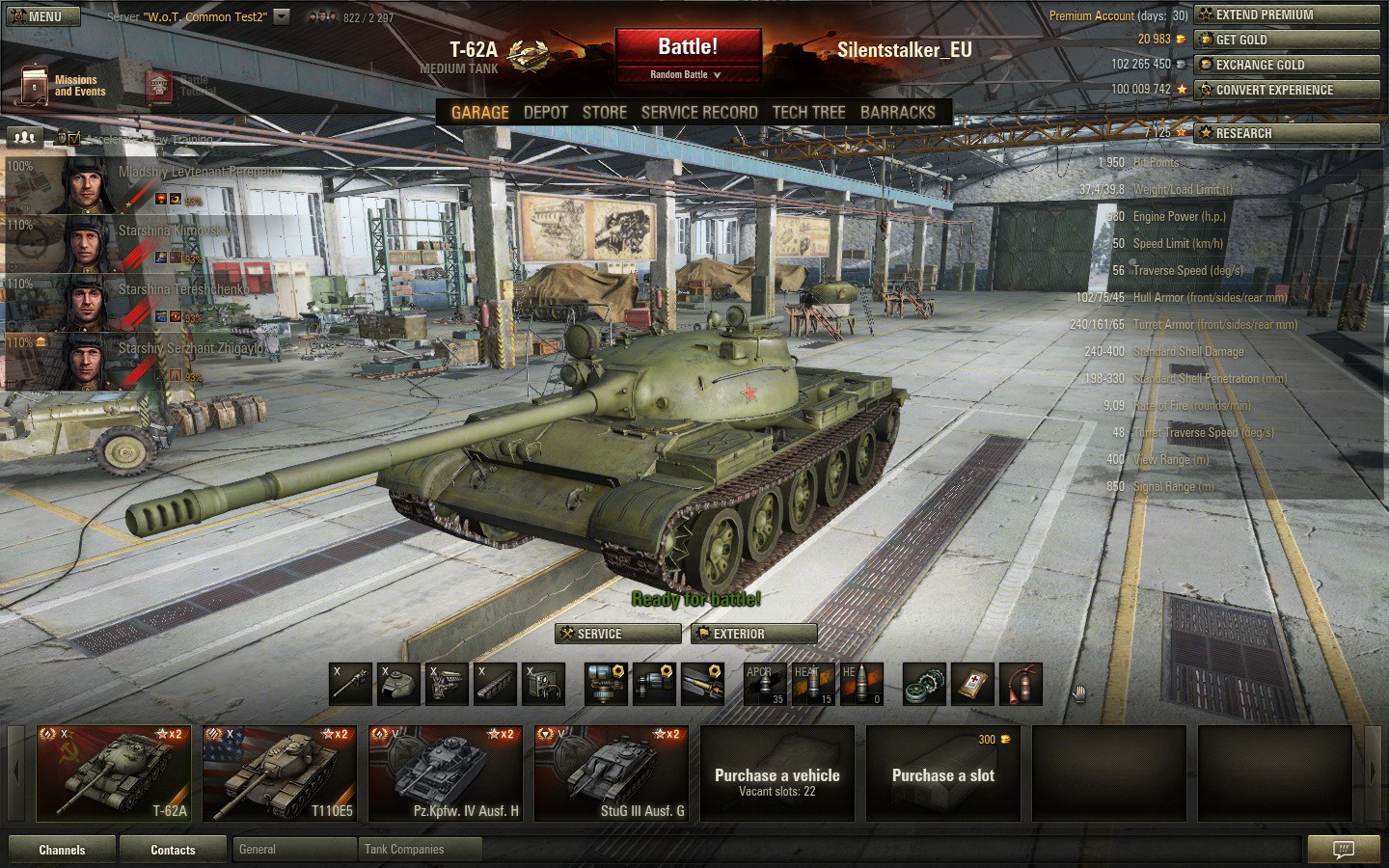 So, let’s look around. As you can see, the interface, while staying roughly the same, got streamlined a bit. Yep, that’s a good thing. Especially the message window got reworked – check this out, this is how it looks now (lower right corner): 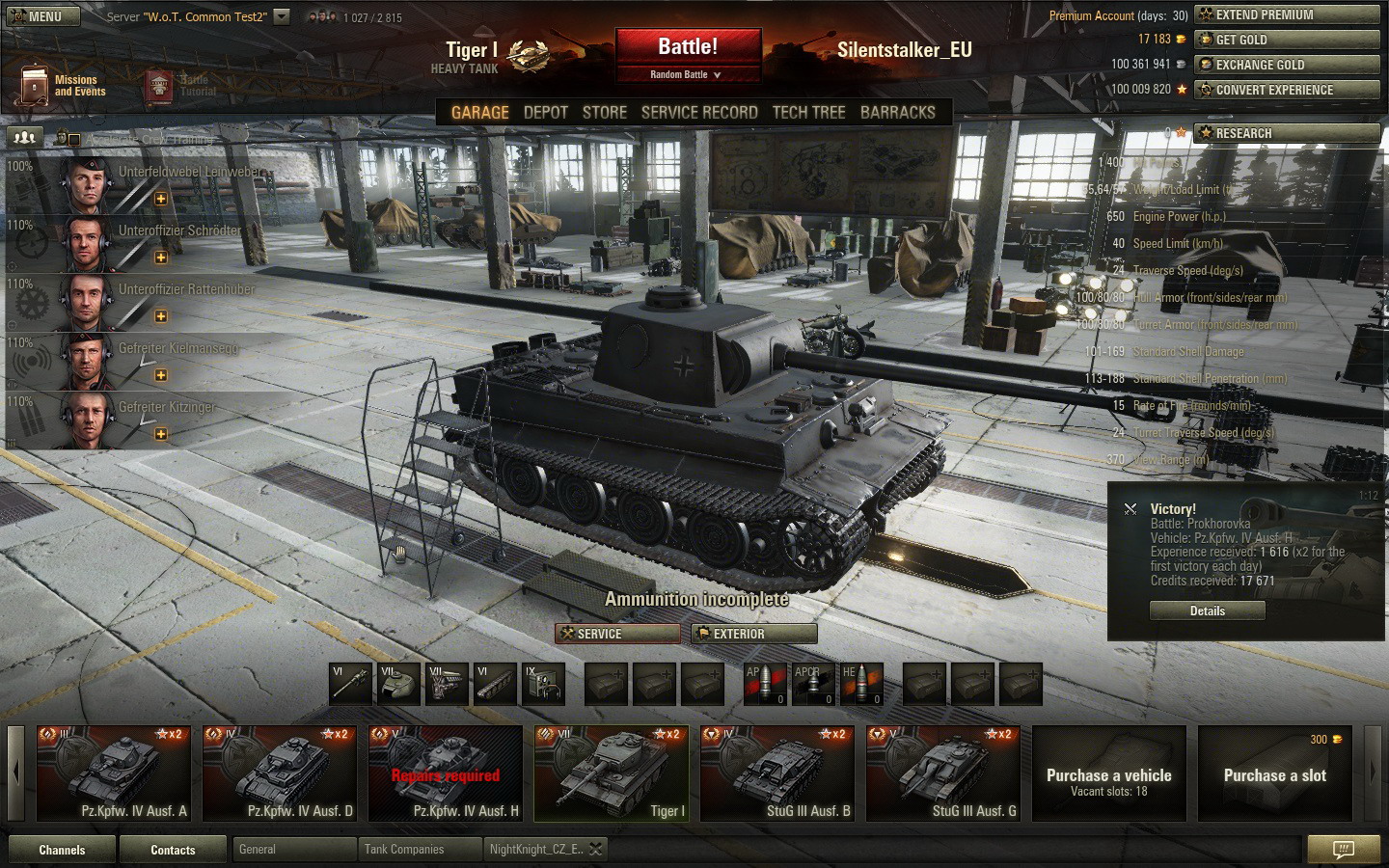 It looks bigger and better, kinda like in World of Warplanes, if I remember correctly? Could be wrong though. Anyway, so far, I like. Of course, since this patch brings HD tanks and all that, I just HAVE to turn the high texture resolution on (usually, I play on medium). What I noticed in the hangar by the way is that now, tanks (and mouse) have inertia: if you “spin” a tank, it keeps on spinning. Will take a while getting used to. Anyway, texture quality set, zero FPS loss in hangar? Interesting. So far so good.

The historical battles window is not translated yet, but it’s pretty self explanatory: 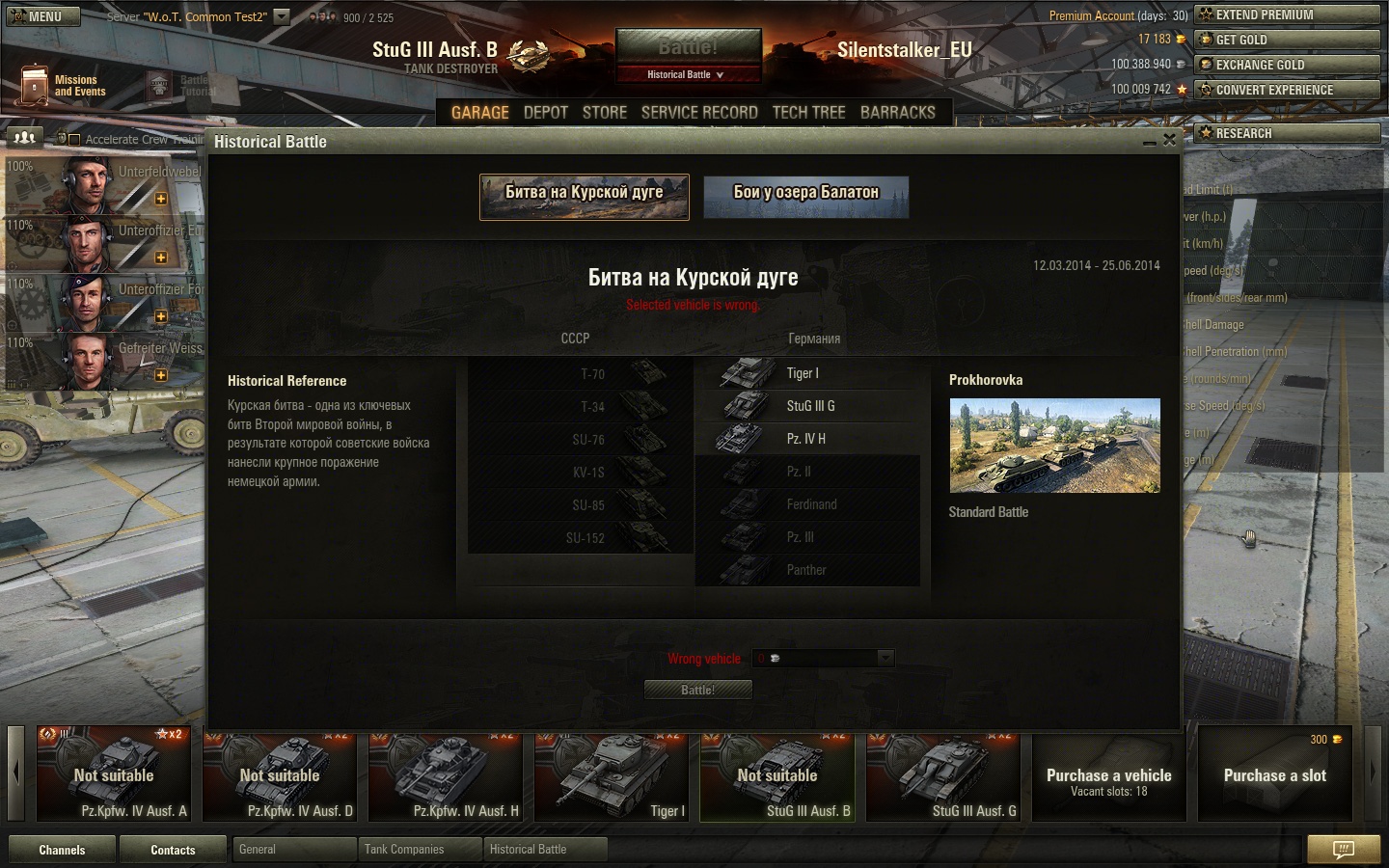 On the upper side, you select, which battle you want to participate in (in this case, either Balaton or Kursk operation). Under it is the list of vehicles, that can participate in the battle – you have to have them in your garage of course. Interesting fact is that you have to have the proper modules researched. When you select historical battles (under the “Battle” button, much like selecting for example company mode), the vehicles “reset” to their historical setup (for Tiger for example, that’s pretty much the elite, minus the top gun, it gets the short 88 instead, tier 5 Panzer IV is in elite status though) automatically, pretty neat. All you have to do is pay for the ammo setup.

And off we go. 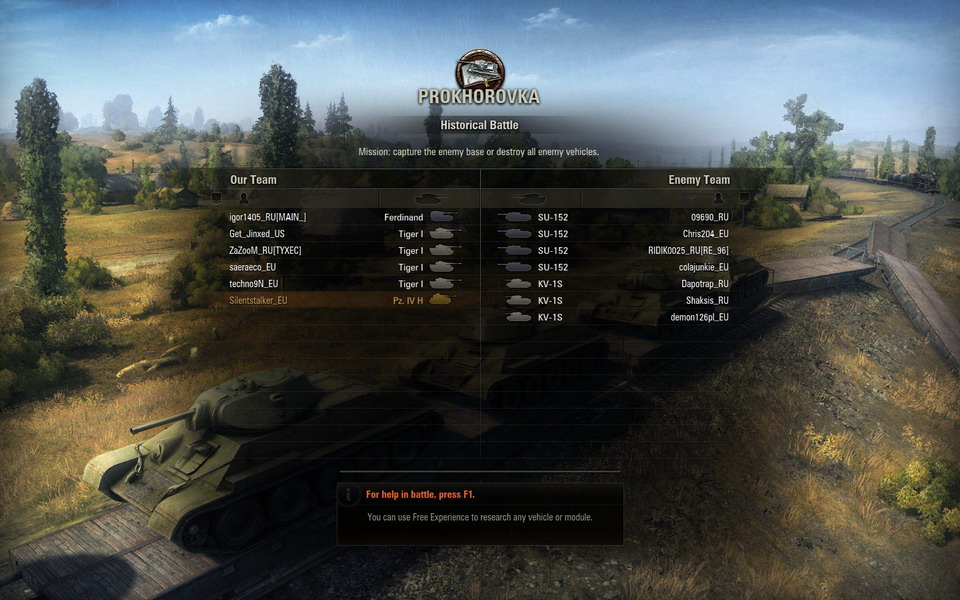 As you can see, both teams don’t HAVE to have the same amount of vehicles. That’s cool. My Panzer IV is ready (obviously, everyone else had the Tiger for testing, but I tried to wait with the Tiger and after 4 minutes, I kinda gave up – Panzer IV came up almost instantly). The battle is played exactly as the random.

This is the part where my mouth went wide open with surprise.

Let me tell you one thing about this patch. It’s freaking AMAZING. For one, my FPS went up actually. Mind you, my computer is hardly top notch, but I did see some nice improvement. Second, there are no lags. None whatsoever. Nada. Runs completely smoothly. Might be the fact it’s 1AM, but EU1 and EU2 lag like shit for me at any hour, test server doesn’t. Extremely refreshing. The vehicle moves smoothly, the new Panzer IV handles VERY well and the side armor causes some nice troll bounces against the historical KV-1S. Mind you, historical KV-1S comes with a 76mm gun – complete joke, my Panzer IV tore one to pieces (right before I got oneshotted by one of the TD’s). Everything runs smoothly, I love it.

There is one thing though. The sniper mode got “reworked”. For one, the black part of the screen is gone (which is cool, if unusual, gotta get used to it). What is a bit worse is that the sniper mode is now green tinted. 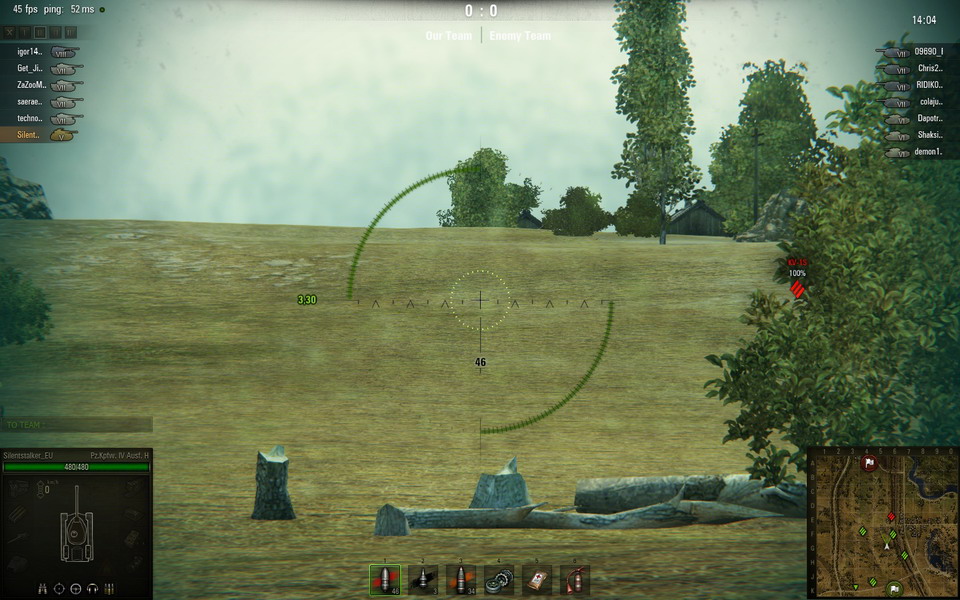 I am not exactly sure this is intentional (we’ll probably see tomorrow). Either way, tried a few historical battles, had insane fun. This is the best thing that happened to World of Tanks ever since… I don’t know. Forever. Amazingly funny mode. It doesn’t even need crowds of tanks to work, 7 vs 8 or so is just fine. It just… I don’t know. Works. Really well.

Another thing I extremely liked are the reworked explosion and fire effects. Can’t screenshot that, you gotta see it. It looks really wonderful. Oh yea, turret ripping off? It’s right there. Not sure what exactly they did with the shaders either, but the tanks look now more… metal. More real. It might not seem like it, but these shaders might be a HUGE leap forward for World of Tanks. And I mean a huge one. It just works.

But you know the best part?

Even crappy computers can run HD models. My computer, as I said, usually runs on medium textures. I turned the HD Tiger on and it runs perfectly smoothly. The independent suspension is there as well, the Tiger sort of “glides” over the surfaces. I haven’t tried the other HD models yet (will tomorrow – today even, damn it’s 2 AM), but the Tiger? Hot damn. Oh yea, by the way, you like your vehicles with camo, right? Check this out: 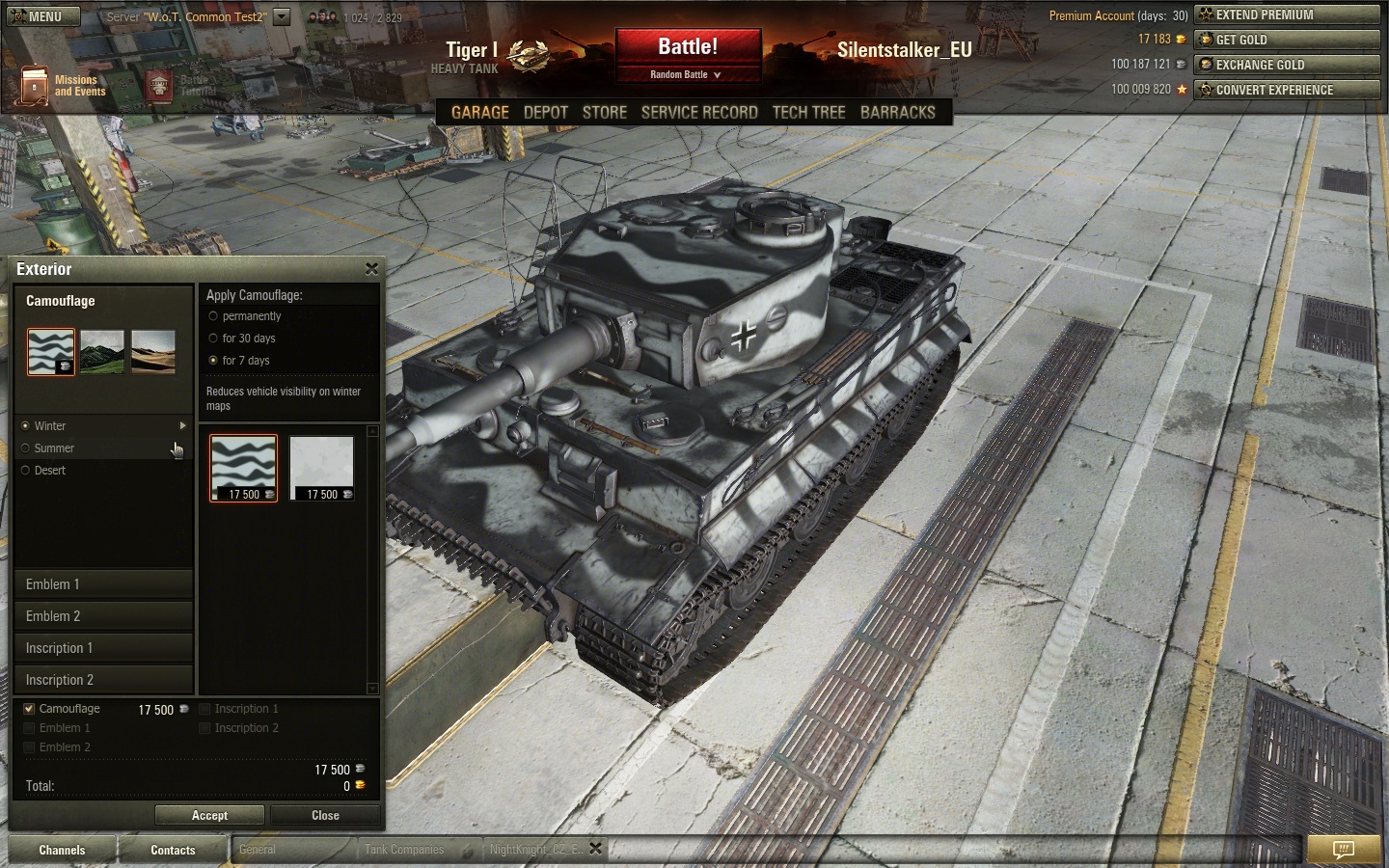 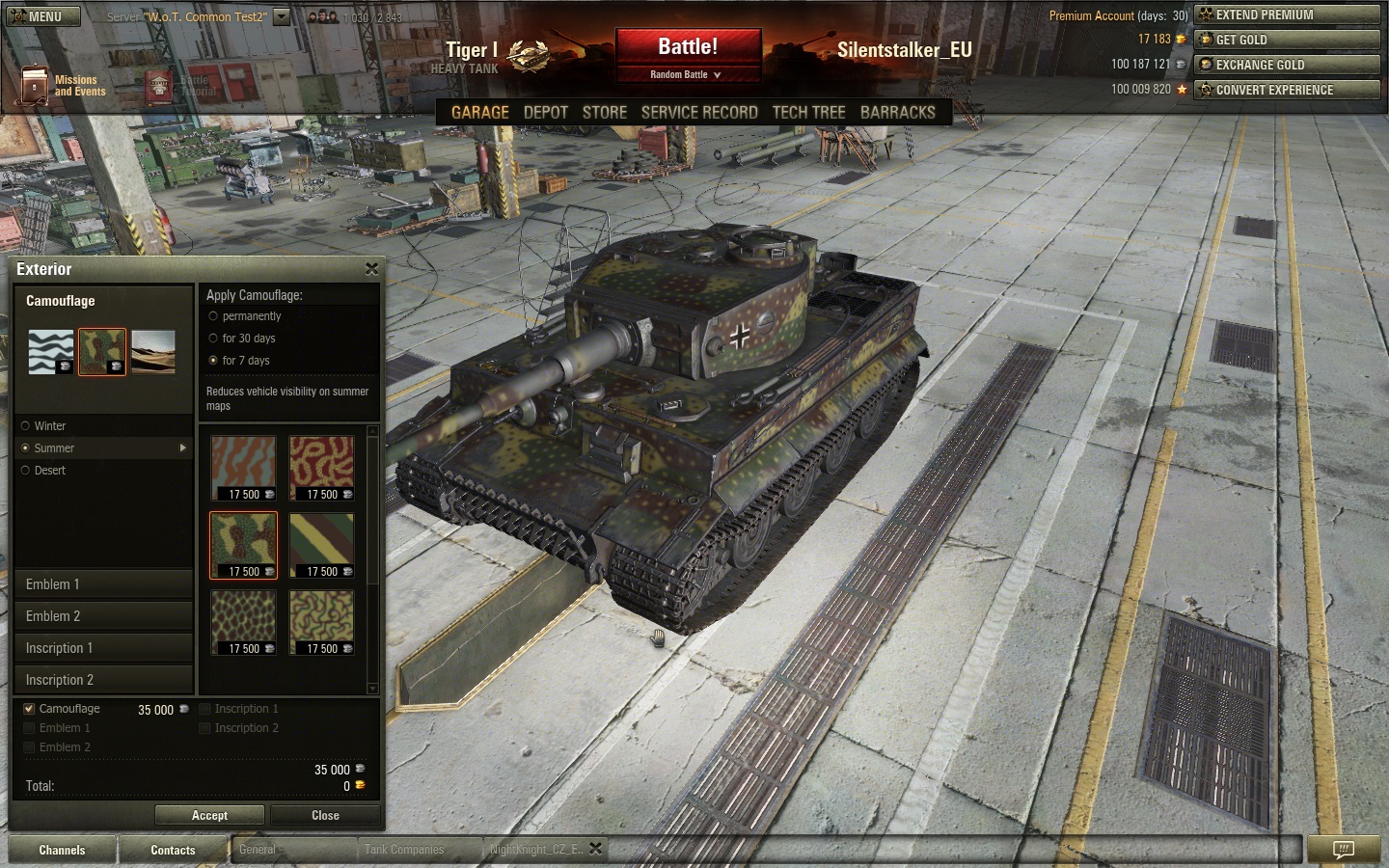 Looks great. My first impressions of this patch are overwhelmingly positive. You know me, I am not that easy to please, but this just looks great. I love it. So far, I am very impressed with 9.0 – I hope it will last. Oh okay, one small problem I have with 9.0: for some reason, the tier table was removed from the queue screen: 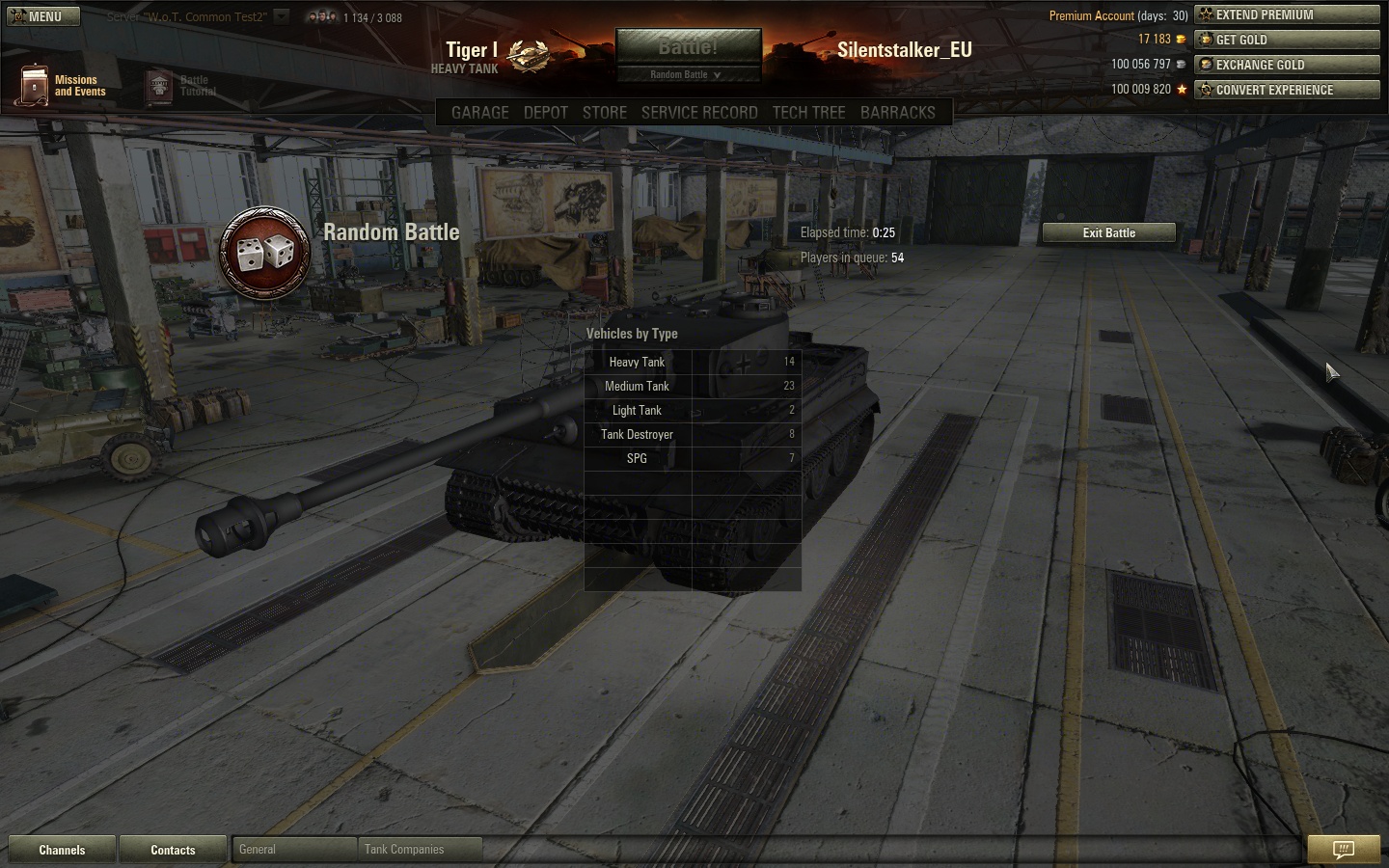 But that’s just a small thing. Now, if only they fixed those goddamn lags on EU….