sometimes, projects appear in the world of armor and warfare that just click. They make sense and they are instantly recognized for their hidden brilliance and their revolutionary nature – indeed, such projects change the world of armor forever. This is definitely not one of them. 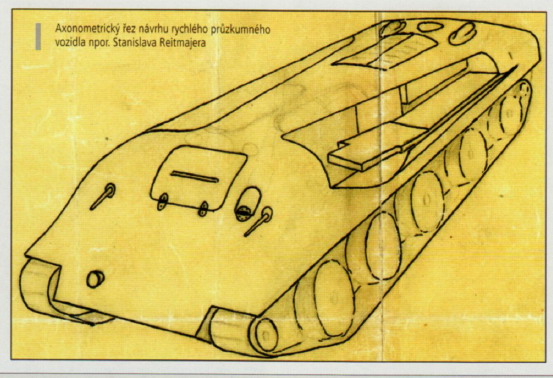 In the early and mid-50′s, the armored recoinnessance was not considered to be exactly high priority in the Czechoslovak army. The army realized by the end of the 40′s that the day of the recon light tank is over and several prospective (and very promising) projects (T-17, TNH 57/900) were scrapped as a result. Possibly the rast remnant of the light tank development was project “Leták”, a codename for an amphibious tank development (its result was actually evaluated as better than the PT-76), but politics and finances once again stood in the way and the project was cancelled.

Under such conditions, it was believed that the recon role can be handled either by halftracks or by armored cars. In early 50′s, both categories saw several projects, but nothing really came of it. The army was firmly focused on starting the production of local T-34/85 (and later T-54) tanks and this task was draining the resources of the entire Ministry of National Defense (MNO). It was in this situation that 1stLt Stanislav Reitmejer came with his proposal.

1stLt Stanislav Reitmajer was serving at that time with the 13th Tank Division in Mladá. He was probably aware of the tendency of the army “machine” to suppress individual proposals like that (he was not a professional tank designer, but he allegedly did have something to do with the new Czechoslovak halftrack proposal), so he did something that was quite frowned upon – he bypassed the proper procedure and sent his unconventional vehicle proposal straight to the Minister of Defense himself on 11.5.1955.

In his letter, he proposed a vehicle, that would be as low as possible in order to hide easily, to be easy to dig in and to provide the enemy with a very small target. The armament of the vehicle was proposed to be two 7,62mm machineguns, a man-operated RPG (!) and a flamethrower (!!!) with 110 liters of fuel. The radio was proposed to be the RM31A model. Its author proposes the vehicle to have some 20mm of armor with 5mm of rubber lining inside to make the vehicle gas-tight. It was to be powered by an unspecified air-cooled 120 horsepower engine, which would have to fit inside a 110x70x70cm compartment. The vehicle was to be able to reach 80 km/h with this engine (while weighing 10 tons). The transmission would be semi-automatic. The author proposed also a torsion bar suspension, five roadwheels etc. – he actually did ho into completely pointless details, such as detailed drawings and proposals for the track links, which, given the fact how outlandish and unrealistic some of the proposed elements were, was quite strange. 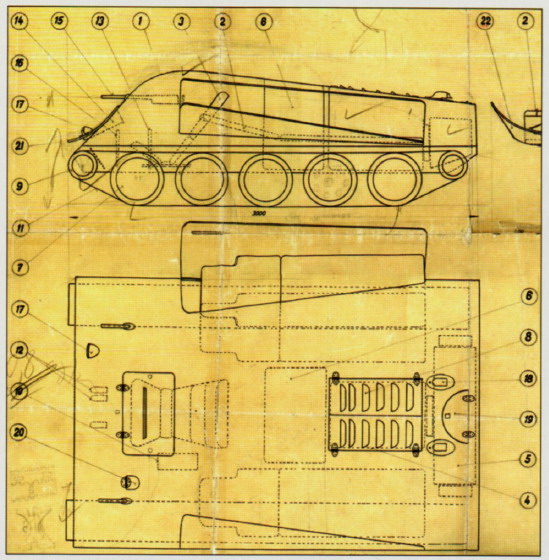 The crew positioning was perhaps the strangest element of the entire proposal. The driver and commander of the vehicle at the same time was sitting in the front, while his other two crew members were lying (!) on their bellies behind him, operating the two (probably DTM) machineguns. The flamethrower was located on the left side as well.

The best part however was the proposed hydraulic system, that would

a) open the “wings” on the side of the hull
b) push the “beds” (on which the crewmembers were lying) outside, allowing them to shoot the P27 “Pancéřovka” RPG (actually it’s technically a 112mm caliber HEAT warhead recoilless gun, penetrating cca 200mm of armor)

You can probably imagine how well that would go. To make things even more interesting, there were hatches proposed on the roof, that would allow the crew to “shoot out in all directions”. Furthermore, apart from firing a machinegun, a flamethrower and an RPG, the poor left crewman was also to operate the radio.

Nevertheless, the project got its attention thanks to the unorthodox way it was submitted and on 31.5.1955, a committee of the Mechanized Tank Armies HQ evaluated the proposal. Unsurprisingly, the result was not in favour of the vehicle. The committee basically stated amongst other things that:

- the vehicle is too low for the proposed 120hp engine
- 120hp would not allow it to go as fast, for 50-60 km/h, a 150-200hp engine was needed
- the concept of limited firing arc forwards is wrong
- lying gunners wouldn’t be actually capable of any recon duties, which is a problem for a recon vehicle

The committee actually didn’t kick 1stLt Reitmajer out, they recommended he reworked his proposal. He allegedly did that, but the next submitted “reworked” proposal was actually practically identical to the original one. 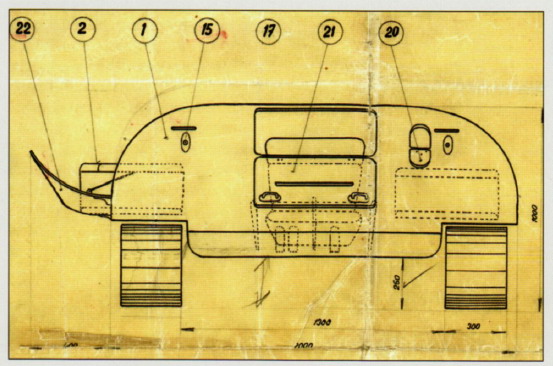 Apart from the committee, Reitmajer’s proposal was also considered by the development department of the ZJVS tank production plant in Martin (Slovakia), judging from the correspondence however, the tank developers clearly thought that 1stLt Reitmajer is an idiot. The evaluation was ready on 15.10.1955 and their comments on the projects included the following:

- the armor proposed was pointless, it would be better to have 30mm frontal armor and better slope
- driving characteristics and properties would be terrible (at 3m length, the vehicle could pass only a 160cm ditch and a 30cm tall wall)
- poor ground pressure
- better clearance needed
- in order to reach 80 km/h, 250-300hp engine was needed
- such a powerful engine would in turn not fit into the engine compartment (not even a 120hp engine would)
- the transmission development would take years
- drive sprocket is too small

and other details. A detailed drawing of the driver’s compartment was also made, proving the space is too small. The solution with the “hydraulic beds” was heavily criticized. The outlandish flamethrower and RPG proposal was also – to put it mildly – criticized, the tank developers had no idea, how the poorly armored vehicle would get at 50-150m distance from the enemy. Further comments included that putting a 110 liter flamethrower fuel tank right next to the crew compartment is probably not such a great idea either.

1stLt Reitmajer was also criticized for not knowing the tank terminology and the project was evaluated as completely pointless. In the end, on 24.11.1955, the evaluation reached 1stLt Reitmajer’s unit, stating that this proposal will not be developed further (let alone produced). Apparently, the letter was very civil and 1stLt. Reitmajer got thanked for his efforts.