Today, we have another guest article, this time by Daigensui, who worked previously on getting info for the Japanese branch. She named the article…

This is Part 1 of the Japanese Tank Destroyer Series, dealing with the origins of tank destroyer development and the first results. Before we look into the beginnings of the pretty meager collection of Japanese tank destroyers, we need to first understand how tank destroyers came about.

The first tank destroyers were basically stopgap solutions, mounting an anti-tank gun on a tracked vehicle and calling it a dedicated anti-tank weapon. The German Panzerjägers, anti-tank guns in an open-topped superstructure on a light tank chassis, were the major starting point for this idea. The existence of heavy French tanks like the Char B1, which were beyond the capabilities of the major anti-tank guns in service, meant that the Germans needed larger guns on mobile platforms. That is how Panzerjäger I and the Marder series came about: putting larger anti-tank guns on tank chassis to give them the mobility to keep up with the rest of the armored forces. It was only as the war went on that with more powerful tanks coming to the battlefield that we have the appearances of casemates on medium/heavy tank chassis armed with powerful guns.

Now, considering this background, one has to put onself into the mindset of the Imperial Japanese Army to understand why Japan was never too keen on developing tank destroyers. When your current enemy barely has any armor to speak off, and you have a non-aggression treaty with potential enemy to the north (which you fought before, and realized that your current towed anti-tank guns were adequate for the job), why would you go through the trouble of trying to stick larger guns on your already limited tank chassis? After all, your 37 mm Anti-Tank Gun Type 94 could just about deal with anything in your path, including those Western powers in Southeast Asia with their Universal Carriers, Lanchester Armoured Cars, Carden Loyd Tankette, and Stuarts. Your industrial capacity is already strained to the breaking point with a massive continental war. So, why bother with this tank destroyer nonsense? 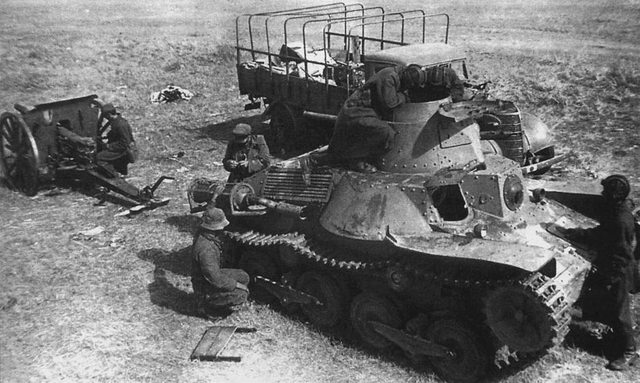 Obviously, when you realize that perhaps one or two of those enemies might be bringing something more protected.

Contrary to what many think today, Japan did learn quite a few lessons in the clashes with the Soviet Union. These were consolidated into Nomonhan Research Report, a classified candid document not meant for public consumption, but intended for the use of staff officers who would be charged with implementing the recommendations. Of course, most of the suggestions were ultimately not implemented as it should have been, due to the core lack of industrial capacity Japan was facing during its entire time as an empire. Regardlessly, the document did have great influence over Japanese armor development, and would be the background for the making of the Japanese tank destroyer force. 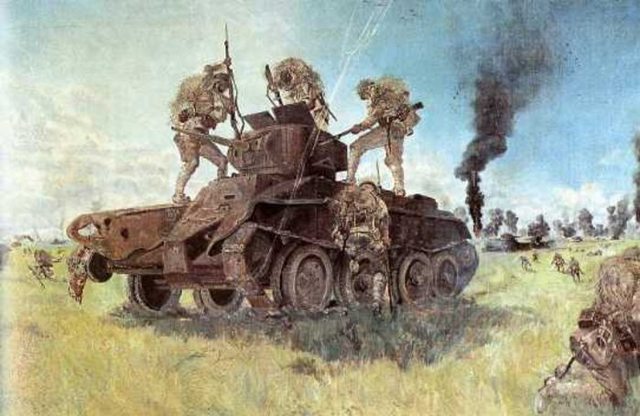 Perhaps the silent complaint noted in the report was the lack of sufficient anti-tank weapons, be it the towed guns or tanks. In fact, one part noted that the troops would be annihilated without such weapons in case of a future attack, and endorsed research to design a more powerful anti-tank gun that would be necessary to defeat heavier armor likely to appear in the future. This lead directly to the development of the 47 mm Anti-Tank Gun Type 1 and its adaptation for use in Type 97 Chi-Ha Kai.

The findings in the Nomonhan Research Report also endorsed the concept of making the anti-tank weapon the nucleus of the infantry formation, along with with suggestions for the need for a self-propelled gun as part of a comprehensive renovation of artillery. While ultimately the organic artillery of Japanese infantry divisions became so bewildering as to defy the notion of standardization, self-propelled guns did begin to appear in Japanese units. The first one, born from the fire of the Mongolian plain, was Type 1 Ho-Ni I. 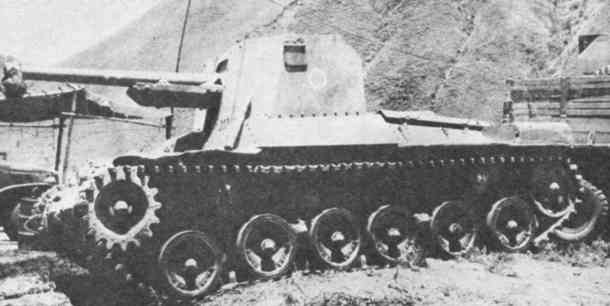 Type 1 Ho-Ni I was developed by using the existing Chi-Ha chassis and engine, and replacing the gun turret with an open casemate with frontal and side armor only, while applying extra armor to the front hull. Basically, it followed the Panzerjäger idea, sticking a larger gun onto an existing tank chassis. In line with the need for both a good anti-tank weapon and self-propelled gun, Ho-Ni I was designed to operate as self-propelled artillery in the armored divisions while being armed with a relatively high-velocity gun for anti-tank purposes.

One might ask why it took almost two year (development started in December 1939 and acceptance was in October 1941) for such a simple vehicle to come out. As it turns out, clashes about the purpose of this “gun-tank (housensha)” was the main reason for the delayed development. At least there was the simple lack of any suitable anti-tank gun until 47 mm Anti-Tank Gun Type 1 came along. Aside from this, there was the disagreement on whether this gun-tank should be purposed for anti-tank or artillery purposes. The anti-tank/artillery argument was only settled after the decision to make a separate self-propelled gun armed with a 10.5 cm howitzer (Ho-Ni II) for pure artillery purposes, with Ho-Ni I providing both long-range direct fire and anti-tank capabilities with a modified 75 mm Field Gun Type 90.

Ho-Ni I served mostly with the 2nd Armored Division in the Philippines, where while it did not have a big impact on the battlefield, was still able to do its job sufficiently for such an outdated design. It was one of the few vehicles that could defeat a Sherman, with the veterans of the Japanese-Soviet conflicts carrying out camouflage and ambushes, managing to destroy M4 tanks from around 500 meters away. In the end, all Ho-Ni Is were destroyed, with only one example surviving in the United States. 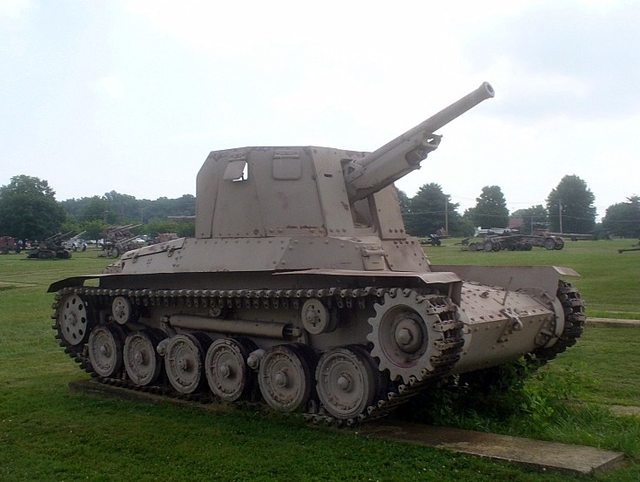 For the Imperial Japanese Army, however, Ho-Ni I was not enough. In order to solve the issues of crew survivability, a fully enclosed and armored casemate was made for the upgrade, Ho-Ni III, in 1943. In addition to this, with the case mate having its flanks protruding beyond the hull sides, it provided more room for the crew and the possibility of upgunning, although such upgunning never happened due to lack of resources. Also, the gun was changed to 7.5 cm Tank Gun Type 3 Model II, a modified version of 7.5 cm Field Gun Type 90 for use in gun carriers. The breech was shorted by 300 mm to allow greater traverse (22° to each side) and elevation (-15°/+25°). 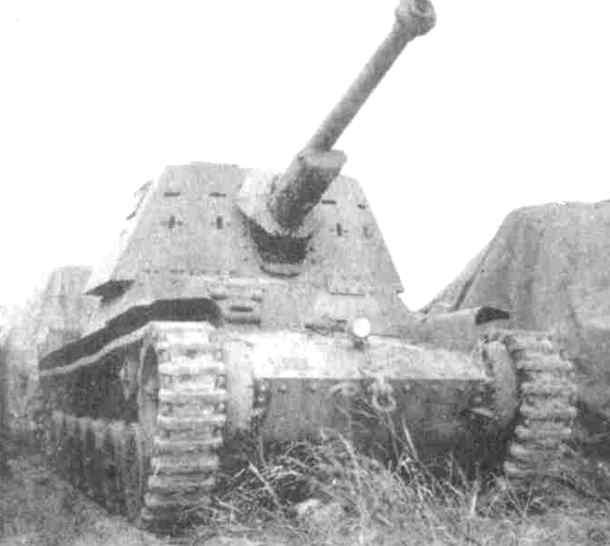 Unfortunately, unlike Ho-Ni I, Ho-Ni III was kept on the Home Islands for the “Decisive Battle” against the Allied invasion, thus never being used in actual combat.

This was just the beginning of Japanese tank destroyer development. While the beginnings were humble, the start of the Pacific War meant that Japan needed more powerful vehicles, and thus began rapid improvements…..