The T16 Carrier was a vehicle heavily inspired by the legendary British Bren Carrier. It was designed by the Ford Motor Company and produced in Dearborn, Michigan. T16 was in fact a refined version, based on the Canadian-produced version of the Bren Carrier, improved by using the British wartime experiences. Its production started in 1943 and it was supplied to the Commonwealth countries (and others) via the lend-lease program – 2625 T16′s were transferred in 1944, 604 in 1945. After the war ended, it was, along with other arms, sold as wartime surplus to other countries and one of them was Argentina, who originally hired a Belgian company called Indanex to purchase various armored and other vehicles for it for the uniform price of 20 US cents per kilogram. Over 500 vehicles were transported to Argentina, including a Crusader Mk.III tank (in fact, it was a Crusader-based tractor, that later became the platform for the Crusader Argentino self-propelled gun), many trucks, Jeeps, several M5 and M9 halftracks, 360 Sherman tanks and 300 T16E2 carriers. 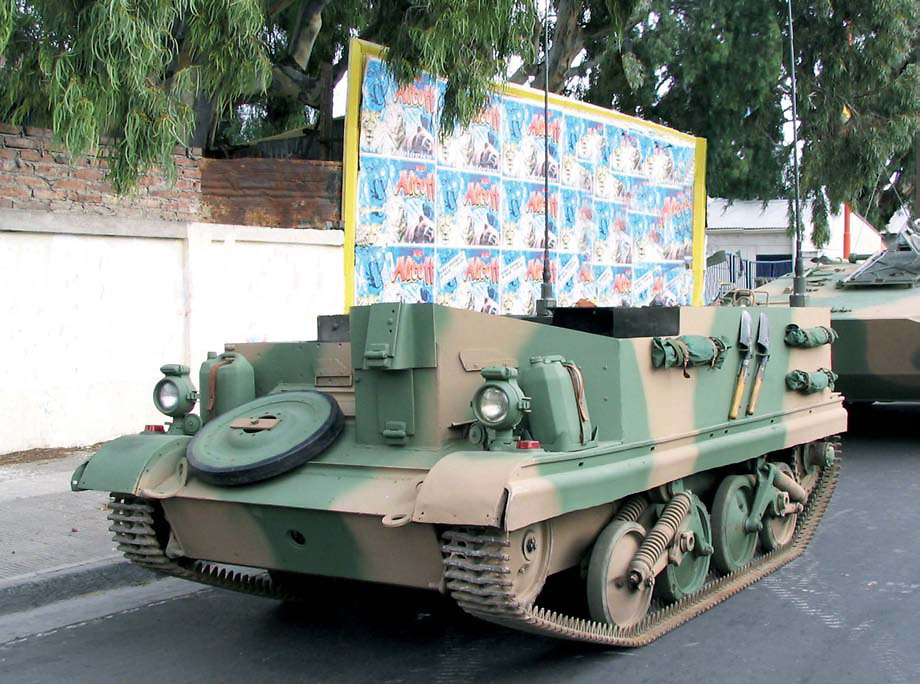 These vehicles arrived in Argentina between 1947 and 1948 and the vehicles were to be attached to the 1st Armored Cavalry Brigade (I Brigada de Caballeria Blindada) and later to the armor platoons of the Armored Recon Detachment (Destacamento de Exploracion Blindada), Motorized Infantry Regiment (Regimiento de Infanteria Motorizada), Armored Rifles Regiment (Regimiento de Tiradores Blindado) and to various military schools. Of 300 T16 supplied to Argentina, 180 went to the army, 90 to the navy, several went to the police (Gendarmeria Nacional, 2 Cuerpo Guardia de Infanteria of Policia Federal Argentina) and the rest was used for spare parts. They participated actively in various civil clashes in Argentina from 1955 onwards (in Buenos Aires, they were used in 1962 and 1963). Regimiento de Infanteria 1 “Patricios”, a ceremonial regiment used mostly for parades had two of these vehicles, Regimiento de Granaderos a Caballo General San Martin – a regiment with the dedicated duty of protecting the president, had some as well in its armored platoon (it was generally located at Agrupacion Talleres Fabrica General Paz, Villa Martelli, northern outskirts of Buenos Aires).

During their service, T16′s were used for various duties, some were used as testbeds for unusual weapons, such as two PAPI (Proyector Antitanque Para Infanteri) launchers – a PAPI was essentially a copy of the German Panzerfaust. Another version was equipped with six-barrelled 105mm Argentinian recoilless rifle. Another one was equipped with a “Czekalsky” recoilless rifle and more were used to tow the 120mm Brandt mortars. T16′s were used as tractors as well, for example during the official funeral of Maria Eva Duarte “Evita” Peron on 11.8.1952. 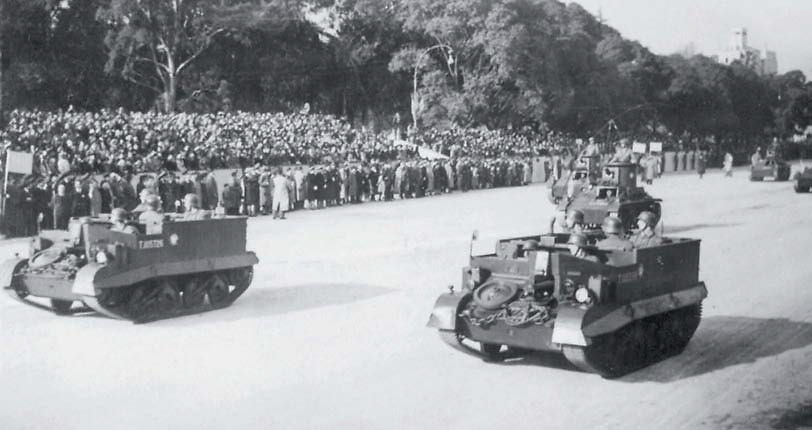 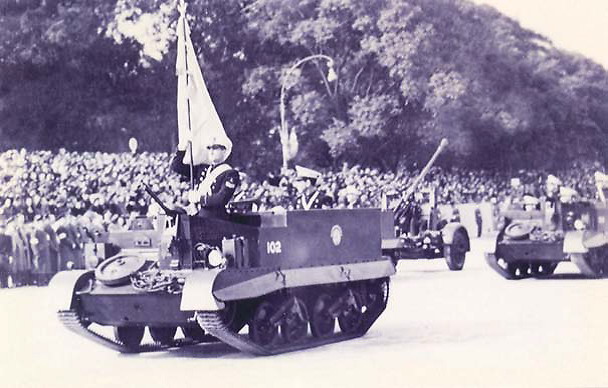 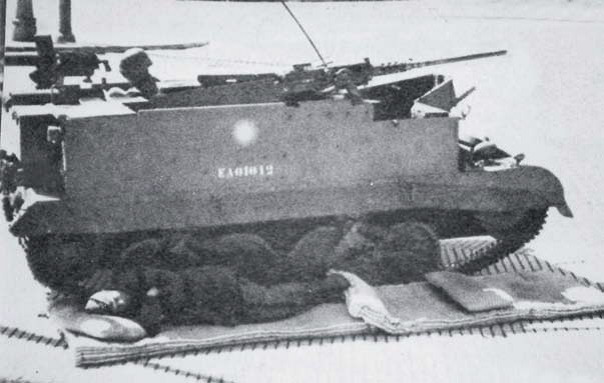 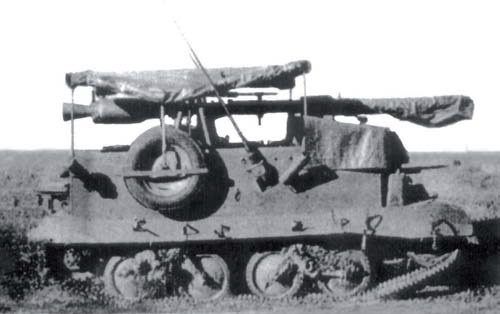 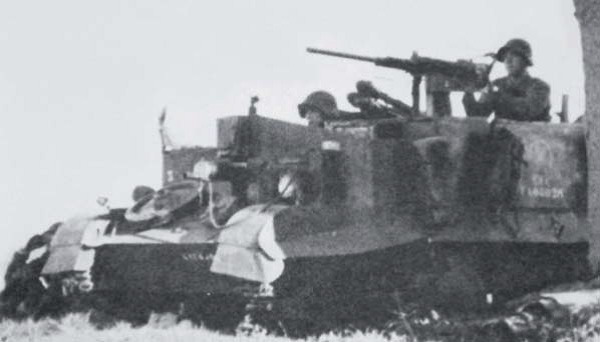 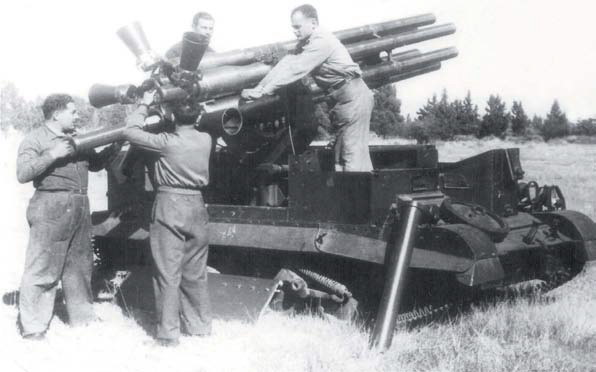 T16′s served in the army until 1981 – the last army unit to use them was Palermo Compañia de Policia Militar 101 (MP company 101), which had four. These were equipped with two M2 Browning .50cal machineguns and one 7,62mm Mod 1919 machinegun. Regarding the navy use of the T16′s, these were attached to the 1st Special Forces Batallion (Batallon de Tropas Especiales Nº 1), located at Batallon de Artilleria de Costa. A few were sent to the Amphibious Recon Company of 1st Amphibean Vehicle Batallion (Compañia de Reconocimiento Anfibio, Batallon de Vehiculos Anfibios Nº 1), a few more were given to the 1st AA Regiment (Regimiento Antiaereo Nº 1). These too were used on numerous occasions to quell the uprisings throughout the country, especially two large ones in 1955, when they were used to guard the perimeter of the Belgrano navy base in Buenos Aires. The navy too tested them with various armaments, including various machineguns: 7.65 mm Lewis, 7.65 mm Colt, Mod Arg. 1928 or Madsen Mod Argenti no 1926. These too were used to tow guns, such as the 37mm AA guns, M-20 recoilless rifle, 75 mm DGFM Mod Arg. 1950 artillery piece and sometimes they were used to tow planes as well.

10 thoughts on “T16 Carrier in Argentina”