as you probably know, when it comes to the Lend-Lease help to the Soviets, Britain became one of the largest exporters of armor to the Soviet Union. Three major types of armor were exported from Britain – the Matilda II infantry tank, the Valentine and later on, the Churchill (another mass-exported thing were the Universal Carriers, but that doesn’t really concern this article). Today, we are going to have a look at the first one.

The following video (posted on Yuri Pasholok’s blog) shows Matildas being loaded on their way to Soviet Union.

The first Matilda II tanks arrived in Soviet Union in late 1941 – including these ones, Yuri Pasholok found out – based on their numbers – that these particular tanks arrived on 18.12.1941 and all three were assigned to 172nd Tank Batallion. Between 1941 and 1943, 1084 Matildas (more than one third of the entire production of 2987 vehicles) were shipped to the Soviet Union (of which, only 918 were recieved by the Red Army, the rest got apparently lost along the way, sunk in the destroyed convoys and such).

The Soviet Matildas saw their first use during the battle of Moscow – at that point, 145 Matilda tanks were delivered to the Soviets and only a part of them was used. The first units to recieve Matildas were the 170th and 171st Tank Batallions of the South-Western and Kalininsk fronts – the 170th had 13 Matildas for example. However, the role Matildas played in the defense of Moscow was very minor – of all the tanks participating in this operation, lend-lease armor (and that includes Valentine III tanks) made for only 2 percent.

The first Matildas arrived with their “summer tracks” on – these provided reduced traction and stability in the snowy and icy Russian terrain to the point of tanks sliding off the road and ending on their sides, an issue that had to be fixed by mounting additional grousers. Another issue was the cooling system (specifically the radiator) freezing solid – this sometimes happened even when the engine was running. The Soviets liked the massive armor of the vehicle and its relatively powerful gun (compared to T-26 and BT series at least), but the engine and drivetrain were considered very complicated and the plates, covering the suspension were also source of endless “amusement” for the Soviet troops, because when driving through muddy terrain, the mud got under the plates and froze there – it took considerable effort to remove after that and in worst cases could cause a breakdown, immobilize the tank. The Soviets also considered upgunning the Matildas with their own 76,2mm ZIS-5 gun from the KV-1 (along with heavy modifications of the turret), a prototype was made, but in January 1942 the program was scrapped because the worst crisis was over. 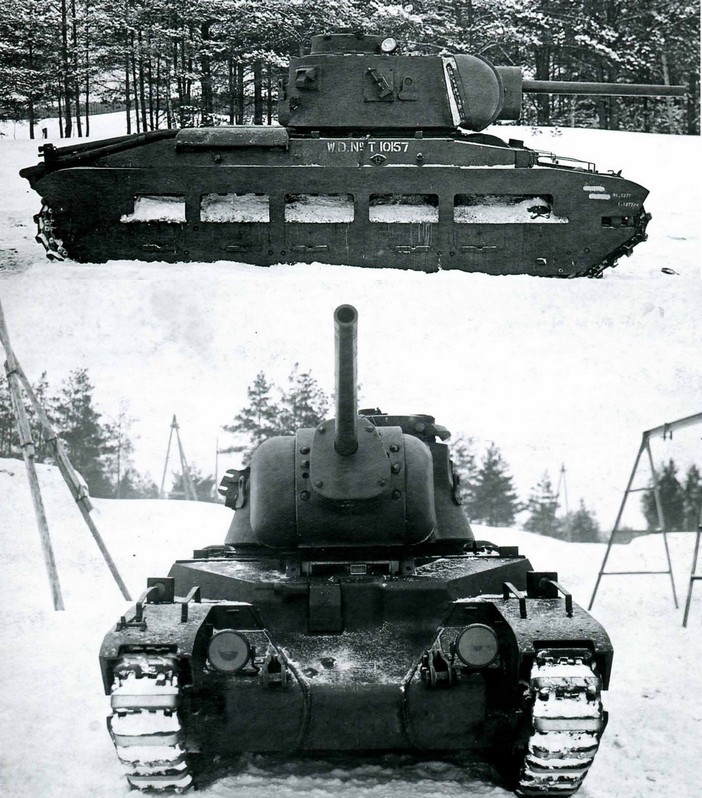 Interestingly enough, the Soviets also noted that most of the combat Matilda losses on the eastern front were caused by bad cooperation between Russian infantry and the Matildas. In January 1942, the 170th Batallion with its 13 matildas went into action – on 23.1., Matildas attacked the village of Georgievka. Germans, seeing the advancing tanks, started retreating to the village of Maltovitse. The tanks advance was halted and they waited for the infantry, but the Russian infantry dug itself in at the outskirts of another village without bothering to inform the tanks. The Matildas expended their ammunition and had to retreat, learning only afterwards that the attack was called off.

In February 1942, during the heavy fighting for the city of Kholm, a company of Matildas was attached to the 128th Rifle Regiment of the 391st Rifle Division, assigned with the task of attacking the enemy positions on the southern part of Kholm. The operation was worked out in detail and took the one meter of thick snow into account. It’s also worth noting that one of these Matildas was rearmed with a 45mm gun

The engineers cleared the streets (assigned for tank advance) of mines and the company (with Russian infantry riding on the tanks) was tasked with supporting the infantry itself (the infantry was supposed to disembark as soon as they encountered the enemy). On 13.2.1942, in noon, the entire column started moving. The engineers however did a poor job and in the end, three Matildas were knocked out by mines. The infantry was in turn pinned down by heavy enemy fire from the buildings and could not support the Matildas properly – it took massive casualities while the Matildas were practically stuck waiting for the engineers to clear the road. Four more Matildas were lost before the attack was called off. In the end however, between 15.2. and 20.2., the 170th Batallion Matildas managed to destroy 5 AT guns, one armored car, 4 machineguns, 12 mortars, 20 cars and two companies of infantry. Each tank fired every day 200 40mm rounds and 5000 machinegun rounds. The Kholm battle also showed that the tank had extremely resilient armor, when some were hit 17-19 times by enemy 50mm guns and not a single round penetrated the armor. The total losses in the battle for the 170th Batallion were 8 Matilda tanks and 4 T-60 light tanks.

The Matildas fought with several Fronts, specifically the Western Front, Bryansk Front and North Caucasian Front until as late as early 1944. For example, in December 1943, the 5th Mechanized Corps of the 68th Army of the Western Front still had 79 operational Matilda tanks.

11 thoughts on “Matildas in Soviet Service”