Let’s have a look at some Russian sources on this. The history of the T-54 tank started in the Fall of 1944, when the Nizhny Tagil designers created as a “side project” a proposal for very strong modification of the T-44 medium tank, designed to further improve the protection and firepower of the T-44 while keeping the adequate level of mobility and terrain passability. The first documents and drawings were shown to the Tank Industry Comissariat in the last days of October 1944 and on 1st of November 1944, the comissar, V.A.Malyshev signed an order for the Plant No.183 to create a prototype.

This first project wariant still lacked many of the advanced features. It used the old transmission and old tracks, but despite that the first prototype went to trials in the beginning of 1945. In February 1945, first factory trials of the prototype took place. This new vehicle, in accordance with its purpose, was heavily armored. The frontal plate was 90mm thick (according to different source however, the frontal armor was 120mm thick), the sides were 75mm thick and the rear armor was from 35 to 45mm thick. The turret was sloped to the back somewhat and the driver’s hatch was in the sub-turret armor plate. This is the armor schematic from the alternative source:

The 120mm armor is however mentioned more times, so it’s possible that that number is more likely. The frontal turret was either 160mm or 180mm thick (varied from prototype to prototype).

The vehicle was powered by a V-2-44 520hp diesel engine, that, thanks to the way it was positioned in the hull (across), allowed for significant savings of internal space. The suspension was completely taken from the earlier T-44 (five roadwheels on torsion bars per side). The vehicle weighed 35,5 tons, maximum speed was 44 km/h. 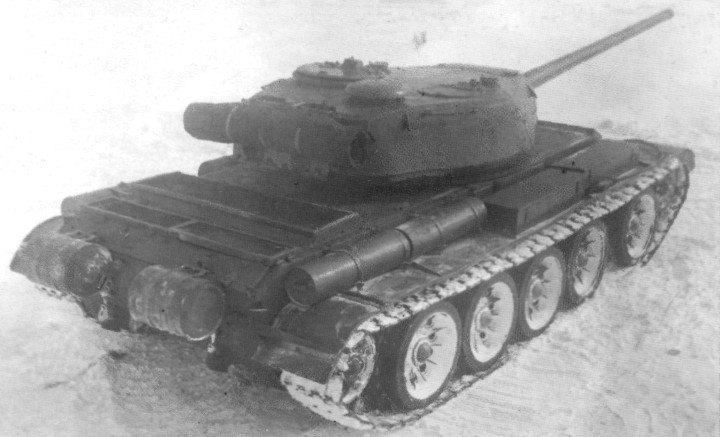 The main gun of this tank was the 100mm D-10T-K gun, this was actually the first time a regular Soviet tank (without strong modifications to the turret) could carry a 100mm gun. The D-10T-K variant different from the original D-10T with the lack of the spring counterbalancing mechanism – in order to balance the gun, certain parts were made lighter instead (and certain parts were made heavier). The D-10T-K gun could fire an AP tracer round BR-412 and penetrate 120mm of armor at 1000 meters. The later 1945 prototype was apparently equipped with a LB-1 gun.

Silentstalker: two things – first: for the game purposes, this is just a regular D-10T gun, balistically it was the same. Second: just to be clear, the counterbalancing does NOT mean gun stabilization.

The new tank was brought to Moscow on 22.2.1945, where it was introduced to the chiefs of tank industry and the military. On 11.3.1945, trials at Kubinka proving grounds started and they took a little over a month. During these trials, the prototype managed to drive over 1500 kilometers and the results were clear: T-54 was superior to all contemporary Soviet tanks. The testers did notice some issues however and suggested fixing them, notably the turret design, use different type of tracks, switch the transmission for something else, to equip the tank with anti-HEAT spaced armor plates and to update the set of optics (both gun and vision) to something modern. The Plant No.183 complied and by June 1945, two more prototypes were built with over 60 various improvements. One of them had planetary transmission, the other had planetary steering system. The second prototype was deemed more perspective and was heavily tested. Further improvements were made (at that point around November 1945, over a hundred), which resulted in what we know as “Model 1946″ (basically, a stock ingame T-54).