the M36 Jackson tank destroyer served in the Balkan region for practically 60 years, which is not very usual for wartime tech (the T-54 medium tank for example does have a very long career as well, but that’s not a wartime vehicle, at least not in the way the Jackson was). The Jacksons participated in practically all the conflicts in the Balkan region from 1991 to 2001 and the last pieces were withdrawn from service in Serbia and Montenegro in 2005 – at that point, the vehicles had 60 years of service behind them. 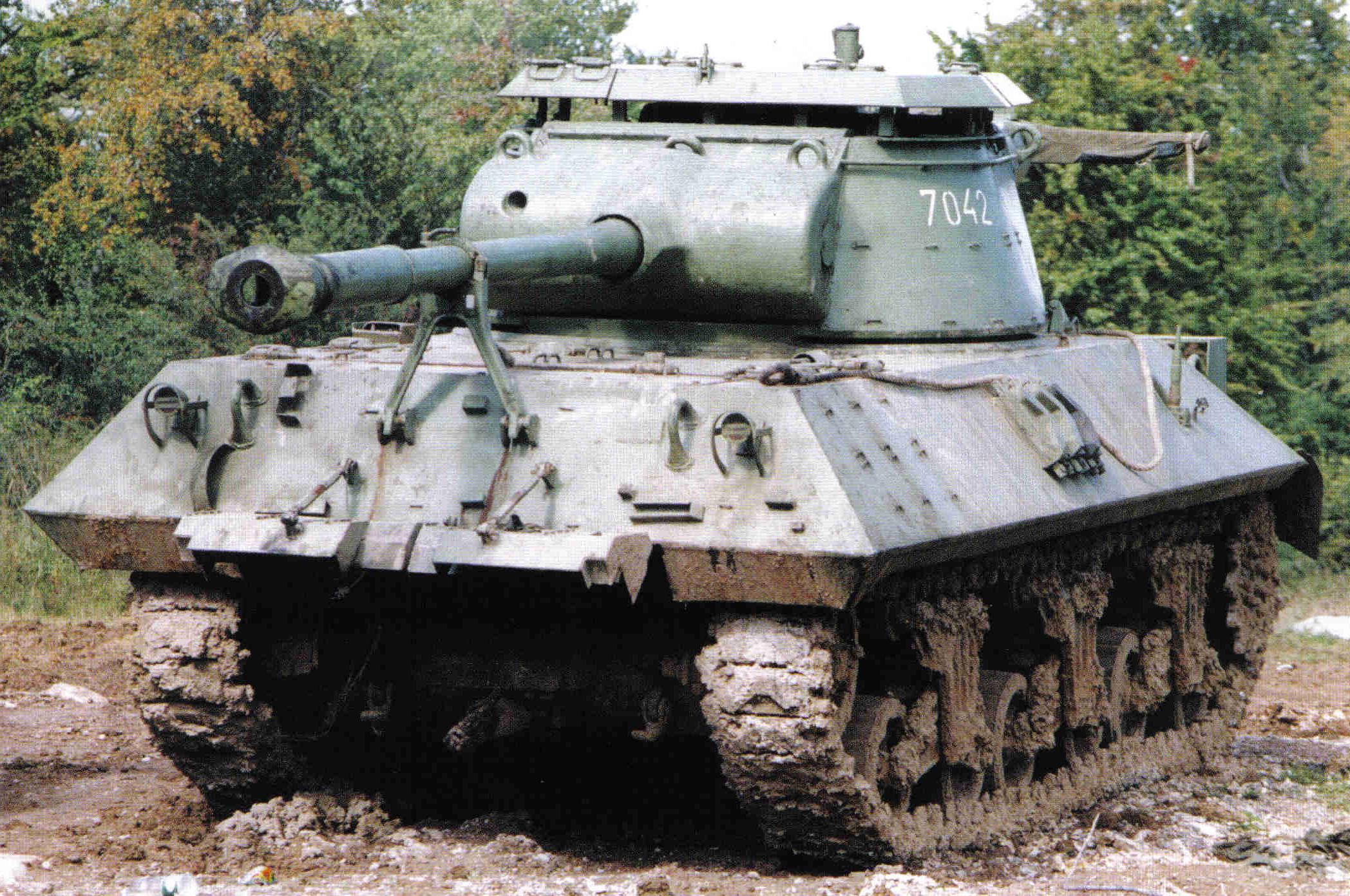 The M36 GMC self-propelled guns were sold to Yugoslavia during the Yugoslav-Soviet crisis, when Yugoslavia was threatened by the Soviets and their eastern bloc allies. It all started in 1948, when Moscow heavily criticized the Yugoslav leader, Josip Broz Tito for not bowing down to Stalin and for not following his directives. Along with the threats came embargos on various things, including military technologies and arms. Border clashes between the Yugoslav and the eastern bloc troops also happened and there was a general fear that Yugoslavia would be pulled forcibly into the Soviet bloc.

The Americans decided to help Tito by offering military aid. It was believed that if there was an armed conflict, the Soviets would use large numbers of armor they had at their disposal and so the American offer to Yugoslavia included many anti-tank vehicles and guns, including the AT recoilless guns, bazookas, tanks and wartime tank destroyers. Amongst them were of course the surplus Jacksons, coming from the 1944 and 1945 wartime production runs. These vehicles were also refitted during the Korean war, their gun was upgraded from the original 90mm M3 to the M3A1 model. Two basic variants were sold to Yugoslavia – the M36B1 (with a M4A3 Sherman hull) and M36B2 (based on the M10 Wolverine hull). Both variants’ hulls were produced between 1942 and 1945.

The first 10 pieces of the M36B2 variant were accepted in service by the Yugoslav People’s Army (YPA) in 1953 as a part of the American MDAP aid program. More shipments of Jacksons followed until 1957 (when the MDAP program ended) and altogether, the Americans transferred 399 of these tank destroyers to Yugoslavia between those years. The first units to be equipped with the Jacksons were those units, who would be potentially facing the Soviet invasion. The Yugoslav infantry regiments recieved batteries of six M36 Jackson tank destroyers, the commanders of Yugoslav infantry divisions had detachments (“diviziony”) of 18 of these tank destroyers at their disposal. Yugoslav tank brigades had batteries consisting of four of these vehicles and in order to defend Yugoslavia against eastern bloc aggression, 14 anti-tank regiments (consisting mainly of the Jackson batteries) were formed.

According to the Americans, the large numbers of M36 tank destroyers were quite enough to stem the Soviet tide, as the 90mm gun could penetrate the frontal armor of the most numerous Soviet tank at that point, T-34/85. The Yugoslavs disagreed however, estimating that the Soviet Union would attack also with the modern, well-armed and armored T-54 medium tanks. That’s why the Yugoslav 1957 war plans no longer counted on direct confrontations between the Jacksons and the enemy tanks, it was assumed the M36′s would have to rely on flanking maneuvers.

What however made the situation much easier for Yugoslavia were two things. First was that the Americans, along with the Jacksons, also sold Yugoslavia a number of the relatively modern M47 Patton II tanks. These used the same ammunition as the Jacksons, making the logistics easier – the M47 would heavily influence the Yugoslav native tank development for years to come, but that is a story that was already told on FTR. Second thing was that the 90mm ammunition was also produced locally. Even during the MDAP program, the Yugoslav military technology institute (VTI) prepared for the local production of the ammunition and between 1955 and 1959, new indigenous HE shell (M 67) was developed. Furthermore, VTI developed a slow-rotating HEAT shell M 74 – the initial series of these shells was produced in 1974 and it proved that with it, the Jackson can penetrate the armor of then-modern tanks at two kilometers (the penetration was cca 300mm of armor). It took 1,5 seconds for the shell to traverse this distance with very good accuracy, allowing the Jacksons once again to snipe at enemy tanks while being out of range of enemy guns. The ammunition was produced in the “Pretis” factory near Sarajevo and was soon issued to the M47 and M36 units.

Since mid 60′s, the Jacksons were attached to combined arms units, equipped also with ATGM’s – at first, those were the Soviet first-generation 2P26 Shmel missile launchers, replaced in the 70′s by the Malyutka sets. The thawing of the relations between Yugoslavia and Soviet Union during the “destalinization”, followed by purchases of Soviet equipment, seemed to spell the end of the M36 career, one Yugoslav document from 1967 includes the assessment that the M36 is obsolete and that it should be replaced by the towed Soviet 100mm M12 AT gun. This change indeed happened in the “A” divisions and the obsolete vehicles were moved to the “B” units (basically second-line units and reserves). The M36 persevered however and survived the great army upgrades of the 70′s and 80′s, simply because the Yugoslavs haven’t found anything better to replace them with – they especially valued the ability of the Jackson to support infantry. The Soviet T-12 100mm guns were more powerful, but given the fact they were towed, they had limited mobility compared to the Jackson. That’s why the Yugoslavs kept the Jacksons running and included some upgrades to boot.

In order to keep the vehicles in working conditions, the old obsolete Ford GAA V8 450hp engines were replaced with the engines from T-34/85 (V-2, producing 500hp). Furthermore, every imported American vehicle recieved an indigenous IR driver device M 63 for night driving. The Yugoslavs also considered replacing the Jackson (and the Hellcats and SU-100′s, which the YPA also had) with an indigenous tank destroyer/self-propelled gun, armed with the T-72 smoothbore 125mm 2A46 gun. This happened in 1980, but the proposal was scrapped in 1982. With any real replacement still missing, the Yugoslav M36′s were left in service until 1991, when the civil war started and so, decades after defeating the nazi armies, the old GMC’s went to war once again.

Civil War and Beyond

Practically all the parties, involved in the fighting, used these venerable machines as infantry support vehicles. They however were rarely organized as earlier (into batteries), as no massive tank incursions were expected anywhere. And so, the old YPA batteries were dissolved and single Jacksons (or pairs) were attached to infantry batallions, sometimes even to platoons. This in turn gave tactical units some very strong firepower, allowing them to batter the enemies into submission. The Jacksons proved themselves especially well in the mountaineous terrain of Bosnia and Herzegovina – their excellent gun elevation allowed them to shoot even at targets very high above in the mountains and on the ridges. These vehicles often carried applique armor – plates of reinforced rubber on their sides in order to protect them from HEAT shells. 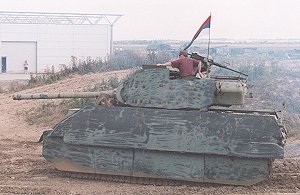 After the civil war ended, the Jacksons were removed from service in Slovenia, Croatia and Bosnia because of increasing obsoleteness, maintenance issues and breakdowns. A part of Jacksons from the Serbian stocks was sold to private collectors from the UK and the USA, who are often even today parading the vehicles with their original civil war paint on, including the Serbian tricolors and the rubber shields. The civil war Jacksons were often “decorated” with various inscriptions – this Serbian M36 has “Bjesna Strina” written on the turret (“furious aunt”?), the rear inscription says “Bjezhi, ujo” (D.Jovanovic claims it means “run, Ustasha”, referring to the wartime fascist Ustasha movement, other interpretation could be “run, uncle”).

During the last years of service in the Yugoslavian Army, batteries of 6 Jacksons were transferred to motorized/mechanized infantry brigades. The M36′s, located in Kosmet (Kosovo, Metohia) were used for fire support during the quell of Albanian uprising in 1998-1999. After the NATO air raids started against Serbia in 1999, these vehicles, as well as other armor, were dispersed into forests and hidden. The only losses incurred were when moving – one A-10 Thunderbolt II destroyed one M36 from the 125th Motorized Brigade on the road from Pec to Djakovica. Another M36 from the 243th Mechanized Brigade broke down on 17.4.1999 on the road near the town of Vitina (southern Kosovo). A repair vehicle, one truck and one BOV armored car were dispatched to recover it, but the weather cleared and the NATO pilots spotted the effort, attacking immediately – the operation was disrupted and the M36 Jackson was lost.

The last operation of the Jacksons took place between 2000 and 2001, when they took part in the Serbian operations against Alban terrorists in southern Serbia. They were used from cover, shelling the OVPBM positions (OVPBM – “Rebel Army of Preshevo, Buyanovec and Medvedje” was a guerrilla group, their goal was to secede the southern Serbia region and join Kosovo). The fighting got especially fierce in the village of Lučani, where the Serbian special police forces controlled a part of the buildings and the other part was controlled by the guerrillas, who were very well dug in. Since the rebels had a large number of RPG’s, the Serbians directed the Jackson fire at long distances, shelling the hideouts. These were probably the last shots ever fired in anger from weapons manufactured during WW2. The insurgency ended in June 2001 by disarming the guerrilla group. The Serbian army’s reaction was building a chain of bases in southern Serbia in order to monitor the people movements there – these bases were also equipped with Jacksons.

The reorganization of Serbian army in 2004 saw most of the remaining Jackson units disbanded and the rest of the surviving M36′s was pulled from service in 2005 (at that point, the army still had 203 surviving Jacksons). Unfortunately for collectors and such, the decision what to do with the vehicles was very swift – they were cut to pieces and sold for scrap, a sad ending for the vehicles, weathering the storms for decades and surviving a civil war.

65 thoughts on “M36 Tank Destroyer in the Balkans”