As a small nation, Finnish Armored Forces resorted mostly to captured or bought equipment. They still had one unique vehicle that should prove interesting to WoT players and could easily be seen implemented in the game. This vehicle was the BT-42, an improvised Finnish Assault Gun.

In order to add more firepower to their armored Brigade – mostly equipped with obsolete T-26s, the Finnish army resorted to indigenous improvisation. Finnish troops had captured a plethora of BT-7s which couldn’t be put into use as such, but they were erroneously deemed suitable as platform for a new improvised assault guns, the BT-42. In total, 18 captured BT-7s were converted to BT-42s from 1942 onwards. In Valtion Tykkitehdas, they were fitted with a new turret, that shared some likeness with the dreaded KV-2, although it could be only barely called armored.

Blueprints of the turret 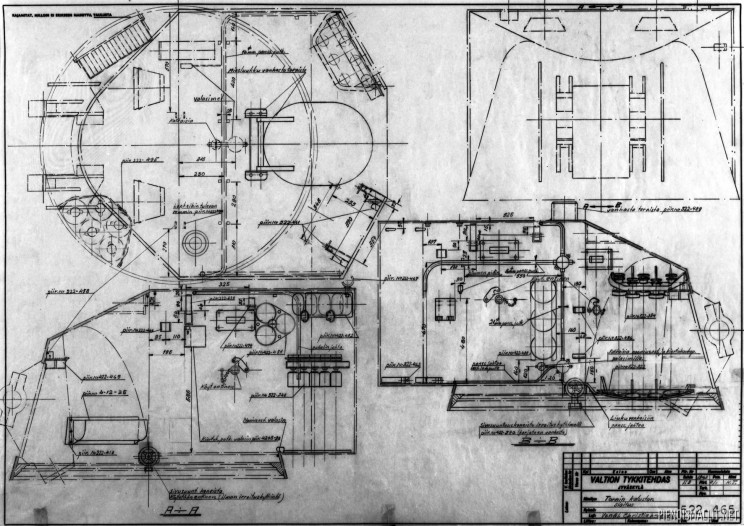 KV-2-like look was even more clear after the guns were installed. They were the British Q-F. 4.5 inch Mk II howitzers, that had been donated by the British to the Finnish army in the Winter War. Finnish called this gun 114Psv.H/18 (114mm tank howitzer).

Likeness to KV-2 is curious, although BT-42 lacked almost any armor protection. How overgrown can a BT be? 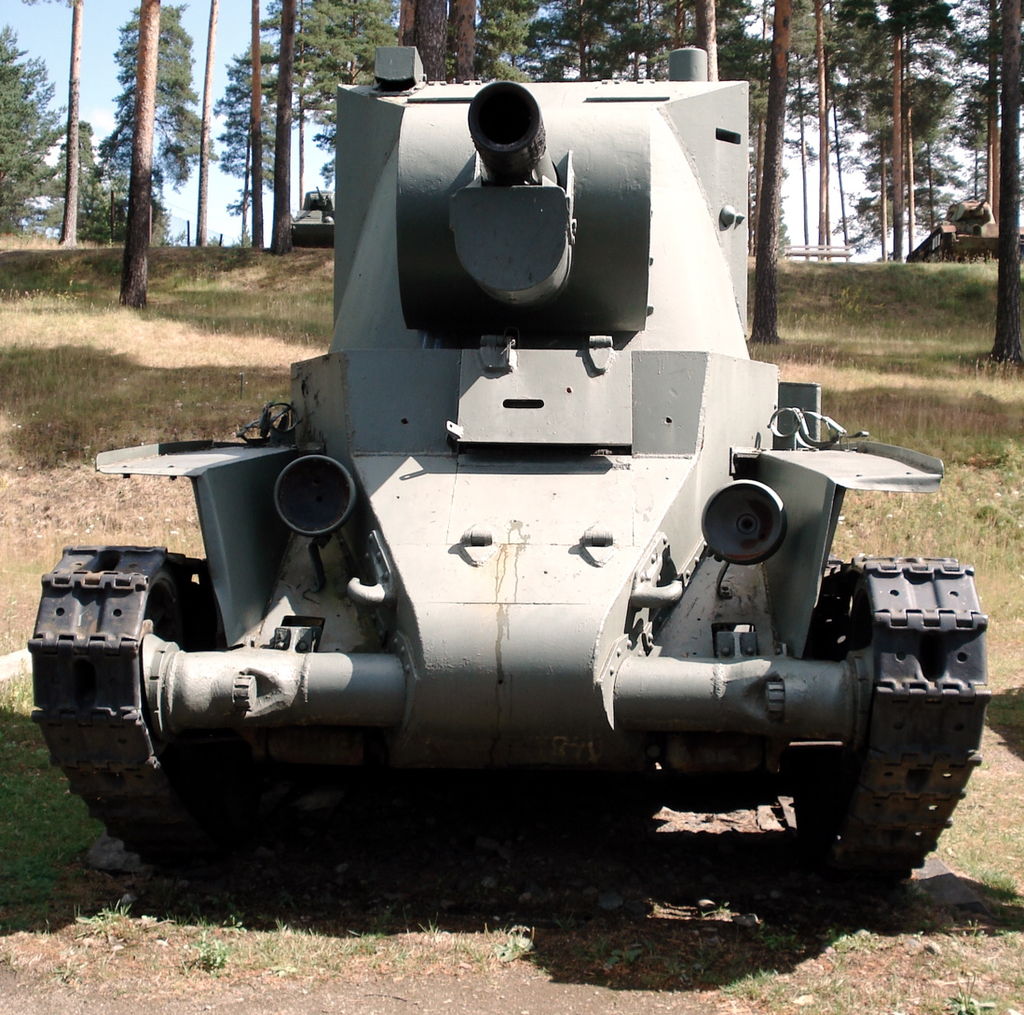 A drawing from Tankomaster magazine 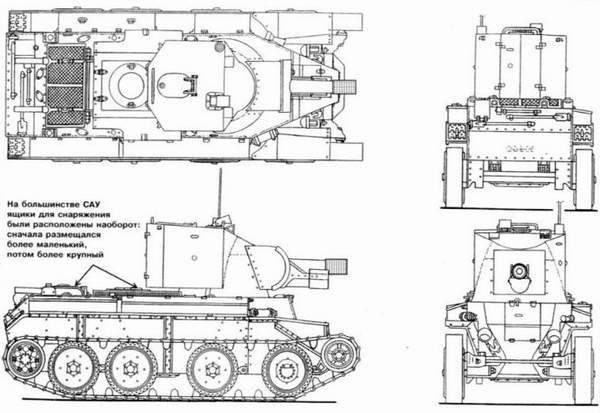 Even if BT-42 performed well in both indirect and direct fire against infantry and pillboxes, it proved to be ill-suited against any enemy armor, even after they were provided with indigenous Finnish version of HEAT ammunition. These tanks were mechanically even more unreliable than the original BT-series due to added weight. Vehicle had balance problems and the silhouette of the vehicle was tall, making it an easy target – a weakness that was complemented by weak armor (6 to 16 mm). As a nail to the coffin, the turret was partly riveted, so even non-penetrating hits had considerable chance of making rivets bounce inside the turret. Also, the rear doors were so thin that the vehicle was vulnerable to even some infantry weapons. Ammunition was loaded in two parts (like with Soviet 122mm), which reduced the RoF considerably and resulted in difficulties in ammunition storage. Also, the velocity of the shell was horribly low. The tank also lacked machine gun for defense against infantry.

BT-42 from behind. Notice the large doors, which were really thin and provided no real protection. 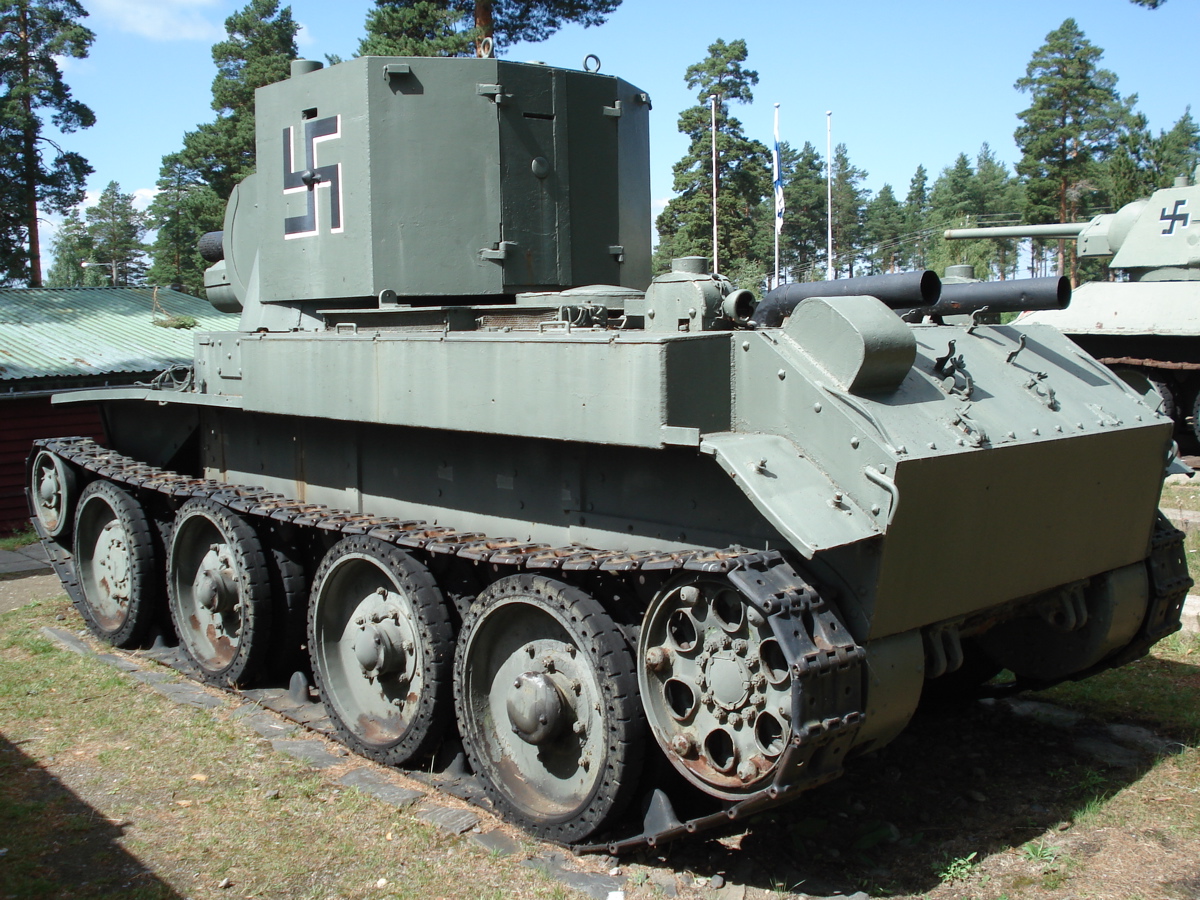 Even if the BT-42s were seemingly obsolete in 1944, they were still kept in service in Separate Armour Company. As they couldn’t be brought into front line fighting, they were added to the garrison of Vyborg, second largest city in Finland and only larger city in the vicinity of the frontlines. Red Army reached outskirts of the city on 19th of June and started its heavy attack on the city itself in morning of the 20th. The BT-42s were hurried into battle, but were both outmatched and heavily outnumbered by T-34s, IS’s and other more modern, rather heavily armored tanks. Few BT-42s managed to engage the T-34s and scored plenty of hits, of which none did any damage. This might have been partly due to somehow faulty HEAT ammunition, as in tests those shells had been able to penetrate 100mm of steel at 70 degrees. As panic spread amongst the ill-prepared defenders of the city, the BT-42s disengaged to cover the withdrawal and many were abandoned by their crews. The city, that was thought to be a part of the next main line of resistance fell in one day and a couple weeks later, the BT-42 was officially declared as obsolete and remaining tanks were withdrawn from service. It is sad that we don’t know how the vehicle would have performed as a SPG, providing indirect support, but as an assault gun, it proved to be a total failure.

Destroyed BT-42 of the company commander Stig Sippel in Vyborg: 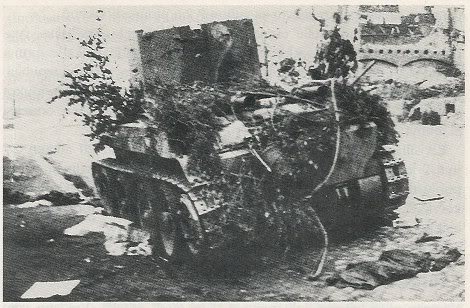 BT-42 would fit well into World of Tanks both as a SPG and TD, as many real-life SPG’s have already been implemented as such in WoT. As SPG, it would offer extremely high speed (comparable to Bat-Châtillon series arties) for a low tier SPG, which might prove a problem. In fact, it would be quite close to FV304 in performance. A bit slower, but would enjoy a turret. Even the armament would be same (Q-F 4.5-in is already implemented in game and FV304 has it!). As FV304 is already considered one of the most overpowered (and one still fun to play!) artilleries in the game, it is highly unlikely that a turreted version of such speedster arty would be added into game. As mentioned, another option would be add the tank as TD, that would be well in line with its intended role. As a TD, its gun’s damage of 450 would make it rather similar to 105mm howitzer, used by many TDs at tier 4 and 5. It is hard to assess if it should be tier 4 or 5 vehicle. It has paper thin armor, high profile and lacks a gun with any reasonable penetration (57mm with HE, something around 100mm with HEAT, if we presuppose that Finns got their HEAT working in combat situation) but on the other hand, it has good top speed, incredible hp/ton ratio and turret (albeit a slowly turning one). Depending on balancing (hp’s, soft stats etc.), it would make a great and rather unique t4 or t5 TD (think of a T49 with a derp gun!)

As there are no reasonable upgrades and available modules for the tank, it would best serve as a premium tank. BT-42 would fit nicely either in the European branch or Soviet branch (due to the origin of the BT-7). It would be a great occasion for Wargaming developers to add an interesting, different and historical vehicle to World of Tanks.