Let’s continue with the vehicle feedback for now. A few small points:

- some players reported crashes in the 9.3 patch, as well as a loss of performance. Let’s hope Wargaming works that out. Personally, I haven’t seen any problems in the patch.
- new explosions look… strange. Kinda like over-exposed photograph image, I’ll make a video and show you. 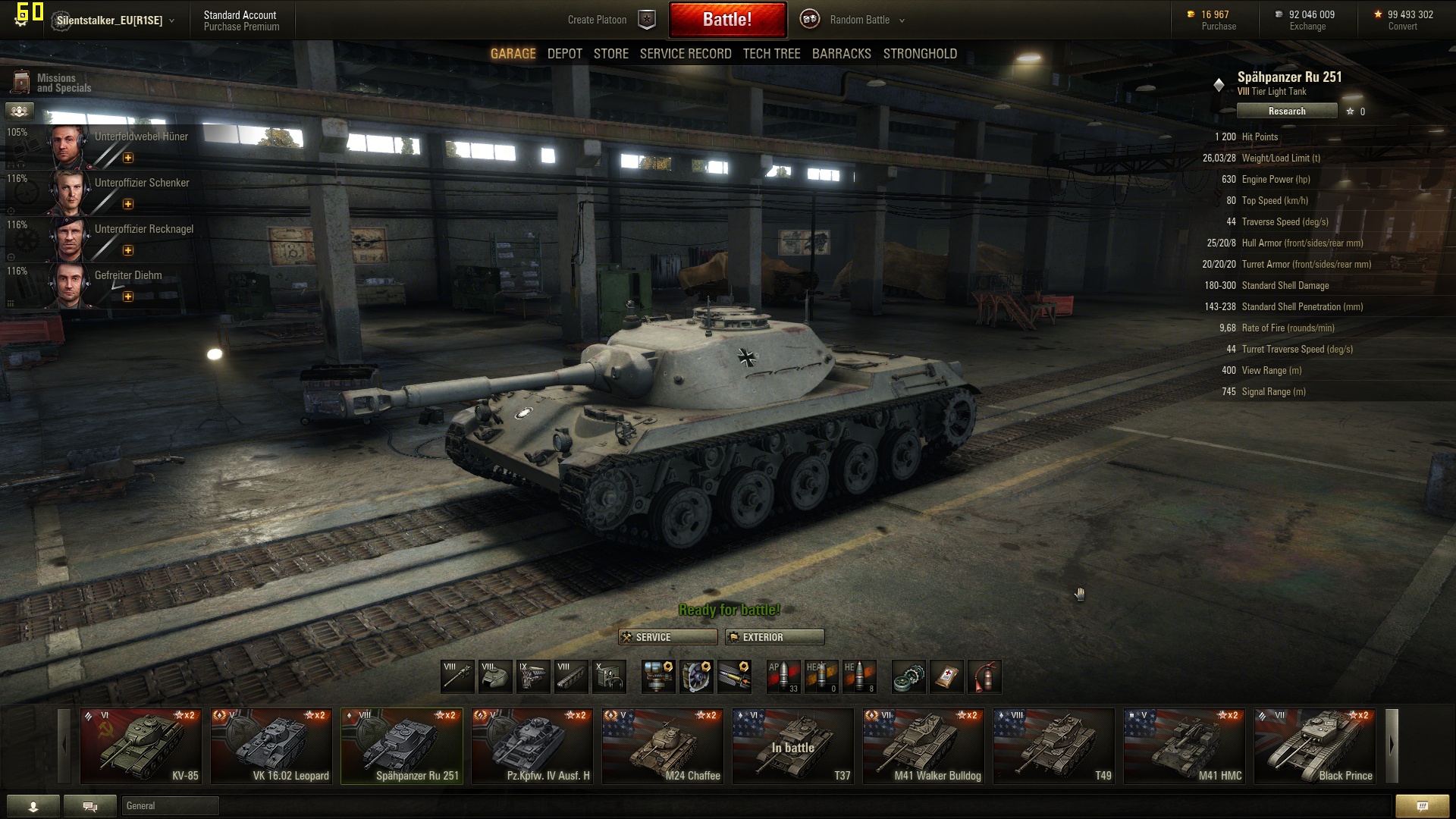 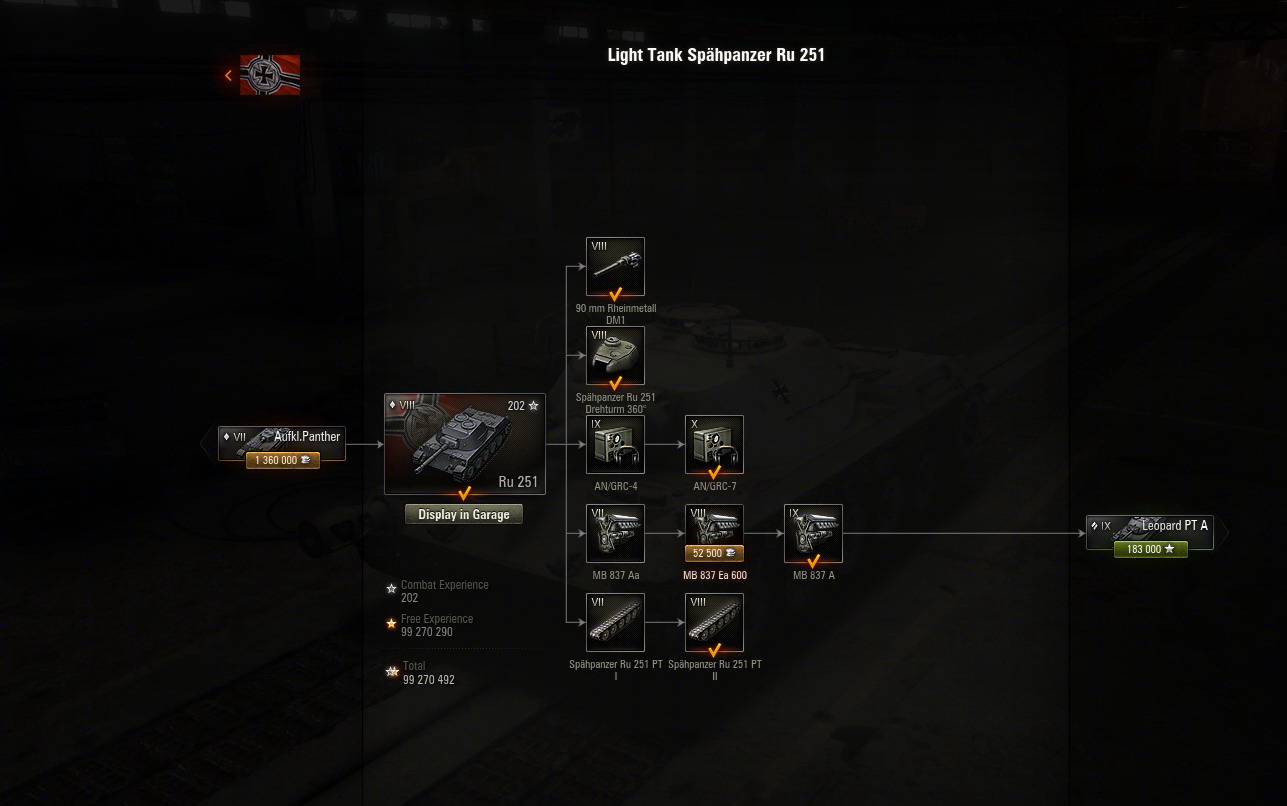 RU251, the new tier 8 German light tank, is one of the most expected tanks of this patch. It took almost two long years for this tank to appear from the point when it was mentioned for the first time, but don’t worry – it was worth the wait. Personally, I think the RU251 is an absolute pleasure to drive. It’s low, sleek and nimble and it’s FAST. Really, really fast. This of course is compensated by very thin armor (especially vulnerable to the T49′s derp). Terrain passability is okay, but not the best, for example climbing the Fjords hill will take you a while. From what I gathered, the key to survival (apart from passive scouting) is to stay on flat terrain, where you can outmaneuver pretty much all of your opponents, especially the “light” T-54 and the T49. If you like the maneuvering style of gameplay and possibly some active scouting, you’ll love this tank and it’s definitely worth the AFK Panther grind – the bad thing is, AFK Panther has completely different style of gameplay (do NOT try to ram anything in RU251, not only you will take a huge hit, but you’ll lose speed and speed is life for you).

Another drawback of this vehicle is that it has only one gun and one turret as an option. The 90mm gun is decent, but do NOT try to fire the HESH ammunition from it (it has HESH instead of standard HE) – it’s completely useless and any sloped surface or (heaven forbid) tracks and spaced armor hits will result in very low damage hits (it’s very poor even against other light tanks). With standard ammunition, you can outgun pretty much every other light tank (of course, AMX-13/90 with autoloader will mess you up, but you will outgun the T-54 Light, especially if you are moving around it).

Overall, I think this vehicle is very good. Now, if only AFK Panther was replaced by something with similiar playstyle, the German line would be perfect. 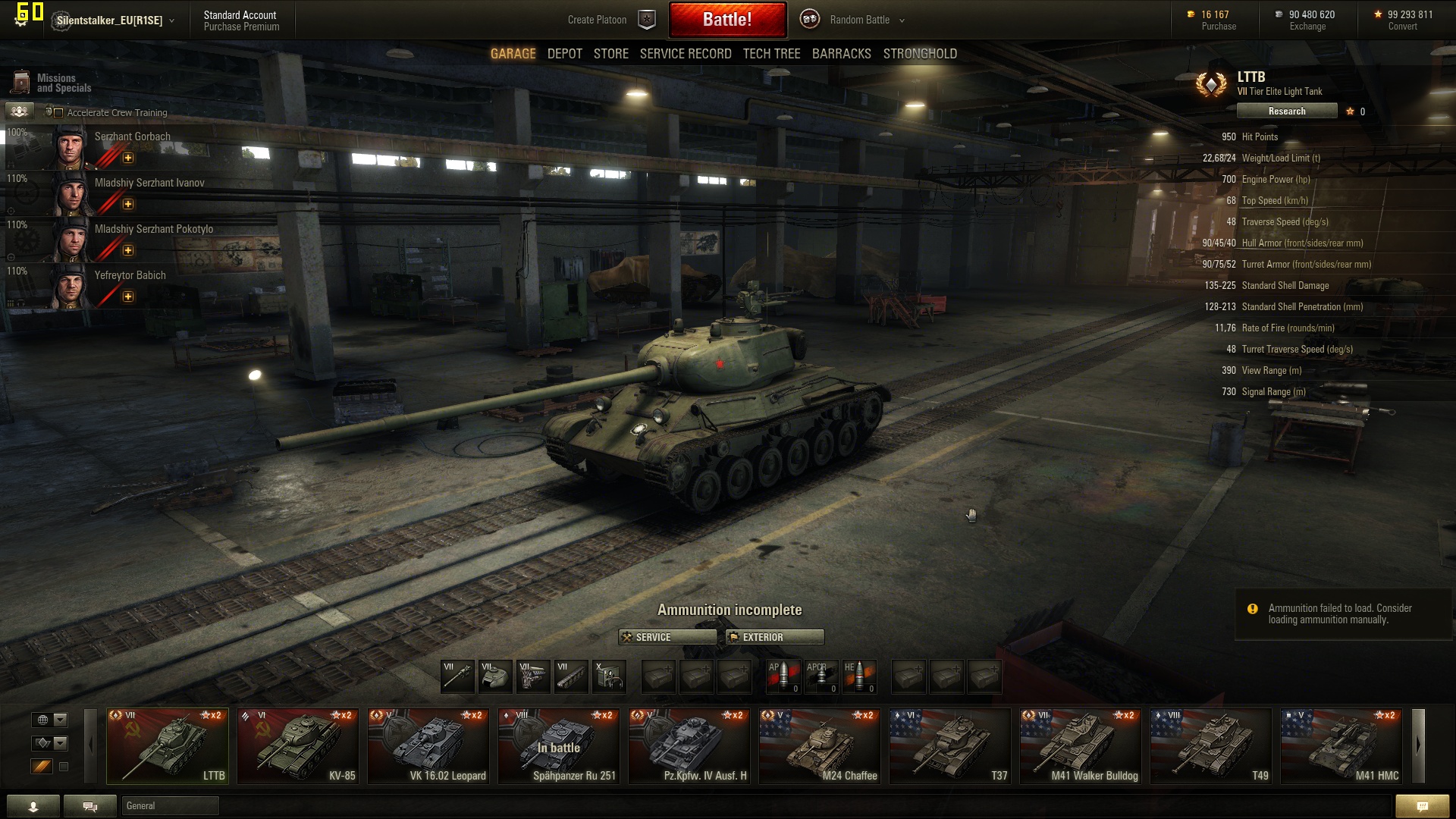 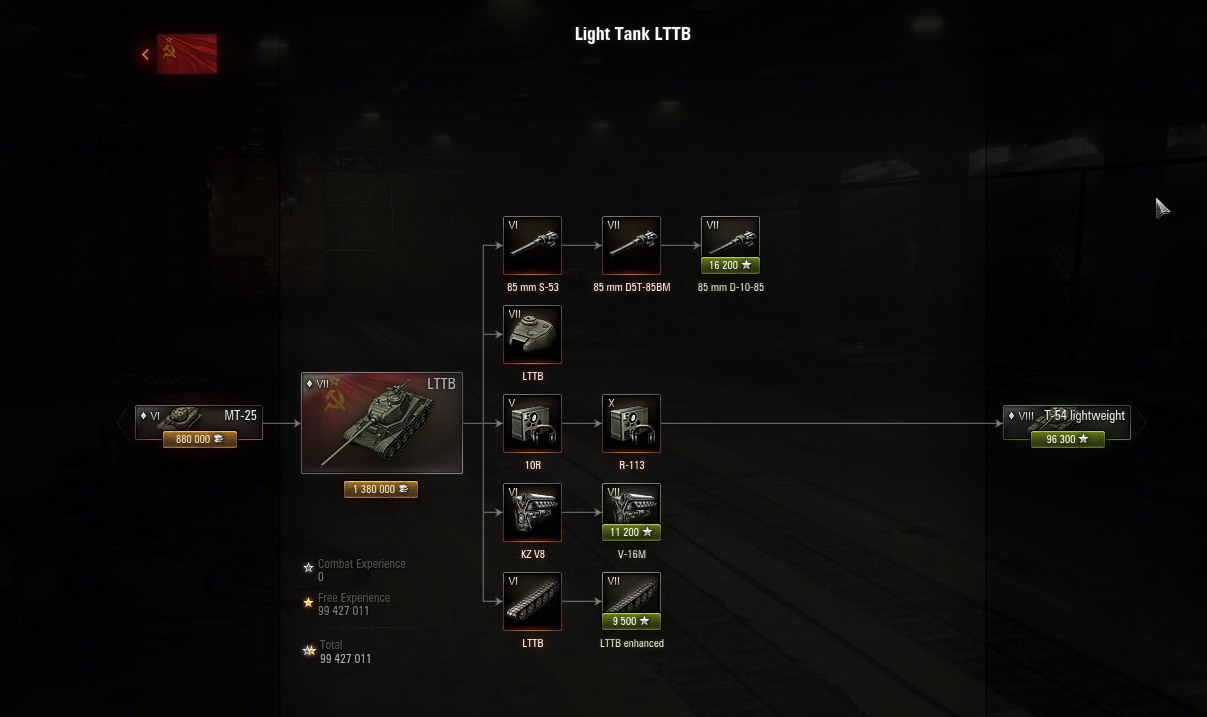 This is the new tier 7 Soviet light tank, following the MT-25 and let me tell you, it’s insane. For all intents and purposes, LTTB is the reincarnation of the T-50-2. It’s extremely nimble and fast (especially for it’s size – it’s rather large). Forget passive scouting – this tank is way too fast and way too agile for just standing in the bush. It’s also too tall for that, but who needs to stay hidden when you can outmaneuver pretty much everything on your tier?

Contrary to other light tanks, this vehicle also has some armor and yes, it will bounce shots to the turret, especially unaimed or wild fire, used in the thick of light tank combat. Sure, the hull armor isn’t that impressive, but again, it can occasionally bounce unexpected shots. Of course, armor is not the trademark of a light tank, but let me tell you, this thing is brutal. Then there is the gun. You might consider 85mm to be insufficient, but it is not so. The top gun is great – it aims fast, reloads fast and is reasonably accurate. You’ll cause a LOT of damage with this tank and you will have other vehicles at a disadvatage. The gun has only one nasty flaw – poor depression (-3), which can cause you to fire wide when driving on hilly terrain. Still, it’s a great, great tank – personally, I think that it’s overpowered in its current incarnation and will be nerfed in the second round of the test. I hope that the nerf won’t be too serious – because right now, it’s a lot of fun. 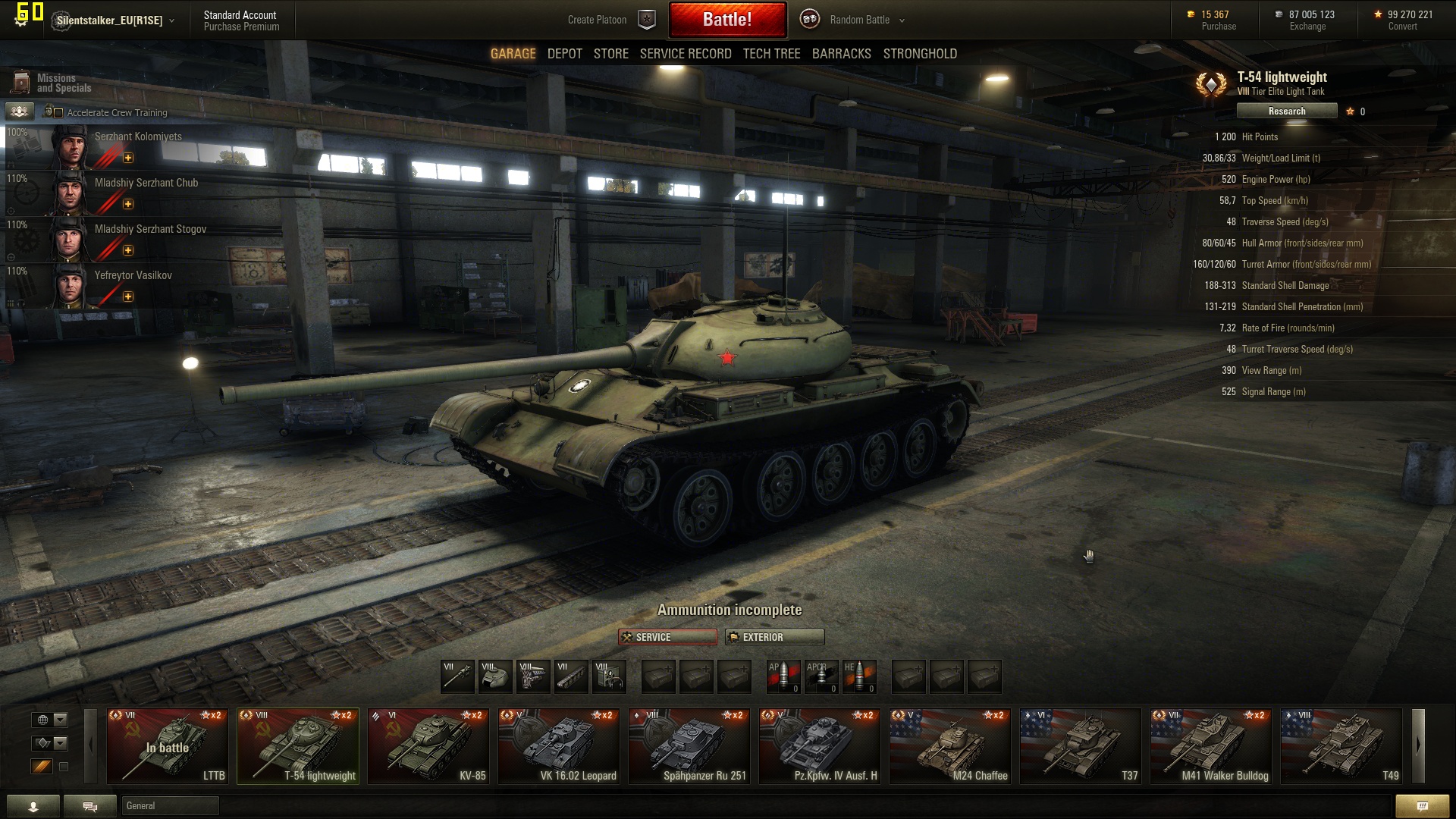 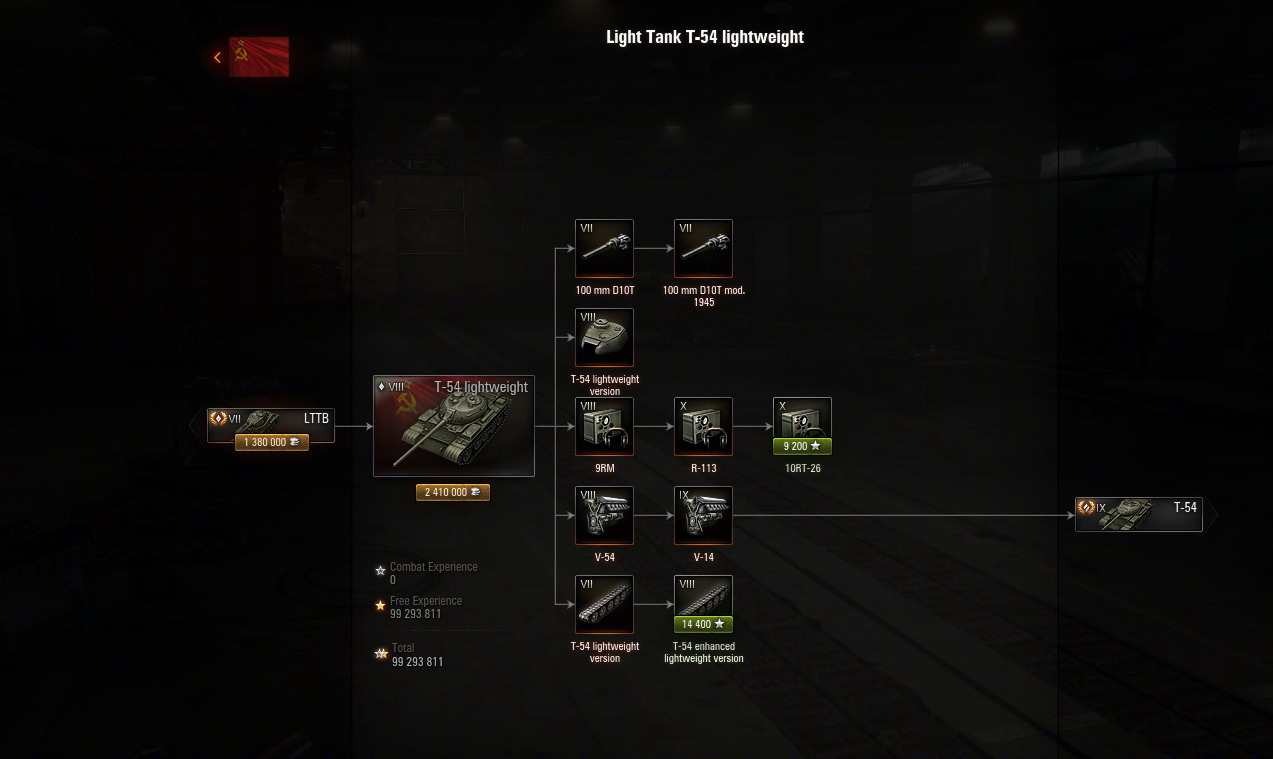 What can I say about this tank…

T-54 drivers will feel right at home, because for all intents and purposes, it’s a faster and nimblier T-54 (I know, absolutely shocking given its name). The trademark of this tank is (compared to all the other tanks, except the Chinese tier 8 light) its thick armor (80mm sloped hull, 180mm frontal turret) and relatively decent gun (100mm D-10T of two models). If you had the T-54 unlocked, you’ll have pretty much everything unlocked straight away (apart from the tracks, of course). Faster T-54, it sounds good, doesn’t it? Well, there is this tiny little problem with it: you are expected to scout.

The T-54 Light is pretty much anything but subtle. It doesn’t have that good a viewrange, that’s one problem. Passive scouting… I don’t know. For me it did not go very well. The vehicle is nimble enough for active scouting, but it doesn’t accelerate as fast as the RU251 for example and it will get outmaneuvered. The thick armor sounds good, but you have to realize two things:

- new autoaim (which is a very good idea to use when driving a light tank at full speed in close combat) aims for the hull, not for the turret anymore
- everything (and I mean everything) you meet will penetrate your hull frontally, even the T49 152mm derp can land some very nasty hits (you are not as vulnerable as the RU251, but it still hurts).

In this sense, the armor is all but useless, robbing you of perhaps the most positive aspect of the vehicle. The 100mm gun is good for dealing with softer targets and other light tanks, but you will NOT outdps other lights and if they aren’t stupid, they will kill you by circling/negating your armor advantage. Furthermore, the gun has a relatively poor depression and yes, it shows, especially in the heat of combat. I think this tank will be very situational, but I haven’t found the “sweet spot” tactics for it.

One odd thing: the vehicle is actually called “T-54 Lightweight”, which is odd and causes problems in the UI, because the name is too long (no idea who translated it as such instead of the simplier “Light”). I do believe this will be fixed. 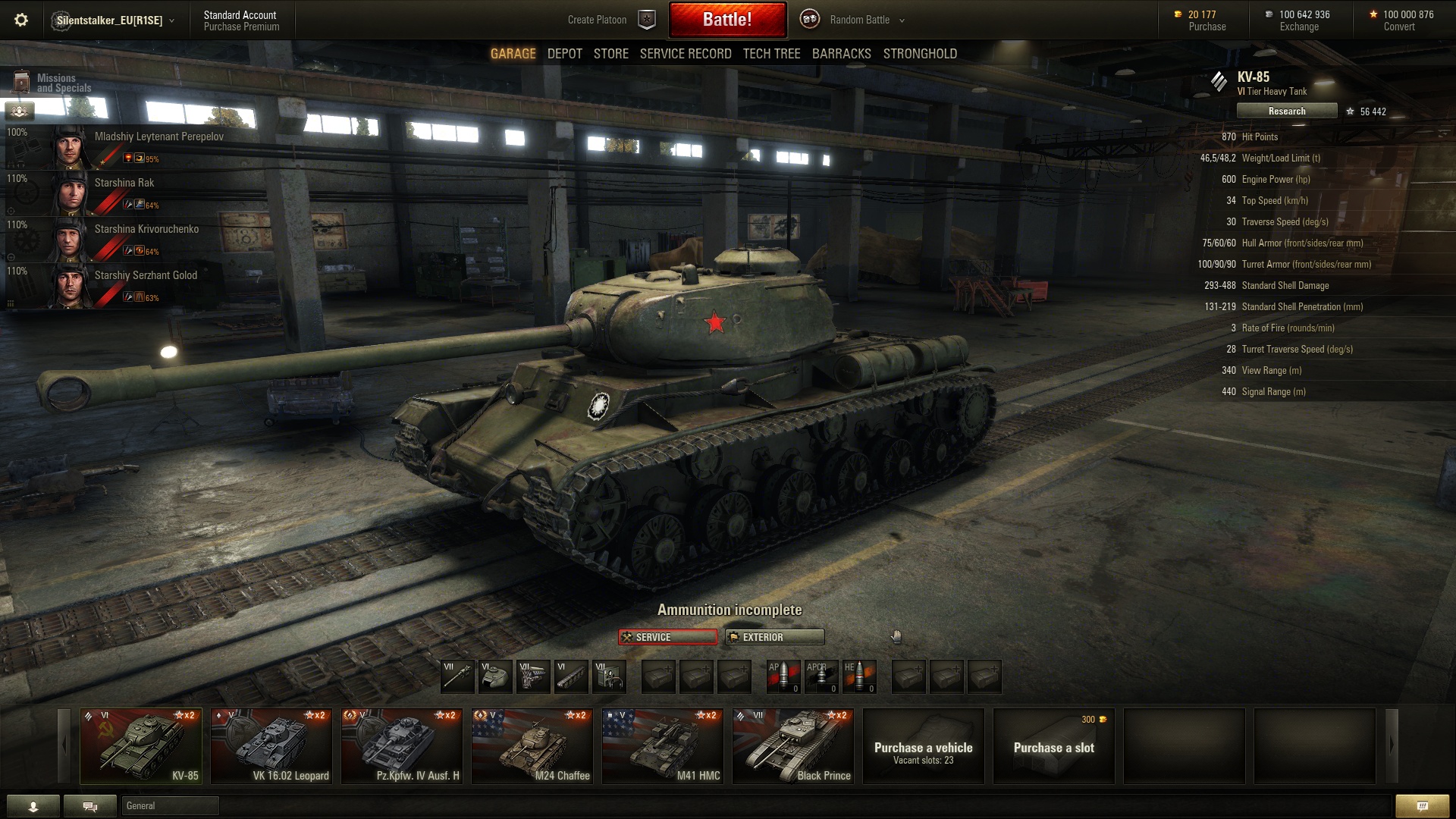 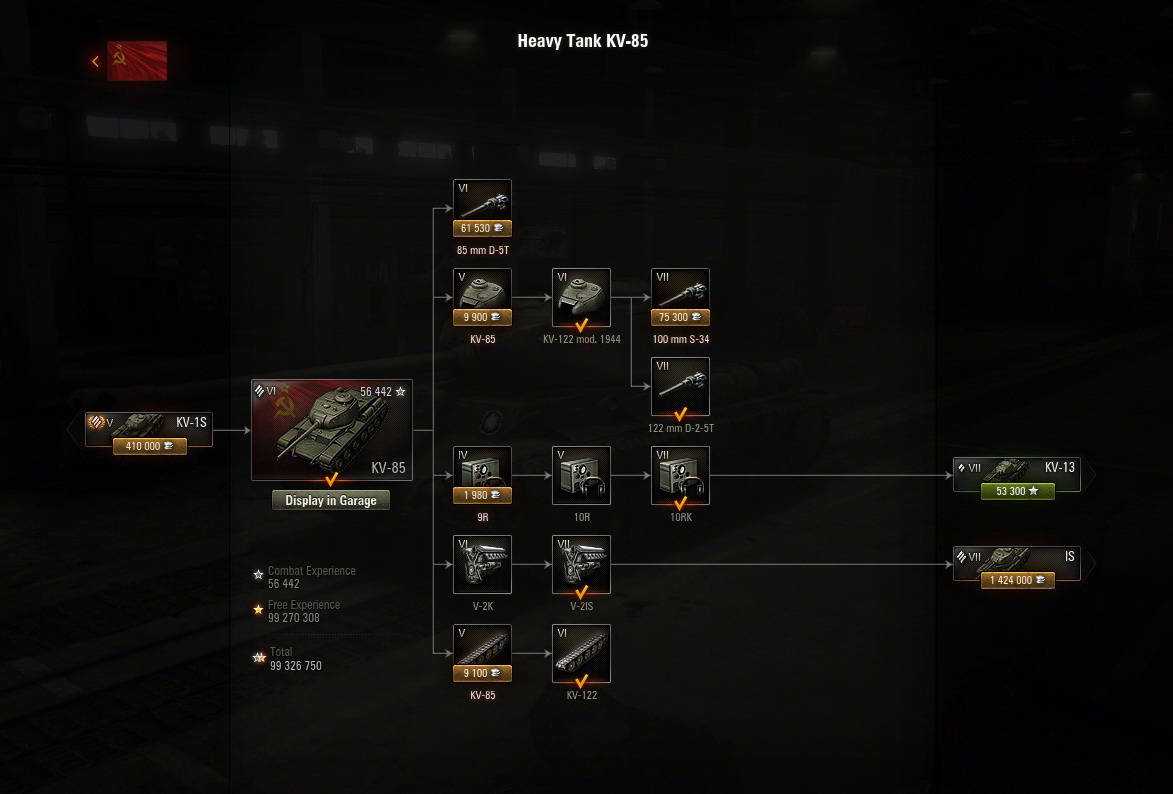 Well, this is what became of the KV-1S. And yes, no matter how anyone presents it, it was nerfed a lot. But it’s not so terrible. Of course, everyone will talk about the gun nerf (and yes, the 122mm gun was nerfed a lot as well), but what I think is most important is something else:

- the speed was reduced: you won’t get into the thick of battle in the first wave anymore. Now, the tank plays like a heavy, not a medium anymore.
- massive depression nerf is perhaps the most problematic one: you’ll have to think very carefully about where you stand and where you aim, no more “lol let’s stand anywhere” for you.

The combination of the two factors above makes the tank much more difficult and tricky to play than it was before – and yes, that is a good thing, given how overpowered the current KV-1S is. Worry not however: you will still be able to deal some serious damage. In this sense, I think the 100mm gun is actually a better choice. It has better DPM, better aimtime and – most importantly – better accuracy. With that (relatively thin) armor, you can’t rely on getting out of battle fast anymore, you’ll have to stay back a bit and for that, the gun is better suited than the brutal but unrefined 122mm.

All in all, it’s still an okay tank. Not the overpowered beast it was, but it’s okay. I think it will do fine.

Comparing the guns of the KV-1S and KV-85 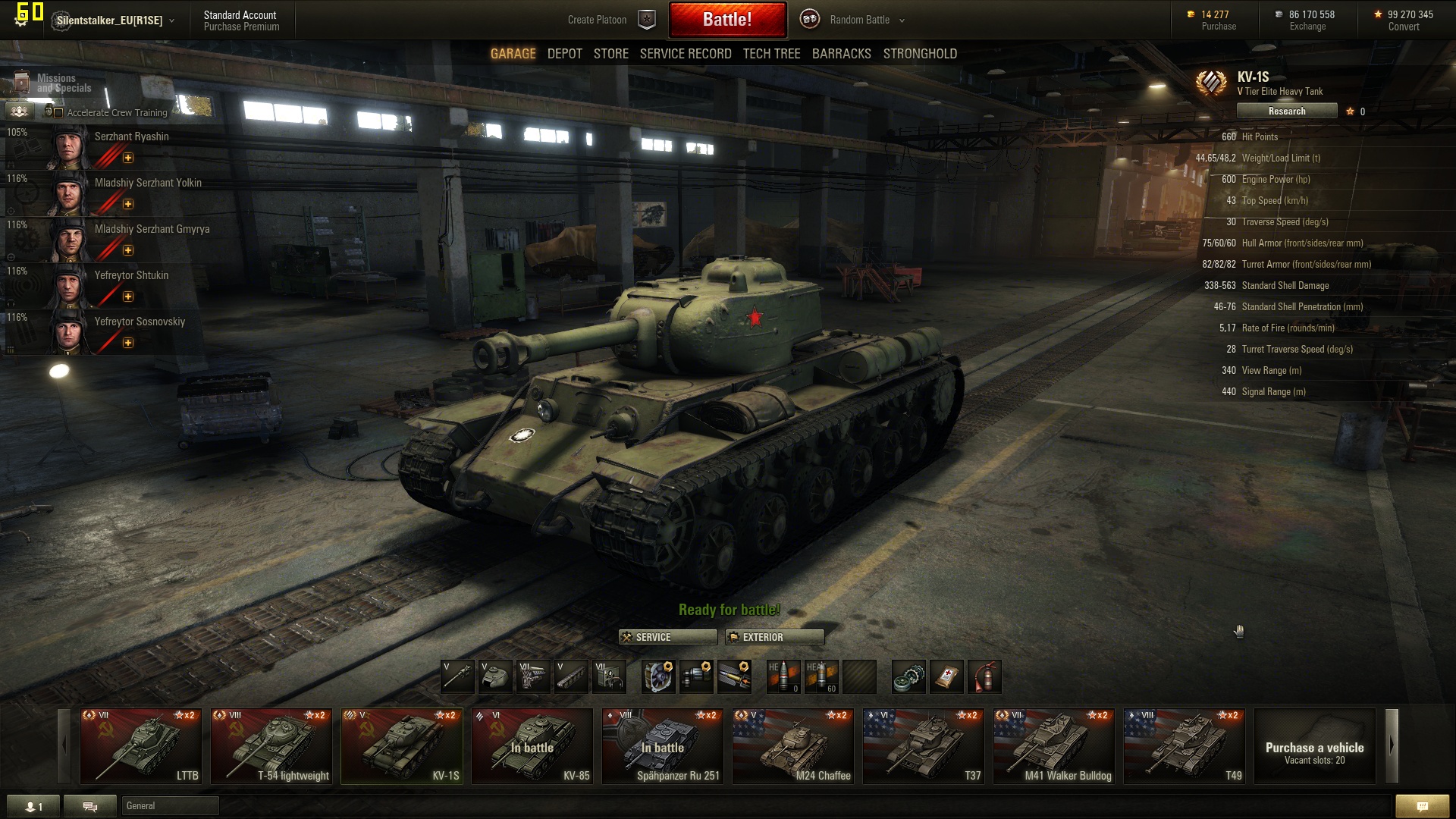 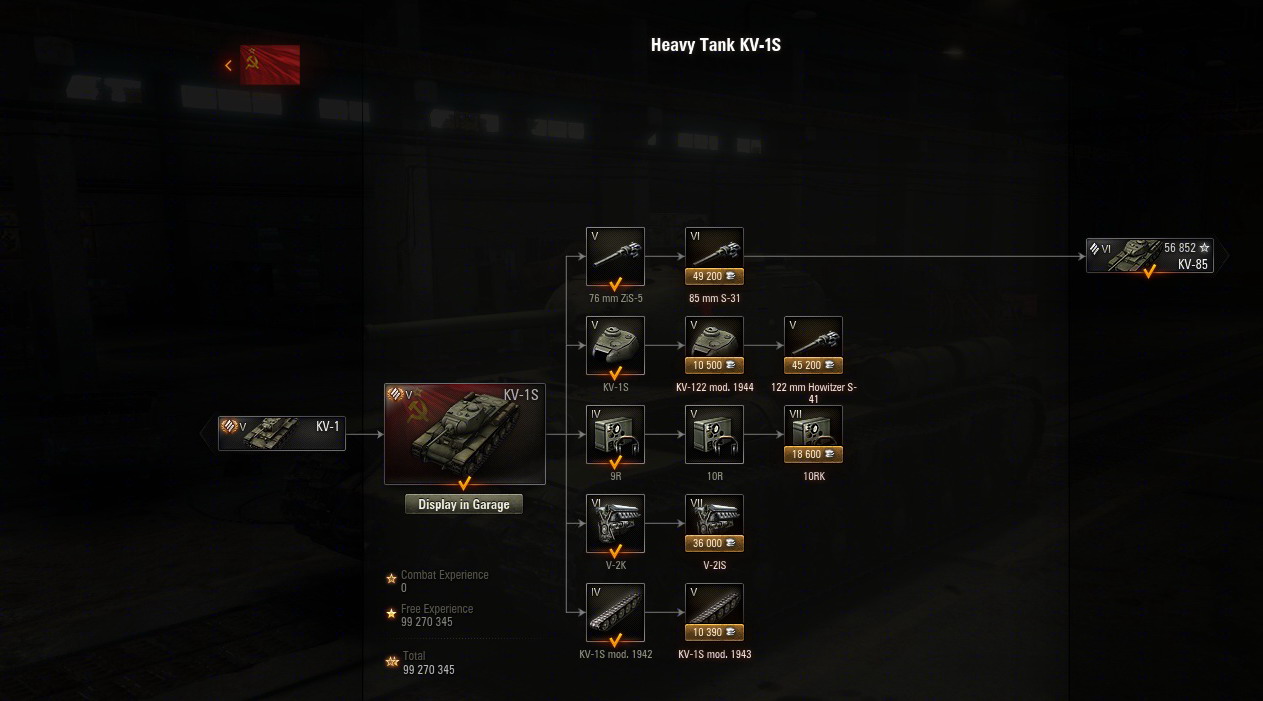 This is the tier 5 tank, that was split from the original tier 6 KV-1S. Many say that it’s actually useless – like the KV-1, but worse, with fewer and worse gun options.

That is a lie.

This tank is actually great. The reason why it is great is that it combines the 122mm derp (which is tiny little bit better than the KV-1 122mm due to its accuracy – compensated however by worse depression) with better speed. What it means is that you will (unlike with a KV-1) be able to even intercept medium prey before the line consolidates into a grinding clusterfuck.

The 122mm is awesome with gold ammo to the point of being overpowered. Remember – this is tier 5, you’ll get to meet tier 3 tanks in this beast. The speed is the key – the tank is actually pretty nimble and accelerates relatively fast, that’s what I really like about it. It has no extra special features, but a combination of decent armor, speed and firepower just works (I hope they won’t make it any slower or sluggish). Check this out: 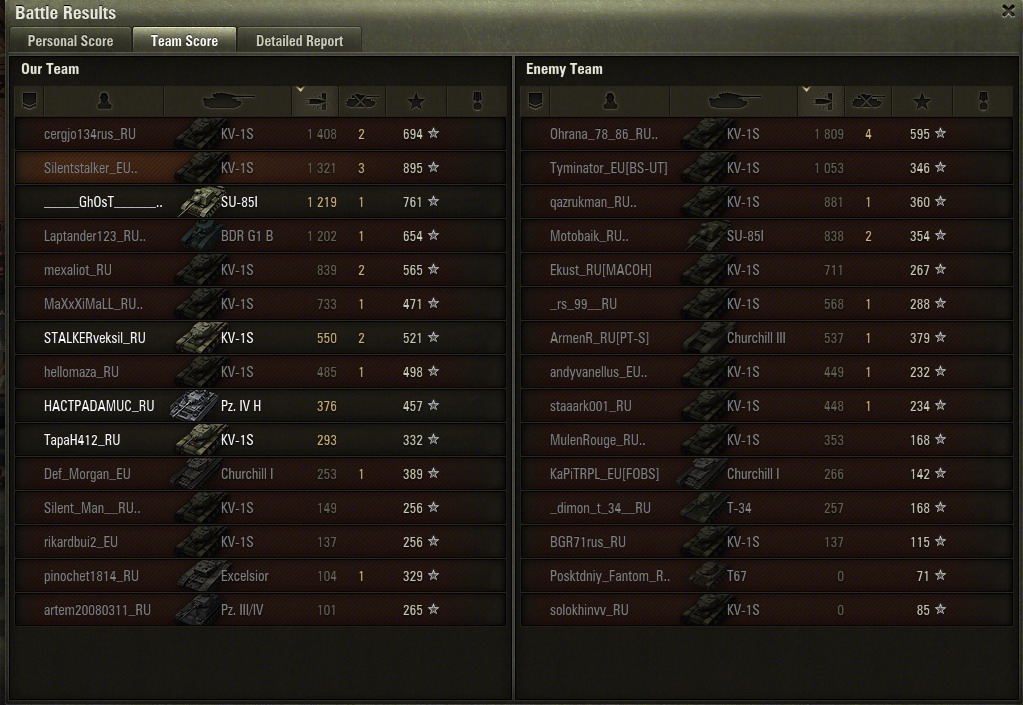 You can do very well in this tank even when the prey is your equal. Imagine it unleashed on tier 5. I really, really like this vehicle and unless it gets a substantial nerf, I think I will be getting exactly this.

Comparison of the characteristics of KV-1 and KV-1S 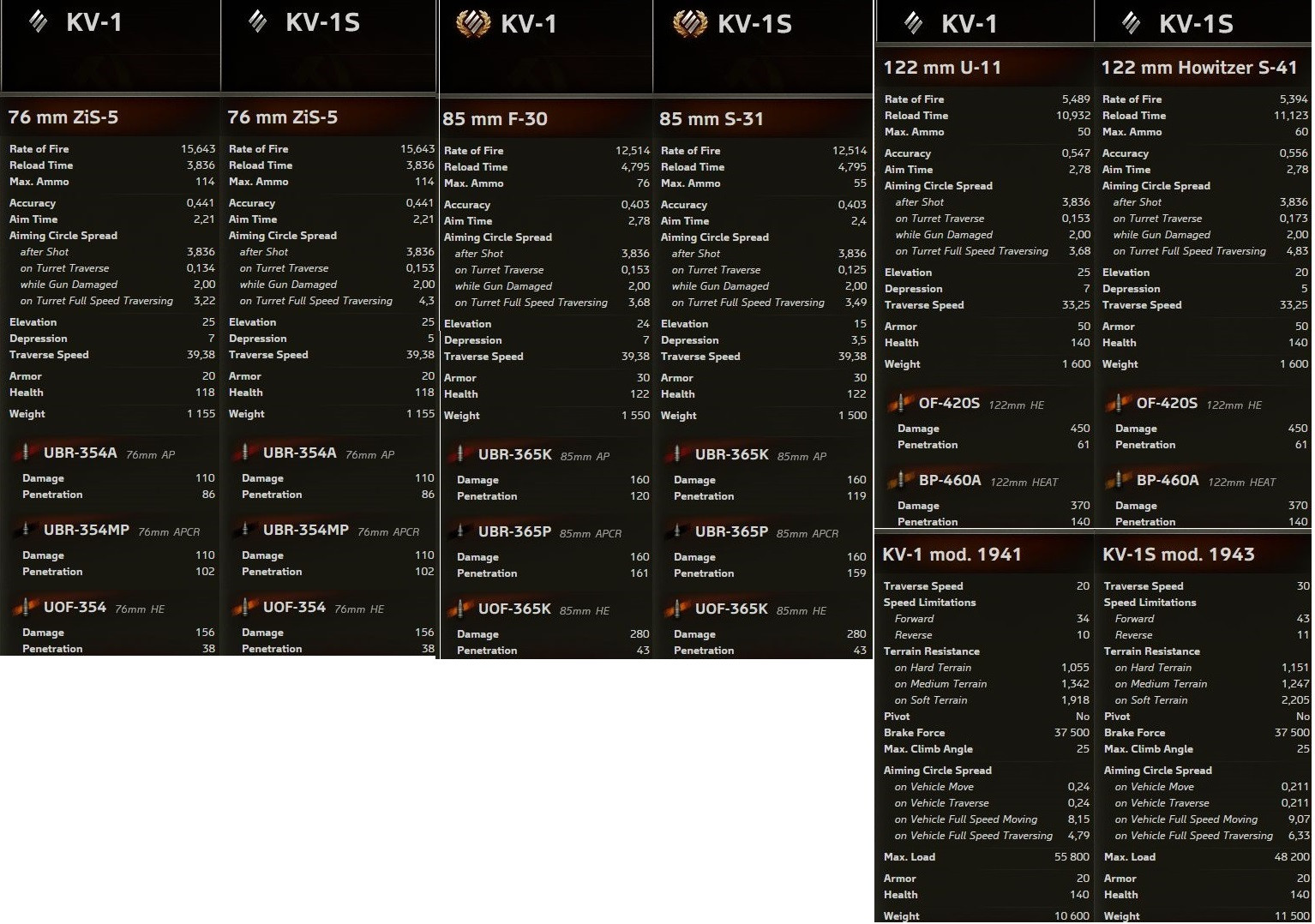