Silentstalker: Hello everyone. Today, we are going to talk about the Spanish Leopard/AMX Hybrid and how it can be a potential tier 10 Spanish branch tank (instead of yet another re-worked M47) – and yes, Spain can actually build a branch. More or less. Enjoy!

Okay so despite sitting on this for some time trying to find out more I have come to a dead end with it. Basically I was chasing up rumours that Spain did some interesting tank development experiments from the late 1970’s to early 1980’s which (if we suspend the arbitrary and rather silly 1970’s cut off for a moment) would fit in game as a tier 10 tank.

Yes that’s right I said it. No I’m not suggesting composite armour etc., but really, the technology should in my opinion be the cut off for inclusion of vehicles rather than a date, which has already got in-game exceptions. Enough of that though for now – back to Spain.

So I should say that I cannot find any concrete source other than internet murmurings of this and a handful of photographs but let’s look at what is ‘known’.

Starting with ~1970 when Spain bought 19 (first 6 delivered in November 1970) AMX-30 tanks from France to replace their ageing fleet of US tanks like the M.41 and M.47. The US and UK had suspended sales of equipment to Spain for political reasons and – as the gun on the Leopard 1 was British – the Germans couldn’t sell the Leopard to Spain at the time. So, Spain had basically had a choice of either the AMX-30 or Leopard 1 and then been forced to take the AMX-30 by the Leopard 1 being unavailable. As of ~1974, Spain actually manufactured the AMX-30 (AMX-30E) under licence still fitted with the 105mm F1 gun and a 680 hp HS-110 Diesel engine.

To say they were renowned for reliability would be a mistake, basically they were terrible, horrible breakdowns and maintenance to such an extent that they not only started to improve the old and ‘replaced’ fleet of M47 and M48 tanks, but with modifications to improve the AMX-30, which in turn led to the Lince tank project.

Now, I am not an engine person but Walter-Sobchak from the NA forums is and he very kindly helped me take a critical look at the engine/transmission choices – his comments are in parenthesis.

So ‘improvement’ modifications attempted to the AMX-30E fleet they had started with a replacement Teledyne AVI-AY-1750-8 690 hp engine which required the hull to be lengthened to fit the longer engine with the wheels spaced further apart.

Walter: “…the AVI-1790-8 is an air-cooled v-12 gasoline engine built by Continental motors. This was the engine that was in most of the US M-48 tanks (M48A2 and M48A2C models to be exact.) To me, this engine would have been a retrograde step in an AMX-30 since by that time Continental already had a diesel air-cooled v-12 of the same size and similar power…. [the AVDS-1790-2 or 2D] … [the] AVI-1790-8 … was a gasoline engine and already being phased out of US service by the time AMX-30 was introduced. There is nothing wrong with the AVI-1790-8, it was a good engine, but being a gasoline engine it had poor fuel economy compared to a diesel.”

By 1979, the Spanish army, having had the AMX-30E production run completed in Spain, contracted with a firm in Santa Barbara to study a solution to their mechanical problems with the following desired outcomes:

On the prototypes developed, the Spanish army had intended to use the Allison CD-850-6A gearbox, but the apparently the French refused (I have no idea how the French could control this but I assume it to be a contractual matter), so, as a result, the French SESM ENC-200 Minerva gearbox was used for several tests instead. 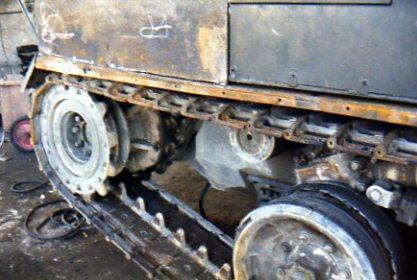 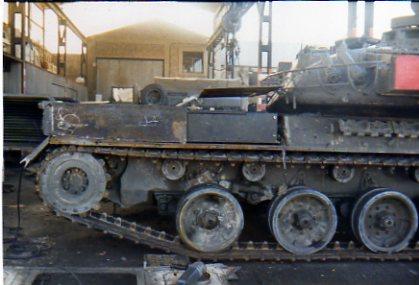 • P-001 known as the ‘NLiO’ made by Chrysler-Spain in Toledo
o Hull lengthened by 300mm
o Hull height increased (not known by exactly how much) at the back by enough that when the turret was turned to the rear the gun could not even depress to zero degrees which is obviously really bad.
o Fitted with a Continental AVDS-1790-2D engine producing 750 hp combined with an automatic Allinson CD-850-6A gearbox
o Using the new hull, engine and gearbox mobility is quoted as ‘excellent’
o Walter: “…Since this was the engine and transmission combo that powered the US M-60 tank, it makes sense that they considered it. The AVDS-1790 is a fairly big engine and the AMX-30 is a very small tank, so I am not surprised at all that they had to expand the hull in order to get it to fit. …The ‘D’ at the end of the designation AVDS-1790-2D indicates that they were using a later ‘RISE’ version of the engine. RISE was a US army “product improvement” program in the 1970′s which introduced some reliability upgrades to the engine.”

• P-003 fitted with a Hispano-Suiza HS-110 engine producing 720hp combined with an Allison CD-850-6A transmission
o Walter: “P-003 has the standard AMX-30 engine but with the Allison CD-850 transmission. This is essentially the same transmission used in the US M-60 tank as well as the Israeli Sho’t Cal (modified Centurion.) This is a very reliable and capable  transmission although it really can’t handle anything above 750HP or a vehicle more than 60 tons or so.… For a tank the weight of an AMX-30, the CD-850 would be perfectly fine.”

• P-004 fitted with a Teledyne-Continental AVDS-1790-2C engine and an Allison CD850-6A transmission
o Walter: “P-004 is almost the same thing as P-001. Same transmission and the engine is almost identical. The only difference between an AVDS-1790-2D and an AVDS-1790-2C is that the ‘D’ version has a 300 amp alternator while the ‘C’ version has an 650 amp alternator. The higher power alternator was added in the mid 70′s when the M60A3 was introduced into US Army service. The improved fire control systems of the M60A3 required more electrical power than the simpler system in the M60A1 (although ‘C’ versions of the engine ended up in M60A1 tanks as well as engines were overhauled. In general, crews liked the more powerful alternator for a variety of reasons.)”

• P-005 fitted the 720hp Hispano-Suiza HS-110 engine but using a RENK RK-304 transmission
o Walter: “This version is the standard engine of the AMX-30 mated with a Renk RK-304 engine. The RK-304 was developed by the German firm Renk specifically for use in foreign tank upgrades. In particular, it was intended for M48, M60 and Centurion upgrades.”

• P-006 ‘N’ – this prototype uses the hull of the AMX-30 mounting the turret of a Leopard 1 (its not clear if the turret rings are the same diameter or were compatible or if some kind of adapter was required. – no photos available of this but I made a conceptualization below.

• P-009 – two prototypes produced:
o First has a new hatch for the loader and a mounting for a Browning machine gun
o Second fitted with a General Motor GM 124-71 OTA water cooled 800 hp engine combined with an Allison model CD-850-6B transmission
o Walter: “[Probably means] the Detroit Diesel 12V-71TA engine… Detroit Diesel is a GM subsidiary. The 71 series was a popular line of diesel engines for trucks and military vehicles. The ‘12V’ in the name refers to the number of cylinders and configuration. These engines were offered as replacement or upgrade engines for a number of tanks such as the M47 and M48. … I am going to guess than the T indicates turbo-charging and that the TA indicates Turbo-charging with after-cooling.”

Conceptualization of P-006 using a Leopard 1 turret and lengthened and raised AMX-30E hull.

So there we are, the sum total so far known it seems about these experiments. I would love to know more so if you know more or have a link please pm me on the NA forums or leave a comment. Overall the experiments appear to have been plausible and to have worked to varying degrees and produced at least one truly unique vehicle; the P-006.

So IF we do ignore the 1970 date (because ‘reasons’), then we genuinely have a very interesting possible vehicle for Tier 10 for the game.