you probably heard about the screwup with the SU-76I. It did put Wargaming into an uncomfortable situation – now that it’s out, they can’t nerf it (it’s a premium tank after all), all the while the vehicle in the game is clearly overpowered. And so, they will have to introduce another lowtier tank destroyer to replace it I guess. And what do you know – there are two perfect candidates for the role, the SU-74 and SU-57b (the third one would be OP I guess). 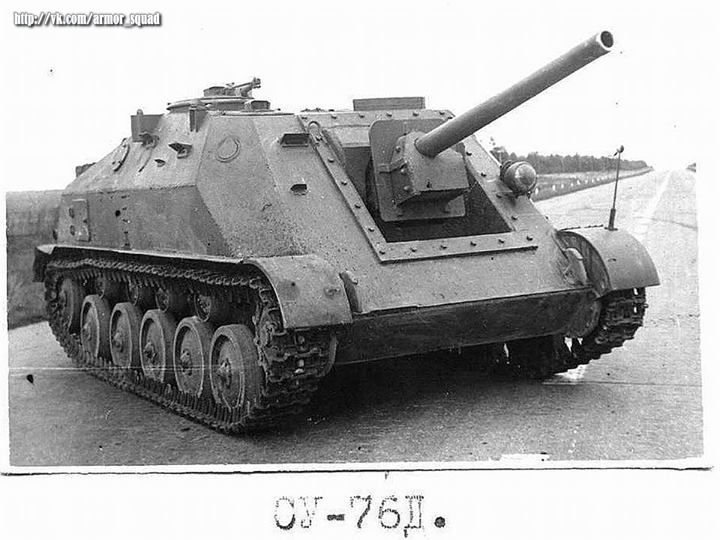 In the summer of 1943, the designers of the GAZ plant under the leadership of N.A.Astrov (famous Soviet vehicle designer, responsible for example for the T-60, T-70, T-80 or SU-76M) created two light tank destroyer projects and offered them to the national commissariat of tank industry under the designation of GAZ-74.

The first vehicle (GAZ-74a) project resembled the already existing SU-76, while the other (GAZ-74b) was more of a “Hetzer” design, with closed compartment and frontal gun. Where the first vehicle was relatively tall (albeit maneuverable), the second one was low and sleek, well armored (frontal armor was 35mm thick, but it was sloped) and it was armed with a 76mm S-1 gun, the same type used on the SU-76I. It was to be powered by a lend-lease diesel engine by General Motors, the 110hp GMC-71, that was to be license-produced in the USSR by the YaMZ plant in Yaroslavl.

Design-wise, the project turned out to be a mashup of T-70 parts and equipment (the vehicle was based on the T-70) and the American engine with some new development added into the mix. Generally, the vehicle resembled the famous German “Hetzer”, although when it comes to its gun and armor, it was inferior to it. The suspension was taken from the T-70 as well, with individual torsion bars for each of the 5 roadwheels and 4 return rollers.

The hull was made of rolled armor plates of varying thickness, from 10mm to 35mm – only the frontal armor had a significant slope in order to make it easier for the crew to operate the vehicle by giving them enough space. The vehicle had a crew of four – driver, commander, gunner and loader. The frontal plate had a massive hole cut in it in order to mount the powerful 76,2mm S-1 gun. The gun itself had a -5/+14 depression/elevation and could traverse 13,5 degrees to each side. The gun mount resembled the SU-76I gun mount for the same gun. The vehicle, as stated above, was powered by the GMC-71 engine, locally produced under the designation of YAZ-206.

The vehicle was built in one prototype, that was designated SU-74 or SU-76-I. It passed succesfully both factory and army trials. However, it was already second half of 1943 and the Soviets were meeting heavily armored German tanks, such as the Panther and the Tiger – the gun was considered too weak to knock out the German behemoths at that point and it was this that caused this vehicle not to be mass-produced. The entire IT (tank destroyer) series of light “Hetzer-like” series, that started much earlier, was in fact a Soviet (at first desperate) attempt to bring more AT guns to the field to compensate for the lack of AT measures and tanks, but in 1943, the danger of being overrun by German Blitzkrieg was no longer present.

Despite this setback, GAZ continued its work on the light tank destroyer series (despite the apparent obsolescence of the concept, that – ironically – started to appeal to Germans in turn, as they met more and more Soviet armored vehicles). In Summer 1943, the production of 57mm ZIS-2 guns was resumed in the Gorky Artillery Plant No.92. These guns had pretty good ballistic characteristics and GAZ decided it wouldn’t be such a bad idea to actually use a high-power 57mm gun in the GAZ-74 chassis to produce a better-performing tank destroyer. They introduced more variants of the project – one was to be equipped with the 57mm gun (S-1-57, ZIS-4) and the other with some sort of improved 76mm (S-54 presumably). The 57mm variant recieved the designation of SU-57b. 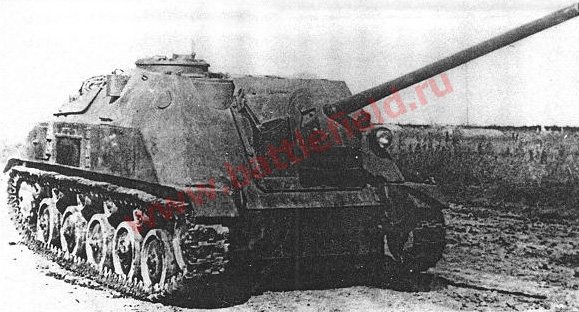 A prototype was built as well and it passed all the required tests, but, just like the project before, it was not accepted in service. The reasons for the cancellation of the project was – apart from what was stated above – that the vehicle was actually expensive to produce.

The development of the GAZ-74 chassis ended in 1944 with the introduction of the improved version, carrying a 76mm gun (S-1), but with improved armor (60mm in the front). This vehicle was designated SU-76D (or GAZ-76D). A prototype was built and was tested by the army under the designation of SU-80. However, at this point, the SU-76M was already produced in massive numbers and it was preferred by the army to keep the mass-produced vehicle instead of introducing a completely new one. 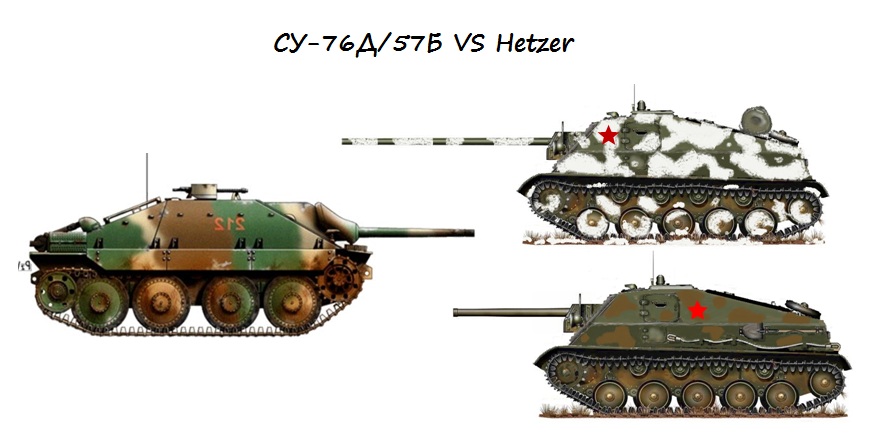 The SU-76D emerged one more time in early 1945 – in Hungary, the vehicle was tested against a captured Hetzer along with the SU-57b with mixed success (one of the listed SU-57b drawbacks was the lack of powerful HE shells for example).