In recent Q&A, Storm stated that while they are looking for some tier 10 vehicles to serve as reward tanks to be obtainable thru random battles, but haven’t found any. Well, here’s one they could use. Presenting: the Weserhütte Tiger!

What is it? Well, basically, to quote Kankou: Basically, a rear transmission E-75 with originally projected speed (40 km/h) and armed with an upgraded 10,5 cm KwK 46 L/68 (preferably without the muzzle brake).

Yes, it is (somewhat) historical – by somewhat however I mean more than GW E-100, or GW Tiger P, which are for example completely made up. This is its main advantage. Both Kankou and Zarax have been writing on the topic of Weserhütte Tiger for some time, for example here and here. Zarax tends to focus more on the truly historical side, while Kankou made a post specifically with the intent of having this vehicle introduced into the game. I will therefore quote her on this:

For those following Silentstalker or Zarax might have seen the following picture: Long story short, Eisenwerk (steel mill) Weserhütte of Bad Oeyenhausen was a participant in the E-Series Project, and apparently was tinkering with a design for what we call the E-75. Those with sharp eyes will notice the 153.5 mm difference between the distance of the leading and end wheel for the Adler and Weserhütte design, and also a 25 mm difference between the distance of the first and last roadwheel (never mind the E-50 style suspension of Weserhütte, which is very interesting, to say the least). Zarax had written a bit on this topic (linked above), and I have studied the issue, focusing on measurements on various tanks. In this re​sc​ri​pt, we shall be looking into conflicts between requirements, concepts, blueprints, and reality, as the purpose of the mysterious Tiger (Weserhütte) is pondered upon. The result is interesting, to say the least.

Shall we begin, Kameraden?

The E-series designs were to be simpler, cheaper to produce, and more efficient than their predecessor tanks, yet their design involved only modest improvements in armor and firepower over the designs they were intended to replace. In addition, they were to utilize common interchangeable parts, thereby reducing the load that came from the extremely complex tank designs that had resulted in poor production rates and mechanical unreliability. The five requirements given by Wa Prüf 6 were the following:

1) To achieve a very strong frontal plate, move all possible weight to the rear
2) Unify the drive train unit to simplify maintenance and service
3) Standardize all panzers into four weight classes
4) Attach all suspensions from the outside and no fighting space encumbered by through torsion bars
5) In case the front idler or any road wheels were destroyed by mines, the vehicle must be capable of proceeding by adjusting the track around the remaining wheels.

Ultimately, the E-series would represent the final standardization of German armored vehicle design.

The program used the design offices of engineering companies which had no previous experience of tanks, under the belief that this will help bring about the most original approach to the problems at hand. These companies included Klockner-Humbolt- Deutz of Ulm, makers of the Diesel powered RSO/03, Argus of Karlsruhe, Adler of Frankfurt, and Weserhuette of Bad Oeyenhausen, all mainly component manufacturers, making things like engines, gearboxes and brakes for the larger concerns such as MAN and Daimler-Benz. It is worth knowing that not only could the ideas that formed from this project be considered the peak of German technological thought, but also that many of the components and ideas from E-50 were inherited by French tanks and also incorporated into the Indien-Panzer, eventually leading to what we know as the Leopard 1.

Of particular interest concerns the placement of the transmission. At least at the “experimental” level designers were considering rear mounted final drives as part of power pack concept to simplify maintenance. This is based on the preferably having the gearbox and final drive at the rear of the hull (as mentioned in the second requirements given by Wa Prüf 6). The technical superiority of forward drive was recognized (tests by the Germans had shown that tractive effort was far greater with front drive), but the military advantage of having the drive at the rear where it was not endangered by anti-tank fire, and the greater internal space in the fighting compartment which would result from the placement, influenced the choice of rear drive.

However, these first thoughts and proposals on future panzer requirements were never given any priority and as the war situation deteriorated. The “real“ engine/transmission package designers from Maybach never actively got involved and the armor designers certainly had not considered how a rear drive might be mounted. Wartime reality dictated that the front drive was seen as being a good enough of a solution. This would indicate that if the E-50 or E-75 had been produced, it would have had a front drive until conditions allowed the redesigning to a rear drive. Still, this does not mean that a rear transmission itself was completely ignored. E-50 and E-75 were to mount a transmission which would eventually be developed as the ZF M-4 transmission for the AMX 50. Essentially, at least conceptually it was entirely possible for a rear transmission to have been developed.

Keeping this in mind, allow us to explore the royal tank that was the basis of E-50 and E-75: Tiger II.

One of the most iconic heavy tanks of World War II, Tiger II is majestic in its appearance.However, there are quite a few differences in the measurements of the hull. Some sources say 7.38 meters, another mentions 7.1 meters, and a blueprint of the Krupp plan to install the 10.5 cm gun indicates 6.8 meters. In order to analyze this, the following drawing by Mr. Doyle should serve a purpose: According to this, the length of Tiger II from the nose to the rear armor is 6.8 meters. Once measurements include the exhausts or the front fenders do the number extend 7 meters. It seems that ultimately all the different measurements are based on where the hull is measured from, with the most related measurement concerning internal space to be 6.8 meters. In addition, the distance between the leading and end wheel is approximately 5.5 meters. Unfortunately, the design of Tiger II did not survive into future, contrary to what quite a few people seem to think. Only the French, utilizing the Panthers and hiring German engineers, continued on the heavy tank technological advances of the Third Reich, and even this was only for a short while. The ultimate result (and dead end) was AMX 50.

Of particular note for this tank is that the engine and transmission were both essentially the continuation of the E-series. The engine was the Maybach HL 295 (a redesigned German gas engine in 1945 captured at Friedrichshafen by Engineer-General Joseph Molinié), which would have been used for both E-50 and E-75. Furthermore, the transmission was developed from the same designs which was to be used for E-50 and E-75. Basically, we can see what the rear transmission E-50/E-75 would have needed for it to be able to contain such an arrangement. Using the length of the hull (7.24 meters) and of the engine room floor (2.2 meters), we can attempt to see what changes are required

For all purposes, both E-50 and E-75 had the same hull dimensions as Tiger II, with only the angles of the frontal armor being different (and the obvious armor thickness changes). Once you attempt to put the rear transmission into Tiger II, this happens: The additional 0.8 meter of spaced required means that the turret itself would have to be moved forward, which in itself would collide with the forward hatch and ventilator cover, causing quite a few problems for the crew. In order for a rear transmission to have been possible, the hull itself would have to be lengthened by a minimum of 15 cm, and the turret itself moved from the formerly central position to just ahead of the engine room, which would be around 0.5 meters forward from the original location. As it happens, such a vehicle exists in WoT: E-50 Ausf. M.

From left to right, top to bottom:
“Technically, you can lower it a little. No torsion bars, no driveshaft, you can lower the engine and cut off some hull.”
“Motor group from the AMX 45″
“This wheel is no longer the drive wheel, remove clutches.”
“Move the fan grilles to cover the engine, the transmission service hatch is behind them.”
“This wheel is the leading wheel, add clutches”
“Turret moved as far up as possible so you can still open the hatches.”

The above are the notes that WG had made when developing E-50 Ausf. M, and we can see the requirements necessary for a rear transmission

E-50 Ausf. M happens to be approximately 15 cm longer than both E-50 and E-75, with the distance of the leading and end wheel being 5.6 meters and the distance of the first and last roadwheel 4.1 meters. These numbers are that used for Tiger (Weserhütte). Basically, by coincidence or design, the rear transmission E-50 Ausf. M lays out what Tiger (Weserhütte) would have been potential of if the German designers had managed to move on to a concrete rear transmission design. And as it turns out, SerB had confirmed E-50 Ausf. M is basically a redesigned Tiger (Weserhütte). Silentstalker: By the way, ever wondered, why E50 Ausf.M is called “Ausf.M”? Check the picture author’s last name.

For some reason, Weserhütte had made a concept design for E-75 which was different from the Adler design, in being both longer and with having a different running gear layout of six roadwheels. This design had the potential of being the basis of a rear transmission E-75, given the specific redesigning necessities being fulfulled as seen in the example of E-50 Ausf. M. Basically, we can argue that there was a historical basis for the rear transmission E-75, something which has a firmer foundation than the requirement-reliant E-50 Ausf. M. Of course, there would be the problem of redesigning the turret and such, but the conditions do exist for a tier 10 potential juggernaut which could replace the VK 72.01 (K) and with a greater historical basis.

It is certainly interesting how even in the chaos of the final months of war, the Germans were working on different ideas which could be used. Perhaps we might see something interesting in the future, or perhaps not. Nevertheless, what is certain that ultimately almost everything we see in World of Tanks has some foundations in history, and we should use this as a basis to further our own knowledge.

Well, that’s for the history lesson. And how would it look in World of Tanks? 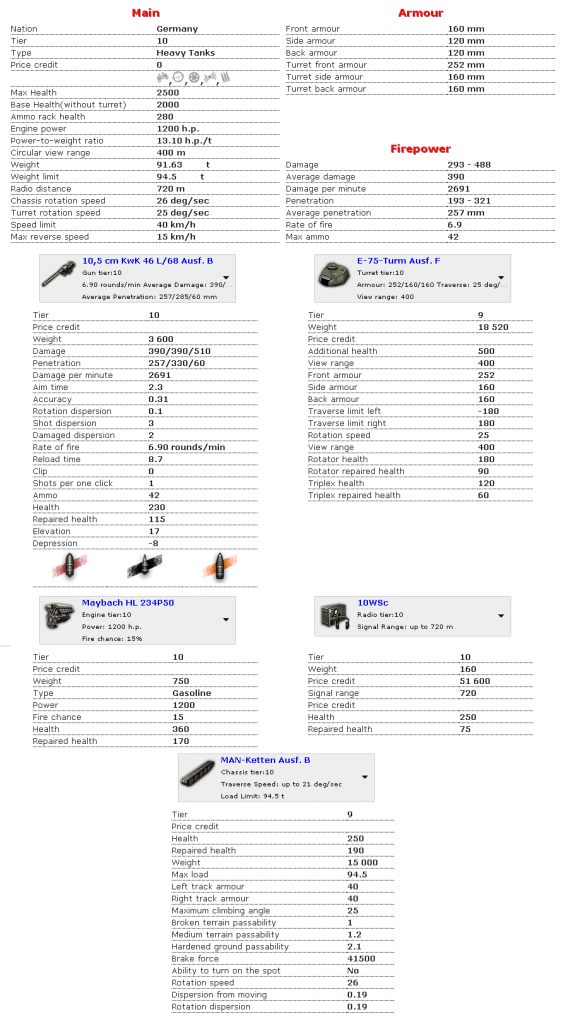