basically, yesterday evening I was scouring books for some information about the leaked LTP light tank. While I didn’t find anything exact, Ensign_Expendable (you know, the awesome guy who writes about Soviet tanks on FTR and on his blog) has some theories, we’ll get back to it later.

In the meanwhile, I found something interesting as well. In the beginning, there was this picture: At first I was like “Okay, there is something weird about that Vickers/T-26″. After a few seconds, it did hit me – it’s the suspension. The original T-26 looks like this: 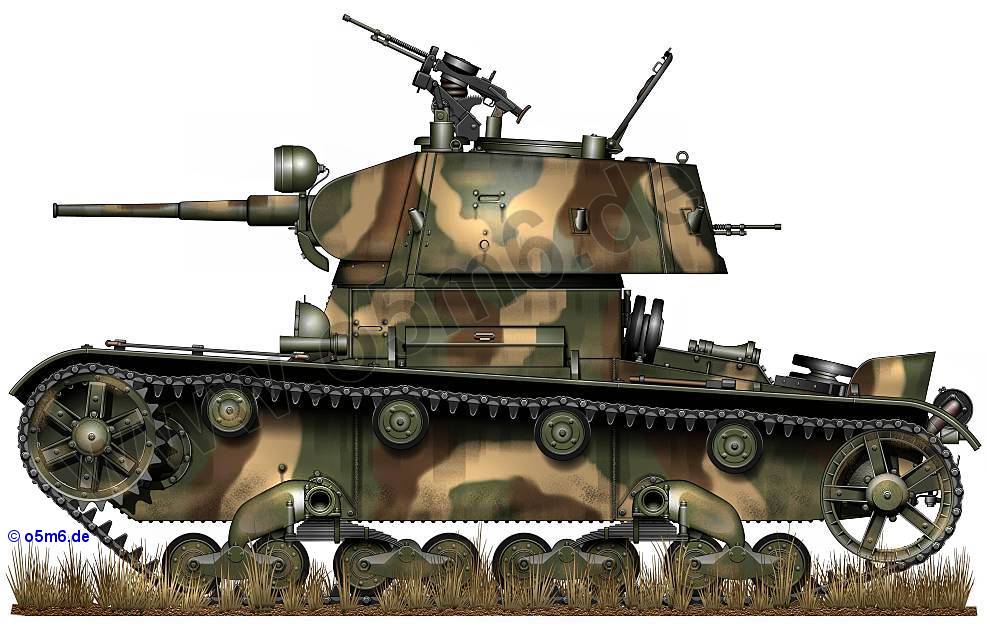 As you can see, it’s a bit different. So, what IS the first suspension (since the second picture shows the “original” suspension)? Well, the answer was somewhat surprising.

In 1938, the Soviet army asked the Czech Škoda company (by that time well-known for its LT-35 tank, internal company designation Š-IIa, the players of WoT know it under the name of Panzer 35t) was asked by the Soviet army to demonstrate their Š-IIa tanks to a committee of soliders and engineers. Škoda, eager to export the (somewhat aging, yet still viable) design, complied.

The trials of two Š-IIa vehicles (a serial LT-35 and a prototype) were conducted (under the Czechoslovak army representative’s oversight) on Kubinka proving grounds from 14.9.1938 onward. The results were good: the vehicle was relatively fast (36km/h on the road, 32,4 km/h off road) and it did well when its ability to break walls, trees and passing various obstacles was tested. Its fuel consumption was also relatively moderate – during the trials (lasting cca 3 weeks), one vehicle drove cca 1500km in total, while consuming 1947 liters of gasoline (130 liters per 100 km on average, while Soviet Union’s T-26 tank “drank” 130-190 liters per 100 km (depending on surface)). The Czechoslovak army officials even permitted the Soviets to shoot one of the light tanks from a heavy machinegun – only minor damage is caused. It was also found out that when shooting directly at vision ports, the protection of the crew was sufficient.

But the best part was: unlike with Soviet tanks, medical examination of the crew proved that even after 8 hours of driving this tank, the crew fatigue was very, very low – the tank was easy to drive, easy to handle and comfortable (a trait even the Germans and their allies praised when Czechoslovakia was occupied).

Here’s how the LT-35 suspension looks like, for comparison: The Soviets examined the tank very closely – for example, they demanded to measure EVERYTHING, down to milimeters. They also demanded the engineers to “demonstrate” the tank maintenance by removing and dismantling the engine and transmission components. At that point, the Czech army staff got really suspicious that the Soviets are not trying to evaluate the vehicle for purchase – they are in fact trying to basically copy some of its components. After that, the trials quickly deteriorated, the Czech staff forced the Soviet engineers to destroy any such “notes” with exact measures/numbers and the delegation went home, along with the prototypes.

Further tests were agreed upon (including comparative tests between Soviet and Czech vehicles), but after the Munich treason, nothing came of it.

But that was not the end for the Soviets. They liked the Škoda suspension. They liked it in fact so much that they decided to copy it, no matter what. Many Soviet engineers and tank designers studied the test results, including some drawings that were left (some were even present during the tests themselves before) – the result was, that the design bureau of the Leningrad Kirov Plant No.185 (in cooperation with Plant 174) designed several Soviet tank modifications and designs, based on the T-26 tanks.

Here’s a timeline of the vehicle development, based on Jiří Tintěra’s work from the valka.cz server (will be quoted in sources): As can be seen from the table above, the T-26M was based on T-26-1, which is better known as “T-26 mod. 1939″. The first picture of this article (that caught my attention), represents exactly this vehicle. When you compare the LT-35 and T-26M suspensions, you can see clear similiarities.

T-26M was built as a prototype in the Leningrad plant No.185 (as mentioned before) in 1939, under the guidance of Semyon Ginzburg (who was later stripped of his chief designer position for the failures of the initial SU-76 design and sent to the front, where he died in 1943). Apparently, 2 prototypes were made, but it was never accepted in service. Unlike the T-26 mod.1939, it was propelled by a 97hp Vickers engine, it was less armored (15mm frontal armor), but it was a bit faster (30km/h, compared to 28km/h of the original). The 45mm armament recieved was the same. The T-26-5 (project name “Project 126″) was further developed on the T-26M in 1939 in the Plant No.1985 by the same team, led by S.Ginzburg. It was never accepted in service and an unknown number of prototypes (at least one however) was made. T-126-1 (“Project 126-1″ designation) is the ultimate evolution of the “Škoda” T-26 series, made by the same team to design the previous vehicles, this time in cooperation with the Voroshilov Plant No.174 in Leningrad. It was made probably in 3 prototypes between 1939-1940. It was basically a redesignated T-26-5, with some partial modifications. This time, only the diesel engine was selected for trials (Type 744, producing 130-180hp). The armor was increased once again, reaching up to 40-45mm (this is including the “screen” armor one of the prototypes had added, the “regular armor was 30-40mm thick). This of course increased the weight of the vehicle, reaching up to 14 tons.

This project also never entered service. By the time these were built, the war was looming ahead and it can be speculated that (as was the case of other Soviet designs, the T-34M in particular) existing mass produced types were preferred in order to simplify and increase the production as much as possible.

There was one more project with the Škoda suspension, this time by the Voroshilov plant No.174. It was designed by the chief plant designer, F.A.Mostovoy in 1939 to 1940. No prototype was ever built however.

It was supposed to be a 13 ton tank, powered by the aforementioned Type 744 diesel (tuned to 180hp), it was supposed to be lower, but wider and longer vehicle with 40mm frontal armor, armed with the same 45mm gun as the other tanks. The tracks were also wider (400mm, compared to the 350mm of all the other T-26 “Škoda” models), giving it better mobility.

Unfortunately, I haven’t been able to find and drawing thereof.