Just a reminder, guys, the 8.7 test apparently starts tomorrow. On one hand I am surprised that almost nothing has been leaked about it, on the other hand, the source of this info is very reliable.

- links from and to the British arty branch? “Wait for open test”
- IF the E-50 tanks are unified (definitely not sure), E50M will simply become a hull option for the E50
- a “Wittman-like” medal (for a big number of kills) won’t be implemented specially for lower tiers, because the developers don’t want to encourage experienced players to go hunt newbies, tier 5 (Walters-Radley medal) is already not sealclubbing/pedobearing
- the rule that “weak gun = limited MM” applies only for premium tanks
- if Sturmpanzer Bär was introduced into the game (SS: SerB emphasized the “IF“), it would most likely be a part of Sturmtiger’s branch

SS: Sturmpanzer Bär was a superheavy (120t) 1943 self-propelled mortar project,armed with a 305mm mortar. The project was basically rendered obsolete by the Sturmtiger project and cancelled. This is how it would have looked: 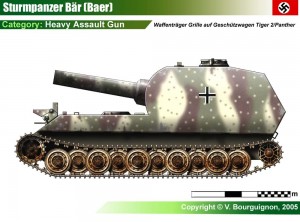 - with the introduction of researchable hulls, GW Tiger P won’t become an optional hull for GW Tiger, because otherwise there would be a hole in the respective tier
- lowtier tanks, previously leaked from supertest (such as AMR P103, LTP etc.) won’t be introduced at once, but at different times for each
- new British and Chinese tanks? “will tell when the time is right”
- SerB doesn’t know yet what the Japanese tanks’ base color will be
- JagdChieftain (CTR) in WoT? “No comment” 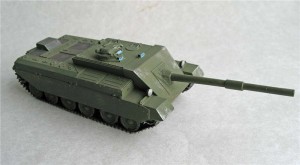 - SerB won’t disclose the exact mechanism, how XP points are gained from combat, he only states that the XP gain is judged by active participation in the line-of-sight tank battle (as in, tanks have to see each other)
- no plans to give additional XP/credits for protecting allied tanks with your tank’s hull
- it’s too early to tell, what impact the 8.6 had on medium tanks
- SerB states that while the statistics are yet to show, arties are unlikely to be directly buffed. Instead, devs have ideas about some new artillery gameplay elements, which would raise the arty effectivity, but the concept is not finalized yet.
- SerB states that while he doesn’t remember whether the IS-6 in the game has electrical or mechanical transmission, you can check it yourself, if the vehicle can turn on the spot, it’s electrical, if not, mechanical
- the German 50mm L/60 gun module is too light in the game, it should be heavier, but this has low priority
- terrain passability is counted according to the point, located in center of the hull (SS: if the center is located on the road, while one track is located on rough terrain, the game will use the passability of the road)
- Russian players started massive whining about the T-44 being underpowered after 0.8.6, it was dismissed as… well, whining.
- StuG IV in WoT? “No comment”
- SerB believes he does have the T92 light tank documents/drawings, because The_Chieftain (US forums history expert/developer) sent him a lot of stuff
- SerB considers the “miniquest” (combat task) principle okay, but its implementation was a bit off.