In the late 1920s, the USSR discovered that they were kind of screwed as far as tank building went. The MS-1 tank was no longer capable of meeting the requirements of modern war, not to mention the aged tanks captured during the Russian Civil War from the interventionist forces.

The way taken out of the situation was very reasonable: hire foreign specialists, have them build tanks at Soviet factories, let Soviet engineers and workers gather valuable experience. Unfortunately, the foreign specialists gathered for the task were not so reasonable. One of these specialists was Edward Grotte. Grotte worked for the USSR for less than two years (March of 1930 – fall of 1931). However, he managed to produce a number of interesting ideas in the meantime.

In March of 1931, Grotte proposed two variants of a monstrous tank. 1000 tons, with either 3 or 6 turrets, armed with 304 mm, 152 mm, 76 mm, and 45 mm cannons (two of each!). 40 people serviced this mobile fortress. Front armour was 300 mm thick, the sides were 250 mm. The tank would be propelled to 60 kph by an assembly of engines totaling 24 000 hp. The tank would have electric controls and a hydromechanical transmission. If you thought that the T95′s double tracks were impressive, think again. Grotte’s creation had three sets.

Grotte’s main creation was much more reasonable: Tank Grotte, a medium breakthrough tank, was only 25 tons in mass, was armed with a 76.2 mm Grotte-Sechyantov gun and a 37 mm gun in a turret above it, kind of like the M3 Lee. Also much like the Lee, the main gun could not rotate all the way around. It was limited to aiming 10 degrees each way, with -8 degrees of gun depression. The 37 mm PS-1 gun in the turret could depress to an impressive -12 degrees. The tank also had five machine guns. The much more realistic 250 hp engine provided a maximum speed of 35 kph. An interesting feature of the tank was emergency brakes, meant to stop the tank as quickly as possible in the event of a damaged track. One of these tanks was built and tested, but proved too complicated and unreliable to mass produce. 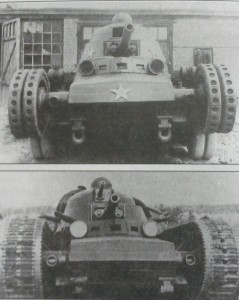 Grotte’s last contribution to the world of armoured warfare was the 1000 ton Ratte tank, cancelled by Speer in 1943.