today, we’re going to have a look at the Object 430U. When the upcoming tier 10 medium tank Object 430 was announced, a lot of players (well, Russian mostly) were asking: “Will it get the 122mm gun?” The answer is of course “no” – it was Object 430U that was equipped with one. 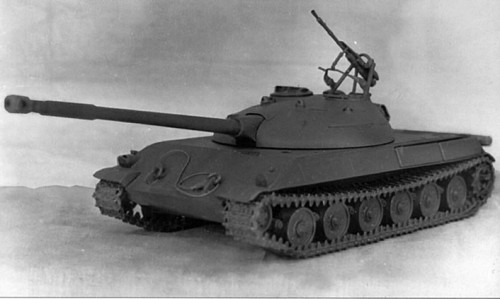 Object 430U (“uluchennij” – improved, or “usilenij” – strenghtened) was – although designated a medium tank – a Soviet take on how heavy and heavily armored a Soviet medium tank can get. It was (as the name suggest) a development of the Object 430 itself, but with improved armor and a 122mm D-25T gun.

The Object 430 itself was a result of the early 50′s program to find something better than the T-54. It was designed by A.A.Morozov in Kharkov between 1954-1955. More details on its history are in the Object 430 article, linked above.

In 1954, the construction bureau of the Kharkov plant No.75 made another medium tank preliminary project on its own initiative, under the designation of Object 430U. The frontal hull armor was improved to 160mm (120mm on original Object 430). The turret was also reworked in order to improve its protection and to install the 122mm D-25T gun (some sources suggest that a 130mm gun was also considered). Suspension was also reworked and the weight of the tank increased from 35,5 tons to 42 tons.

In a number of parameters (ammunition rack, ground pressure, power-to-weight ratio), the Object 430U was better than serially produced IS-3 and IS-4 heavy tanks and also the heavy experimental Object 730. As a result of the Object 430U, it was demonstrated that not only do the medium tanks have development potential, they can also archieve and surpass the parameters of heavy tanks. However, at this stage, the development of the Object 430U was stopped: by its parameters, it was effectively a heavy tank and the Soviets already had a post-war heavy tank program (which resulted in T-10) and didn’t need another one.

SerB confirmed that while Object 430U won’t appear for now, it might be introduced as a tier 10 heavy tank. How would its branch look – no idea, haven’t checked yet, but it would be an interesting addition (lighter than most other heavies, while packing a punch). If you are however concerned about the D-25T on tier 10: don’t be. All the D-25T guns were supposed to be replaced by the M-62, so this tank could probably carry one as well.