today, we are going to look at one pretty interesting story, that has possibly set one of the world records. And the hero of the story? ČKD AH-IV tankette. 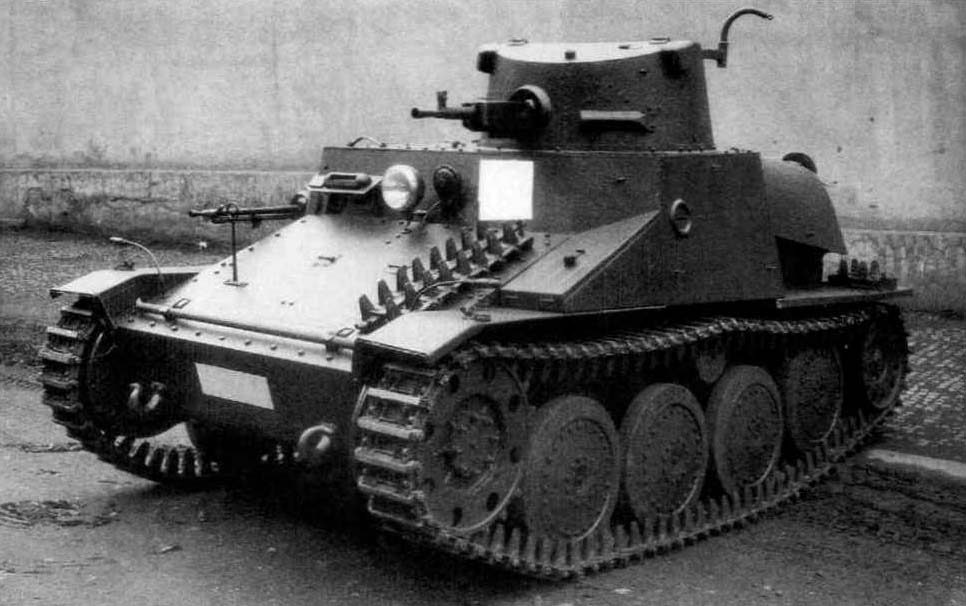 The background of the AH-IV is relatively well known. It was born in mid 30′s and it was the pinnacle of Czech tankette evolution. After the disastrous experience with the infamous Tančík Vz.33 (P-I), that was almost universally hated, ČKD decided it was time for some improvements and designed something on the border between a tankette and a light tank.

The AH-IV was an export vehicle. There were three major versions: AH-IV-P (P as Persia, for Iran), AH-IV-Sv (Sv as Sverige, Sweden) and the AH-IV-Hb. The Romanian version actually fought in WW2 under the designation R-1, with mixed results (it was used as a light tank and for that purpose, it was simply too fragile). Romanians attempted to produce it locally, but this plan failed.

Sweden on the other hand needed a tankette and during 1937 trials, Swedish representatives were satisfied with AH-IV’s performance in Czechoslovakia. The vehicle was modified with Swedish engine and weaponry and in the end, Sweden ordered 48, all of them were shipped in parts on 13rd of September 1938 and assembled in Sweden. They served under the designation of Strv 37 (or Stridsvagn M/37) until 1953 (after the war mostly as training vehicles), when they were finally declared obsolete. There are several in running condition in the whole world, one of them actually participated in the Lešany tank show I visited earlier: 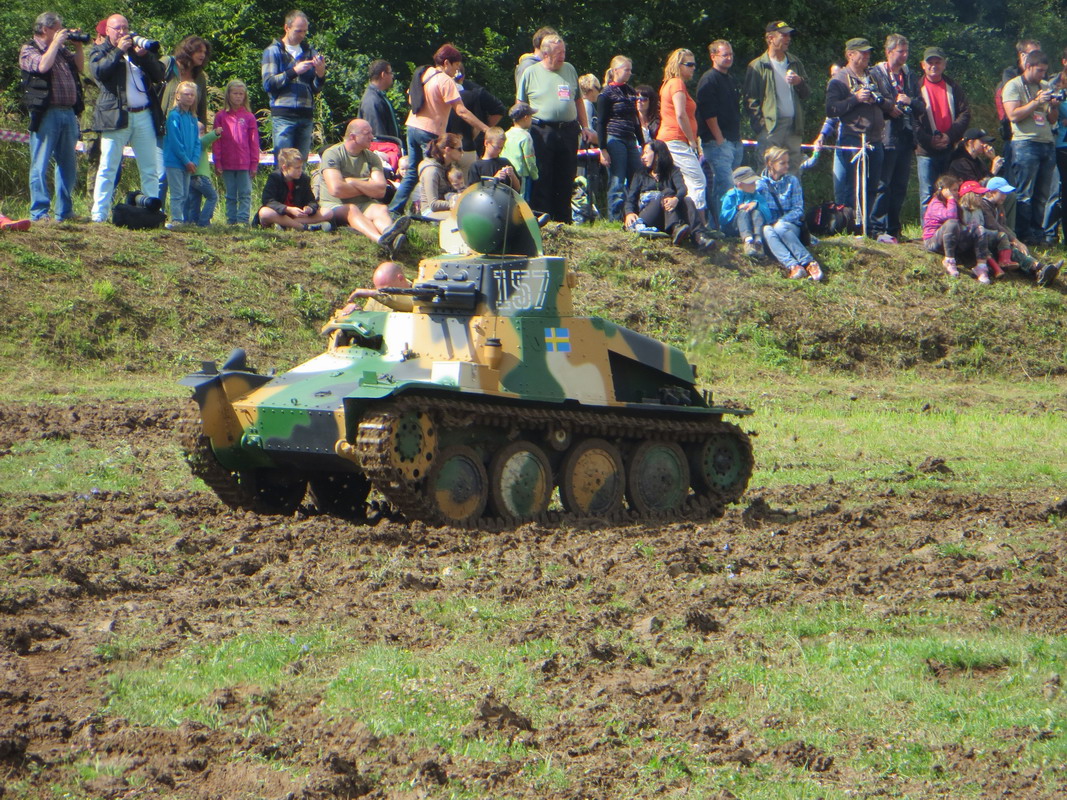 But this is not where their story ends. This is where our story begins.

It’s 1948 and the Europe is recovering from the most devastating war in mankind’s history. The (now virtual) battlefield is dominated by medium-heavy tanks (nascent MBT vehicles) and the age of light tanks – let alone tankettes – is long gone. Or, is it?

After the war, Ethiopia’s titular emperor and ruler, Haile Selassie was not blind to the dawn of the tanks. Bitter Ethiopian experience fighting Mussolini’s forces (equipped with CV tankettes) fuelled his belief that the Ethiopian army too needs armor not to stay behind. By that time, one of his military advisors was a man by the name of Niels Sahlin.

Colonel Sahlin was a Swede and he was also one of the men, who made the pre-war Swedish AH-IV purchase happen. He respected the Czechoslovak armor greatly and managed to persuade Selassie to have a look at what the post-war Czechoslovakia (working hard to secure arms contracts in “friendly” countries) had to offer. Selassie was reasonable: he knew his army would have no use for medium or heavy tanks. Sahlin pointed out that the Czech vehicles are rugged, reliable, easy to repair, they have decent ground pressure (which was important in the sandy terrain of Africa) and their engines don’t overheat.

In June 1948, Ethiopian delegation came to Czechoslovakia to witness the AH-IV (Romanian version) trials. The test vehicle performed well and the Ethiopians were very impressed – so impressed in fact that they decided to sign the contract for 20 of these modified tankettes immediately. This contract was signed on 25th of June, 1948 and was worth 535 thousand USD. The only modifications, requested by Ethiopians on the vehicles were to make sure the tankettes can handle high desert temperatures and sandy/rocky terrain of Ethiopia. These included mostly cooling system modifications (bigger radiator). Despite the fact the firepower of the vehicle was completely obsolete by 1948 (7,92mm HMG ZB-37), no upgrade was requested, because it was considered to be sufficient for the African conditions.

This somewhat improved vehicle was redesignated to AH-IV-Hb. “Hb” here means “Habeš”, an older Czech word for Ethiopia. The prototype was ready in 1949, it was tested personally by Sahlin and in September 1949 it was approved. On the picture below you can see it. Notice the picture of St.George on the side. 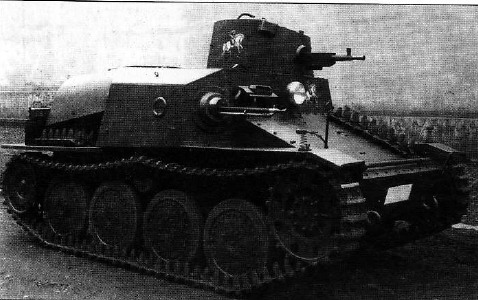 Serial production ran (with some slight delays) until early 1950. In May 1950, the tankettes were loaded on a ship and moved to Djibuti via Malmö. From Djibuti, they continued by train to Addis Abeba, where Haile Selassie personally attended the unloading/transfer ceremony.

This is however where the problems started. Ethiopian soldiers never had an armored unit before and they were afraid of the rumbling metal boxes. Some even considered the roaring tankettes to be cursed with black magic! Training and handling the vehicles on their own proved to be impossible, so once again, the Czechoslovaks would have to come to the rescue. An instructor was requested and ČKD accepted, sending a technician by the name of Jiří Labounek to Ethiopia.

The sands of Africa proved to be quite a challenge even for the rugged tankettes and the common soldier’s superstition did not help either. Labounek, upon arriving, was forced to perform the trials by himself and despite the soldiers chosen for tank training showed zeal in their training, it was often delayed by their fear of the vehicles and by the fact they never operated any armor before. This resulted in an incident where the unit leader drove one tankette off a cliff by accident, but luckily both him and the vehicle survived the event.

In the end, Labounek spent a year in Ethiopia and managed to train the basic cadre of tankers well enough. There would be one last test: a great military excercise in the desert sands, 250km from Addis Abeba. The tankettes managed to cross the distance without breakdowns, accompanied by only one refuelling car. All 20 tankettes participated and their crews were eager to prove their worth. Their opponent would be the famed Ethiopian cavalry, that – a decade earlier – assaulted the Italian invaders’ armor with spear and sabre only! The task of the cavalry was to envelop the tankettes and prevent them from moving. This would however not happen.

The tankette unit’s recon forces located the cavalry base, situated beneath an old volcano. Labounek – present as an advisor – suggested the tankettes should split into two groups and attack the base.

It worked perfectly. Two lines of tankettes roared thru the desert wind in perfect formation to hit the base simultaneously. The cavalry units were so surprised they completely panicked and were routed, leaving the training area in fear! After that, the excercise was ended, but it was a complete success. As a result, for his role in training the crews and the success of the endeavour, Jiří Labounek was decorated with high Ethiopian military award, the Golden Order of St.Gabriel.

And what became further of the tankettes? They served for many years, deep into the 70′s. In 1954, a shipment of spare parts was sent to Ethiopia. By the end of the 70′s, they participated in the battles between Ethiopia and Somalia, making them possibly the last tankettes in the world ever to see combat and the last vehicles of purely Czechoslovak construction to be actively used, a testament to their quality and the durability of the design.

In case the ZB-37 HMG designation doesn’t sound familiar: BESA is a copy of this MG (it was widely exported). The reason it was produced in Britain in the not-typical caliber of 7,92mm was to avoid the problems with other Czech machinegun (ZB-26) conversions into .303 Bren.