today, we are going to have a look at one of the least known German guns, the 81mm L/105. It was a smoothbore AT gun and as far as we know, it was never considered for a self-propelled gun platform, but it could make an interesting option for mid-tier German tank destroyers. 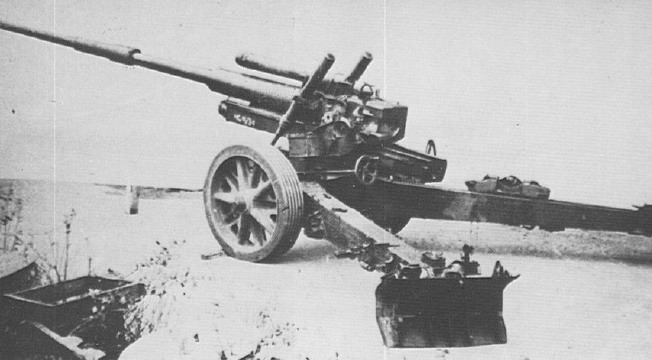 The origin and properties of this gun are somewhat mysterious. Its prototype was found by the Americans after the war on some artillery shooting range. The gun is designated as 8,1cm Panzerabwehrwerfer, which implies it’s a gun of the same type as the 81,4mm PAW 600, based on high-low pressure system with the intent to fire HEAT shells. It’s a smoothbore gun, but – just like the PAW600 – completely historical.

The barrel of this gun consists actually of two pieces, screwed together in the middle. The barrel could thus be broken down into two piece on the battlefield for easier manipulation. The rest of the gun however is pretty conventional, the mount (lafette) probably comes from the classic sFH 18 (150mm) howitzer, the wheels come from the 105mm K18 lafette. When moved, the barrel was actually removed from the mount itself.

The gun was supposed to fire an experimental 3kg Krupp HEAT mine – the plans for it were actually found in one Krupp facility by Allied soldiers. Apparently it was possible for it to penetrate cca 150mm, but maximum effective range of this gun is not known (believed to be significantly higher than the 750m of PAW 600). This however is likely compensated by lower muzzle velocity (around 500-600 m/s), needed to fire HEAT shells without having issues with shell fuses. Plus, since HEAT shell performance does not depend on high muzzle velocity (or, in some cases it actually is worse), there was no need to push the metalwork to the limit.

The caliber 81,4mm is probably familiar to you – it’s the caliber of the most common German mortar, the 81mm Granatwerfer 34. It was selected for two reasons:

- the shells for this gun (and for the PAW600) too were readily available, they were based on existing mortar shells

- the barrel was easy to produce, since the Germans already had enough metal-working machines to mass produce this caliber (left over from the mortar production).

In the end, the PAW series were supposed to be cheap and easy to produce, but the war was over before they could be truly produced en masse.