The M4 Shermans in WoT at the moment are only armed with the classic 75 mm, the fast firing 76 mm guns, and the 105 mm howitzer. In lieu of foreign weaponry such as the 17 pdr or the French 105 mm, WG has already likely modeled a 90 mm armed M4 as seen below.

This particular vehicle, called the M4 90V by WG, was built in 1944 in order to have 90 mm armed tanks in order to give American tankers a weapon that could more easily defeat German armor. I have not found an official designation of this vehicle in my resources so I can only assume that WG’s name is acceptable.

The M4 90V used the hull from the M4A3 and used a turret from the T26. The T26′s turret had the same turret ring diameter so mounting the turret was fairly simple. The M4 90V program was halted after it was realized that once the M4 90V program would slow the T26E3 program down and the T26E3s would be ready for combat as soon as the M4 90Vs making these hybrid Shermans rather pointless.

This is not the first instance that the US looked into arming the M4 with a 90 mm gun. As early as Oct. 1942 the Ballistic Research Laboratory looked into the plausibility of a 90 mm armed M4. The 90 mm M1 AA gun at the time would have to be heavily modified in order to squeeze into the turrets originally designed for the 75 mm M3 gun.  This included changing the ammunition which lessened the cartridge case and chamber capacity and thus decreasing penetration. An alternative proposal made by the BRL was to modify a 3 inch (76 mm) gun by increasing the chamber capacity which would increase penetration that would be comparable to the 90 mm’s(~150-160 range). This would have created a weapon very similar to the British 17 pdr which was used in the “Fireflies” successfully. Unfortunately nothing came from these projects.

The BRL’s 90 mm Sherman also featured a modified hull which reduced the silhouette of the vehicle.

In the fall of 1943 there was discussion between the Armored Board, Ordnance, and the Army Ground Forces for a 90 mm armed Sherman. In the end no 90 mm M4s came from this due to the AGF’s belief that tanks are not meant to fight tanks*, a mistake as German armor gave American tankers a rude awakening in the hedgerows of Normandy.

*This means on a large scale as FM 17-10 states tanks are to perform anti-armor roles.  It was the job of TDs and artillery to deal with concentrations of armor in WWII.

The M36 Tank Destroyer we have in WoT is in all practicality a 90 mm armed M4. The M36B1 even more so than the regular M36 as it shares the exact same hull as the M4A3 tanks. The Jackson’s birth is worth mentioning as well. The M10 Wolverine was first tested with a 90 mm in November of 1942, this project dates back to April of 1942. The M36′s development was slow as the same with most American vehicles. A new turret design was adopted and the M36 and it was pitched to Army Ground Forces, but the M36 got caught up in the confusion over a 90 mm gunned Sherman tank and was initially denied. Soon after it was pitched again as a measure against the Siegfried Line. The “Siegfried Line” excuse was also used to build the T28/T95. 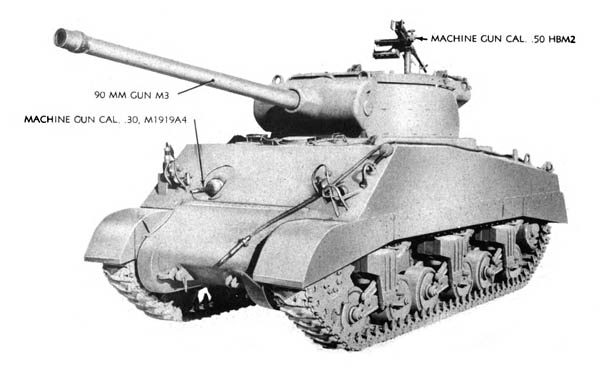 The M4 90V is likely to come in WoT as a premium vehicle. Tier 7 would be reasonable in my opinion. There is a subatomic sized chance that a 90 mm M4 would be a regular tank, but I can dream can’t I? The BRL’s super 3 inch gun is another dream of mine. The M36B1 is likely to be included into WoT as a hull module for the M36 in the future. The biggest gain of the M36B1 over the regular M36 would be mobility given by the Ford GAA engine which is currently unavailable to the M36.

Edit: The Chieftain has informed me that the GAA might be added to the M36 before the hull module patch.