today, we are going to start new series of historical articles, this time about Polish armor. Let me tell you some of those designs are pretty interesting.

Just like the early Czechoslovak armor development, Polish armor was based mostly on foreign technology. Poland starts to diverge from Czechoslovakia in the early 30′s, when the Czechoslovaks started to produce various designs of their own, while Poland thought it would be better to actually license the designs (notably the ubiquitous Vickers 6-ton tank, which was modified and produced as the 7-TP). The two most known vehicles of the Polish army were the TK tankettes (and their variants) and the 7-TP tank (which was – as I mentioned above – a modified Vickers 6-ton). There were other designs too and we’ll talk about them chronologically, so you get the “feel” for the upcoming World of Tanks Polish branch.

Unfortunately, as you can imagine, Polish World of Tanks branch is problematic past tier 6. But we’ll talk about the hightier options and possibilities.

The 1918 birth of inter-war Poland was not an easy one. Poland only two years old, Poland had to face a grave threat of Soviet invasion. However – although the Soviet sources were substantial, Polish army was not “green” either at that point. In fact, the core of the early army of inter-war Poland was based on Polish foreign units. One of the most important of them was the Polish foreign army in France under Józef Haller, that was formed in June 1917. The assets of this army were by no means meager – it was equipped by the French and Americans and by the time the war was over, the units, returning to Poland, took the vehicles home with them, including 120 brand new French FT-17 tanks, that were to form the core of the Polish armored corps.

These Renaults were concentrated in the Polish 1st armored regiment (1. pulk czolgowy), 75 of those were equipped with the 37mm Puteaux guns, the rest were machinegun models. These vehicles (and the whole regiment) took part in the Polish-Soviet war between 1919 and 1920. There were several heavy battles in this war, at one point the Polish got as far as to Kiev, on the other hand the Soviets pushed them back to Warsaw and only in March 1921 was the Soviet-Polish border finally confirmed by a peace treaty. This war saw widespread use of armored cars: there were several Polish types, come of them heavily improvised, but those won’t be the subject of this series. In the end, when it comes to armor, Poland actually came sort of on top: according to some sources, they lost 12 FT-17 tanks, but in turn captured several dozens of Soviet armored cars.

After the war, the FT-17 tanks remained the primary Polish tanks until the arrivel of Vickers vehicles in 1931. We’ll get to that point too, but for now, let’s have a look at the 20′s. In this time, Poland experimented with various armored cars and halftracks, leading to the wz.28 and wz.29 designs. By the end of 1918, Central Vehicle Works in Warsaw (Centralne Warsztaty Samochodowe – CWS) were founded. At first, the repairs and refits of cars and trucks took place here, but by the end of 1921, the plant started repairing the FT-17 tanks too and building their own Ford T Polish armored cars. The company actually grew quickly, by mid-20′s they were designing their own various cars and in 1928, the company was transformed to the well-known PZInz (Panstwowe Zaklady Inzynierii) company complex, responsible for the majority of Polish vehicle projects until the Second World War. And this is where the story begins. 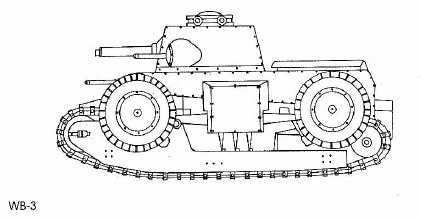 In 1926, the Polish army started a competition for the next Polish tank design. The competitors were the Warsaw Locomotive Plant and PZInz (back then it was still just one factory located in Czechowice). The soldiers demanded a 12-ton vehicle, capable of withstanding a 45mm gun fire at 500 meters (by that 45mm gun various obsolete constructions from as early as WW1 were meant, not the modern 45mm guns from the 30′s). It was supposed to have a 47mm gun in the turret, complemented by two machineguns (either 7,62mm or 13,2mm). It was also supposed to go as fast as 25km/h and to be equipped with electric ignition and a smoke discharger. Quite an ambitious project for the mid-twenties!

Warsaw Locomotive Plant designers won the competition by offering two possible variants: one was purely a tracked vehicle, the other was a wheel-cum-track design. Both prototypes were constructed in 1927 and in May 1928, the wheel-cum-track variant was tested. The design looked a lot like the wheel-cum-track Saurer design: the alleged advantage was that this tank could move much faster on the wheels an switch to tracks only ín rough terrain, saving both the maintenance and track wear.

For the trials, the wheel-cum-track prototype was designated WB-3. Unfortunately, the prototype failed during the tests: it was deemed unreliable, it could not reach the speed required and it was difficult to manufacture. As other nations have learned (for example Czechoslovakia), Poland too found out that the wheel-cum-track is a blind branch of armor development and as a result abandoned the program completely. The tracked prototype (designated WB-10) was never finished.

At this moment I’d like to take a short break and thank you for reading my historical articles by posting two Locust codes from Gamescom (if you used such a code already, it won’t work): you will find them here.

Despite the trials ended in failure, one thing could not be denied: Poland – often regarded poorly for their industry – could design their own tank in mid 20′s, a feat other “more developed” nations repeated only years later. As for the fate of the final prototype, nothing is certain, it was probably scrapped at some point.

Well, what can we say, it would be a fine Polish tier 1 vehicle. Low-power 37mm or 47mm gun could make it work. Unfortunately, not much info is known, at least in English sources, so it is clear this vehicle requires some additional research.