this article is based on the one linked above. It’s not a direct translation and I’ve added a few things I found interesting, but almost all credits go to the author “alternatehistory” and player “Giganaut” for his 2011 FCM forum thread and the renders. The original article title was “If there was no war” and it deals with the performance of superheavy tanks, such as the F1, including the analysis how they would have really performed in battle, were they ever built

As some of you might remember, the superheavy French tank FCM F1 was something, that was planned for World of Tanks a long time ago. Hell, even the model exists: 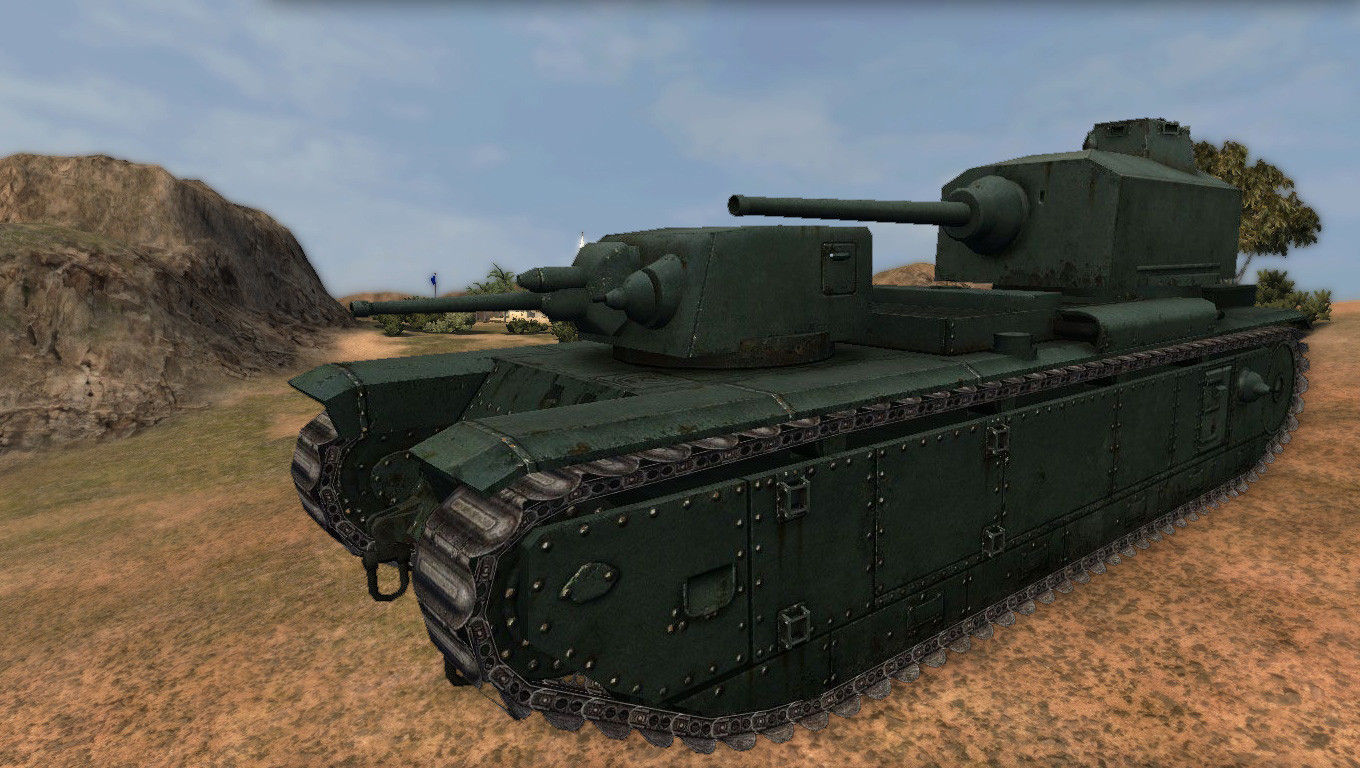 Also, an official description of the ingame vehicle was leaked some time ago:

In 1936 the French government requested design entries for a new heavy breakthrough tank, which would replace the Char 2C. Five companies proposed designs, the FCM company among them. A wooden prototype was constructed by 1940; it was destroyed in 1941.

This design is actually pretty interesting, but it wasn’t the only superheavy (multiturretted) vehicle concieved by the French (and I am not talking about the ill-fated Char 2C). Superheavy vehicles (well, for their time at least) were in fact a popular category before the war – monsters such as the Char 2C, British Independent or Soviet T-35 turned however to be a blind development branch: they were unreliable, huge, unwieldy, unreliable, had way too large crews and were almost useless in combat: they mostly served for propaganda purposes. The last of these monsters was the testament to Hitler’s megalomania, the Maus. However, it was deemed impractical and after this category of tanks disappeared (only to reappear 50 years later in computer games and in the minds of science fiction authors). 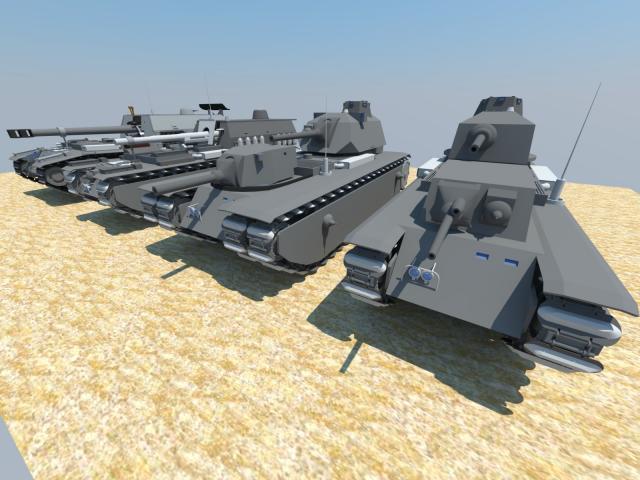 As I mentioned before, the FCM F1 was one of such tanks and one of three competing designs from three companies (FCM, ARL and AMX) in the superheavy program. Let’s have a look at it, from backwards though – we’ll start with the chassis.

The F1 designation belonged to the chassis design, that wasn’t very original. It was based on the B1 design as just like on Char B1, it had many support rollers and and the track design was also almost unchanged (strangely enough, despite all the research and technology development, this track type emerged again on the ARL-44 after the war, quite an anachronism at that point). Early in the development, it was also clear that the 75mm howitzer won’t do any good against durable German fortifications – because that was the original goal for its development, the assault on and destruction of German heavy fortifications on the Siegfried line. That’s why it was proposed for the vehicle to be armed with a high-powered 90mm or even 105mm guns. As engines, two Renault 550hp V12 KGM diesels were proposed – the goal was to implement a diesel-electric propulsion system the way Porsche proposed it for his later designs. Quite innovative for its time. It turned out to work well actually and allowed the 140 ton heavy behemoth to roll around as fast as 24km/h. 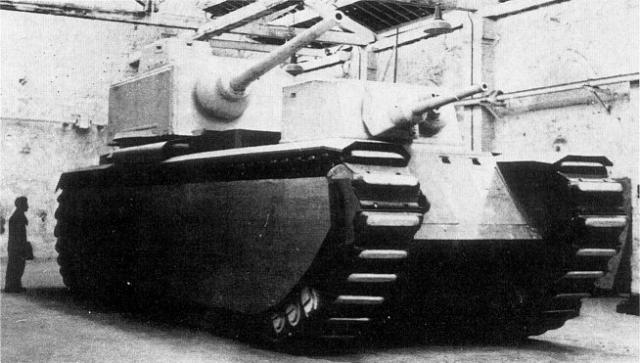 It was planned for the first prototype to be finished by Summer 1940, and by the end of 1941, the mass production of super heavy tanks was scheduled. As usual in tank development, these plans proved to be too optimistic, but the company Schneider recieved a contract for producing 4 experimental turrets as early as in January 1940 for the F1, the ARL tank and the AMX “Tracteur C” – two with 90mm guns and two with 105mm guns. The 90mm turrets were never completed, but the 105mm ones were ready on 4.3.1940. FCM showed a wooden mock-up of its F1 proposal 8 days later (12.3.1940) and the two other companies did quit the competition altogether, leaving the F1 as the winner. 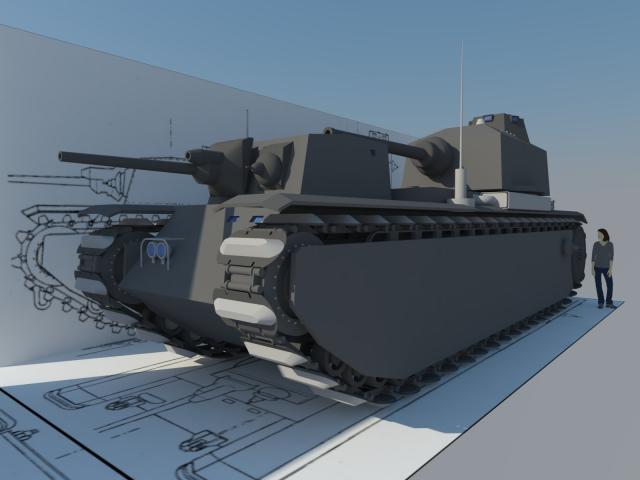 The vehicle had some serious flaws (it bogged down too easily on soft grounds, had zero terrain passability and the weight was way too much), but despite all that the technical committee evaluating the project approved it for production and made an order for 12 vehicles, with first being built in May 1941 and after that the production was to continue with 3-4 vehicles per month. In real life, no prototype was ever made and when France fell, the mock-up was destroyed later on.

And, this is where the history of the superheavy F1 ends. Or at least, it should end by all means. But we’ll make an assumption here: what if the war never happened? How would the production have looked?

From this point on, the text deals with alternate history, a speculation of how this vehicle would have performed.

As some of you might know, the company FCM was primarily a shipbuilding company. And, as we also know, marine scales are a bit different than the land ones – and it were these scales that the company used in the F1 building and development, there were even some sort of “dry docks” used in their construction. In this case, the company was also risking a debacle, when agreeing to build 12 vehicles instead of the first prototype (we all know how well this worked for Porsche Tigers). Apparently, the reason for this decision was the dread of another imminent war with the Germans. The metallurgical department of the company provided the armor of sufficient thickness, Schneider hurried to provide the remaining turrets with 105mm guns and Renault also delivered the engines, despite the fact the FCM engineers already proposed an alternative propulsion system with marine diesels. There was also a practical reason for all the haste: it was almost Autumn and there was no way the superheavy vehicle would pass the tests in Fall mud.

The war and necessity always provided the best incentives for development and where the French previously spent years drawing, re-drawing and designing, they could have managed in this case to build the prototype in 5 months. The main issue was the smaller turret for the 47mm gun, that would go thru several evolutions, until it would finally be considered useless and its constuction was given up for now. And so, the vehicle would pass the October 1940 tests (5 months from May) without one of its turrets.

Despite the army being skeptic, the superheavy vehicle would show its better side. The dieselectric transmission allowed the 140 ton vehicle to turn on the spot and the 1100hp engines propelled the leviathan quite well, even on quite steep slopes. And the 105mm gun was simply insane. In parallel to the tests, the 120mm armor plates (that simulated the vehicle frontal and side armor) were also tested on the proving grounds. They could not be penetrated even by the most advanced French 75mm guns! Of course, there were issues too, especially with the suspension and the fact the vehicle was too heavy. The design of the tracks was also far from ideal and other flaws concerned the periscopes and other devices allowing the crew to look out (insufficient) – the list of problems was in fact very long, but the main goal was reached: the superheavy assault tank was accepted in service and the order for 12 vehicles was confirmed.