Please note that this text is fiction, an analysis of how superheavy tanks would fare in WW2. No prototype FCM F1 was ever built.

The FCM workshops were bustling with activity: 12 tanks, all 75 percent completed, were waiting to be finished. The construction of them began with significant risk for the company before the final approval, but this risk allowed to send the tanks to the army well ahead of the deadline, after the order was finally approved. True, most of the corrections the army requested afterwards were not implemented, but F1′s successor – the F2 – was already starting to appear on the designer drawing boards. The F2 was to have all the wishes and improvements the army wanted for the F1 design.

The hull was now wider, but a bit shorter and to improve terrain passability, the vehicle recieved dual track and all the turrets were fitted with artillery rangefinders. The armament was also changed: instead of the 47mm gun, that was useless in fighting enemy fortifications, the forward turret recieved a 105mm Schneider Mle.1936 howitzer. This is how it would have looked (compared to the old F1): 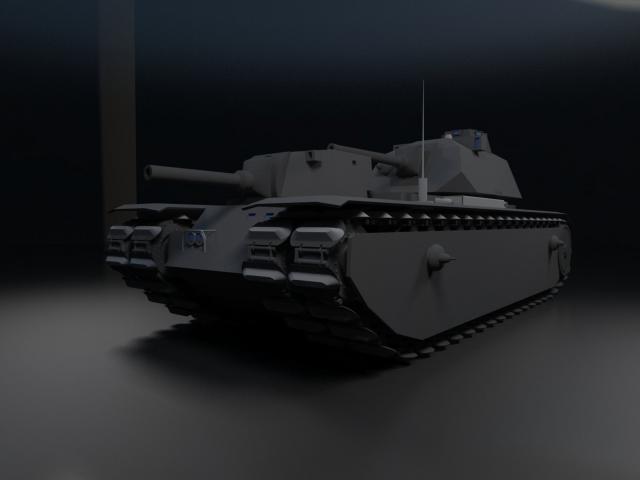 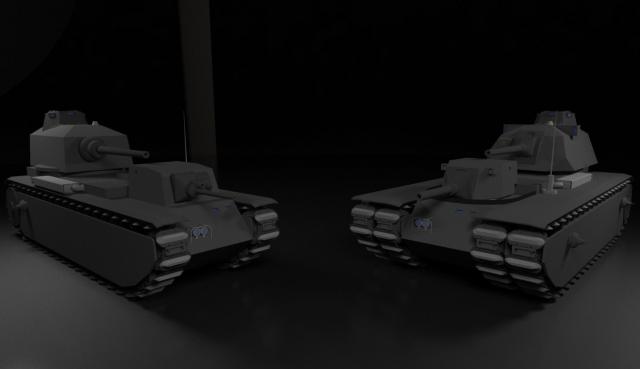 In the meanwhile, 12 FCM F1 superheavy tanks were transferred to the army on 23.2.1941. They formed a separate tank batallion and until summer they were used for propaganda purposes – the appearance of this monster on the front lines improved the combat spirit of French soldiers and it made the civillians believe that the home industry too can produce superweapons to fight the enemy. As a result, FCM got an oder for 36 more superheavy tanks and began to work on it.

Problems came around Summer 1941 – overloaded with the amount of military orders, the company Schneider did not succeed in producing the required amount of turrets (now, they had not only to produce the rear turrets, but the front turrets as well). This allowed Nicholas Strauss-Kahn, a young designer at FCM, to develop his idea of arming the FCM F1. He proposed to use the F1 chassis to produce a superheavy self-propelled gun. This decision was forced by the lack of turrets, but it turned out to be a good one.

The idea itself was not new: the French built such self-propelled guns as early as WW1 before, when St.Chamond built what was basically an artillery tractor, connected to a self-propelled gun. Considering the fact there was a huge number of artillery calibers in service, the developers decided not to limit themselves by one. Prototypes were made with both 194mm and 280mm guns, but also with the 220mm Schneider M17 howitzer. By the way, they were mobilized again in 1939 and proved to be quite effective against German field fortifications. This is how it looked: 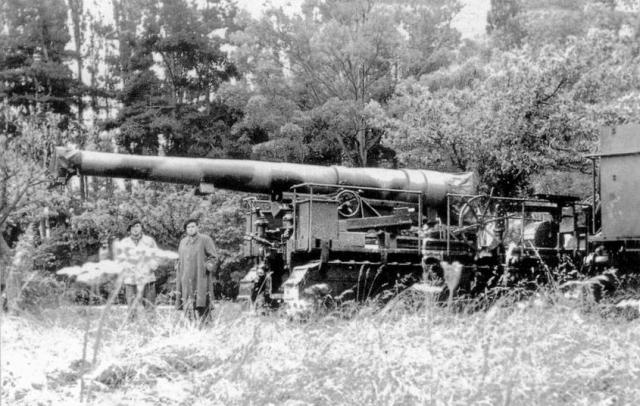 Either way, now the idea was to install the French 155mm Canon de 155 Grande Puissance Filloux (GPF) mle.1917 high-power howitzer on the F1 chassis. This gun would fit perfectly into the huge assault tank. As FCM already had enough experience with “risking” building something before the army orders came thru, it decided to tried its luck one more time and to start building 4 of these turretless tanks. During the construction process, the rear part of the vehicle housed now a superstructure, made of 60mm plates. Inside this superstructure there was the modified 155mm GPF gun plus the ammunition. The access to the superstructure was allowed via a passage in the rear part of the vehicle. The frontal turret was also not installed, there was just a miniturret with two 7,5mm machineguns on the roof of the superstructure, that could – if necessery – fire also at airborne targets.

All four SPG’s were finished on 11.7.1941 and they were presented (without the gun installed) to the military committee. The artillery corps members praised the vehicle, especially due to the fact they had more than enough guns to use for its armament. The guns were provided by the army within one month and firing tests were performed. It went so well that not only the army accepted the 4 pieces, they ordered 16 new ones under the FCM F3A designation. 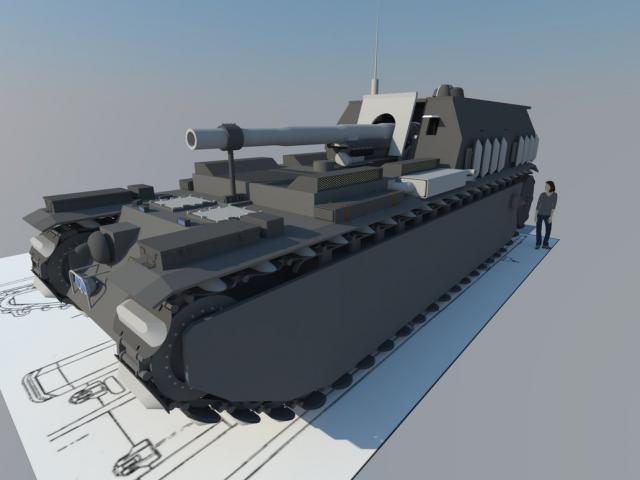 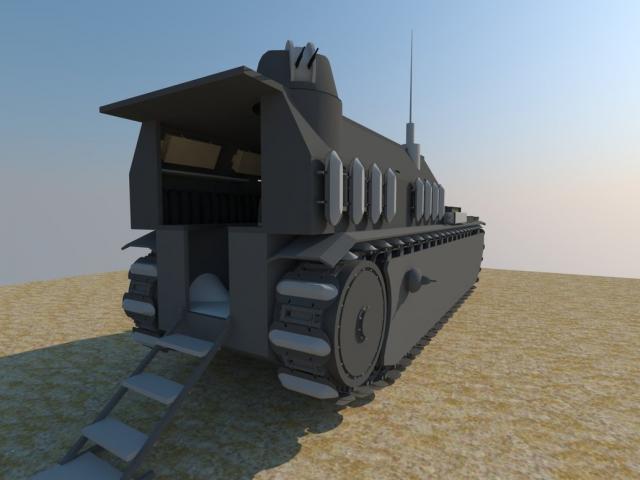 In the beginning of 1942, the French started finally mass-producing the FCM F2, replacing the previous model in the Toulon FCM plant production. However, despite the experience gathered previously, the production of superheavy tanks remained to be a complicated and very expensive thing. At the same time, the army started to re-evaluate the need for superheavy tanks too, especially since one such a vehicle, that was already proving to be somewhat obsolete, “ate” enough resources to produce ten G2 or several ARL42 tanks (SS: both are fictional designs in this “alternate time line”). Also, on the field of battle, the F1 was a really big target for the German aircraft. The F3A artillery however proved to be very effective artillery piece.

As a result of this experience, it was decided to gradually cancel the production of the superheavy F2 and to develop a new SPG on its basis – but this time for the 194mm GPF gun. The prototype was built in Summer 1943 and after the tests the mass-production started. It had a new chassis with torsion bar suspension and single wide tracks (not doubled anymore). The French partially copied German solutions and made the roadwheels cover themselves partially like in the Tiger (of course, the French swore they came up with it first). The 194mm gun with wide traverse angles was installed in a more spacy superstructure. To compensate for the massive recoil of the gun, the vehicle recieved a large brace in the rear part. A miniturret with twin AA Hotchkiss 13,2mm machinegun was installed on the superstructure. 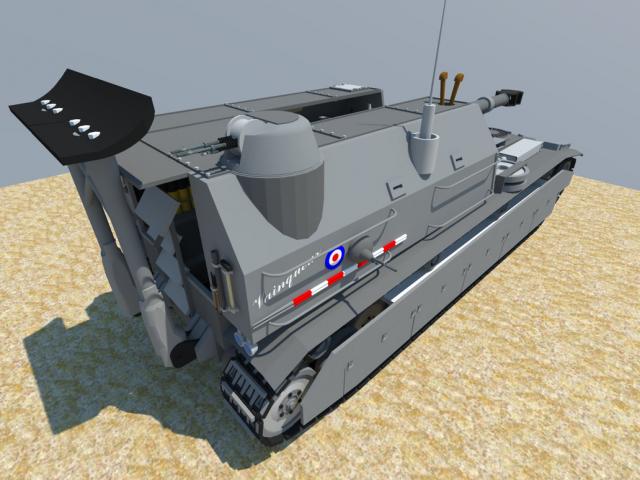 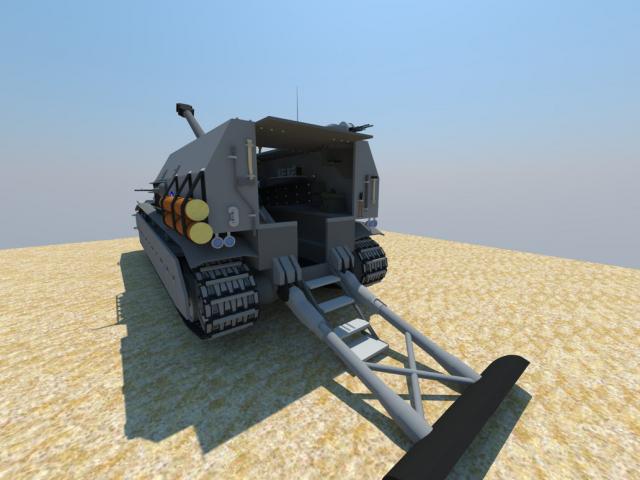 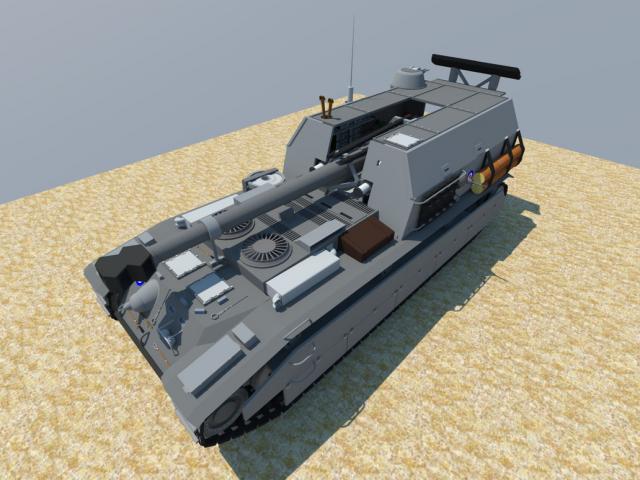 And here’s where the original article ends. While I usually try not to post anything about fictional vehicles, I think this post illustrates well the way the superheavy development would go. Eventually (if not discarded completely), the superheavy hulls, that had very limited tactical use (consider the impracticality of railroad travel, the impossibility to cross bridges due to weight, the sheer size and poor terrain passability in mud) would eventually evolve into strategic large superheavy anti-fortification artillery pieces, because in such a case, no rapid movement was required, simple because the enemy fortress would not go anywhere. On the plus side, such a vehicle is somewhat more practical than railroad artillery, that took (literally) weeks to set up for proper firing positions and for the resources and manpower required to operate, it was not very cost-effective (despite causing significant damage on several occasions in the war).

However, that does not mean such a solution is practical on the grand scale. Real life WW2 was a rapid movement conflict, where vehicles, capable of bombarding static lines were not required and the role could be overtaken by the regular mobile artillery units.