While we usually delve into obscure prototypes or late WWII tanks, it’s worth taking a look into the original panzer development, which is an interesting history of technological catching-up in itself.
When WWI tanks are brought to topic one cannot avoid mentioning the iconic ones, Mark I-IV, Renault FT-17 and the A7V.

Those of course were far from being the only armored beasts that grazed (or better, clawed their way through) the battlefield but the drawing boards were busy with even more projects, as usual going from the pragmatic to the downright unpractical, giving excellent precursors to Hitler’s megalomania.

Still, this was the technological cutting edge of the era, with both sides pioneering into armored warfare operations and experimenting original solutions.
While only one german tank design ever saw the battlefields of WWI, designing and prototypes were going strong behind the lines.

On November 13, 1916 the War Ministry commissioned a tank (the nomenclature Sturmpanzerwagen came only in 1918), disguised under the name of “A7V”.

With a planned gross weight of about 30 tons, the design was planned to be able of running cross country, spanning ditches up to 1.5m wide and to reach a top speed of 12km/h.
The armament was planned to include a cannon and several machine guns, while an 80-100HP motor was initially thought to be sufficient (2,5-3,3 HP/ton, could maybe propel the tank to walking pace), while the running gear was based on the popular Holt tractor, which was the base of most early tank designs.

On December 1916 a draft was published with two 100 HP engines (for a more acceptable 6,5 HP/ton), while constant changes in design happened until spring 1918.
Initially a 2cm decker was proposed but proved ineffectual against armor, so several cannons including the at the time dreaded 7.7cm FK96 field gun, which however proved too heavy for the chassis.

In the end, 57mm the belgian Maxim-Nordfeld QF cannon was chosen due to its low recoil.
This gun might seem puny by WWII standards, however it was able to defeat contemporary armor at fairly long distances, although it’s also fair to say that bulletproof would be a more appropriate description of WWI tanks.

Armor was fairly thick by WWI standards, with 15mm all around and critical points reinforced up to 30mm. This was a compromise between the initial design and a request to make the tank more resistant to artillery shells, which would have overloaded the suspensions.
Even this way, the tank was still overloaded and the drive train suffered from high wear and tear, something in common with late WWII designs. 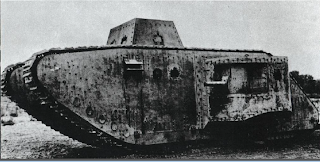 After the “Cambrai shock” the German army started evaluating to imitate the concept of British rhomboid tanks, as they were seen a superior cross-country design.
This ended up in the A7V/U project, which looked fairly similar to the British Mark IV and was armed with 2 5.7cm cannons in side sponsons.

Larger than the entente tanks, 2 110HP engines were far from enough for propelling the nearly 40 ton chassis and led to a front-heavy tank, while the tracks were easily fouled with sand.
Deteriorating war situation and resource scarcity led to the abandonment of the project in September 1918.

This however wasn’t the only planned A7V variant and some more original design were made.
One of those was the A7V-flakpanzer:

Armed with 2 captured Russian 76.2mm cannons, it was parter of a broader effort to motorize anti-aircraft artillery and it might very well be world’s first SPAAG.

Other variants included a battle supply carrier, motorized trench-digger and a radio carrier, but ultimately the chassis mobility was seen as insufficient for German stormtrooper tactics (a problem shared with entente captured tanks), so new designs were prepared for Plan 1919. 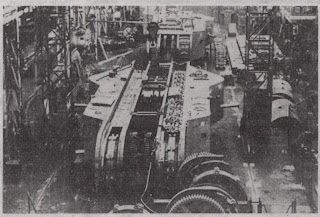 Even before completion of the first A7V, an even larger tank was planned.
Called the K-Wagen, it was intended to be an heavy breakthrough tank to be ready for 1919.
The precursor of WWII super-heavy designs, requirements included 4 cannons (or 2 cannons and 2 flame throwers), several machine guns and the ability to cross trenches up to 4 meters wide.

Specs varied during design, and the 13 meters long vehicle started from 100 tons in weight (to be propelled by 2 measly for the task 200HP engines!) and ended up to 150 tons, to be powered by 2 Daimler engines, providing a reasonable 650HP each.

4 77mm fortress guns would have provided considerable firepower, while 30mm all-around armor was a pretty good protection, but all in all, the vehicle was soon considered unpractical and fit only for positional warfare, especially as the tank had to be broken-up for transport and rebuilt for combat.
Still, 2 of those armored monsters were almost finished by the end of the war, almost ready for initial testing. 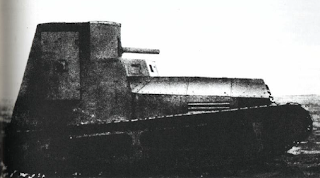 The worsening of the war situation led to a radical change in german tank design.
Instead of heavy assault tanks lighter designs were favored, using simpler automotive designs derived from Daimler cars and engines in order to create cheap and simple to manufacture tanks, not unlike the late WWII E-series.

The first Vollmer LK I prototypes were rejected on January 1918 due to insufficient armor protection, as the paltry 8mm were often insufficient to resist even close range rifle fire.
The 8,5 tons LK II fared better, with armor up to 14mm and armed with a quick firing 5,2 or 5,7cm cannon in a rear casemate design.

Weak suspensions found in testing halted the development, although it was also proposed to rearm the tank with a 3,7cm KWK. This design was to become the basis for the Swedish Stridsvagn M21.
Improving on this, Vollmer proposed a LK III design, with engine and transmission at the rear, using purpose built parts and sporting a front turret, which due to the end of the war remained only on paper. 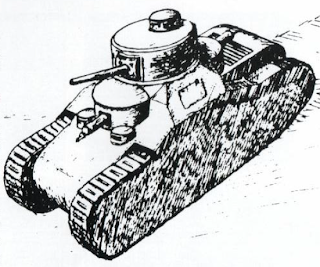 The poor battlefield performance of A7V led to the design and development of a new generation of assault tanks.
Along with the lighter designs a new heavy tank was proposed under the name of Oberschlesien, or Upper Silesia.
The drawings showed a very modern design for the era, with driver upfront, separate fighting and engine compartments, raised weapons in rotating turrets.

Great care was placed on battlefield mobility, leading to a very light ground pressure of 0.5kg/cc.
The 20 tons tank was powered by a 180HP engine for a top speed of 16 km/h, armed with either a 3,7 or 5,7cm cannon and 2 machine guns, while 14mm of armor gave it decent protection.

All in all, the central powers found themselves hopelessly trying to catch up and the end of the war led to total stasis for several years.
Still, had the war went on for longer the central powers showed that they could eventually field designs able to match anything fielded by the Entente.
1919 and 1920 would have shown a much changed battlefield but this would be a topic for a pretty different article…