welcome to part 2 of the Hungarian series. It’s a bit unusual to have part 2 and no introduction to the Hungarian army yet. Part 1 dealt with the most modern Hungarian projects to “whet your appetite”, but now it’s time to start at the beginning. Hungarian branch will definitely be one of the most interesting branches of the upcoming EU tree, so let’s have a look at them. As I wrote earlier, I imagine the branch to be something like this:

Of course, that is just my imagination, but it should give you an idea about the composition.

Introduction to the Hungarian Army

The Royal Hungarian Army (Magyar Királyi Honvédség) was without a doubt one of the most powerful European allies of Germany in World War 2 and – with the exception of Italy – the Axis power with the best armored forces. But it was not always so. After the Great War, the once great Hungarian Empire was in ruins. The war was lost and during the process of post-war map redrawing, Hungary lost a huge part of its former territory to the newly emerging nations, including Czechoslovakia. The situation was made even worse by the poor agricultural and social situation of the land, leading to years of political instability and civil unrest.

The real problems started during the war already: in 1918 the war was going badly, leading to the resignation of the wartime government in 1918. Pro-peace forces in Hungary took the opportunity and Count Mihály Károlyi proposed a new government, consisting of a right-wing and social-democratic coalition. The Hungarian King at the time (Charles IV. of the Habsburg-Lorraine dynasty) was however reluctant to confirm Károlyi’s appointment, which led to huge demonstrations, forcing the king to accept the situation. After his appointment, Királyi started negotiating for peace. His results however were very problematic for Hungary: both Slovakia and parts of Romania (a feud that would spark hostilities for decades to come) declared the intention to secede from the Hungarian Kingdom, which – in Slovakian case – led to a short border war in first week of November 1918, in which the experienced Hungarian army pushed the Slovak (essentially volunteer) forces from Slovak regions. However, after diplomatic pressure from France, Hungary was forced to retreat from what would later become Slovakia. In the meanwhile, Prague (the capital of the newly born Czechoslovakia) mustered its forces (consisting of experienced troops who formerly fought on both sides of the Great War) and took the rest of the Slovak territory.

On 16.11.1918 in Budapest the king was forced to resign, parliament was dissolved and Hungary became a republic with Count Károlyi as its first president. The situation in Hungary was bleak – World War 1 was understood as the worst national defeat since the Turkish incursions, there were problems with food supply even for the capital and riots were daily occurence. Such turbulent times always do support the rise of extremism, that was in Hungary’s case represented by Bela Kun, who founded the Communist Party of Hungary, that quickly rose to popularity.

In the meanwhile France was very clear in its pressure on Hungary to let go of the Szeged and Debrecen territories (including the cities), which was something unacceptable for both the government and the people. Desperate for help, the government (now controlled by social democrats) turned to Béla Kun, a hardcore communist (who wanted to impose the proletariat dictature on Hungary) for help. In March 1919, the government was renamed to the “council of people’s commissars”, a huge amount of property was nationalized and political opponents of the communists were imprisoned. Naturally, Hungary essentially becoming a bolshevik state did not make a lot of people happy. France was also not happy – French Prime Minister Georges Clemenceau was not interested in having what he saw as communist bridgehead in Europe. An anti-communist coalition was struck and in April 1919, Romanian and Czechoslovak armies attacked Béla Kun’s bolshevik Hungary. Hungary was not alone however, as the Red Army was pressing on the Romanian forces also. That didn’t help though, the Red Army was stopped, Hungarian forces were routed (many capable officers deserted to the newly formed anti-bolshevik National Army, formed in Szeged by admiral Miklos Horthy). In the end, the communist regime fell and the new government formed after 6.8.1919 took harsh measures against the former bolshevik leaders. Leading communist officials were arrested and many were executed. Béla Kun himself managed to escape into exile and moved to Moscow in 1920, but he did not escape his fate in the end: he was arrested on Stalin’s orders in 1939 and executed.

As a result of this tragic year, it was decided to name Miklos Horthy the “regent of Hungary” (1.3.1920). From January to April 1920, negotiations were also held regarding the Hungarian territory losses, resulting in the Trianon treaty, that confirmed them. It was this treaty that would later lead Hungary straight into Hitler’s hands, but in 1920, the situation was different.

By this treaty, Hungary lost 66 percent of its territory (that was split between Czechoslovakia, Romania, Serbia, Croatia, Slovenia and Austria) and 60 percent of its citizens. Furthermore, it was decided that Hugary may not ever again join Austria in one state, the Hungarian army was severly limited (to 35 thousand men) and banned from using chemical weapons, armored vehicles, airplanes. The amount of artillery was also strictily limited.

But that was it. No more war, no more defeats, Hungary took a deep breath and started working on its prosperity. The last echoes of the old order – two Habsburk attempts to seize power in early 20′s – were quickly taken care of, as were remnants of the bolshevik regimes. Future finally looked brighter for Hungary, or so it seemed…

As I mentioned above, Hungary was banned by the Trianon treaty from having any armored forces. However, just like Germany, in the early 30′s, as the Allies’ grip on these treaties and their enforcement became looser, Hungarian army – previously very poorly armed – had started to experiment with tracked vehicles.

At that point the leading force behind the tracked vehicle innovation was Nicolas Straussler. A car designer of some renown, the was active mostly in Britain and co-developed for example the Alvis-Straussler AC1 and AC3 armored cars. However, Straussler wanted to break thru in Hungary too and – apart from various personal cars and trucks – he also made a proposal for a tank.

These activities were of course in direct break of the Trianon treaty and had to be kept strictly secret. That’s why Straussler’s vehicle was originally designated as an “agricultural tractor” (vontató), a name that was supposed to fool anyone nosing around about its true nature. The construction Straussler proposed was quite interesting, consisting of two big and two small roadwheels, capable of independent lift of each wheel (that allowed for some quite impressive terrain passability). Straussler offered his first project, designated V-3 to the Hungarian army in 1933. It looked like this: 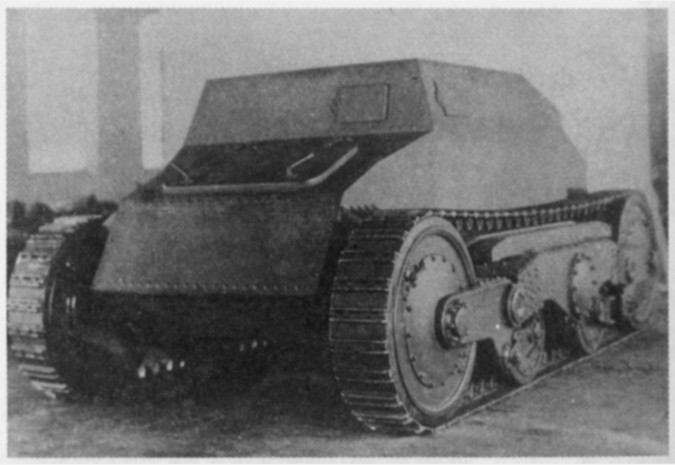 The army liked the proposal and allowed for one V-3 prototype to be built. The prototype was finished in Summer 1935 by “Weiss Manfréd Rt.” company – compared to the original proposal, the suspension was made sturdier. The hull was riveted, consisting of steel plates, with vision slits being cut in it in front and on the sides. The V-3 prototype also had a circular hole in its roof to mount a turret, but the turret itself was never mounted, as the V-3 was simply a test rig to verify the quality of the concept. The engine was in the back. There was an interesting attempt to actually make the vehicle amphibious by mounting large floaters on the sides, that actually worked.

The V-3 prototype was also tested in Britain (Straussler offered it to the British army) in 1935, with a different engine solution (two engines propelling each side independently), but in the end, priority was given to the Mk.VI light tank and nothing came of it. The British variant had a turret already according to some sources. Furthermore, in 1935, the vehicle was offered to Japan (the Japanese were not interested, nothing came of it. An export version with turret was proposed in 1936, but like before, noone was interested. 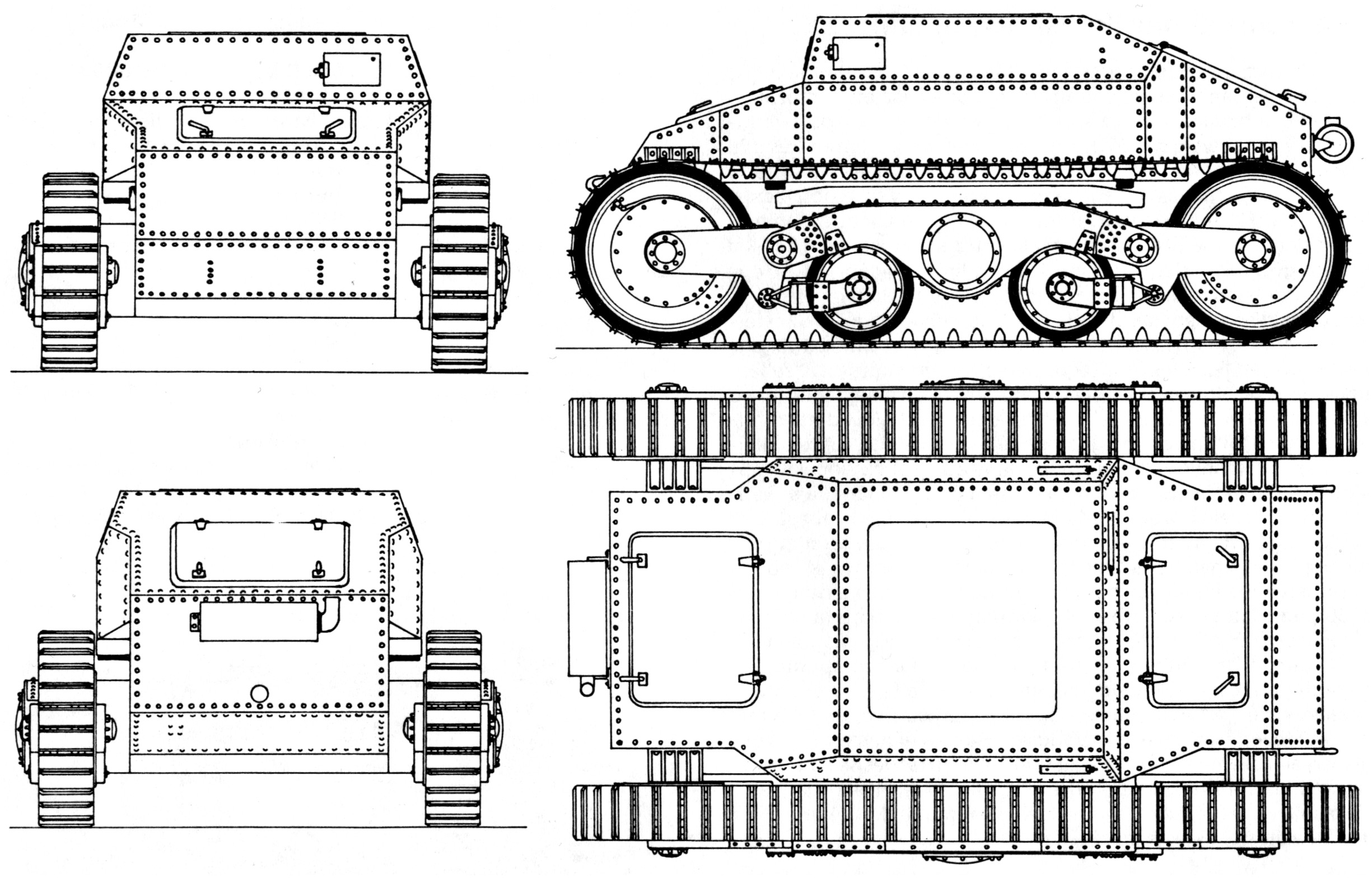 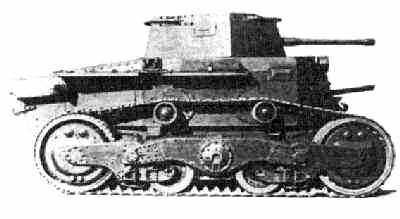 Encouraged by the positive feedback on his V-3 test vehicle from the Hungarian army, Straussler designed a fully-equipped light tank (designated V-4) and proposed it to the Hungarian authorities in 1936. The prototype authorization was confirmed and one prototype was built in 1936, again by the “Weiss Manfréd Rt.” company. Unlike the V-3, V-4 suspension had two support rollers. The hull was mostly welded (although some riveted areas remained) and it was equipped by a rectangular turret with a 37mm gun. The vehicle was designed for 4 crewmen (driver, commander, gunner, loader) and was powered by a V8 160hp Manfred-Weiss engine. Just like with the V-3, an amphibious version also existed (with large floaters). 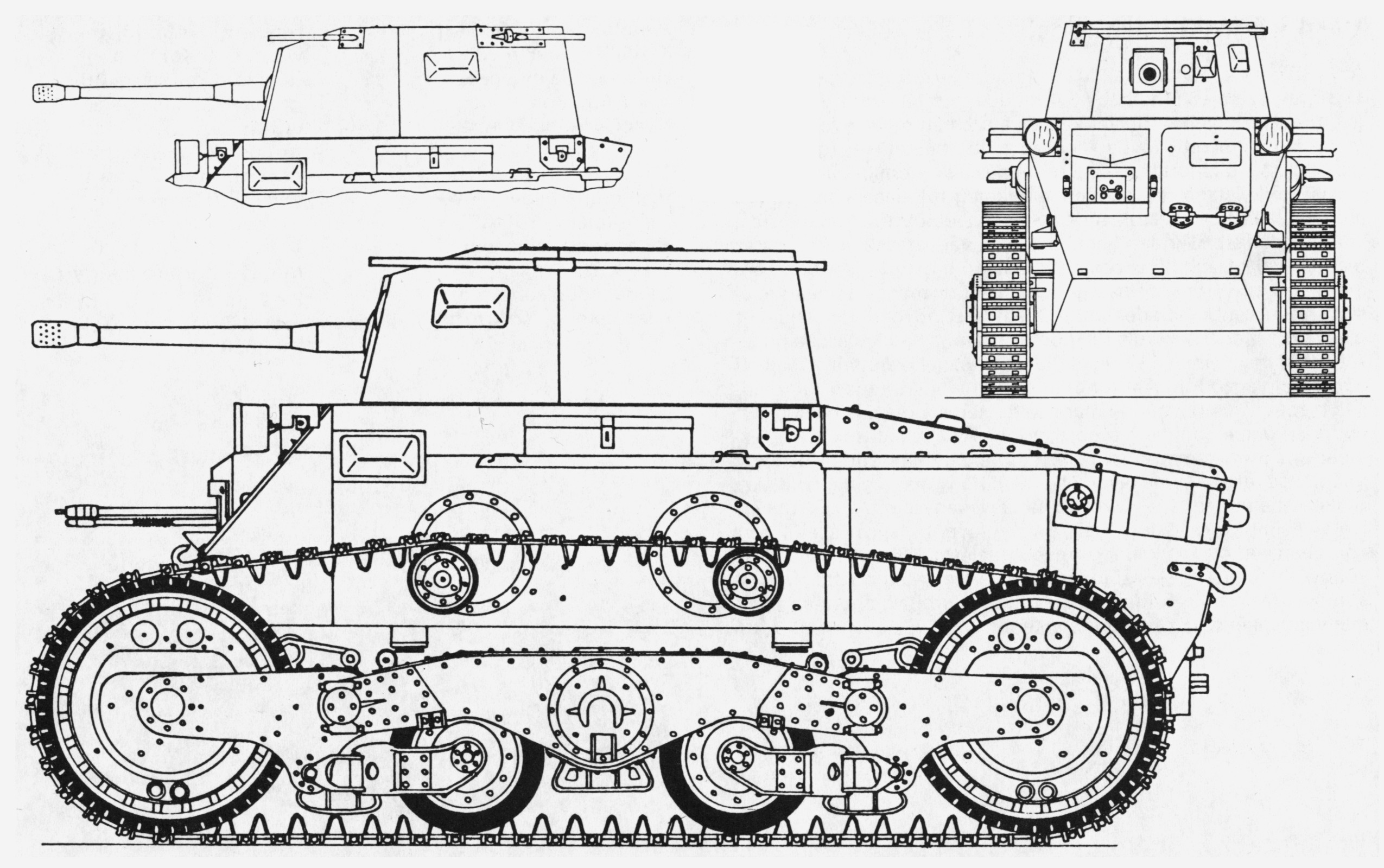 Some sources state 4 prototypes were made, but recent Hungarian researchs points at the fact there was in fact only one prototype, but it was rebuilt numerous times based on Straussler’s demands. The vehicle was actually not offered to Hungary first: as early as 1936 it was trialed and shown in Great Britain and possibly Italy. In 1938, the prototype was renamed to V-4/40 (based on the installation of a 40mm licensed Bofors gun instead of the earlier 37mm gun of an unknown type) and returned to Hungary for Hungarian army trials.

During these trials it was shown that the vehicle was quite fast (50km/h), but it had some serious flaws: it was too heavy and could tip over easily. Furthermore, the driving performance of the vehicle was very bad (the ride was very “bumpy”), not allowing for any aimed shooting when the vehicle was in motion. Overall, it was a disappointment to both the army and Straussler. At that point the Hungarian army stopped even pretending to adhere to the Trianon treaty and publicly stated it would be ordering 110 armored vehicles. Straussler secretly hoped he’d be the one to win the trials with the other competitors being the German Panzer I and the Swedish Landsverk L-60, but that was not to be. In the end, it was the Landsverk, who won the competition (L-60 would later become the Toldi), because its construction was deemed the most advanced. 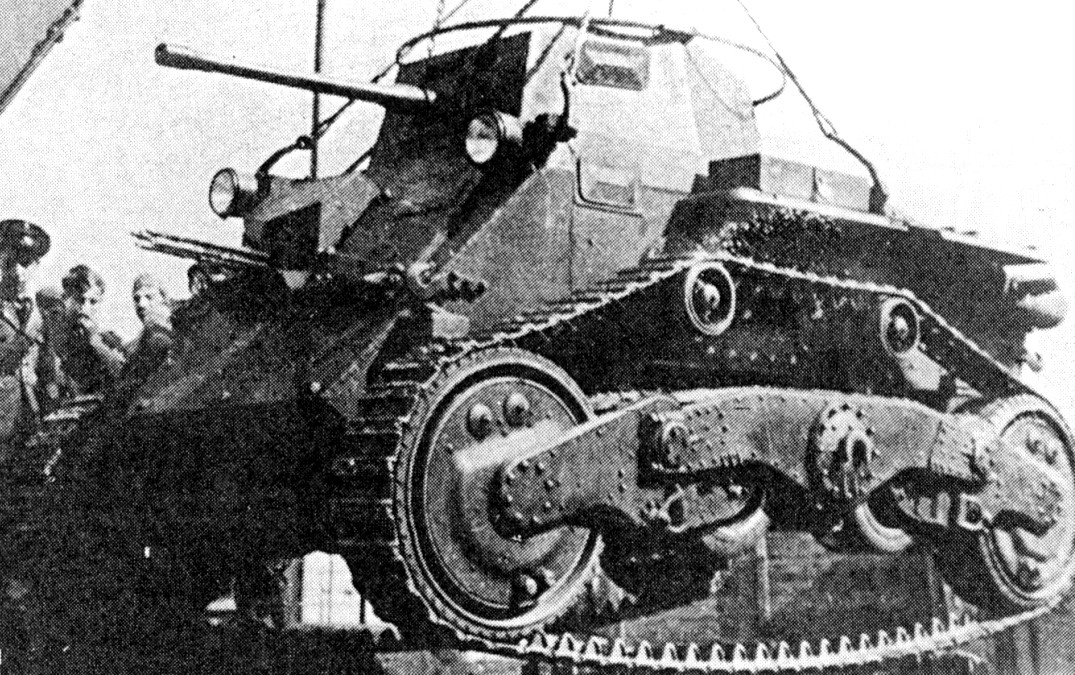 What happened after that is unclear. In one version of the events, 4 prototypes existed: one stayed in Hungary, other three were sold abroad, one of them possibly to Italy. The vehicle that stayed in Hungary was captured by the Red Army in 1945, it was confiscated and moved to Kubinka, where it was tested. Some historians think it’s hidden in Kubinka’s depository until this day. However, despite being unsuccessful, one thing makes V-4 important: it was the first indigenous Hungarian armored vehicle.