The American designs of Walter Christie laid unquestionably down the foundations of modern Soviet tanks. During their modification and production, both the Soviet designers and the workers along with the entire production line gained immense experience. And then the time came to show what they can do in combat.

The BT tanks represented significant progress in Soviet armor development. In fact, it was so significant that it allowed the Soviets to completely change the way they would be used. And the Soviet Union had – because of its aggressive foreign policy – enough opportunities to try the new tech out. BT tanks also played an important role in training new crews and command staff. Unfortunately, the experience gathered in various conflicts was completely wasted during the defense of Soviet Union’s very existence.

The first opportunity to deploy and test the new fast tanks was the Spanish civil war. This somewhat confusing conflict became the weapon proving grounds for the future main enemies: the Axis powers and the Soviet Union. The gun import embargo that was officially in place was constantly broken by both sides. There were the so-called international brigades fighting for the Republican side – these consisted of leftist volunteers from 17 countries. Soviet Union and other countries supported the Republican side even with arms shipments – however, it was no act of mercy or publicly declared “help to communist comrades”: all the shipments were covered by gold from Spanish gold reserves.

On 24.7.1937, Spanish cargo ship Cape San Augustino sailed from Sevastopol – loaded with 50 BT-5 tanks. They were not new tanks, but all of them underwent a general refit in the Plant No.48. The Soviet tech was accompanied by a group of Soviet “instructors”, mostly members of the 5th Mechanized Corps of Konstantin Kalinovsky. The ship broke through the blockade of pro-Franco vessels and on 18.8.1937 it arrived in the Cartagena port. Spare parts arrived later via the Soviet ship called “Kursk”.

A unit was put together from these tanks, called “Regimento Carro Rapido” (“fast vehicle regiment”). Pablo Otez was the commander of the unit – but his real name was Pavel Kondratyev. These tanks underwent their trial by fire in the battle of Zaragoza, where the tanks supported the assault of the XV.International Brigade on Fuentes over Ebro. The Republicans paid for this assault with the lives of 37 tankmen and the loss of 16 tanks.

(On the picture: the Winter War was a hard trial for the Soviet tankers, here a captured BT-5 supports the attack of the Finnish infantry) 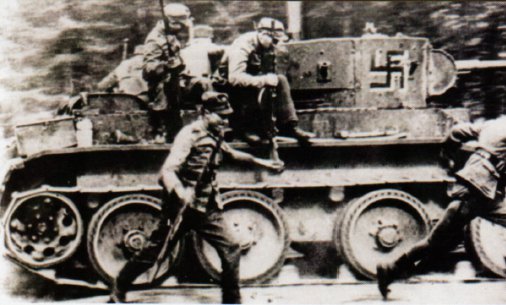 Another important operation was the fight for the fortress-city of Toruel. The operation took place from December 1937 to February 1938. Despite many people connect Spain with “warmth” in their minds, the battle was fought in the mountains with the temperatures dropping to -20 degrees Celsius and there was 30-40cm of snow on the mountain roads. Furthermore, the tanks were deployed in city fights. The battle for Toruel did cost the Republicans 15 more tanks – most fell victim to the firebombs dropped from higher stores of buildings. The BT-5 tanks however did claim two armor kills – two Ansaldo tankettes.

One more thing is worth noting: the March battles. During one such battle, Lt. Razgulyayev’s BT-5 was surrounded by five fascist Panzer I’s. The crew of the BT-5 managed to destroy one Panzer I by fire, but after that the machinegun fire destroyed the BT-5′s optics. Lt.Razgulyayev decided to break through come what may and rammed the closest Panzer I. The German tank tipped over and started burning, because the fuel from its damaged fuel tank leaked on the hot engine. The remaining Panzer I’s retreated – it was the first documented ramming by a BT tank.

By the end of the March, the Soviet advisors and instructors left the regiment and its remains were incorporated into the Republican army’s tank brigade. By that time only 22 men were left from the original 85 volunteers and 18 tanks from the original 50 were assembled together using parts from the other vehicles. BT tanks were not used only by the Republicans – a few captured pieces were used by General Franco’s units too.

Overall, the deployment of tanks and volunteers was considered to be a success. The crew recieved high state awards after their return to their homeland and they lectured about their experiences in military schools and at units. The BT tanks had few matching opponents however, so the conclusions from anti-tank combat were not very relevant. The experience from street fighting and the tank’s vulnerability to short-range infantry assaults were supposed to be the warnings, but little heed was paid to them.

In 1938 another conflict that included the BT tanks erupted – the Khasan lake battles. Despite the fact most Soviet sources stated until recently that the tanks that took part in the battle were BT-5 and BT-7 tanks (with foreign authors simply copying that fact into their own literature), late discoveries of Soviet historians correct this statement and mention only the BT-7 tanks.

To crush the Japanese units stationed at the foot of the dormant volcano called Zaozernaya, the Soviets allocated 2nd Mechanized Brigade – its recon batallion was equipped with BT-7 tanks. However, their combat performance was not exactly stellar. It started with a badly handled forced march over 45 kilometers, that took several batallions 8 to 11 hours. The brigade then recieved the order to support the assault of 40th Rifle Division. The recon batallion was to quickly overcome the firing line of the Japanese guns, to break throught the Japanese defensive line and to crush Japanese rear by attacking the northwest foot of the Zaozernaya and Bogomolnaya volcanos. The attack begun on 6.8.1938. The initial phase went smoothly and 16 tanks crossed the firing lines practically without losses. However, shortly afterwards they ran straight into a bog and 14 tanks got stuck hopelessly. In order to prevent the Japanese from capturing the tanks, the crews had to assume circular defensive positions around them and wait for reinforcements. 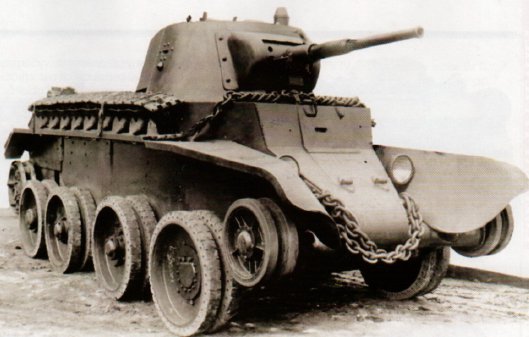 The failure was caused mostly by personal changes. Three days before the forced march, the commander of the brigade, chief of staff, the brigade comissar, all batallion commanders and some lower officers were all imprisoned as the “enemies of the People”. They were replaced by people who – although very loyal to the communist party – had less (or sometimes no) experience and the end result corresponded to that.

The BT tanks fared much better during the Khalkin Gold battle and the battle at Lake Buir Nur. Based on a bilateral military aid treaty from 12.3.1936, units of the 57th Independent Corps were placed in Mongolia. The Corps was then by attaching more Soviet and Mongol troops transformed to the 1st Soviet-Mongol Army Group, with Georgiy K. Zhukov appointed as its commander.

Two tank brigades were included in the 1st Army Group: 6th Brigade under Col.M.Pavelkin and 11th Brigade under M.Yakovlev. The 11th Brigade was roughly two thirds rearmed to the new BT-5 tanks. They bore the brunt of the war in this region. The brigade moved from Under Chan over Bain Teren, Ara and Dzhargalant to Matad, quite an exhausting feat by itself, as the sun was scorching and the temperatures ran as high as 40 degrees Celsius. The biggest issue was the crew exhaustion and the concentration of gasoline fumes in the engine compartment. The tanks had to drive in line far from one another due to the clouds of dust so the batallions were sometimes spread over 15 kilometers. At first everything went fine, but on second and third day, crews started to exhibit sunstroke symptoms and several tanks had their engines ingiting.

On 3.7., the 11th Brigade recieved the order to move to the Bain Cagan mountain area and in cooperation with 7th Motorized Brigade and 24th Motorized Regiment to break the defense of Japanese 23rd Infantry Division, occupying the west bank of river Khalkin. At 9:00, one company from 2nd Regiment with 15 BT tanks and 9 armored cars managed to flank the Japanese positions and to rout a Japanese infantry regiment along with a hippomobile anti-tank battery.

During the second phase of the operation, a three-direction attack was planned. Unfortunately, some units of the 11th Brigade got lost and the organized assault, planned for 10:45 could not have been carried out. Zhukov then ordered the tanks to attack without infantry support. The attack was eventually successful, but the price for success was high. Tanks suffered 62 percent losses, caused especially by the fire of AT guns and by infantry assaults of Japanese soldiers, equipped with “Hirohito cocktails” (Japanese name for firebombs).

In the next phase, the tanks were used to support the infantry, which was very far from the originally concieved tactic. The result again reflected this fact: 11th Brigade suffered 67 percent losses. Even the brigade commander fell. The brigade was then renamed to the “Yakovlev Brigade” in his honor.

The main reason for these losses was the poor armor of the tanks, combined with low speed. The tanks basically had to move with the infantry running speed. That way they couldn’t have used their main advantage – their speed – to traverse the places targetted by Japanese guns as fast as possible. Japanese guns, especially the 70mm regimental howitzer and the 37mm AT gun, penetrated both the side and frontal armor of BT tanks without any problems and took a bloody toll amongst the tank crews.