this is something that came up in connection with looking for the upcoming tier 8 of the Sturmtiger branch. Walter Spielberger in his book “Tiger und seine Abarten” (Tiger and its variants) mentions two interesting projects: the 305mm and 420mm GW Tiger (page 177 of the German issue, in case you are interested). Both were supposed to be built on a chassis, using the Tiger tank elements and utilizing 305mm and 420mm Škoda mortars. Not sure why the 305mm project was not selected over the (fake) GW-E100, perhaps it was the fear of power creep? Anyway…

Czechoslovak Škoda was before the war known as the producer of possibly the best artillery in the world and this role has not changed during the war under German occupation. Several projects were prepared in Škoda (including a native-built 128mm cannon, of which little is known IIRC), including two superheavy mortar projects, the 420mm Mörser and the 305mm B20. The B-series designation of the 420mm project is not known (B series weapons was a product line of Škoda of heavy mortars), German designation was Gerät 3-4203.

From Czechoslovak source (Dubánek: Od bodáku po tryskáče), we learn of these projects the following:

During WW2, Škoda was working on a heavy 42cm mortar (with recoil), factory designation is not known. Apart from the barrel recoil itself (850mm), the upper part of the mount (lafette) also recoiled (1250mm). Therefore in the mortar cradle above the mortar barrel there was a recoil mechanism, consisting of two fluid recoil cylinders and an air-filled return mechanism. The lower part of the mount was fully traversable and at its end, there was a massive recoil brace, bracing the mortar against the ground when firing. The barrel was smooth with a screw breech and plastic seals. The gun could be broken down into two pieces for transport (16 tons each). Only the project was ever developed, but the drawings burned during a factory fire. Before that however, the project was introduced to the Czechoslovak army staff, that was not interested. 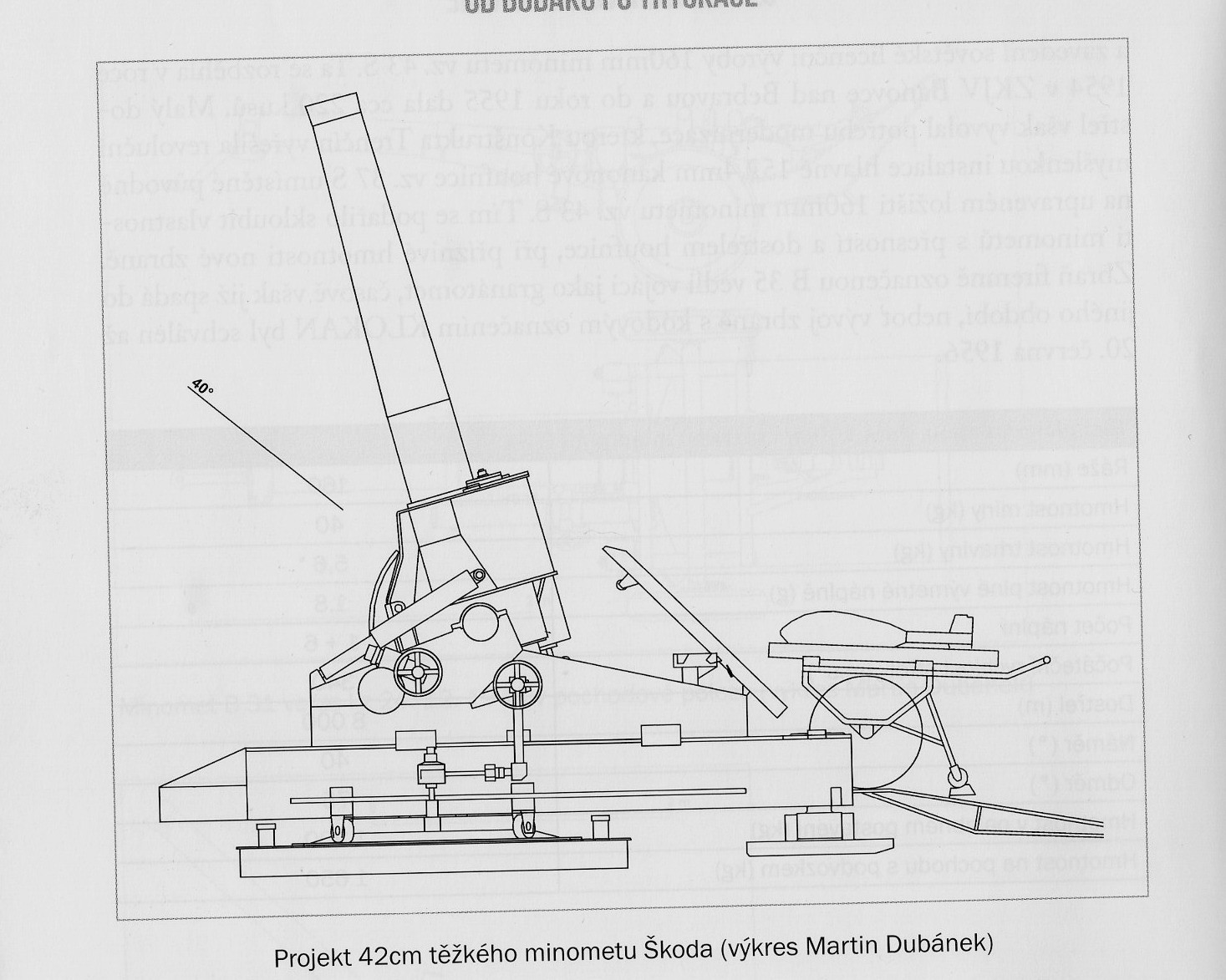 Another mortar (305mm) was designed for the Germans during the war, its designation was B20. In this case, the 850mm recoil was conducted by the barrel only. The mount again had a recoil brace with additional support on the sides. The barrel was smooth and was balanced by a air-powered balancing mechanism (two parts). The recoil mechanism again consisted of two hydraulic cylinders. When elevated to 4 degrees, it could be loaded from the munition cart. Its rate of fire was very slow – 2 rounds in 5 minutes. The time to ready it to fire(or to break it down for transport) was estimated at 20 minutes. For transport, it could have been broken down into two pieces: 8,5 tons (barrel part) and 7,5 tons (lafette). One prototype was build and after the war, it was captured by Americans in Pilsen and moved to America. Two unfinished barrels were left in Škoda though and the mortar was actually assembled and trialed first in May 1948 (unsuccesfully, the breech seal mechanism was being torn apart by the firepower) and then on 31.1. and 1.2.1949 in Hluboká. The original mount was not available and so a new one (from 210mm heavy cannon V3) was used. New recoil brakes were also installed.

The tests were conducted with two types of shells: a light shell (169kg) and a heavy shell (236kg). The 1949 tests actually passed without any significant problems, apart from the elevation mechanism being a bit too difficult (as in heavy) to operate for the crew. A small defect of improper gun balance above 71 degrees of elevation was also discovered. On 31.1.1949, the Ministry of National Defense requested the manufacture of 16 mortars in 1952 and 20 in 1953, the mortar was also developed further in order to export it to USSR. USSR representatives did order one prototype to be tested, but they disliked the recoil compensation mechanism and demanded the mortar to be reworked based on the classic mortar principle – and that’s how the project B32 was born. 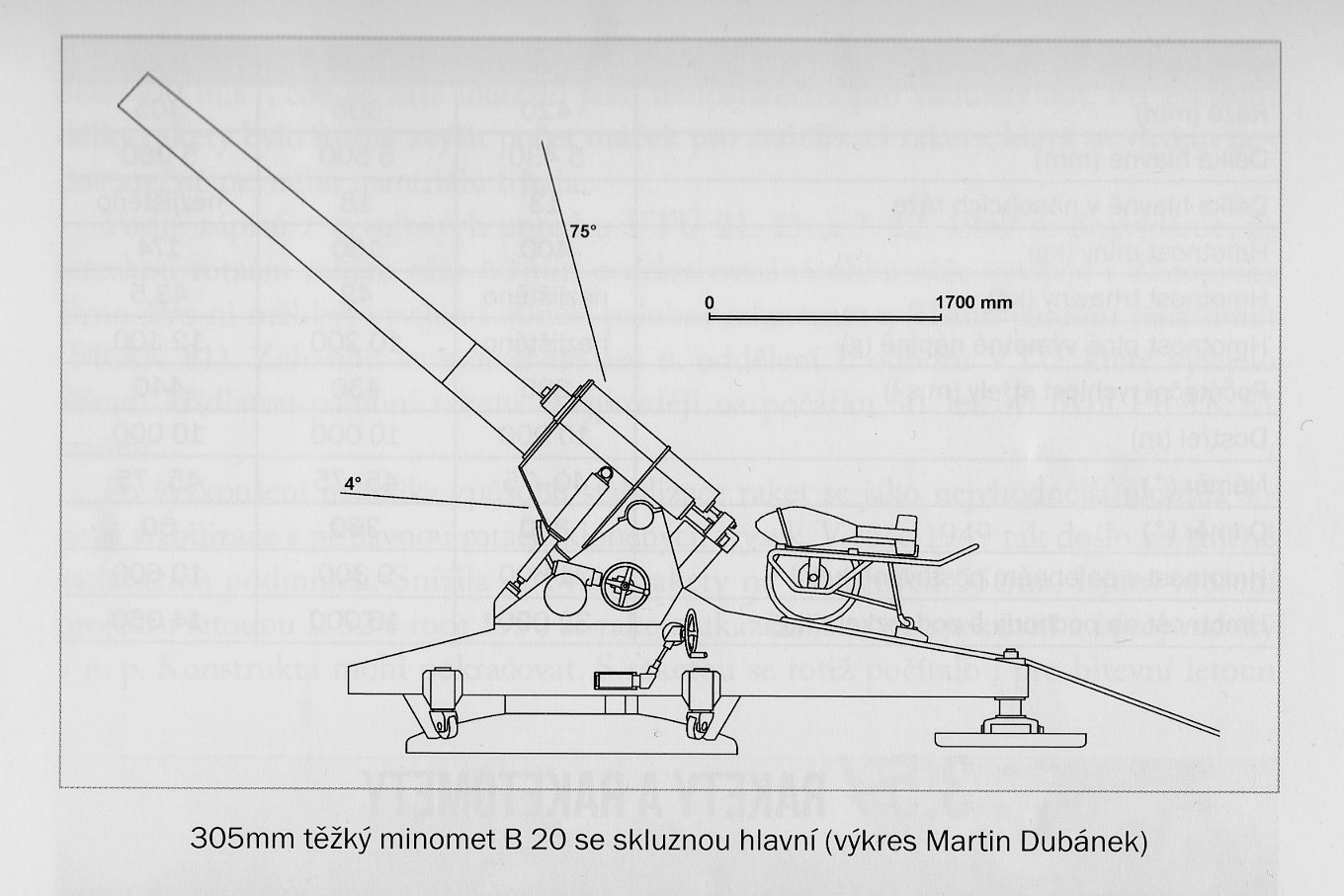 What follows is not a wartime project, but post-war development of the B20. The Soviets demanded the weapon to be reworked to correspond to Soviet mortars, where the energy of the recoil (6kg/cm3) is absorbed by the mount and recoil brace. That’s how the 305mm B32 project was born. According to some technical data from 1958, it took 25 minuts to be prepared for firing (without digging the ditch for the mount) and 20 minutes to break it down again for transport. The rate of fire was also 2 rounds per 5 minutes. This mortar was developed until 1951 or so (causing another mortar project, the 160mm B31 to be delayed), but its final fate is unknown (the project was probably cancelled soon after).