when talking about fake tanks in WoT, there is one more category that has to be remembered: vehicles, that were not fakes and existed (at least in blueprints), but everyone thinks for some reason that they did actually not exist. There is an entire number of this vehicles and today, we are going to focus on them.

One of the most notorious cases of “no way that existed” is the KV-122. Specifically, the KV-1S with an enlarged turret (KV-85) and the 122mm D-25 gun. I mean – it’s way too overpowered, it has to be a fake! Sorry, that one actually really existed: 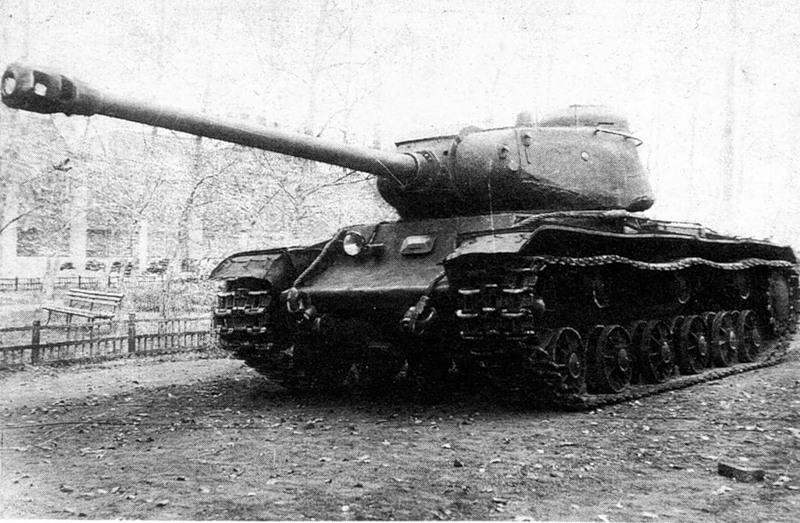 The D-2-5 gun in the game is – as far as I remember – a somewhat re-worked version of the D-25T with the same ballistic properties, only made to fit the IS (KV-85) turret by having a different breech I think. But yes, it existed. Want to hear something even more ridiculous? Some Soviet reports mention an attempt to put the BL-9 on KV chassis. That would be just amazing.

Another “usual fake suspect” is the Jagdpanzer E-100. Yes, such a project really existed. It was a very late project to use the E-100 chassis as a Sturmgeschütz with a massive gun. It’s not specifically mention that this vehicle would actually be a jagdpanzer (tank destroyer), its profile fits the one of an assault gun instead, so it would probably be more reasonable to call it Sturmgeschütz E-100. It was concieved in May 1944, along with the Sturmgeschütz Maus (often referred to – incorrectly – as Jagdmaus, yup, that was real too) with either a 15cm or 17cm gun, they messed around with it and cancelled it around July. Unfortunately, no drawings of mockup photographs survived, so the way it looks in the game is a Wargaming reconstruction, albeit probably the most historical one (weight distribution-wise, rear casemate makes most sense), it was consulted with Mr.Doyle also. What however is NOT historical is the “Krokodil” – that’s some modeller invention. There are a LOT of myths running around about Maus and E-100, if you are interested, check my older article about those too.

MT-25 light tank was actually also real, so was the project to mount the BL-9 gun into IS-3 (I’ve been actually looking into finding some documents on the web about that one, but couldn’t find anything proper – I am pretty sure it was in one of Ensign Expendable’s Soviet QA or on his blog – still, the project gets mentioned by Yuri Pasholok.

What was semi-real was the IS-4 tank with the 122mm M62 gun (or any tank with that gun really). You see, there was no such project “per se”, but the M62 gun was designed to actually replace ALL the D-25 guns, so yes, it is historical. What is even funnier is that they apparently tested the same gun in the IS-2, which would be a pretty hilarious tank in the game. In short: wherever the D-25 fits, the M62 fits too.

As for the rest, what else…

The T110 series existed (although the TD part is messed up in the game) and yes, the Aufklärungspanzer Panther existed too as a proposal (with that tiny stock turret). Both the Waffenträger Rheinmetall-Borsig and the Waffenträger auf Panzer IV are historical projects (both are mentioned by Hilary Doyle, including drawings), GW Panther and GW Tiger also existed, although they weren’t historically named as such (GW Tiger was referred to as Grille 17 or Grille 21).

Well, that’s probably all I can remember at this point.