so, remember that 300 gold for password change event on the RU server from last week? Now we know the reason. Wargaming RU VK page (VK means Vkontakte, it is basically Russian version of Facebook, very popular) reported the following: 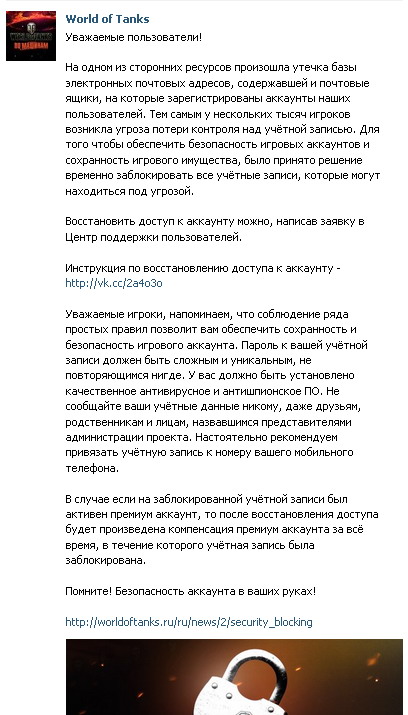 Basically, someone (unnamed third party) got their hands on (probably hacked) WG RU database of several thousand account e-mails and leaked it. These players were immediately threatened by the loss of their account, hence the “change your password for 300g” event.

The accounts that were threatened were temporarily blocked in order to prevent their theft. This resulted in a massive whine on RU forums, because their owners thought they were being banned for no reason (one player from Ukraine even wrote to me to report the issue). For those “banned” this way: you can write a support ticket and get your account restored.

And yes, this has happened before – the first “300g for password change” event some of you might still remember was also a result of an account security breach on RU server.