some of you might remember the Tas – the ultimate Hungarian wartime project of a medium/heavy tank, inspired by the Panther. I wrote about the Tas here, in case you are interested. Either way, sometimes, some “information” appears that Tas was supposed to be equipped with German 88mm gun, like the Tiger. This is not true and Károly “Karika” Németh will explain it in detail. 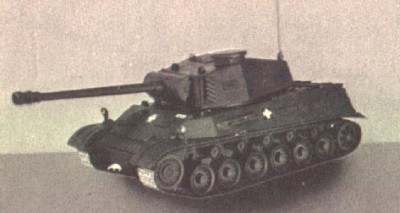 Regarding the picture above, that was claimed to be the 88mm Tas – that’s not the model of the Tas with 88mm gun, there’s NO chance that the Tas could have been mounted with an 88mm, historically.

At first I have to make some things clear: the original plans, blueprints and documantations for the Tas medium tank are mostly missing (lost during the occupation of Hungary by the Germans, and then the Soviets), and the historians have to work with the limited written sources and many (less reliable) personal memoirs/flashbacks. Therefore, a lot of misunderstandings and delusions circulating around on the internet, and even in published books.

There were some discoveries on the topic of Tas tank in the recent years/decade, which are make some older articles/books obsolete, but somehow these new discoveries are not really became the part of the common knowledge yet, not even in Hungary (not to mention in any foreign country). I’ll try to highlight some of these common mistakes here.

In the early 1980′s, engineer Pál Korbuly (son of János Korbuly, one of the “project manager” of the Tas, back in the 1940′s) was the first one, who have tried to collect the fragmentary data about the Tas medium tank. The picture posted is from the book Harckocsik és páncélozott harcjárművek típuskönyve [editor: István Poór]. Budapest, 1980. page 162. It (that model vehicle) was the first attemt to create visual illustration/model for this tank, however, it is based only on written data and collected personal flashbacks (no pictures or blueprints or drawings or anything), so it has many flaws, mostly on the turret. Clearly, it is not the model of the Tas with 88mm cannon (even the book says that it was mounted with a 75mm gun).

In 1992, from collected data of Kobuly, and some photos about the 1:10 rate factory model of the Tas (found in 1982) engineer Iván Bajtos made the (most commonly known) dimensional outline drawings of the Tas, these drawings: 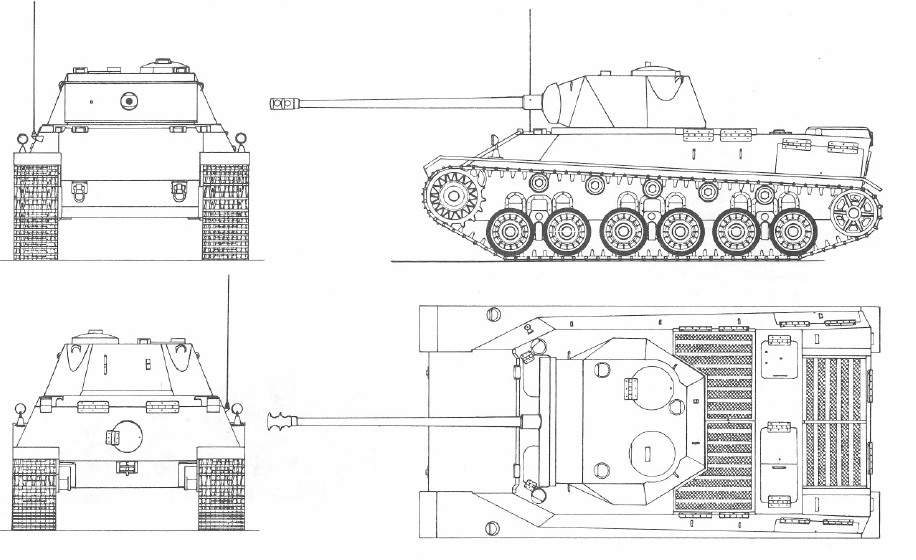 But nowadays it turns out that these drawings aren’t perfect eighter.

The original 1:10 rate factory model has not been found, so most of the exact measures and dimensions of the Tas are not clear, many of them were estimated from these photos: 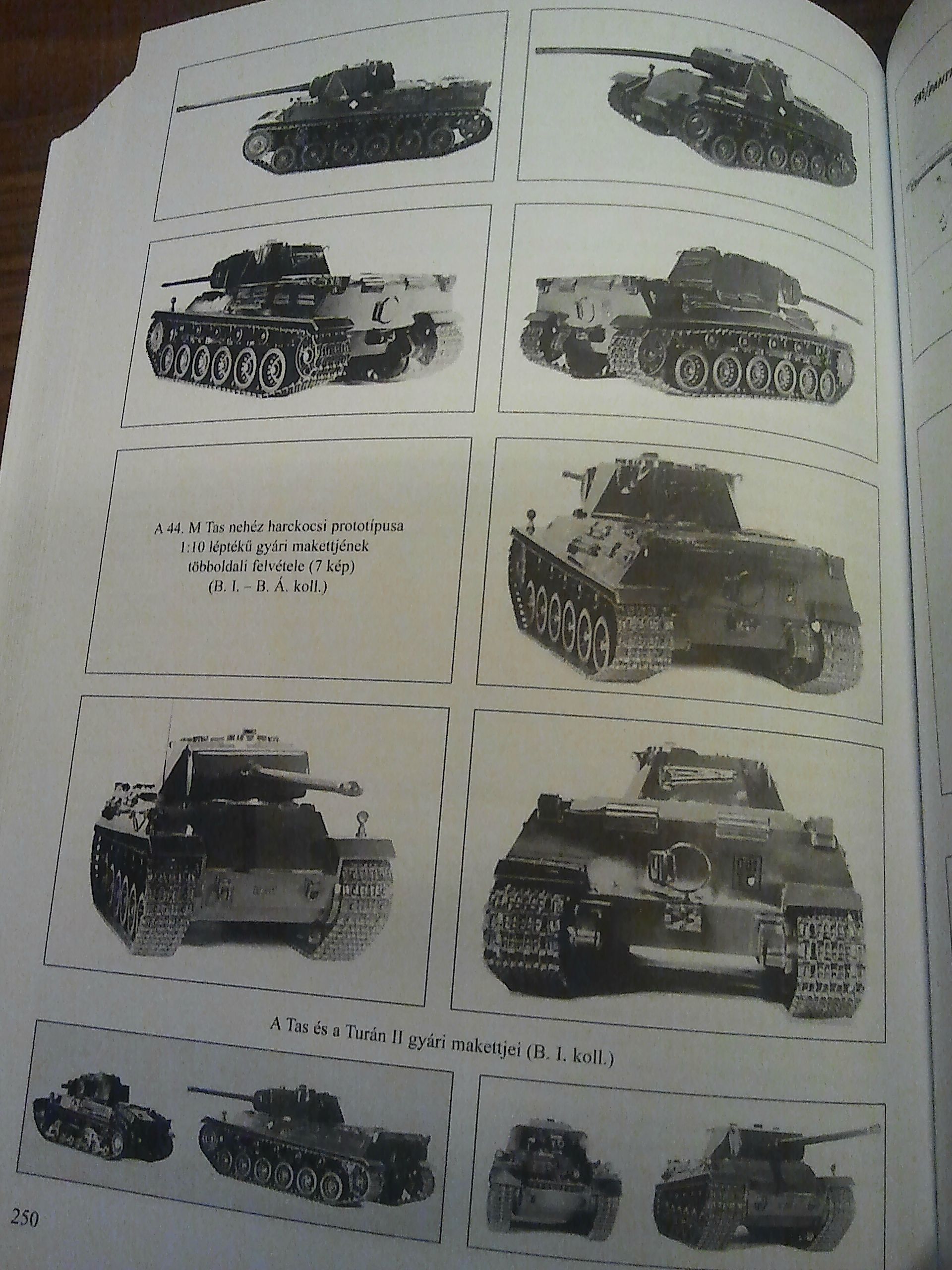 Bajtos thought that the factory model was mounted with the 43.M 75mm L/46 gun (3587mm), what was the only availalbe cannon at that time, because the DIMÁVAG Weapon and Ammunition Factory didn’t made the (modified Bofors) 29/44.M 80mm gun for the Tas on deadline (the mass production of that gun was theoretically postponed to 1945). His measurments were based on that gun’s size.

But later, when the size of the gun of the factory model was measured back, the model’s barrel lenght just didn’t add up, so it became clear, that the model had to be built (according to an earlier plan) with the longer 80mm cannon. However until lately, only the dimensions of the original 29/38.M Bofors/DIMÁVAG 80mm AA gun were known (L/48, 3770mm long, muzzle velocity: 750 m/s), which was never planned to be mounted on the Tas.

In 2009, the description of the modified 29/44.M Bofors/DIMÁVAG 80mm AT/AA gun (L/58, 4585mm long, AP muzzle velocity: 872 m/s) were found, so the dimensions of the factory model, and based on that, the planned Tas’s size could be estimated more accurately. So the based on these new studies it became clear, that the Tas would be somewhat smaller than what Bajtos thought. On bottom of this picture, the bigger drawing is what Bajtos draw, and the smaller is based on the newer studies: 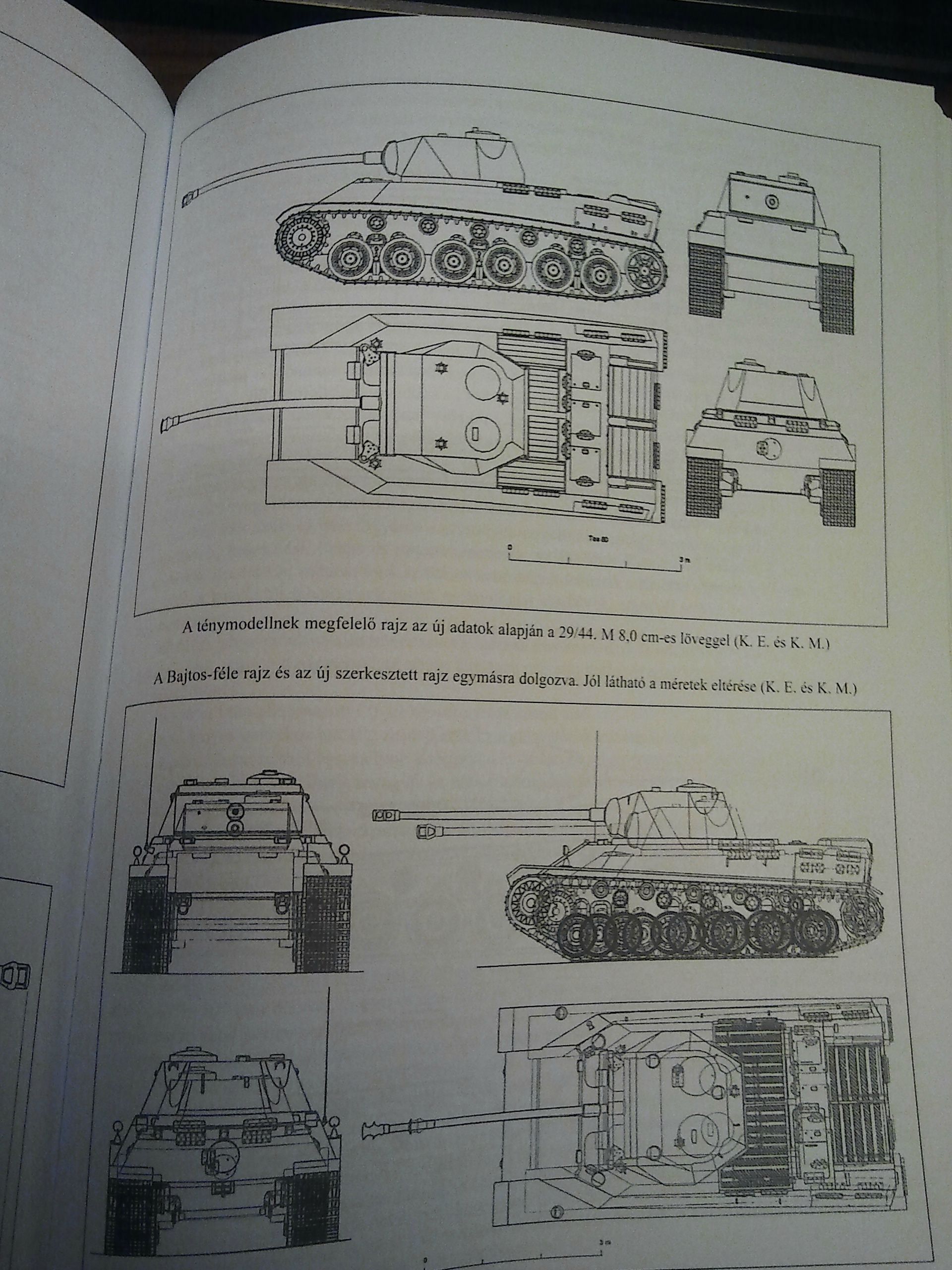 The germans refused to sell any of their high-performance 8,8 cm or 10,5 cm cannons to Hungary. In the first place, that’s why the hungarians started to upgrade their 29/38.M 80mm AA gun, to make it capable to use against advanced aerial targets (B-17s and B-24s), and ground forces.
However, the Hungarian Army got some 8,8cm guns from the second half of 1944, but there were no (known) plans to use them in the development of the Tas medium tank.

Summary: If the prototype Tas would be finished in late 1944, it would be most likely been mounted with the 43.M 75mm gun (the same as the Turán III and the Zrínyi I gun), because the DIMÁVAG factory could start the mass production of the 29/44.M 80mm gun only in 1945. But the factory itself was captured by the Soviets in November 1944, and the assembly line of the WM, and with that, the half-done Tas prototype was destroyed in July 1944, so…

In WoT, the Tas could(!) get the 8,8cm KwK 36 cannon, as it (its PaK version) was available by the Hungarian Army, but it would be very unhistorical.