a very long time ago, I wrote a post about the TNH-57/900 light tank. I recently added some new info I found, so let’s have a look at it. This vehicle could appear in the Czechoslovak light branch around tier 5.

After the war, the newly-reformed Czechoslovak army was not interested too much in new light tanks, even though the LT-38 and Hetzer suspensions were used for the development of other vehicles, such as some self-propelled guns. Several designs were given to consideration in 1948-1949, including the Škoda T-17, but the army really showed no interest. However, Škoda developed the new line of automatic drum-fed cannons – the 37mm A23, the 47mm A24 and the 57mm A25 (the latter two intended also for the T-16 prototype). ČKD thought it would be a great idea to make a new light tank design too – they knew the Czechoslovak army wasn’t really interested and so the design was concieved for export in 1949 and it was designated (in the ČKD light tank tradition) as TNH 57/900, as it was based on the TNH chassis conception and designed so that it could share many parts with the LT-38 and Hetzer. It was to be armed with the 57mm A25 cannon and it was generally a very good design. A technology demonstrator was created and passed the tests (it was made from the last TNH n.A. hull and a wooden mock-up turret), but in 1949, Czechoslovakia was banned from selling any weapons to countries outside of the Soviet sphere of influence (and as the countries within the sphere of Soviet influence were serviced exclusively by Soviets and their tech, it was a de-facto export ban). Losing its primary goal (the export), the project was cancelled in 1950. Oddly enough, the prototype wasn’t scrapped and it was used for towing artillery even around 1957. Without the turret of course. Unfortunately, no photo of the turretted demonstrator survived.

The hull was reworked, using the frontal part of the Jagdpanzer 38t armor (50mm frontal plate). The turret was shown on drawing Zb 6099 P from 13.12.1947. The task was to build a small but relatively heavily armored light tank with decent firepower. The protection was to be ensured by heavily sloped frontal armor (50mm thick), the sides were 30mm thick and the rear was 20mm thick. Turret thickness was the same (50/30/20). The first gun was proposed to be the 47mm A24, later upgraded to 57mm A25, both automatic, linked with a 7-8mm machinegun (second machinegun was planned in the frontal hull – bow machinegun). The gun elevation/depression (for both guns) was -5/+20 (other sources state -5/+25). The vehicle carried 50 rounds for the gun and 3000 rounds for the machinegun.

The turret design was new and larger than its pre-war LT-38 predecessor and was equipped with small commander’s copula. Both the hull and the turret were entirely electrically welded. Two engines were proposed. One was 14,8 liter petrol Praga V8 with light alloy engine block with the output of 250hp at 2500 RPM. Second was a 14,482 liter Tatra V12 diesel with the power output of 210 hp at 2200 RPM. The diesel engine was judged as more economical and suitable.

It had a crew of four (commander, gunner, loader, driver), three in the turret, driver in the hull. The commander also operate the radio. Three man variant was also proposed, but it was generally accepted that the four man variant was much more effective. All in all, the designer team considered the vehicle to be equal in power to a 30-40 ton medium tank.

This is how the 47mm gun and turret looked: 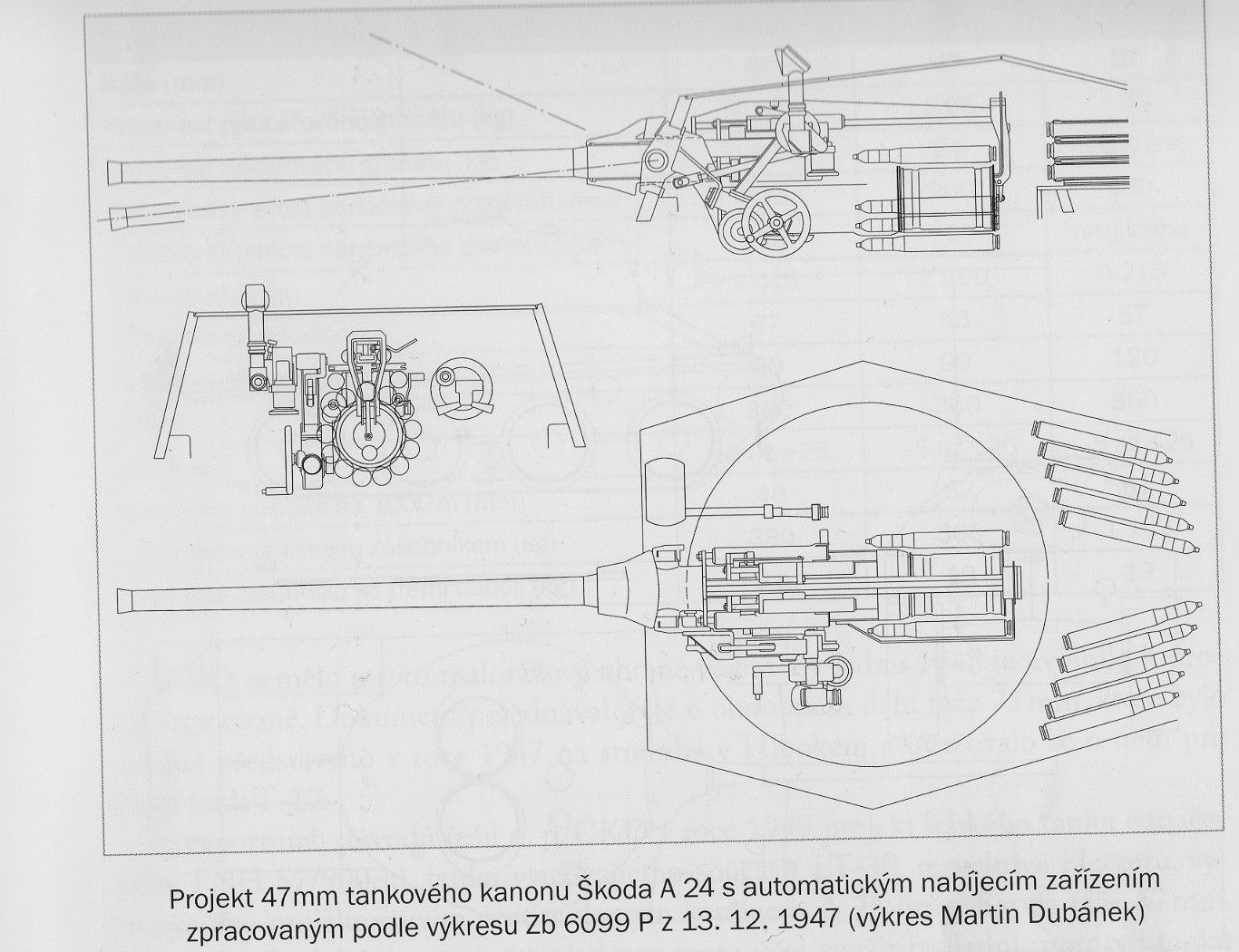 Both guns are automatic with drum loaders (47mm had 13 shells, 57mm unknown number of shells, presumably 9)