now that the fuss about the new graphics is over, we’re going to have a look at the upcoming tier 8 light tank candidate, the T49. 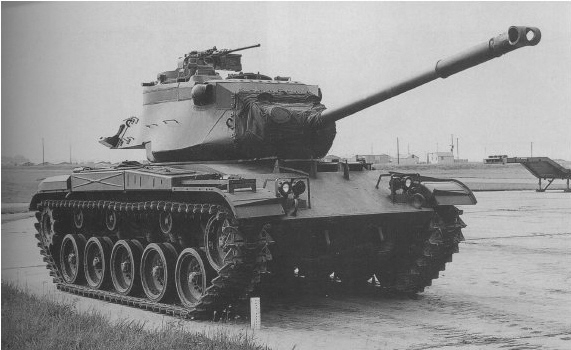 Basically, the T49 was a prototype M41 Walker Bulldog with a 90mm gun (crew of 4). In the late 40′s and early 50′s, it was recognized that a 76mm gun is no longer enough to combat modern Soviet medium tanks, specifically the T-54. And so, in January 1950, a commanding officer of Detroit Arsenal recommended developing a light tank with a 90mm gun, specifically to install a 90mm smoothbore gun on the M41 chassis. This 90mm gun was a new weapon, designated T123. It started as a smoothbore, but after bad tests results, when it came to accuracy, it was modified with shallow rifling, creating the T123E3 gun. Two of these were mounted in the production M41E1 turrets and this combination was redesignated T49. The turret was modified too: it was somewhat higher and it was equipped with a stereoscopic rangefinder. Further modification were made when in the ammo stowage compartment. The gun itself could fire three types of rounds: HE, HEP (HESH) and HEAT rounds.

The two T49′s were sent to Aberdeen, where they were tested between May 1954 and May 1955. The tests of the vehicle were somewhat satisfactory, but the gun still had issues with the ammunition used: specifically the HEAT round was very inaccurate, making the HEP (HESH) round the preferred way to deal with armor. There were some other issues too and as a result, the army lost interest in this vehicle. The prototypes were stored in Aberdeen – I am not sure whether they still exist or were scrapped.

It’s worth noting that the T49 is not the “only” 90mm Walker Bulldog project – Cadillac made a proposal to arm the Walker Bulldog with a 90mm M41 gun from the M48 Patton in November 1958. At this point however, the army was focusing on creating new and superior light tank and so this project never passed beyond the drawing boards.

This vehicle was confirmed by Storm to be the American tier 8 light tank and from what I can gather, it was a good choice, especially given its upgrade possibilities (you’ll like them, trust me). First, some basic overview of the tank. Please note that due to its shallow rifling, the T123E3 gun is actually acceptable for World of Tanks.

As you can imagine, the T49 is not exactly well armored – after all, it’s a light tank. Its armor was made of RHA steel and welded. The turret was cast.

Not exactly a game breaking armor, but solid.

Well, here, we have a bit of a problem. I haven’t found any penetration data on the 90mm T123 (the gun itself is L/50 apparently) and even if there were some available, calculating the HESH effect is always really messy. What we know is that it fired:

What I was able to find out is that based on the US reports, the T108E45 HEAT round was able to penetrate between 349mm and 377mm (depending on charge used) – classic gold round. Other than that, we know that the vehicle carried 46 90mm rounds, the gun elevation was -9,5/+19,5 degrees and it could fire 10 rounds per minute.

Either way, when it comes to the Cadillac proposal to arm the Walker Bulldog with the M41 90mm gun, the gun is actually in the game already (M48′s stock gun), so we know how it would behave in the game:

That however would be unhistorical (although it would probably make a much better stock gun than the quirky T123E3).

The vehicle weighed 24,1 tons and was powered by a Continental AOS-895-3 supercharged V6 engine with the power output of 500 hp, giving it the power-to-weight ration of 20,74 hp/t. Not bad. Its maximum speed was 72 km/h. While the power-to-weight isn’t that awesome for a light tank, it has a potential of being very fast.

I kinda imagine this vehicle in the game as something like current Chaffee. Quite tall, good passive scout, good firepower and hulldown capability, but the agility probably won’t be completely stellar. Sounds like a solid tank for now, right?

That’s right, a tank needs its second turret and more guns. There is but one option in this case: 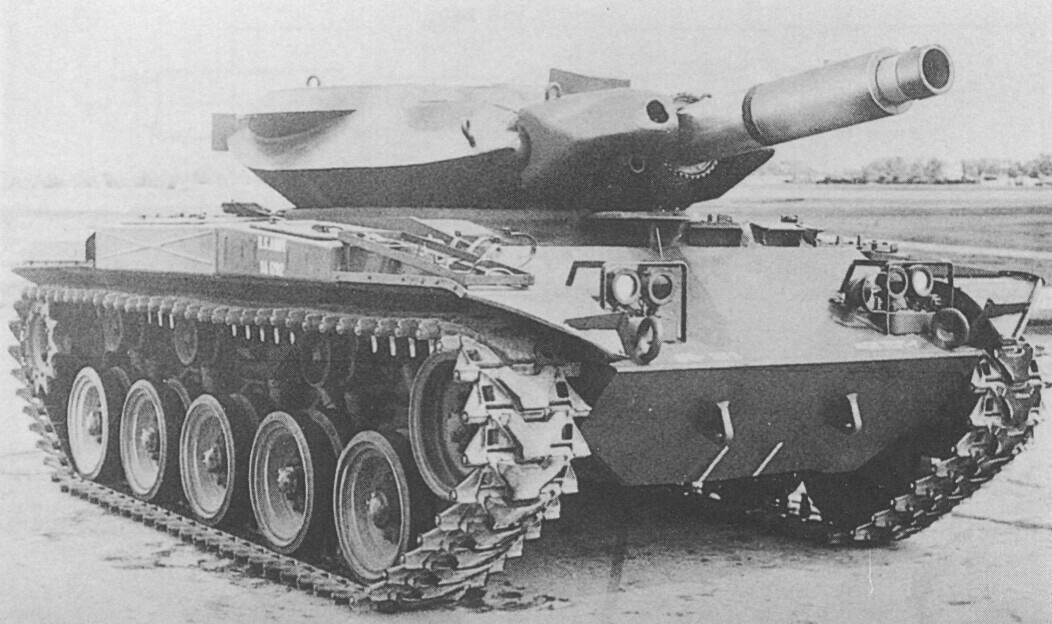 You are looking at the XM551 (prototype Sheridan) turret mounted on a M41 chassis. Very little is known about it other than in July 1962, XM551 test bed turret was mounted on the M41 chassis for the evaluation of firepower and tests. These tests took place in Aberdeen – they started on 23.8.1962, with 590 rounds being fired from the 152mm gun-launcher.

Now, you might say: “But Silentstalker, how is this possible, SerB said ‘no rocket launchers in WoT!’ and this gun fired the Shillelagh missiles!” – well, there is a trick around that. You see, by the time this test bed was built, the Shillelagh missile was not yet developed, so in this case, the gun is really just a 152mm gun.

Considering how little is known about this vehicle, its parameters will be mostly speculative. Most people are probably interested in the 152mm XM81 gun-launcher. Basically, it’s a big HEAT lobber. It’s main round is the XM409 HEAT round, weighing 22,6 kg. It had the muzzle velocity of 689 m/s and it was capable of penetrating 177mm at 60 degrees (in WoT terms it’s like 205 PEN I think). Other than that, it can fire a HE round too (M657, 23,4kg). An APFSDS round was also developed for the 152mm gun, but that is way beyond WoT timeframe and had nothing to do with the project. In the Sheridan turret, it would have the elevation of -10 to +20 and could fire 4 rounds per minute. Prototype Sheridans (XM551 pilots) carried 20 rounds of 152mm ammunition.

As for the turret itself, it was made from steel (only the Sheridan hull was aluminium!), so no problem there, unfortunately I haven’t been able to find any actual turret armor thickness values. Not even Hunnicutt has them, strangely enough. It’s reasonable to assume that the Sheridan turret armor is quite thin though, around 30mm.

Well, there you have it.