what we have here is a quite interesting thing. Some of you (with very good memory) might remember one interview with SerB for the Goha.ru portal from more than two years ago (you can check it here), where – while discussing potential light tanks – he mentioned an ultra-lightweight variant of the T-54 tank a potential hightier candidate for World of Tanks. I’ve seen this interview before several times, but I honestly never found anything about this special T-54 variant, until it showed up on US forums today. It’s pretty interesting actually. Here’s what we know about it.

The article states that there was some testing of various types of tracks for T-54 tanks around 1949. At the same time, in May 1945, the design bureau of Plant No.183 (Kharkov) designed a light variant of the T-54 tank with improved terrain passability compared to the production T-54 model. This light variant could serve during special operations, where passability, speed and agility were needed more than superior armor protection. In order to achieve that, this light variant had wider tracks (580mm).

Both tanks were to use the same components, so the lighter variant could be easily produced by the plant in parallel with the original vehicle. The only things different were the hull and the turret, both having reduced level of protection, but kept the original shape (armor angles and such) of the production model. Final drives were also subjected to some small technical changes.

This is how they planned the vehicle to look from front: 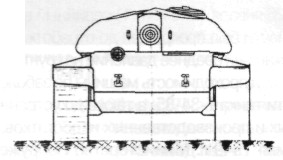 Armor schematics of the light vehicle (1949):

The armor was changed as such:

The suspension was slightly changed. Original T-54 suspension on the right, lighter on the left: 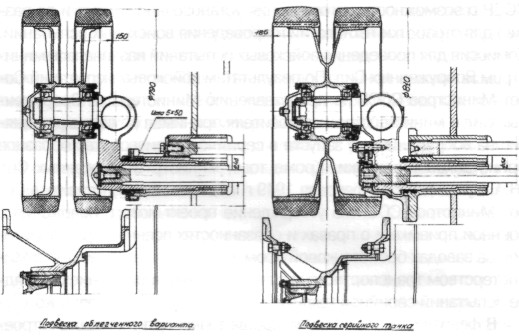 This vehicle was, according to its designers, to solve tactical problems where using regular T-54 tanks was not practical. Note that the Chinese actually went even further and reduced not only the armor, but also the size of the original tanks, creating the Type 62 by miniaturizing Type 59. That happened of course more than a decade later. Apparently, this project never progressed past the drawing board stage.

So, what do you think? Could this be the tier 8 Soviet light tank? 175mm penetration gun sounds sufficient, maybe the armor would be a bit OP…