about a year ago, I was writing the series about potential Czechoslovak tree, I noticed (first from Tuccy’s work, then after reading up stuff on my own) that Czechoslovak tree would have a serious problem with hightier tank destroyers and heavies. The result was, in the early proposal, I did cut off the TD branch at tier 6 or so and did let it be.

But, would it be possible to prolong the Czechoslovak TD branch to tier 10, contrary to what I thought earlier? Well, I think so. Here’s how I think the tier 10 vehicle would look. 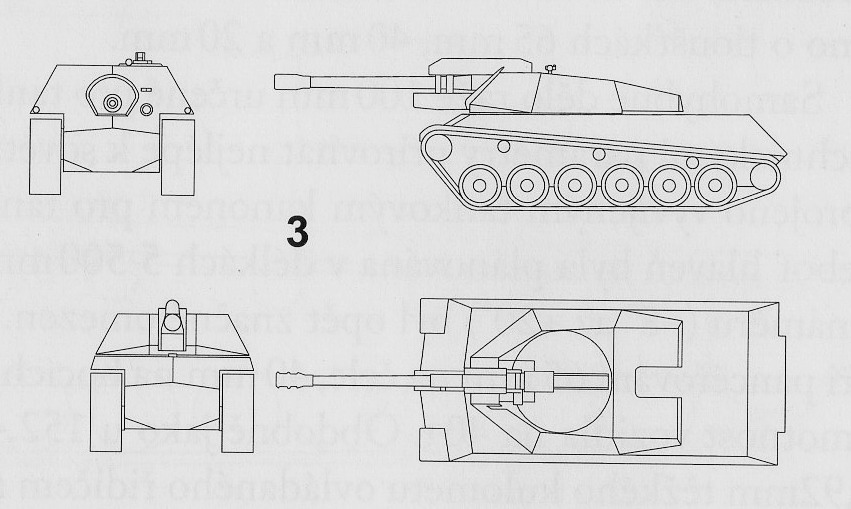 A little bit of history first. From 18.11.1948 to 20.11.1948, a meeting was held at the Škoda facilities, where the Czechoslovak army representatives requested new designs for self-propelled guns, both as tank destroyers and as artillery vehicles. The result was the decision to develop two platforms for the SPG’s (for a tank destroyer, SPG and AA role): the LP platform (light, based on the T-17 light tank Škoda design) and the TVP platform (for medium and heavy vehicles).

The result of this meeting was a demand for nine separate vehicles, which was considered completely ridiculous. However, Škoda tried to comply and by 15.2.1949, they had the preliminary study prepared. Now, I won’t go into the details of each and every vehicle obviously, but what I will do is describe the artillery command proposal for the “Hellcat” type vehicle.

As mentioned, this vehicle was proposed as a response to the artillery command. It was to weigh 32,6 tons and was equipped with a 152,4mm gun in a fully rotating turret. It was to carry 50 152mm shells and its elevation would be -5/+70 degrees. The vehicle had extremely thin armor (20mm). An alternative proposal was also created by Škoda – this time, the weapon (on the same hull) would be the 100mm A20 (roughly a Czech equivalent to the 100mm D-10 gun). The vehicle would be powered by a 983hp Škoda AHK (or ČKD AHX) V16 engine, giving it the power-to-weight ratio of 30 hp/ton. Maximum speed is unknown, but using the data from the TVP itself, which was 8 tons heavier and was projected to go as fast as 60 km/h, 60 km/h or more sounds quite realistic.

The proposal was considered until like April-May 1949, when it was cancelled in favour of a re-worked TVP TD project, resembling the “Nashorn” (which in turn got cancelled soon afterwards).

Now, I am sure you can see where this is going. What we have here is a potential tier 10 Hellcat with paper armor, but absolutely insane mobility and two historical gun options. One was the 100mm A20, the other an unspecified 152,4mm gun. We know the gun was supposed to be of an indigenous design, firing 43,5kg shells at 675 m/s. However, as I said, the design was not specified, that’s why we can add

This is a Czechoslovak 152mm L/56,3 heavy cannon, developed by Škoda from September 1948. It had a screw breech and could fire a 52kg AP shell, capable of penetrating 200mm (30 degrees) at 1000m, or a 52kg HE shell with S90 mechanical fuse. It used two-piece ammunition with three charges available (one for 925m/s, one for 730m/s and one for 600m/s). As many other Czechoslovak arms projects, this one was cancelled in 1952 in favor of Czechoslovakia purchasing Soviet 152mm gun.

Now, I checked the recoil and size, it could fit the TVP-ST mount. In WoT terms, we are looking at a gun with 240-250mm penetration. In 1950, the development was transferred to Slovakia and a Soviet “advisor” got involved as well – this all hints at the fact that the gun was designed (as everything at that point) with compatibility with Soviet tech in mind. That in turn means it could fire the Soviet 152mm HEAT shells (check Soviet tier 9 and 10 152mm HEAT for reference). The original mount elevation was -5/+45.

With excellent camouflage, I believe this vehicle could be pretty viable, just as the Hellcat is now, without excessive armor. If this works as tier 10, the rest of the branch would be pretty easy to put together.