the Jagdpanzer 38(t), (incorrectly) known as the “Hetzer”, was one of the few late-war vehicles, supplied to Germany’s allies. However, due to its late introduction, this tank destroyer was actually officially supplied to only one foreign ally of Germany: Hungary. The reason for Germans allowing the export was that Hungarian industry was unable to produce this type of vehicles (a tank destroyer) in sufficient numbers, although there were attemtps to arm the Honvéd (Hungarian army) with an indigenous version of the Sturmgeschütz (Zrínyi self-propelled guns).

First 10 Jagdpanzer 38(t)’s were shipped to Hungary in August 1944 and they were assigned to the 1st Cavalry Division (Lovashadosztály), that was recovering and was being reorganized after staggering defeat in the east near Warsaw. Here, it took part (attached to the IV. SS Panzerkorps) in the suppression of the Warsaw uprising (successfully). 50 more vehicles were supplied in December 1944 (25 on 9.12.1944, 25 more on 12.12.1944) and – finally – last 25 on 13.1.1945 (85 Jagdpanzer 38(t)’s altogether). They were assigned to 3 units (16., 20. and 25. mechanized divisions – rohamtüzér osztály), with the 20th being attached to the 25th Infantry Division (led by col.Kalko – the designation of these vehicles started with K) and the 25th being attached to 20th Infantry Division (led by major-general Tilger – the designation of these vehicles started with T). Both these units participated in the last great offensive (codename “Frühlingserwachen” – spring awakening) in March 1945. These vehicles carried the numbers T-01 to T-040 and K-041 to K-075. Several vehicles were also attached to the elite Szent László division. On 8.3., the 20th Eger group reported to have 15 Jagdpanzer 38(t)’s in its ranks.

Here, we can see the Jagdpanzer 38(t) from the 25th Mechanized Division. Notice the camo pattern, that is very similiar to the pre-war and wartime Czechoslovak vehicle pattern and was most likely applied by the producer of these vehicles (Škoda).

Here, we can see the Jagdpanzer 38(t) from the same unit apparently. Note the “Marika” nickname on the front hull, the praxis of assigning female names to vehicles was not uncommon in the Hungarian army. 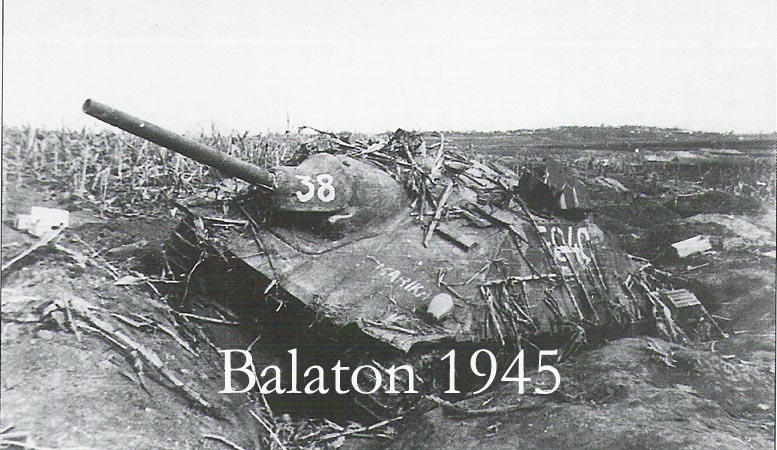 Second “official” wartime user was the Russian 1st Division of RLA (Russian Liberation Army – a unit composed of Russian ex-soldiers and POW’s, fighting against Soviet Union in German service), also known as 600th Infanterie-Division, or “Vlasov’s Army”. In late March and early April 1945, the unit recieved 10 Jagdpanzers and 1 Bergepanzer 38(t). In the beginning of May 1945, this unit found itself near Prague in Czechoslovakia with its main objective to drive west and to surrender to American troops (they knew full-well that Soviets would have them executed as traitors). At that point, the RLA communication basically broke down and without the knowledge of its high command, the 1st Division effectively joined the Czechoslovak rebels in fighting the SS troops (although there were incidents where the RLA fought the Czechoslovak rebels as well). The Jagdpanzers did take part in the fighting (for example during the clash near Ruzyně airfield). Their fate however was not an easy one. In mid-May, they managed to get to the American side, but the Americans (despite the undeniable RLA contribution to the liberation of Prague) refused to accept their surrender (contrary to preliminary agreements). Those men, who were captured by the Americans, were turned over to the Soviets. The rest of the unit was later captured by the Soviets as well and most of them were either executed, or sent to gulag. 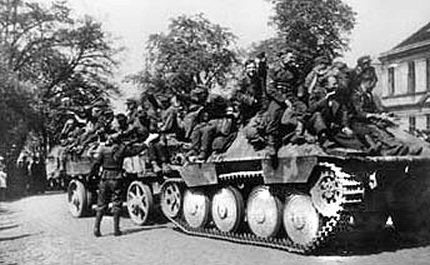 The following picture shows one of the Hetzers, that participated in the Prague fighting on German side on 9.5.1945. It belonged to the combat group Milovice (Kampfgruppe Milowitz) and on 9.5.1945 in the morning hours, it was abandoned by its crew on the Francouzská street. Note the different mantlet shape from serial vehicles – this was one of the first three Jagdpanzer 38(t)’s built. It was used on Milovice proving grounds for training tank destroyer crews. It was abandoned, because when it tried to scale a barricade, one of its roadwheels fell off, probably due to wear and tear from constant use. Notice the German-pattern camouflage.

After the war, Škoda continued to produce the 38(t), first as the ST-I (and ST-III trainer, ST-II was the Czech designation for Marder III), then it got redesignated to Sh PTK 75 mm vz. 39/44 and finally, in 1951, it got redesignated to SD-75/39-44 (ST means “stíhač tanků” – tank destroyer, Sh PTK means “samohybný protitankový kanon” – self-propelled AT gun and SD means “samohybné dělo” – self-propelled gun) and it remained in Czech service for a while (there were several subtypes – due to the lack of the original armament (75mm PaK 39), most post-war vehicles were produced with the 75mm StuK 40, you can recognize those by their muzzle brake, some vehicles even used the Starr mount, but those were converted to the regular mount quite soon). Some of the “newly-produced” 38(t)’s were simply refitted wartime vehicles, others were really made from scratch. These vehicles served in the Czechoslovak army until early 60′s and remained in reserves even longer. All in all, 150 of them were made post-war (not including the refitted vehicles).

There were two larger 38(t) post-war exports by Škoda. The first and best-known one is the G13 version for Switzerland. It was equipped with the 75mm StuK 40 and the engine was switched for Saurer-Arbon, otherwise it had only a few minor modifications. Between 1946 and 1950, 158 vehicles were exported and remained in Swiss service until the 70′s, when they were declared obsolete. Many G13 tank destroyers found their way in private hands and were converted back to look like the German “Hetzers”. Practically all “Hetzers” in existence today are post-war G13 conversions (usually the muzzle brake gets removed to get the “PaK look”).

The second export batch went to Africa – Guinea, to be exact. 3 vehicles were given as a gift to the Guineans in 1959 and 8 more were sold in 1961, along with spare parts and repair kits.