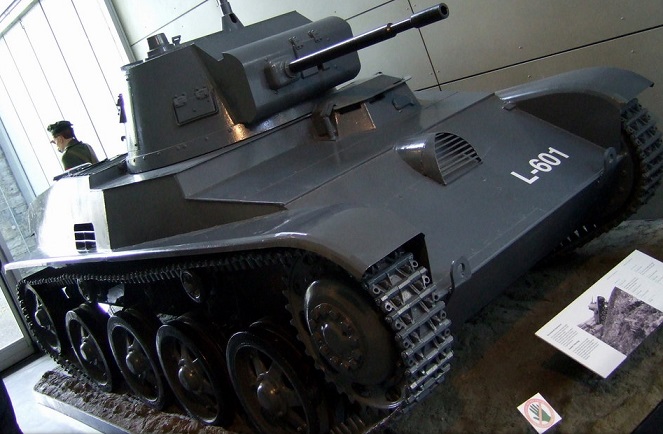 The story of the L-60 begins in 1934, when Landsverk was contacted by the Irish Ministry of Defence, that took notice of their advanced tank designs. Soon, it was decided, that Landsverk would produce two prototypes of their most advanced tank yet.

This new tank design was called L-60. It was further development of their previous L-10 design, but was smaller and it incorporated what experience Landsverk gained during the Swedish tests of the Strv m/31. It was armed with a 20mm autocannon and a 8mm machinegun in fully traverseable turret. The tank’s hull and turret was fully welded and equipped with state-of-the-art optics – in fact, it was one of the most modern designs in the world at that time, using in full the important lessons, learned from the Swedish trials L-10 trials.

First, the rear mounted transmission got moved to the front to resolve the problem with track tension, caused by the rear-mounted transmission on the L-10. Second, the unreliable spring suspension got replaced with a newly developed torsion bar suspension, this is one of the first times (if not the first) it has ever been fitted to a tank. 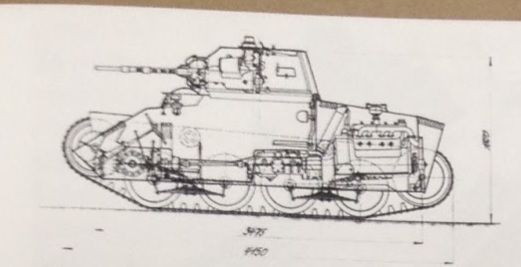 The first prototype was finished just a year after – in 1935 – and soon it attracted the attention of Switzerland, leading to the order of six L-60 and L-120 tanks. This however led nowhere, as Switzerland decided to buy the Czech TNH instead. In late 1935, an Irish committee came to Landsverk to check on the progress on the prototypes, but during the visit, because if a driver error, one of the prototypes backfired and burned out, despite best efforts to put the fire out. Landsverk offered to produce third prototype as soon as possible, but as a result, only one L-60 got shipped to Ireland in 1935. 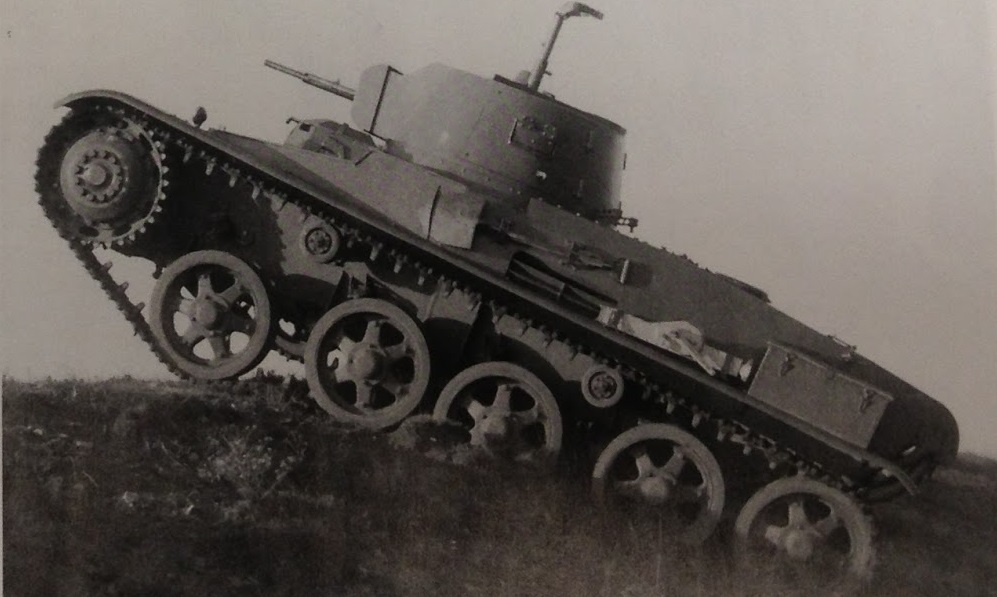 In 1935, one of the Irish tanks was also shown to Swedish delegation. The tank soon became the preferred alternative for a new tank to other designs, such the British Vickers 6 ton and the Czech TNH. Soon after, the tank was redesigned to Swedish standards. Swedish engine was put in, new bigger turret with a radio was installed as well and a new 37mm Bofors gun was also implemented. In 1936, two Swedish prototypes were ordered – one complete and one hull for trials. At the same time, Austria ordered one prototype for evaluation. Austria ended up not buying the tank – instead, the austrian prototype was sent to Hungary. In Hungary, the tank (as well as the L-62 (SPAAG based on the L-60 chassis)) are evaluated and after comparative trials with the Strussler V4, the design was chosen for licensed production, which started in 1940. The L-60 and L-120 got also shown during a Polish visit to Landsverk in 1937, but nothing came of it. 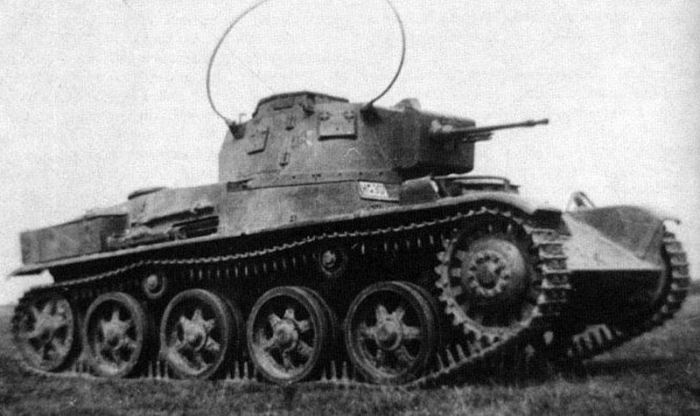 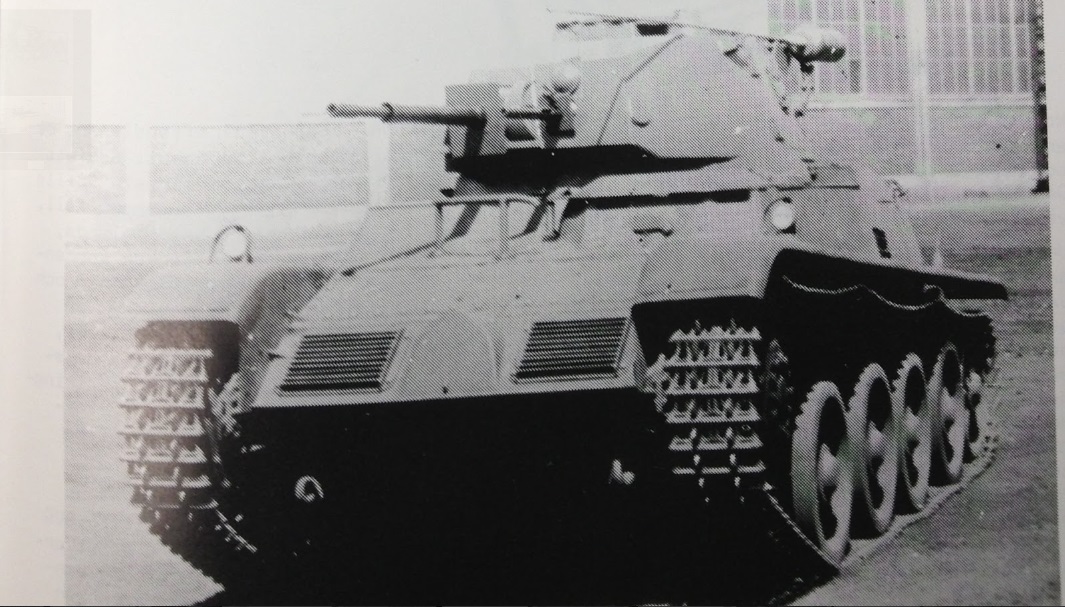 By 1937, the Swedish prototypes were finished and not long after, a modified version is ordered into production under the designation of Strv m/38, with Lansverk designation “L-60-S”. In total, 16 tanks were delivered from 1938-1939, one of which was a prototype, rebuilt to production specifications. The tank was relatively modern for 1938 with its 15mm of armour and 37mm gun, but in 1939, World War Two breaks out and it became apparent that the design was quickly becoming obsolete. 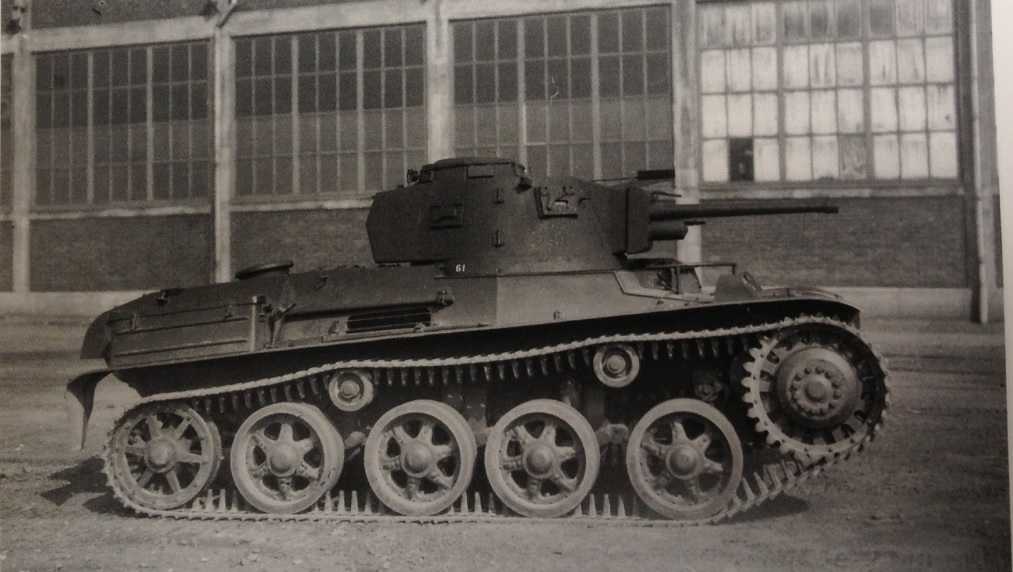 In 1939, after the annexation of Czechoslovakia, it became clear that more tanks were needed. Therefore, second production run of tanks was ordered. Despite the demands for increased armour protection, the new model of the tank went in production without much improvement due to its fragile suspension. The main change on this new model was the new turret, which had sloped frontal armor. The tanks were seriously delayed by the failure of Bofors to produce enough 37mm guns. The tank was designated as Strv m/39, with the Lansverk designation of “L-60-S II”. A total of 20 of these tanks were made from 1939 to 1941. By this time however, it was absolutely clear that the armour was completely irrelevant and after a lot of arguing, Landsverk agreed to finally increase the armor of the tank, but only using additional applique armor kits. 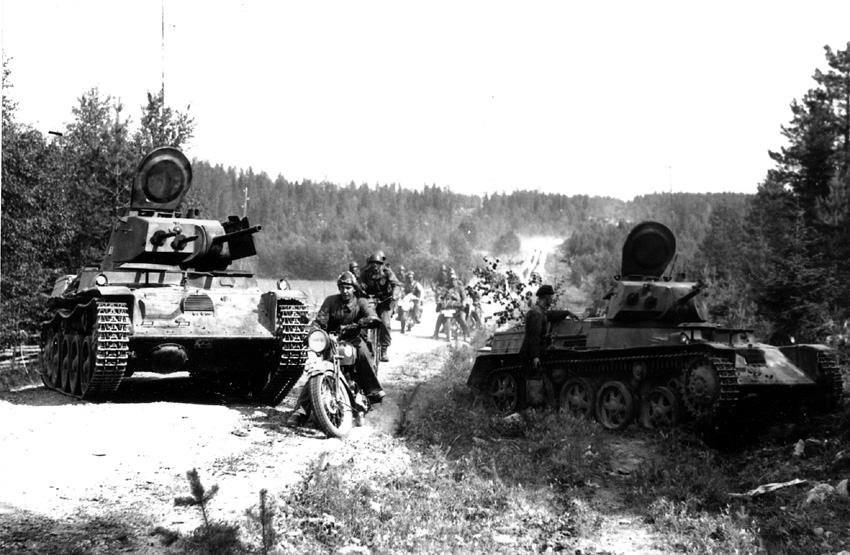 Sweden was now in really bad situation. Its neighbor, Finland was already involved in its war with the Russians and in 1940, the other neighbor, Norway got invaded by the Germans. To top it all, the previously ordered 90 Czech TNH tanks (the order was made before the invasion of 1939) were now cancelled by the Germans, who seized the tanks for their own army. This meant that Sweden was cut off from the outside world and would have to rely on its own tank designs. Therefore, the L-60 was modified once again, this time with mass production in mind. The tank was largely the same as the L-60-SII, but was now equipped with an automatic gearbox, some vehicles could even mount a mortar on the back for infantry support in addition to the applique armor, but mainly the tank was simplified for mass production. The vehicle was designated Strv m/40L (“L-60-S III” by Landsverk). A total of 100 tanks of this type were produced between 1941 and 1942. 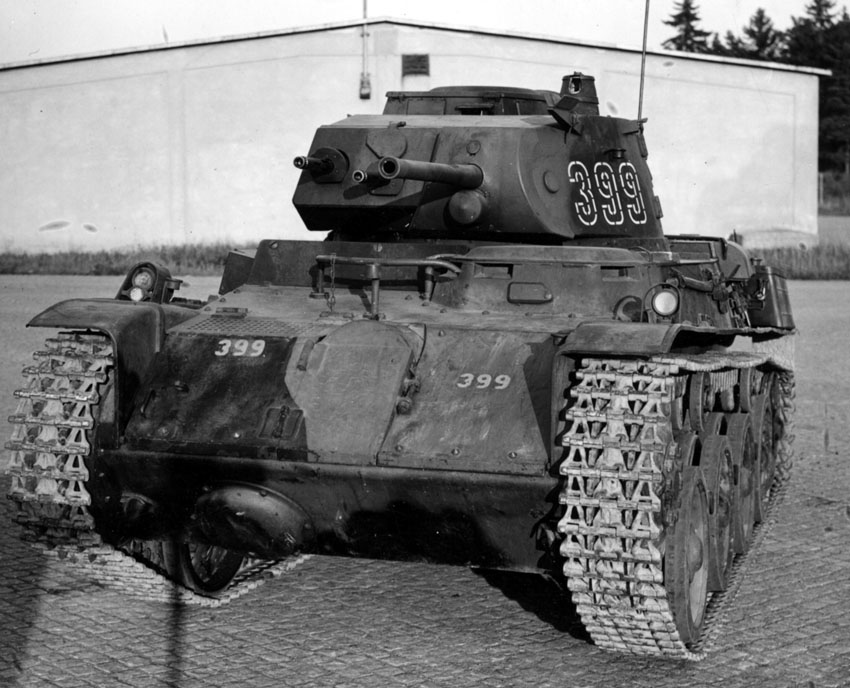 And its armor schematics 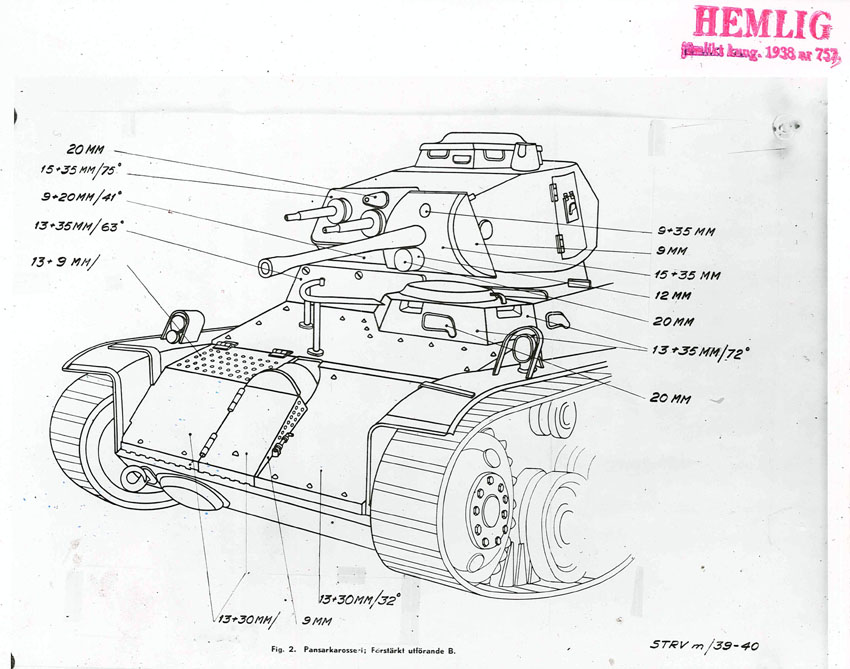 By 1943, Landsverk started to produce a heavier tank design and no longer had the capacity to produce the L-60 series of tanks, so instead, their production shifted to Karlstad Mekaniska Werkstad. The L-60 design recieved another overhaul and the suspension was finaly improved to the point where the applique armour could be built in from the start. Other than that, new, more powerful engine was fitted, the result of which was making the vehicle longer. This tank model was designated Strv m/40K by the army (and L-60-SV by Landsverk). An interesting thing to note is that there is no information on the previous L-60-S IV design, other than it weighed 12 tones and had the same armament as well as an unknown 180hp engine. Anyhow, 80 Strv m/40K tanks were produced between 1943 and 1944 and this was the final version of the L-60 to be produced during the war. 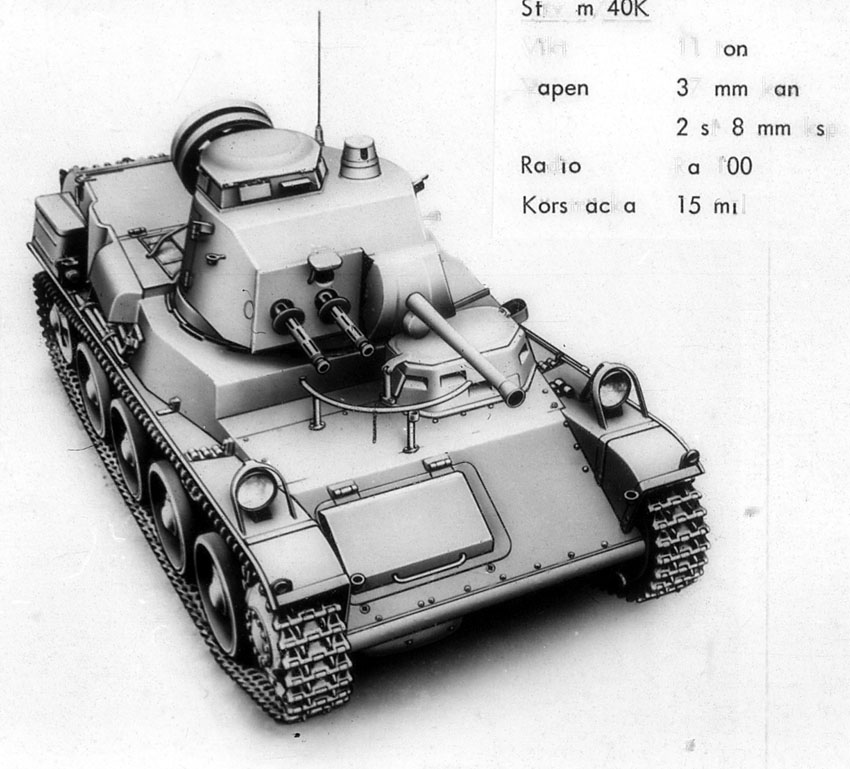 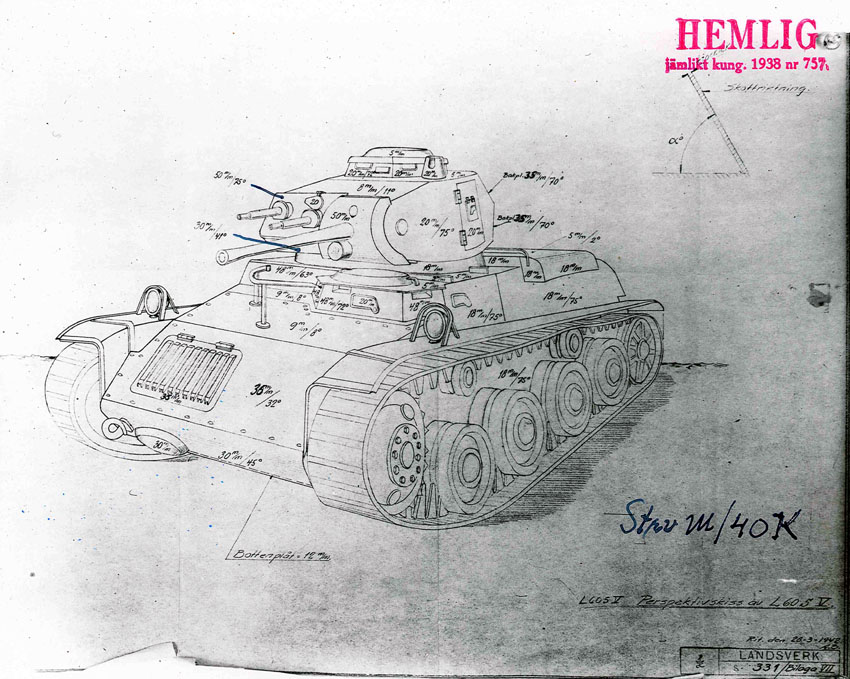 After the war, some models of the tank wer still in active service during the 50′s, there were even plans to re-equip the tanks with a new turret with a 57mm gun. The idea was kicked around since 1944, but the first prototype was only ready by 1949-1950. The prototype hull was that of the Strv m/40L and the turret mounted the 5,7cm Pvkan m/43 gun. The vehicle was designated Pvkv IV “Värjan” (Pvkv meaning “tank destroyer 4″, it was named “Värjan” after some kind of sword, used by the Swedish Carolean army in 16th century). The new turret and the gun increased the weight by 500kg, but this was compensated by the removal of the applique armour. The turret was poorly armored to keep the weight down, with a 20mm gun mantlet and 12mm of armor everywhere else. The trials of the prototype showed that there were big problems with the aiming system and the project was discontinued. 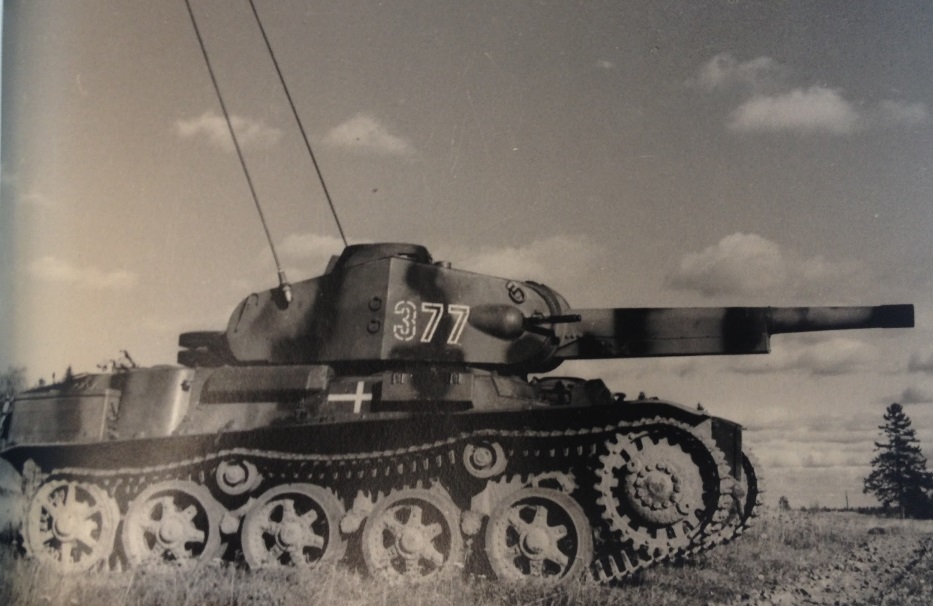 The last model of the L-60 to serve with the Swedish army was the Strv m/40K, which was retired in 1957. However, a few years later, 25 Strv m/40′s were sold to Dominican Republic. There, some of them would serve until the 1990s! In fact, three of these tanks were lost while fighting the American marine corps, one was even destroyed by a M48 Patton. 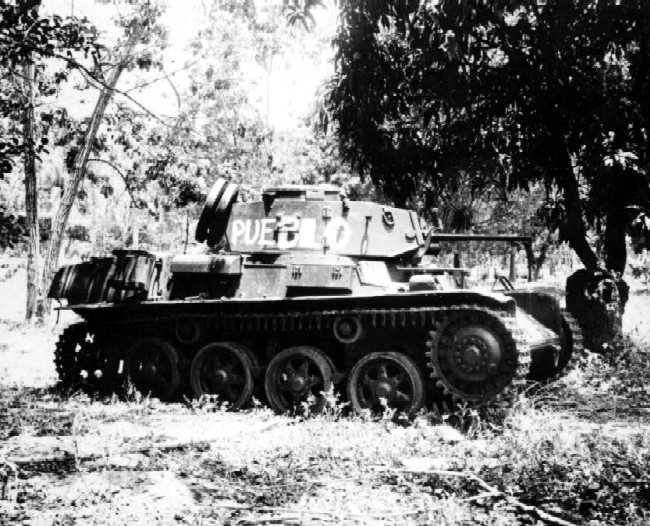 Several models of the L-60 could fit in WoT and could work on different tiers. The main problem with them is that we only have 3 historical armament options for these tanks, which would mean that we would probably have to include some unhistorical guns. I personally think that the Strv m/38 and m/39 should be combined on tier 2, with some upgrades from the L-60 prototype. These would be followed by the Strv m/40K on tier 3, which would then lead to the swedish medium tank branch, starting from tier 4.

Note: L-60 is on display in Collin Barracks Museum in Dublin