Everyone remembers the Porsche VK.45.01(P) Type 101 and its failure to win a production contract against Henschel’s VK.45.01(H) c10. But there was another Porsche VK.45.01(P) in the early conception and design of the Tiger I tank. One, that did in fact make it to the prototype stage – the Type 102.

Early on in the development of heavy and super-heavy tanks, in competition with the Henschel organization, doubts were expressed from the Porsche company on the suitability and reliability of mechanical transmission. With that concern in mind, the Porsche company began to look into engineering an alternative. The concern with mechanical drives was not unfounded at the time, as it was a serious concern for any would-be designer. As if to reassure the Porsche company, Char 2C(1920), B1(1935) and B1-Bis(1937) also incorporated the gas-electric design with mechanical designs, at the time being limited to about 25-30 tons. And so Porsche produced their Type 100 (VK.30.01(P) “Leopard”) and Type 101 gas-electric tanks.

But not being completely sure of the gas-electric design, the Porsche company turned to an alternative design, one that many had previously tried and failed due to technical limitations of the day, the hydraulic transmission. This had actually been tested on the Mark II series tank, fitted with hydraulic transmission, designed by Williams-Janney back in 1916, when the British had what amounted to an open competition to find better way to transfer power from the engines to the tracks in preparation for the mass production of the Mark IV tank. 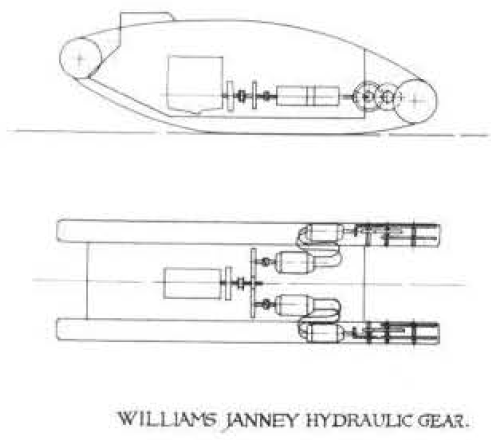 The Williams-Janney design had a conventional 105hp engine, that drove a pair of hydraulic pumps though a four to one reduction gearbox. These were connected by pipes to a pair of hydraulic motors in the track frames, that were linked to the drive sprockets by means of bevel gears. Speed was infinitely variable up to about 4 mph and was achieved by altering the angle of the swash(vanes) plates in the pumps. Steering was effected by altering the stroke of the two pumps relative to one another.

The biggest downside of the design was that the radiators used to cool the hydraulic fluid – they made the temperature inside the tank extremely high and were exposed to enemy fire. Apart from that, the design of the Mark IV would have required a major redesign to accommodate the cooling radiators and to give them armor protection, as they could be easily damaged. The hydraulic design in the end was set aside and considered an alternative option for a future project, but nothing would come of it.

Contracts for the components, turrets and 8,8cm guns for the VK.45.01(P) were issued in July 1941. But there is little of note that occurred between July 1941 and March 1942 other than the first Type 101/1 engine failed on the test stand in December 1941 due to the oil frothing in the crankcase and the engine losing lubrication.

The Type 102 comes into existence at a meeting in Stuttgart on March 23rd 1942, when Porsche informed Krupp that half of the VK.45.01(P) hulls were to be configured for fitting hydraulic transmissions. On the same day, Herr Krömer (Ministerium für Bewaffnung und Munition) told Krupp that in the future, less than half of the VK.45.01(P) production run was to be completed with hydraulic drive and over half with electric drives. By March 1942, Krupp had shipped 14 Type 101 hulls and 14 Type 102 hulls with plans to ship 2 more of each by the end of the month. On April 4th, Nibelungenwerk proposed that all 50 of the Type 101 hulls be completed by the end of June, with only a few Type 102 hulls completed each month through the end of June whereupon production would focus on the Type 102 hulls to be completed in July and August 1942.

By May 30th, things are beginning to become interesting with Krupp sending a lengthy letter to Wa J Rue(WuG 6) VIII with copies being sent to Porsche, Nibelungenwerk, Speer and Panzerausschuss, expressing the difficulty delivering the VK.45.01(P) hulls due to the numerous changes requested by Porsche.

The least of the complaints was that the work hall was never set up to produce Type 101 hulls exclusively and that it was impossible to completely switch over production to one type of hull in so short of time. Krupp complained that instead of the original 50/50 split, Nibelungenwerk had changed the plans to 90 Type 101 and 10 Type 102’s(May 8th) with the then (By May 30th, but date unknown) current demand by Nibelungenwerk to produce 44 Type 101’s and 2 Type 102’s by the end of May 1942 with one additional Type 102 in both July and August. All of the other hulls currently set up to be produced and Type 102’s were to be converted to Type 101’s by removal of internal fitting and changes to the outside.

By the end of the letter, Krupp expressed that based upon supplies and workforce that at best 33 Type 101 hulls could be delivered, with 16 in June, 16 in August and 9 in September, as well as the last 3 Type 102 hulls as the last 7 Type 102 hulls had already been delivered. Krupp also stated that this would only be possible if no changes newer then April 20th were introduced to the design so that the hulls scheduled for June could be produced on time. Any changes received by the end of May would be incorporated into the August delivery and changes by the end of June incorporated into the September deliveries.

On July 23rd 1942, Nibelungenwerk presented another VK.45.01(P) production plan to Krupp where by 30 Type 101 hulls, 10 Type 102 and 60 Type 103 hulls would be produced but nothing came about with the plan. Lastly in a July 1942 decision the 10 Type 102’s still planned to be produced were to be modified to meet submerging and fording capability. Production was halted completely in August 1942 due to design changes to suspension and engines and then delayed though September for lack of the newly designed suspension and engine parts. The original Type 102 plan was to have 10 Type 102’s completed by the end of May 1942… But the final Type 102 hull never left the factory until September. Total production from April to October 1942 of completed (turret, engine, etc) Tiger(P)’s (All types) was 10 out of the production goal of 76.

The Type 102 had, like the Type 101, two Type 101/1, 115mm by 145mm, V-10, 15.06 Liter, air-cooled engines. The Voith hydraulic transmission was coupled to the Type 101/1 engines and each engine drove its own hydraulic drive to a collector shaft which then connected to a combined forward/reverse and steering gearbox, which also accommodated an emergency low gear.

Control (steering) was hydropneumatic, the actual valves being controlled by the driver through levers that were pneumatic, with attached air/oil interchange cylinders. Although forward/reverse, emergency low gear, emergency control of the hydraulic transmission and the parking break were all controlled by mechanical rods and levers. The hydraulic transmission was normally fully automatic in function. Top speed was the same as the Type 101 at 35kph.

In the end only a single Type 102 was produced as Porsche reported on Febuary 17th 1943 that a Tiger P1 with hydraulic drive had been completed at Nibelungenwerk and only one hydraulic transmission/gearbox is known to have been produced by Voith. As to what happened to the other Type 102 hulls that were produced at various times I suspect that they were all converted to Type 101 hulls eventually. The reasons behind the delays to get the gearbox produced and installed are unknown as nobody thought to ask about it after the war when Porsche and Voith were interviewed.

Panzerkampfwagen VI P Sd.Kfz.181: The History of the Porsche Type 100 and 101 also known as the LEOPARD and TIGER(P) by Jentz.
Crowood Armour: The British Tanks 1915-19 by David Fletcher.