in this post, I’m going to present you a not quite known, yet innovative World War II tank development project, the Hungarian 44M Buzogányvető rocket laucher, mounted on a Toldi light tank.

First of all, I think I should write a quick summary about the 44M. Buzogányvető itself (pronunce: buzoga:ɲvetø, literally it can be translated “mace-thrower” or something like that, because it was named after the mace-shaped rocket it fired): 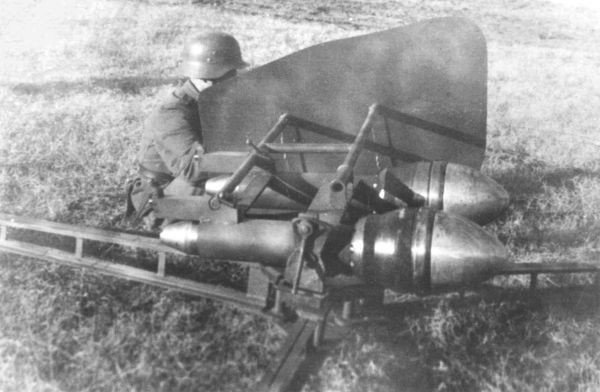 In 1942, to counteract the appearance of Soviet heavy tanks and the overall Soviet armor dominance, the Hungarian Institute of Military Science (HTI) started their own anti-tank rocket development. The other reason was, just like in some other cases, that the Germans were unwilling to share their top secret military technology with their not-too-reliable allies, such as the Hungarians. So the Hungarians were on their own with this problem.

- the 44M. 60 mm hand-held rocket launcher, a.k.a. “Páncélrém”, which was very similar to the well known German 88 mm Panzerschreck (more or less it was the copy of that, in smaller caliber), intended against average light and medium tanks.
- and the abovementioned, 100 mm 44M. Buzogányvető, which was developed exactly against heavy tanks and fortified bunkers.

Two types of this 100 mm rocket were created: the anti-tank HEAT rocket of the Buzogányvető was called ’Buzogány’ (= mace), and the anti live force HE rocket was called ’Zápor’ (= rainfall, shower). The first prototype Buzogány HEAT rocket was finished and tested in the Spring of 1944. The largest diameter of the rocket was 215 mm, and with the cca. 4 kg explosive shaped charge in it, it was able to penetrate more than 300 mm of armour or concrete. This means that this rocket was able to destroy any kind of heavy tank of that time at 500-1200m distance.

With this development, Hungary was the third nation, after Germany and the USA, who used domestically designed rocket launcher systems in the World War II, and the second, after Germany’s X-7 missile, to create heavy anti-tank rockets, which were used in action (even though it is not clear whether the X-7 was used outside test conditions or not). 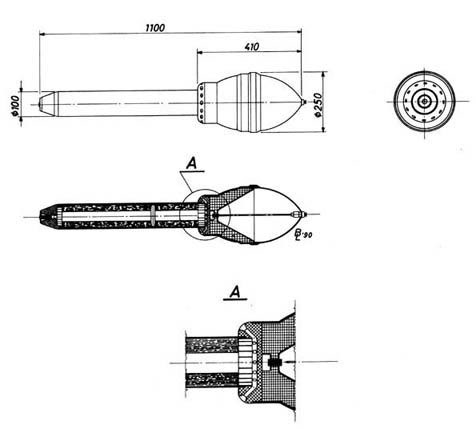 Above: The unguided ‘Buzogány’ HEAT rocket

Main features of the 44M. Buzogányvető:

Above: 44M. Buzogányvető with the three legged mount

The first 44M. Buzogányvető’s were mounted on a three legged mount (or tripod), however with this solution, the Buzogányvető was a bit difficult to move. But, because of the lack of production capacity and time, the HTI didn’t costruct new mobile platform/launcher for this weapon, they simply mounted the two rockets and the protection shield on the captured Soviet PM M1910 (Soviet-made Maxim) or SG-43 Goryunov machineguns’ wheeled mount, because the Hungarian Army captured plenty of them during the war. 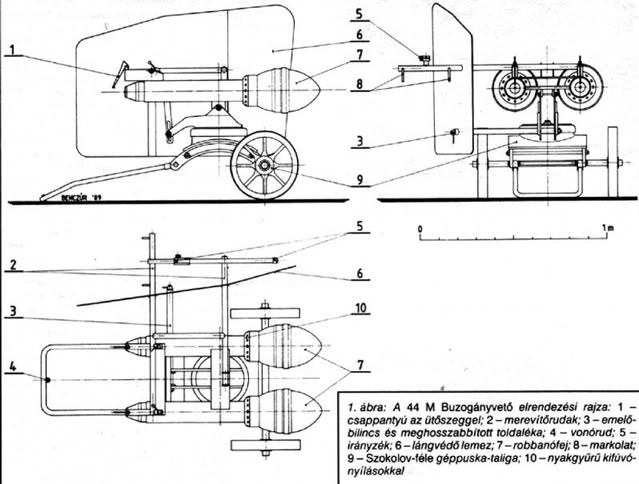 Above: The 44M. Buzogányvető on the captured Soviet mount

After the national-socialist takeover and the German occupation of Hungary after 16 October 1944, the 44M. Buzogányvető was renamed “Szálasi-röppentyű” (can not be translated, something like “Szálasi-flyer”) after the leader of the Arrow Cross Party, Ferenc Szálasi, in order to “increase the morale”.

However, the soldiers used the “Szálasi-röppentyű” term for every rocket-propelled gun of that era, so this could make a little confusion in the historical sources.

Approximately 600-700 Buzogányvető systems were manufactured in the WM Factory before in 20 December 1944, when Soviet troops captured it. Nearly all manufactured rocket launchers were deployed and used in the siege of the Hungarian capital, Budapest. 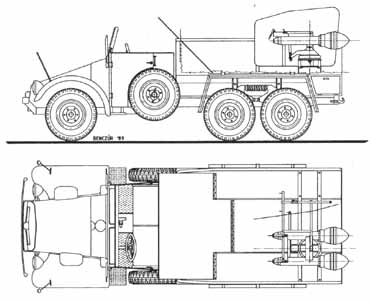 This rocket system was either operated simply from the ground, or from Krupp Protze, Opel Blitz or Rába Botond truck flatbeds and at least one was mounted on a Toldi II light tank. (That’s why I’m writing this post.) 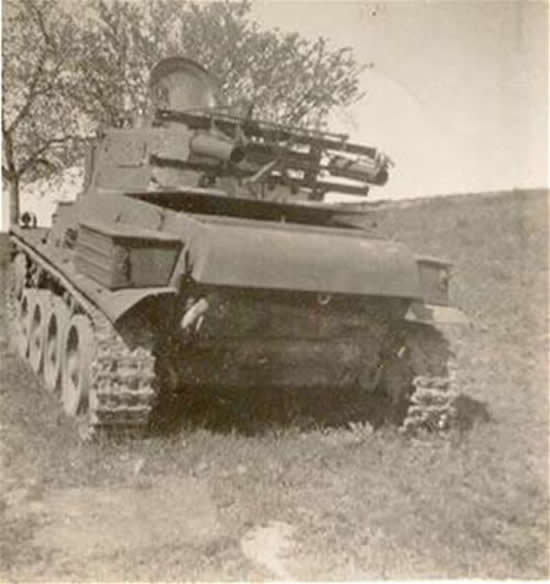 The picture above is the only proof that such a vehicle ever existed, since all other photographs and research data were lost during the war or after that, in the communist/socialist era of Hungary.

This photo is quite new for the Hungarian historians too, because it was known only since 2006, when the American Heather E. Nielsen, granddaughter of Marwin Albertema, uploaded this photograph to the internet. Marwin Albertema was an American soldier, served in the US 3rd Army, 691st Tank Destroyer Battalion, and he most likely took this photograph in Bavaria, sometime between April-May 1945. The exact location and time sadly are not known.

As you can see, the picture was taken by an amateur, and from an unfortunate degree, but many things can be seen anyway.

- First of all: the vehicle is clearly a 38M. Toldi II (B20) light tank, because the hull and tracks are indicates that this vehicle is a Hungarian made Toldi light tank, and the loop antenna of the first series Toldi I (A20), and the rear metal boxes of the Toldi IIA (B40) are missing from the turret.

- The main armament, the 20 mm Solothurn heavy rifle is missing.

- The size of the launcher tubes, calculated from the known measures of the Toldi is around 100 mm, which is the Buzogányvető’s size.

- It is clearly just a field conversion, as the engine hood is fixed in an open position, which is a bit dangerous in a combat situation. This solution however created the necessary horizontal flatbed for the 44M. Buzogányvető.

- The launcher of the Buzogányvető in this picture is empty (either before or after launch, if it was used at all), and a bit different from the original launcher. Looks like it was modified a bit with angle-irons.

- The rockets were too big (nearly a meter long and each weighted cca. 13,5 kg) to rearm the laucher from the inside of the tank, or from the doors. The Buzogányvető’s 3 men crew must get out from the tank to rearm the rocket launcher, or must be transported separately.

The following statements are based on Ádám Bíró’s (well known Hungarian modeler and historian) mock-up experiments.

- The Buzogányvető theoretically vertically could only move between 0° and +25°, but in practice this was reduced to minimum +5° (in frontal fire) and approx. maximum +8°, or else the rocket would hit the turret or the rocket’s backfire would most likely damage the rear of the tank.

- The horizontal movement was limited by the lenght of the rod between the turret and the launcher, it was approx. 45-45° on each side.

- These findings could mean that this experimental tank was not supposed to fire its rockets facing directly to the target, instead the tank might be rotated a little to one side.

In conclusion it can be stated, that this vehicle was most likely just provisional, but rather interesting experiment to up-arm the obsolete Toldi light tank as a mobile, all-terrain rocket launcher. But the experiments were stopped before they could made any successful result, because of the unfortunate late-war situation in Hungary. The later fate of the project, and that vehicle is unknown.

Other experiments with rocket lauchers on tanks

Before I finish, I must mention a bit questionable experiment too. 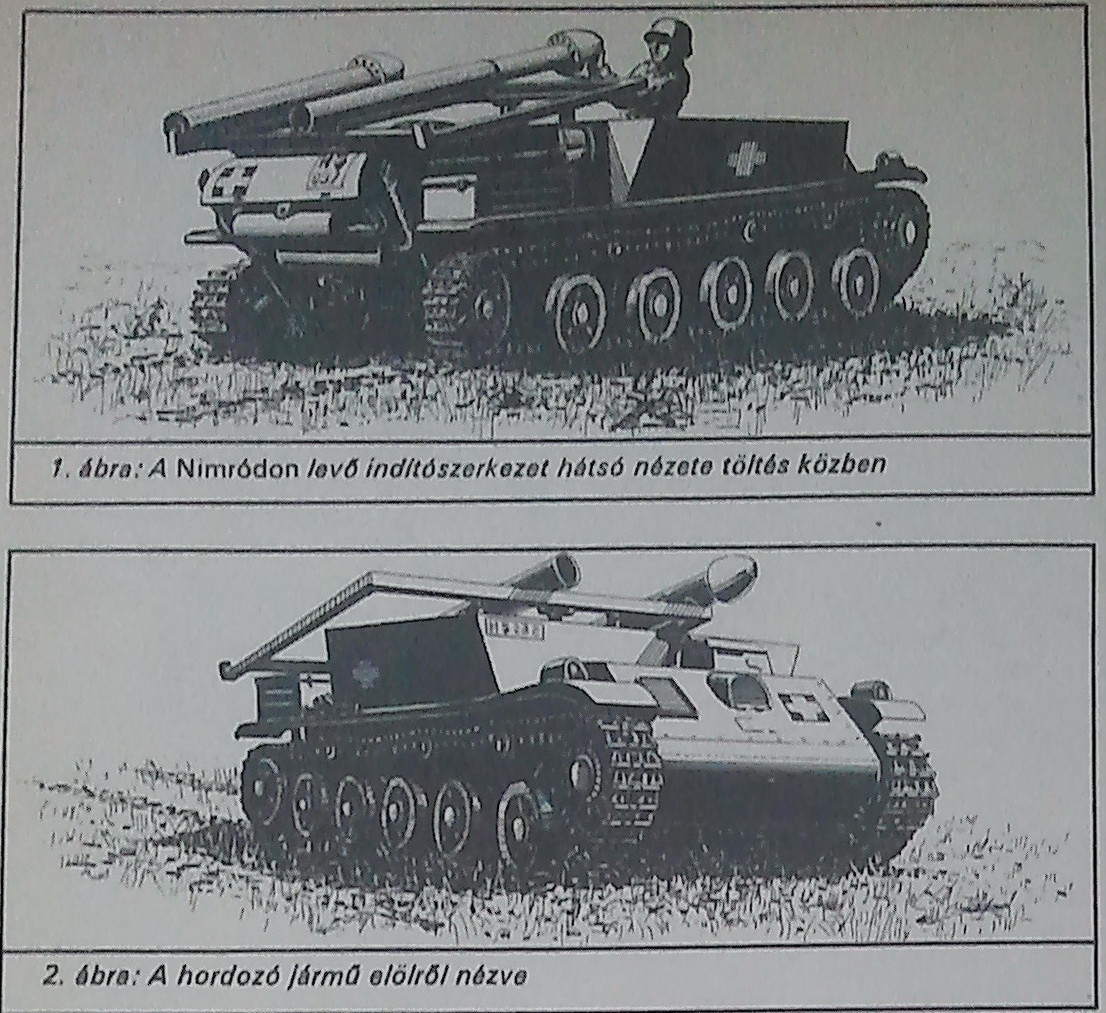 The picture above was published in the Hungarian ‘Haditechnika’ magazine in 1987. These drawings are made by an artist, and represent an experiment, that was about to mount the same 44M. Buzogányvető rockets on Nimród self-propelled autocannon chassis.

According to Béla Toronyi, who worked as mechanic at the workshop, where these modifications were made in 1944, 2 or 3 Nimród chassis were modified from vehicles that were damaged in action. Their turret were dismounted, and Buzogányvető rocket launchers were mounted on it provisinally, as you can see on the pictures above. According to this source, the vehicle was able to carry 15-20 additional rockets. Unfortunately, the modified Nimróds didn’t survive their second (?) battle, each vehicle was destroyed in action.

However, there are no written document or photograph confirmes this project’s existence except Béla Toronyi’s memories. 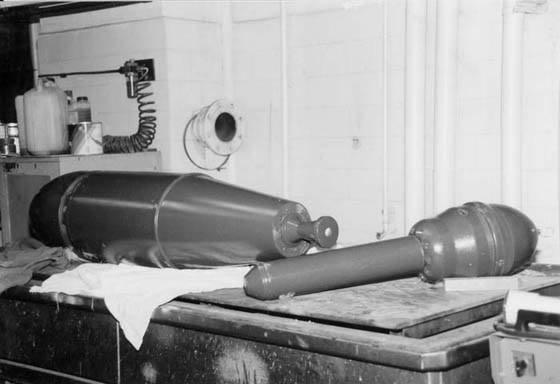 Above: Buzogány rocket, next to the Hungarian ‘Lidérc’ experimental anti-air rocket 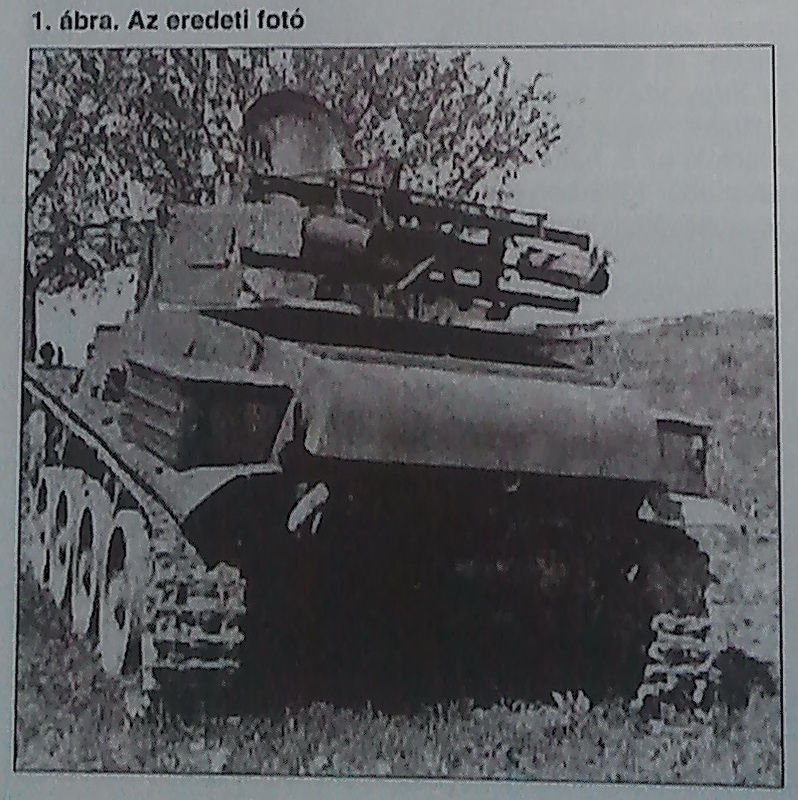 Above: Original picture of the Toldi with Buzogányvető

Below – drawings of the Toldi with the rocket launcher 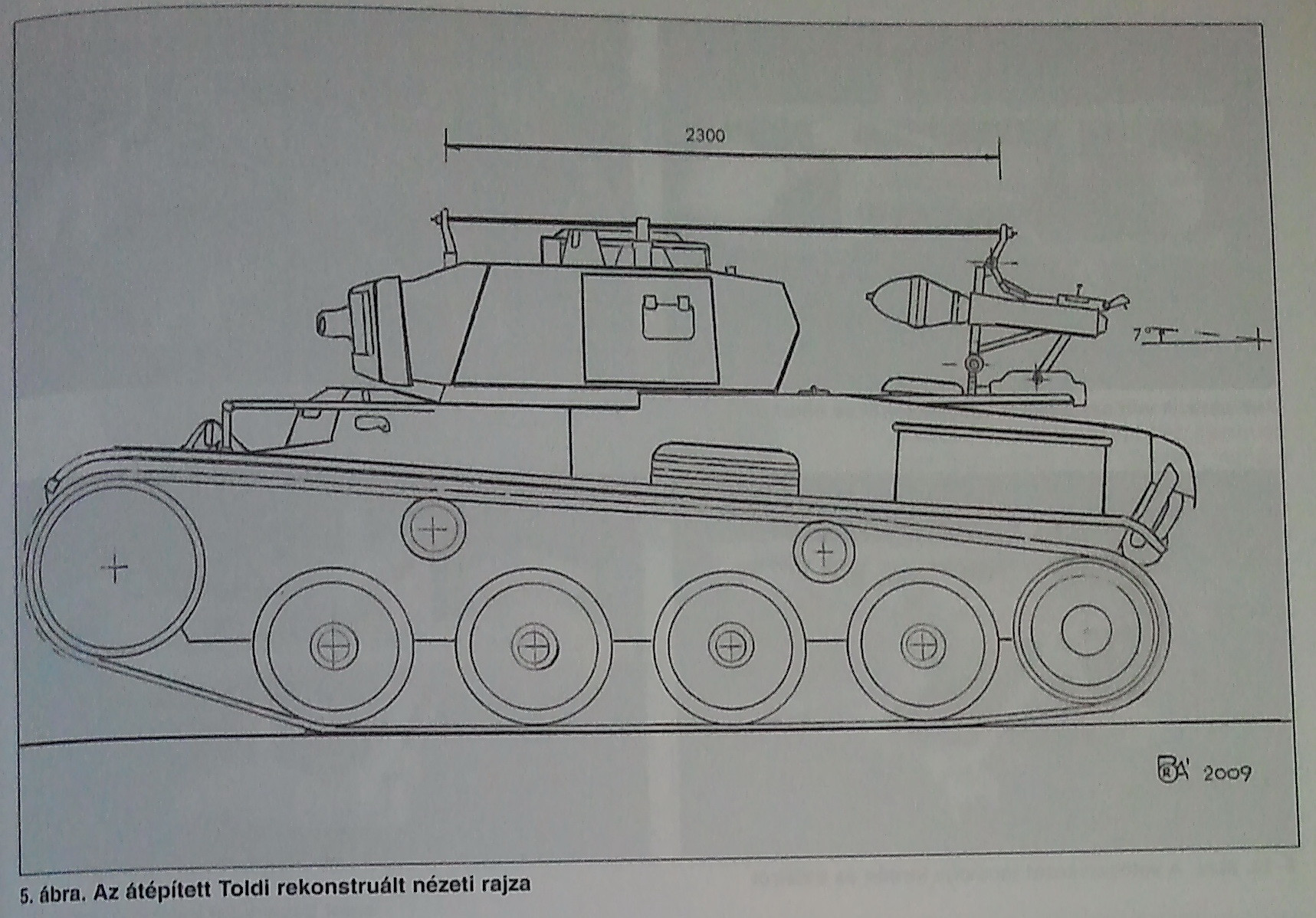 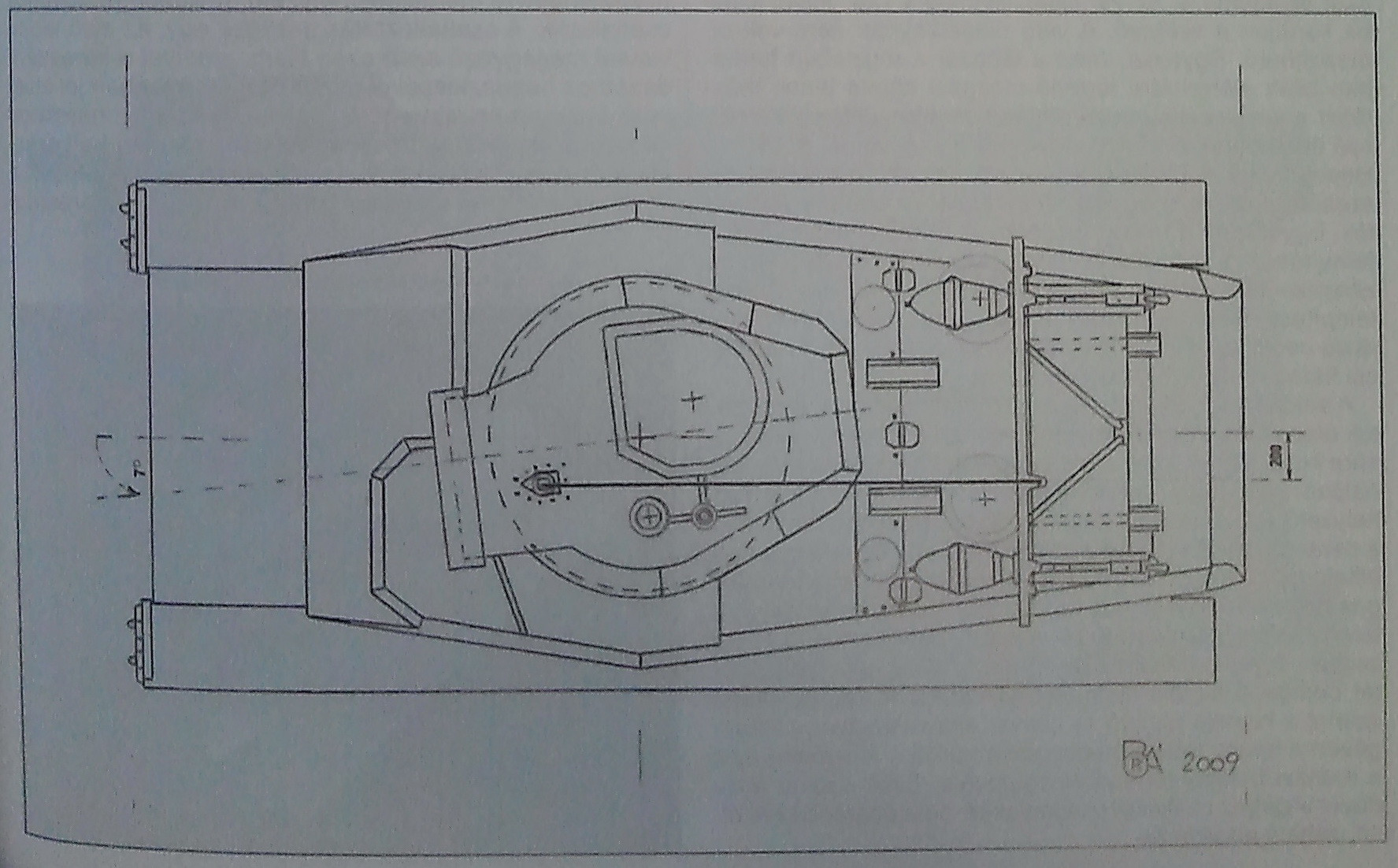 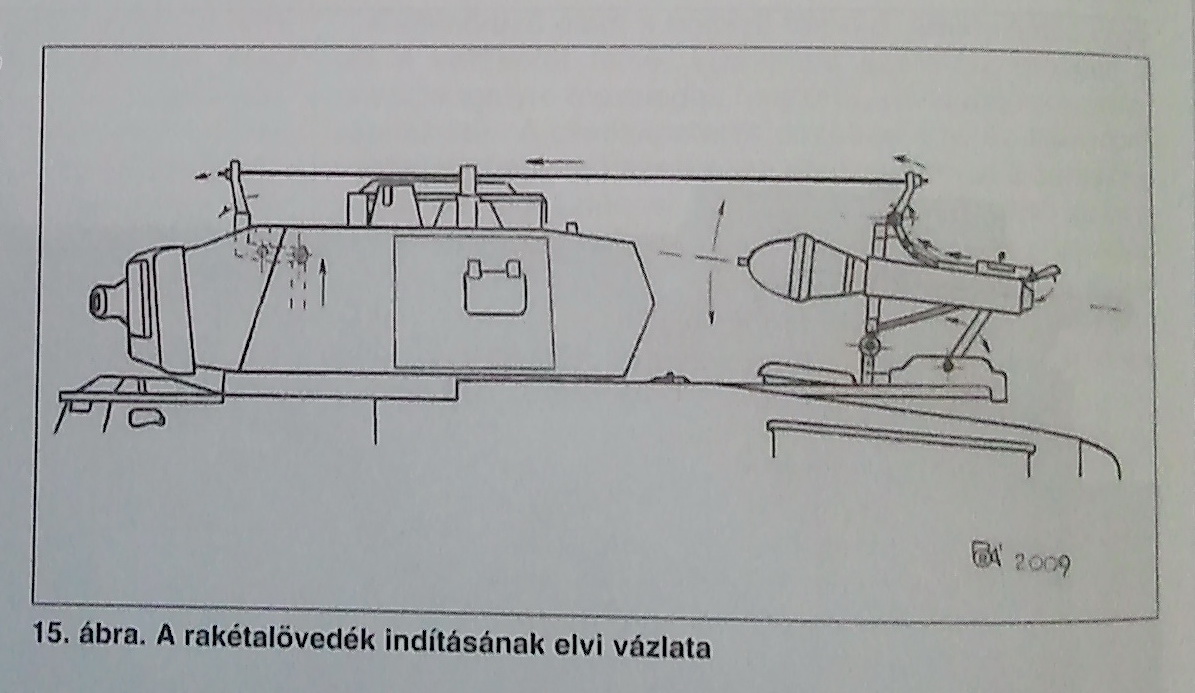 Below: Dimensions of the rocket launcher platform on the Toldi 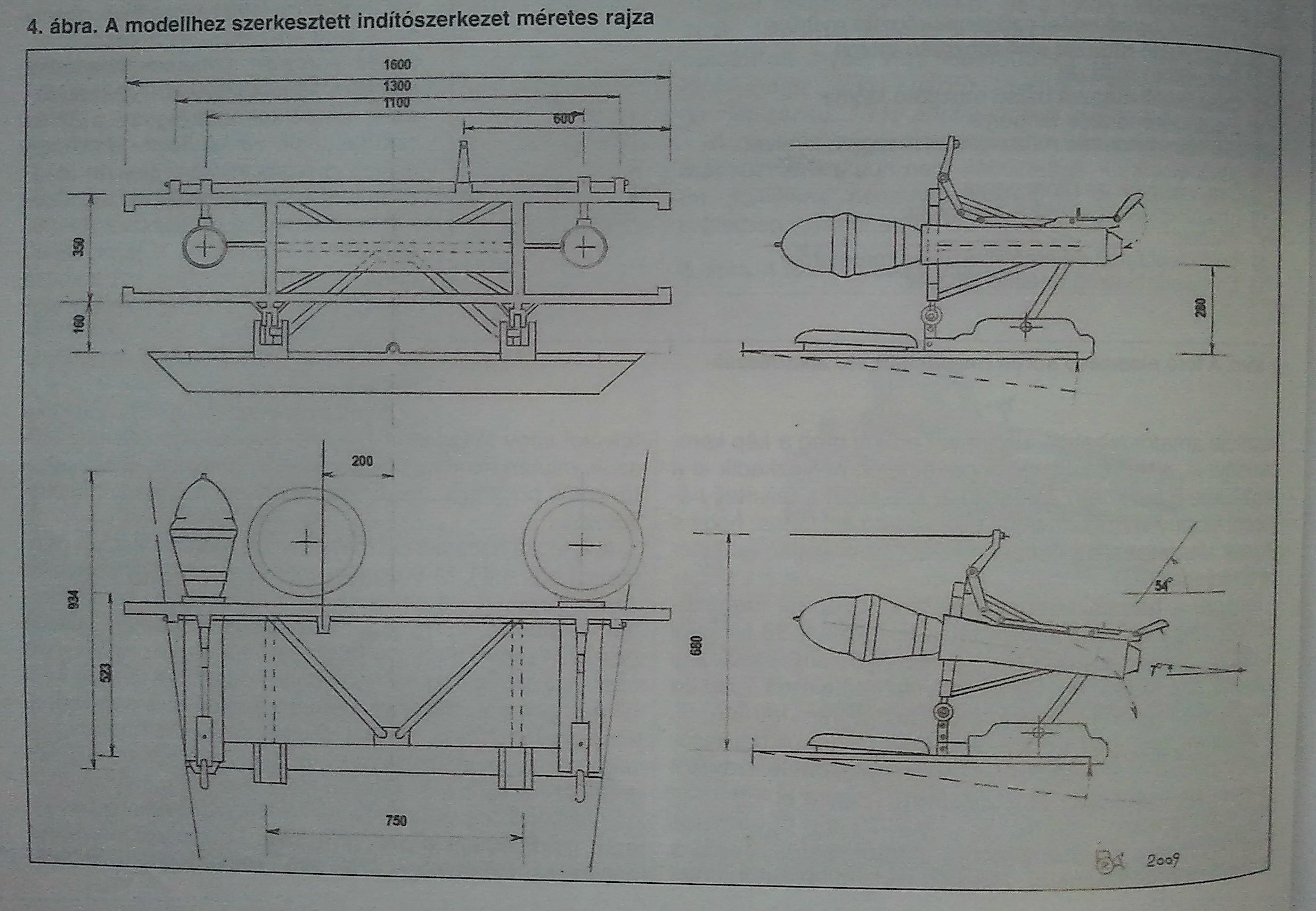 Below: A historically accurate mock-up, made by Ádám Bíró 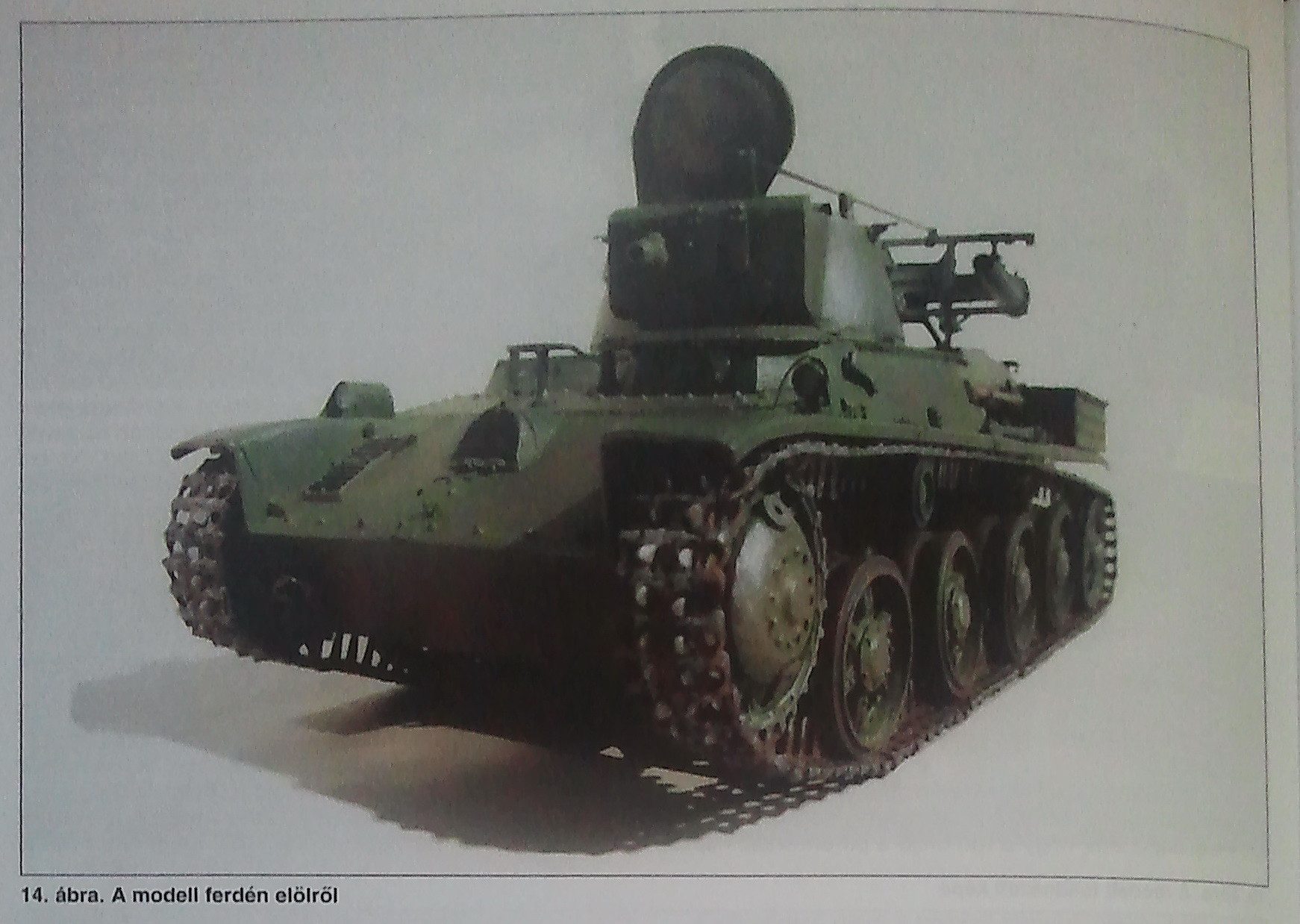