after months and months of requests and discussion, Wargaming EU has issued its stance on forbidden/allowed mods. Unlike the US server and RU server, both of which went with taxative lists of banned mod functions, Wargaming EU took a… different approach. 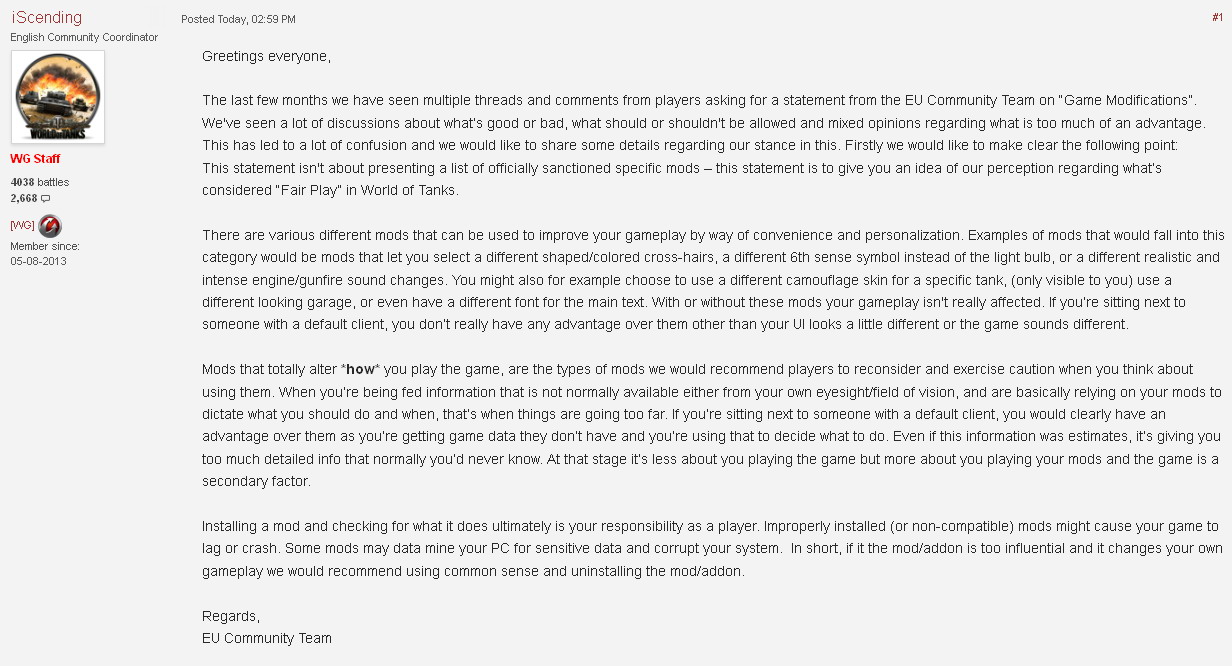 This has to be perhaps the most useless post I have ever seen, hands down (well, at least it doesn’t say mods destroy your hardware, like that idiot from support department). Let’s analyze this piece of text a bit. There is not a single sentence, saying that ANY mods are forbidden, including really nasty stuff. Obviously, this is a very destructive line of thinking and obviously, that much is not true, some mods are clearly forbidden. Which ones are forbidden for the EU server?

No modifications shall be created which, according to Wargaming.net, bring undesirable changes to the gameplay of Wargaming.net Games. The list includes, but is not limited to:

The points above are considered illegal on EU server and will generally be punished by ban, which is something the useless post doesn’t tell you. Back to the post. There is very nasty ambiguity in this post as well.

If we were to use the “rule of thumb” and “common sense” as to which mods are illegal (“those, that give an unfair advantage in battle”), we would get possibly strange results.

Let’s say I am facing two tanks – which do I focus on first – certainly, tactical situation has to be considered, but what about seeing the players’ quality and winrates? So – seeing someone’s winrate is illegal, eg. XVM and other such “noobmeter-type” clones DO give me an advantage, right? But they are not banned.

This is not a call to ban XVM, this is just an example of how the reality of mod banning differs from common sense. There are other such mods as well – for example, various “super zooms” allow you to aim very pricisely over the entire El Halluf, yet they are not banned either (at least according to EU support).

So yea… just be careful with what you are using and once again, don’t trust Wargaming to tell you what you are allowed to use. They won’t. They will just punish.

70 thoughts on “Official EU Mod Stance – Which Modes are Forbidden?”