I think that by now, everyone is aware that the World of Warplanes project ended in failure and Russian players are discussing, why did it actually happen. One of the more promined Russian community members, Dietolog (also a known troll, but this post is actually quite serious) wrote a post about this issue.

At first, he showed this graph about the WoWp RU attendance: 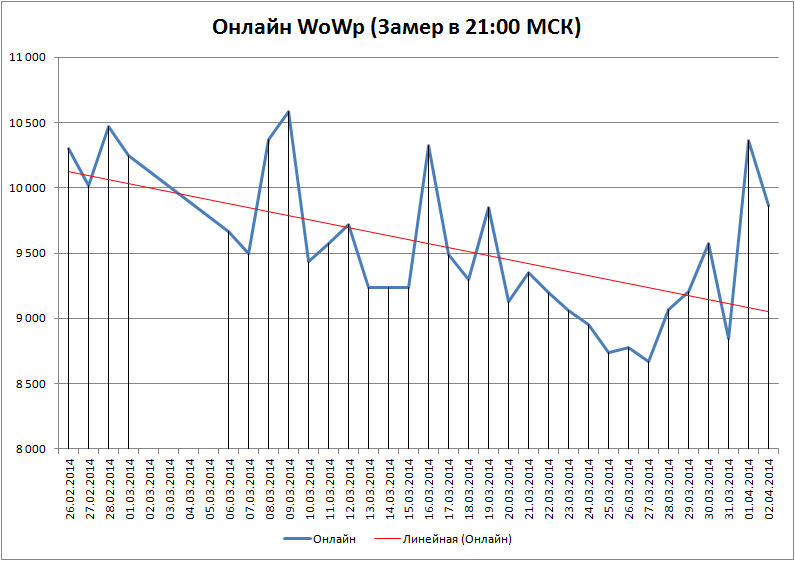 This graph represents the online numbers of each day (the red line puts it in average). As you can see, the tendency is quite clear. Dietolong names the following reason for WoWp failure:

- the maps are too small, the fact that the fights are quick on them does not mean automatically that the fights are fun
- the fights are monotonous: in WoT, there are multiple classes with different gameplay, but WOWp is basically reduced to fighters (light and heavy) and assault planes, where assault planes can work as “superheavy fighters” as well, so in the end, it’s like “World of Fighters”
- rockets reduce the characteristics of planes too much
- missing bomber class

There were more reasons, but some of the stuff I don’t even understand, because Dietolog uses some sort of incomprehensible-(at least to foreigners) and borderline-retarded slang (what’s with the MLP ponies o.O).

Either way, he proposes following solutions:

- make the maps twice as big so there is room to operate and maneuver
- implement bombers and assault airplanes (bombers relying on massive defensive firepower or speed)
- implement airfields, where the planes can land and recharge
- reworking ground targets so the battle can be won by their destruction

Or something like that. The most interesting part is that graph I would say…

126 thoughts on “Why is World of Warplanes a Failure?”